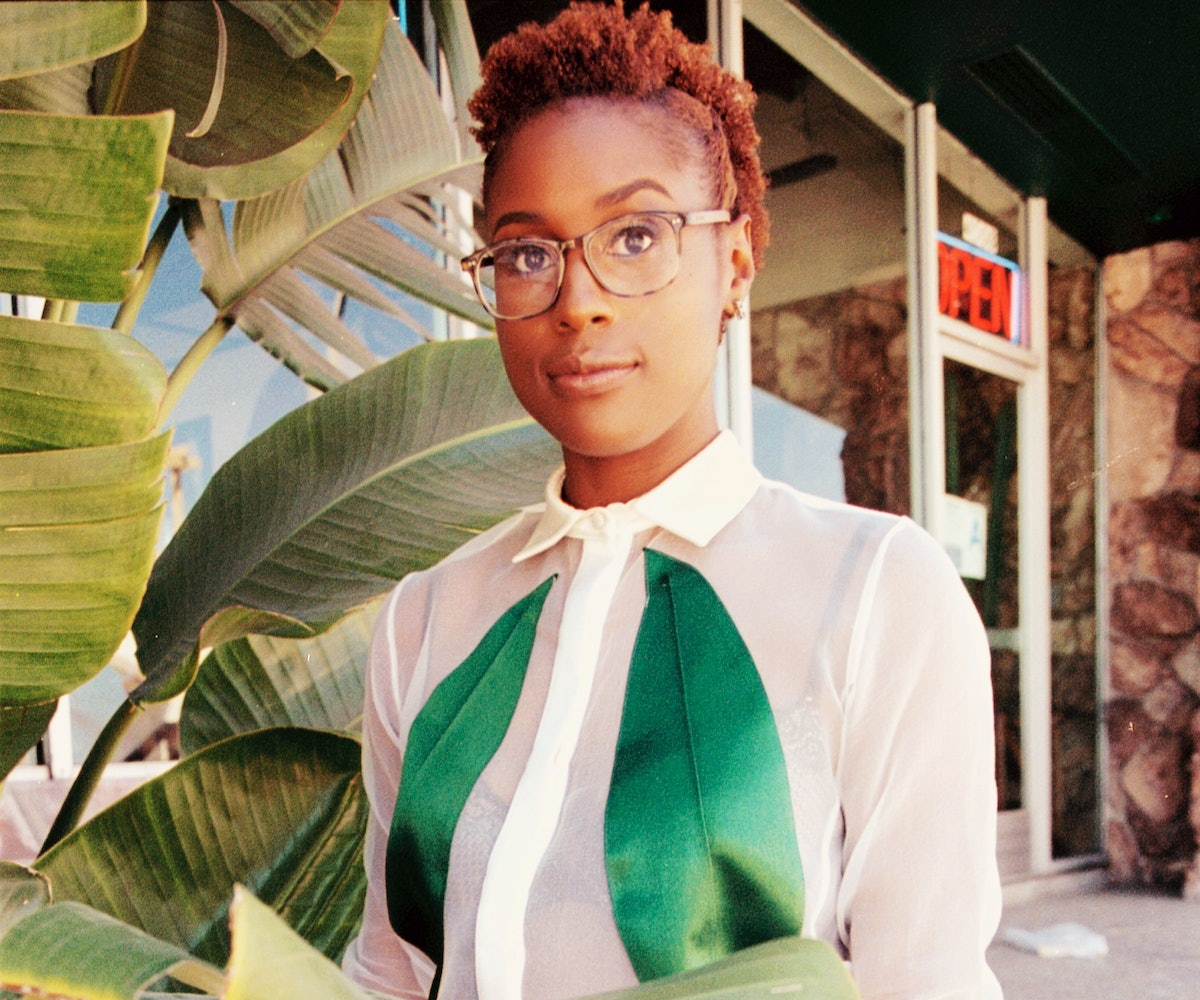 “I’m a boring person all day, and that will never change,” says Issa Rae with a laugh. The writer, actress, producer, and voice behind the YouTube sensation The Misadventures of Awkward Black Girl may be right, but from the outside looking in she’s anything but. Casually dressed in jeans and a T-shirt with the word “Inglewood” emblazoned across the chest, she sits down to chat in her Los Angeles office, which looks a lot like your best friend’s apartment, right down to the hot pink paint. “My favorite thing to do with my friends is to sit and talk about nothing, just like this—in their home, in my home, in a restaurant—it’s the best,” she says.

While millions already know Rae from her internet series, or as the author of the eponymous New York Times best-selling book it spawned, her fan base is about to blow up in a very big way. This October, HBO will premiere Rae’s new show, Insecure, which follows its main character—played by Rae—through the struggles of everyday life. Like Awkward Black Girl, the show hinges on Rae’s honest, observational humor, immediately relatable insecurities, and fumbling attempts to just be chill.

Growing up the middle child of five in Maryland, then Los Angeles, Rae says a lot of her work stems from her family, and from her experiences trying to fit in as a young black woman. “My whole upbringing was just me trying too hard,” she says. She wrote throughout junior high and high school, but didn’t catch the acting bug until college. “When I was a freshman this one girl wrote, directed, and produced her own hip-hopera,” she says. “I saw the work that she put into it and I saw what came out and I was like, ‘Wow, this is cool, and she’s only a couple of years older than me. She did this, and I want to do this, too.’ That caused me to produce and direct plays, which led to the first web series.”

She launched the first season of Awkward Black Girl in 2011 and it caught on almost immediately, earning co-signs and support from Shonda Rhimes, Kelly Rowland, Gabrielle Union, and Pharrell, who saw a kindred spirit in Rae and offered to host the show on his iamOTHER YouTube channel. Since then, similar kindred spirits have flocked to Rae online and IRL.“I attract people who are the same, so they get it,” she says about the fans who showed up to her 2015 book tour. “The best part was the reactions to my story about being a cyber ho. This girl came up to me in Chicago and was like, ‘Oh. My. God. I thought I was the only one! I used to have so many boyfriends that I used to IM all the time, and then my parents discovered it and shut all my computers down.’ It cracked me up because she got caught. But she was so excited to share that with someone.”

No doubt it’s a reaction that Rae’s about to feel from all sides, and one she’s steeling herself for leading up to Insecure’s premiere. “I’m spoiled in that when you create content for the internet you have an idea, you film it, you put it out there, and you know immediately if people like it or not,” she says. “We’ve been working on Insecure for a year and maybe 200 people have seen it. I’m just anxious for it to be released and for people to love or hate it. I’m trying to develop a thicker skin because I know with more attention comes criticism, and that scares the shit out of me.”

GET TO KNOW RAE:

Favorite Quote: “‘Give to the world your best and the best will come back to you.’ It’s my family mantra.”

Hometown: Windsor Hills, California. Rae first bonded with Insecure showrunner Prentice Penny—who replaced original showrunner Larry Wilmore‚ over his familiarity with the Los Angeles neighborhood. “I didn’t think I was going to be able to find another person to replace Larry, and I wanted someone of color—someone black, ideally,” she says. “And then I found Prentice and we realized we grew up in the same small neighborhood in L.A.”

Song: Stevie Wonder’s “Never Dreamed You’d Leave in Summer.” “Everyone has their moment of personal discovery with Stevie, when you realize he’s a genius,” she says. “Mine happened in college when I was illegally downloading a lot of music. I loved his classic songs, but I started wondering what else I could get and just downloaded a shit-ton of music. Since then I’ve just been obsessed, with his talent, with his writing.”

Zodiac Sign: Capricorn. “One of my best friends is a Capricorn and I can see our similar traits, so I definitely identify,” she says. “We’re stubborn, organized, ambitious—’Did someone shake their head at organized? Because I will fight you.’ We’re also very pragmatic, kind of no-nonsense, and loyal.”