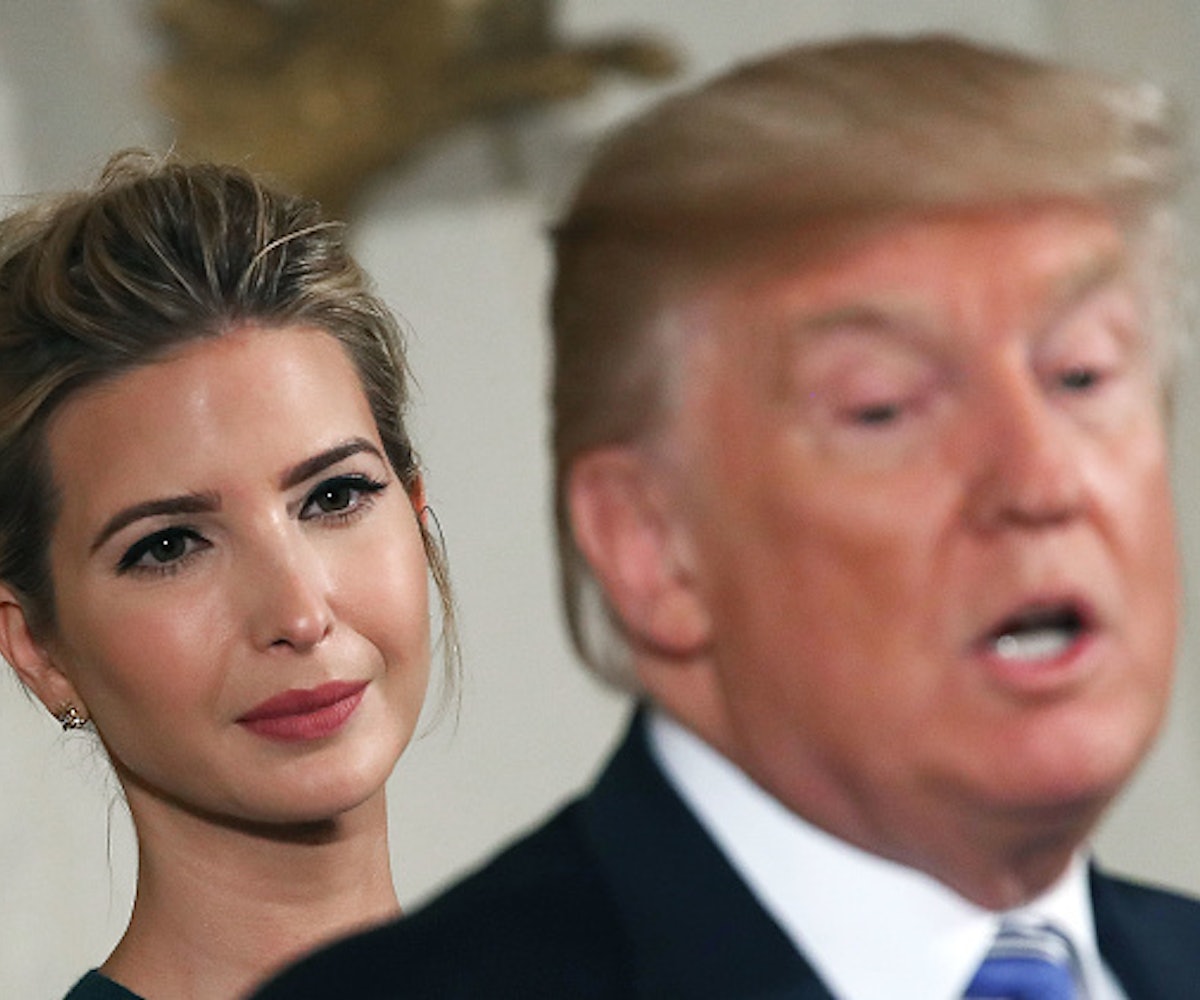 Ivanka Trump appeared on the TODAY show this morning, and her interview with correspondent Peter Alexander grew contentious when Alexander asked the First Daughter about the sexual assault allegations leveled at her father, Donald Trump.

Ivanka bristled when Alexander asked her, "Do you believe your father's accusers?" The president has been accused by more than a dozen women of various forms of sexual misconduct, including rape, but has denied any wrongdoing—and his daughter clearly believes him, rather than any of the women who have accused him.

Ivanka replied to Alexander: "I think it’s a pretty inappropriate question to ask a daughter if she believes the accusers of her father when he’s affirmatively stated that there’s no truth to it. I don’t think that’s a question you would ask many other daughters. I believe my father. I know my father. So, I think I have that right, as a daughter, to believe my father."

The reply is hardly surprising; though the wide smile employed by Ivanka as she answered the question was a little surprising, if not straight-up disconcerting, even if it's an ultra-practiced coping technique to deal with uncomfortable lines of questioning. But if Ivanka, and indeed all the Trump family, has demonstrated one thing since Donald first made his bid for the presidency, it's that her loyalty to her father is unwavering. And so, of course, she doesn't believe her father's accusers. Why would she in this instance, when she also doesn't believe the many, many attacks on his character and policies that come from millions of other people?

In her insistence that she believes her father because she knows him, Ivanka echoes Lena Dunham's recent (and later retracted) defense of Murray Miller, a writer on Girls who was accused of sexual assault. Beyond that, this type of defense is often a knee-jerk response by many people—women and men—who learn upsetting news about people they know—or thought they knew—intimately. It is though at odds with the "believe women" ethos of groups like Time's Up, which Ivanka has specifically claimed to support as recently as January.

But it is not merely Ivanka's defense of her dad that is interesting here. Rather, what stands out about her reply is that she calls Alexander's line of questioning "inappropriate." And perhaps it would be inappropriate for Alexander to ask, say, Tiffany Trump, who is a private citizen as well as Donald Trump's daughter (even if he sometimes forgets that fact), what her thoughts on these accusations are. But Ivanka is a government official, a senior advisor to the president. It is entirely within the realms of what is appropriate to ask such a high-ranking White House worker (even one who doesn't have security clearance) whether or not they believe the accusations leveled at the president. If Ivanka finds such things "inappropriate," perhaps she is then ill-prepared to handle a job which should inherently involve a level of dispassion. ("Perhaps," ha. I mean, she is totally ill-prepared.)

Beyond that, it is interesting that Ivanka's rationale about why she shouldn't have to answer this question is that she is the daughter of her father, as if that relationship means that she knows the way her father conducts himself with women who do not share their intimate bond. This "daughter of a father" defense is markedly similar to the way many men speak of only being able to be empathetic toward women once they became the "father of daughters." And in the same way, the "father of daughters" line is absurd, because men should, perhaps, consider that even women who are not comprised of their genetic material are worth respecting, the "daughter of a father" line is also ridiculous. Just because her father has treated Ivanka with respect and care throughout her life, does not mean that he behaves that way toward other women. In fact, there's ample irrefutable proof in everything, from the "grab 'em by the pussy" tape to the way he demeans political rivals like Hillary Clinton and Elizabeth Warren, that Donald Trump does not universally respect women. He doesn't even treat his other daughter with the same respect with which he treats Ivanka.

And so, much in the same way that all those suddenly compassionate "fathers of daughters" should reexamine their overarching attitudes toward women, it is time for Ivanka to reassess why it is she really continues to stay firm in her belief of a man who has shown over and over again that he does not respect women on the whole and, instead, just prioritizes the treatment of a select few. Because, does Ivanka maintain her loyalty to her family in the hopes that her father will succeed at the task ahead of him? Or is it merely another way for her to try and recreate a warped vision of the political family dynasty with which she's so obsessed?

NEXT UP
Life
49 Cool Things Under $30 On Amazon That Are Smart As Hell
Life
If You’ve Got Allergies, Picnic Could Be A Game-Changer — And It’s 50% Off Right Now
Life
Your June 2022 Horoscope Calls For Bravery
Life
Rosé Says She Doesn't Think BLACKPINK Will "Ever End"