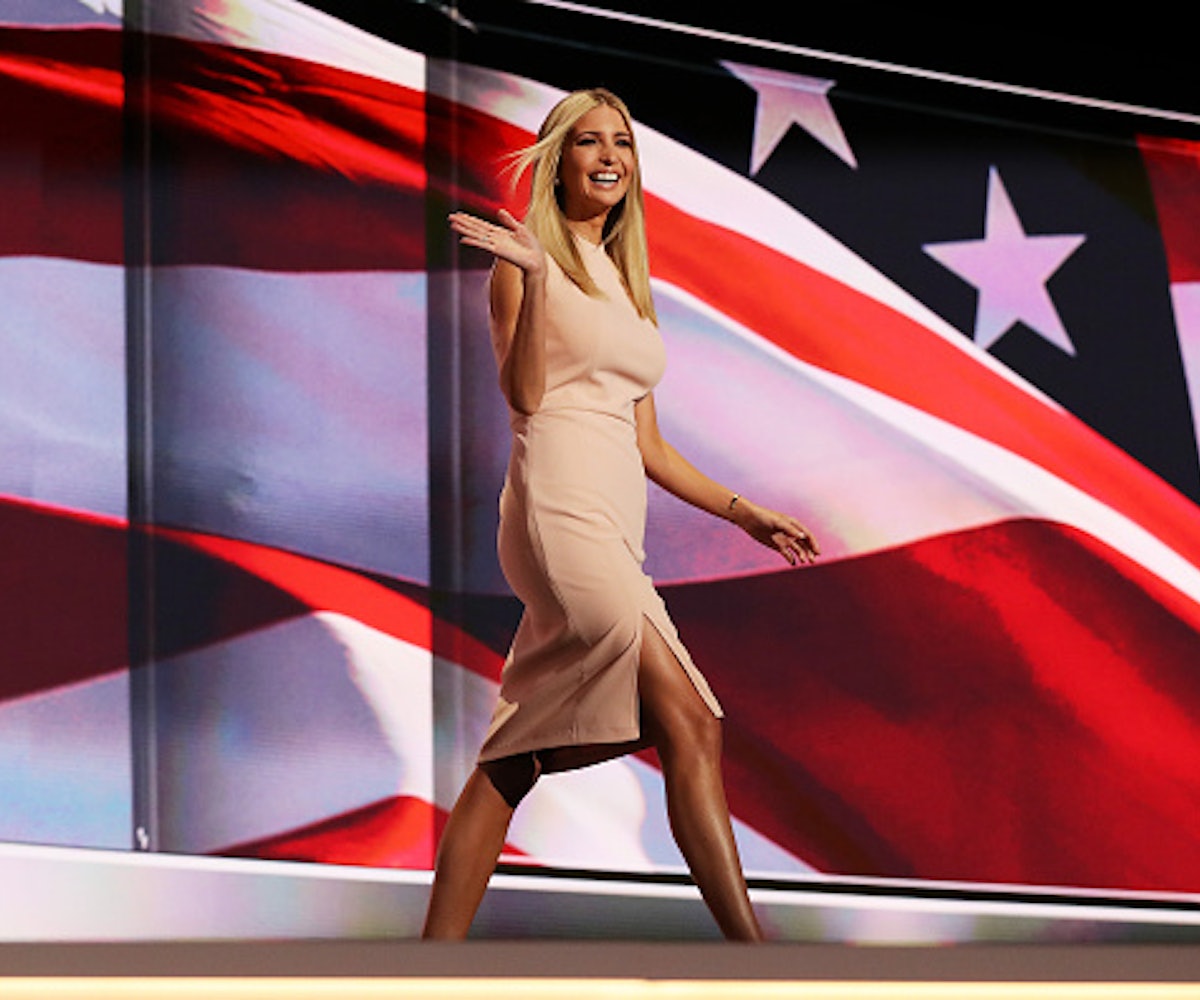 Since November 8, there has been no Trump whose words have been more scrutinized, whose behaviors have been more microscopically analyzed, whose emotions have been more investigated, than Ivanka. Sure, it might be her father who is president, but it is undoubtedly Ivanka who has captured the lion's share of the media's interest. And for understandable reasons, really: Ivanka instantly presents as being the most appealing Trump. She has none of her father's or brothers' boorishness, and she has better hair. She is not as inscrutable as Melania; and, as opposed to Tiffany, Ivanka actually has her father's ear. She also possesses many of the superficial characteristics which we are accustomed to seeing as simultaneously relatable and aspirational—her well-curated Instagram feed demonstrates the busy balancing act of being a working mother, and then there's that hair—making Ivanka an easy and frequent entry for people attempting to decipher the hidden machinations of the Trump administration.

What this has meant is an abundance of Ivanka-related think-pieces, with scores of political pundits attempting to figure out what exactly it is that Ivanka is doing behind-the-scenes at the White House to forward the liberal-ish agenda which she has espoused on at least one occasion. And then, more recently, with the release of her book (I use that word loosely; it's really more of a poorly edited collection of improperly used "inspirational" quotes), Women Who Work, the Ivanka-centered think-piece business went into overdrive, with more and more people looking for clues as to what the hidden truth about Ivanka Trump could possibly be. Is she clandestinely working toward forcing her father to be a touch less draconian with his immigration policies? Is she low-key attempting to adjust a health care bill that will increase women's pregnancy costs by over 400 percent? Is she busy reading up on what the meaning of "complicit" is? Really, though, what's her secret?

Well, there is none. The big secret of Ivanka Trump is that there is no secret. As if she stepped directly out of the pages of a Vonnegut novel, Ivanka Trump is exactly who she pretends to be. And who she pretends to be—who she quite literally is—just so happens to be a woman who could not understand the gravity and nuance of a Toni Morrison novel to save her life (and probably, honestly, doesn't care to) and definitely does not deserve the Rosie the Riveter treatment. Ivanka Trump is a nightmare for the women's movement in this country and for feminism, in general. Not dissimilarly to Kellyanne Conway and Taylor Swift, Ivanka would have people believe that women should never criticize other women, even though that's ridiculous, because some women, like Ivanka, are empirically bad, and working toward the legislated oppression of millions of Americans. The big secret of Ivanka Trump is not just that she sucks (although there is also that), but it is more that she isn't hiding it at all, and yet people are still digging around under all the shiny, glossy surfaces, trying to find some spark of humanity, some empathetic shred of goodwill that will result in policy that doesn't involve bombing another country, because so far, all we've seen of Ivanka's empathetic side is that it's given her father a twitchy trigger finger.

But while the secret to Ivanka Trump might be that there is no secret, what all this media digging into her psyche has revealed is something even more troubling than what lurks at the theoretical heart of Ivanka. What it reveals, instead, is the not-so-hidden secret of the media, that it is so desperate to find a savior in the Trump camp, particularly one as photogenic (that hair!) as Ivanka, that it will construct narrative after narrative centered around her and her potential for good, wasting time and space and effort all in order to prop up the idea that no woman this well-spoken, this successful, this blonde, could ever be all that bad. But she is, and the more time the media spends enabling the perpetuation of Ivanka's vision of herself, the more the media becomes as complicit in Ivanka's—and her father's—actions as she is.