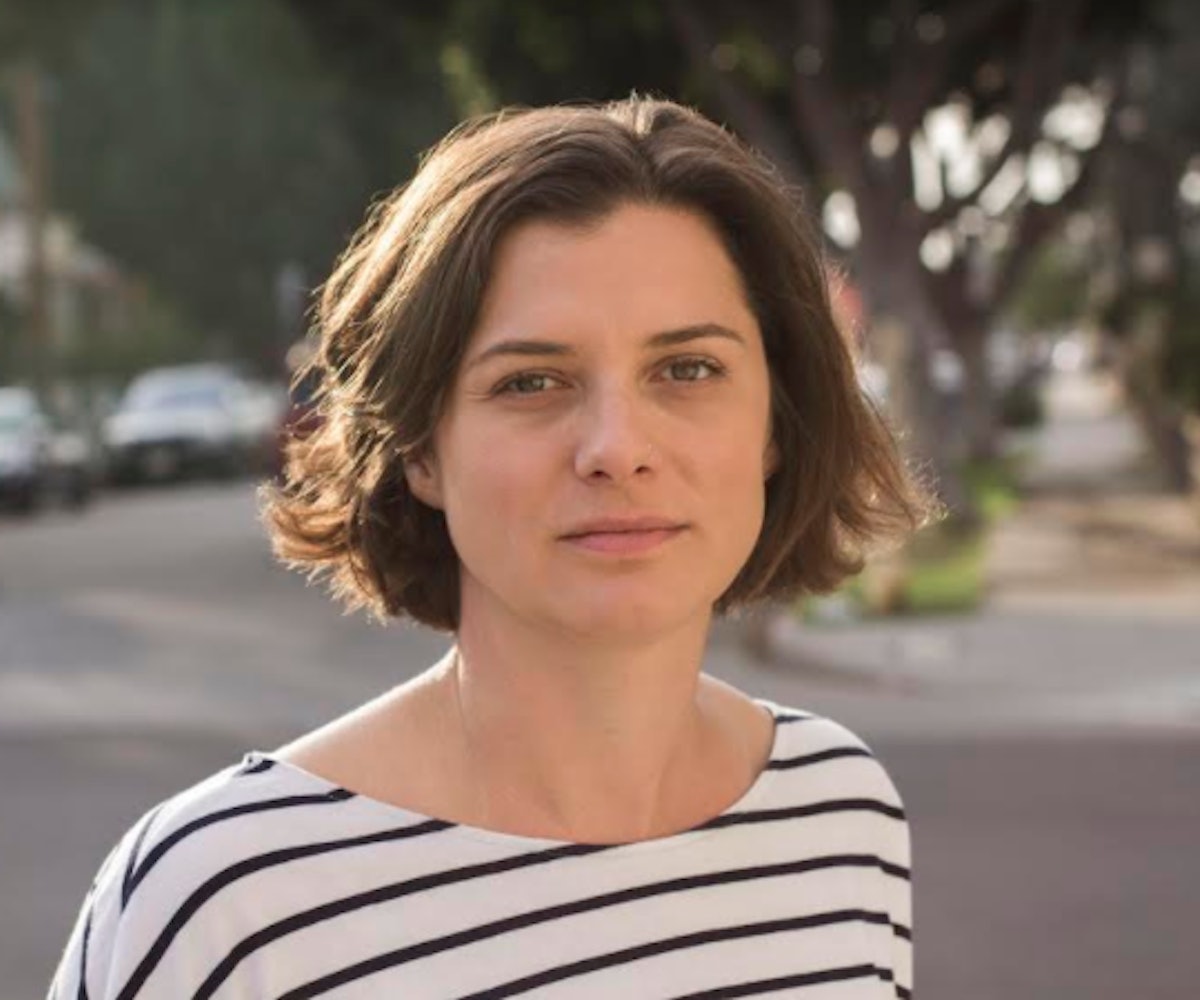 Ivy Pochoda's third novel, Wonder Valley, skips back-and-forth through time and space and takes the points of view of a handful of wildly disparate characters, all of whom are connected in one way or another, and all of whom are looking for some way to escape. In fact, getting lost and then getting found is a through-line in Wonder Valley, which poses questions about our desire to live off the grid, and reveals the dangers of not only doing so but also of staying too firmly within the grid's constraining boxes. It's a fascinating character study, and one of the most beautifully rendered examples of the spectrum of human vulnerability that I've read in some time.

Recently, I spoke with Pochoda about the book, her own experience (or lack of) with commune living, and about the dangers of ultra-charismatic leaders.

This novel has an incredibly strong sense of places, as it shifts between the desert near Joshua Tree National Park in California and Los Angeles, specifically in the city's Skid Row area. Did you know you wanted to write about these two areas?

I never intended to write about the desert. But when I started the book, I'd written one chapter that took place in Skid Row, and I had been out to the desert many times, and I was absolutely in love with it. I rented a house out there for six weeks and was writing out there, and I remembered... I teach a creative writing workshop in Skid Row, and one of the women in my workshop told me a story about growing up on a goat farm and how her brother had shot this hawk that their father made him eat. I was writing about Skid Row and sitting in the desert, and suddenly the two ideas just collided in my head. Suddenly, I realized that both Skid Row and the desert are places where people really live outside the rules of conventional society. They live off the grid, live an alternative lifestyle. So those two places became inextricably linked in my head. So that's why there's the back-and-forth between them; I realized that there is a certain overlap. Not everyone in Skid Row will wander out to the desert, but there is a certain person who lives off the grid who comes in from the desert and takes advantages of services on Skid Row.

Both those places, and Red Hook in Brooklyn, New York, where your last novel, Visitation Street, was set, have this sort of "making your own laws" quality. What role do those places fulfill for people who aren't really of them, but are compelled by them?

I think people are always drawn to places where the rules of society don't apply. More and more so in the world we live in, there's an urge to pull back from the real world and there are fewer places to hide. Two things are going on in my mind: One, people seem to be quite unhappy with the way the country is working, so are looking for alternative places to live. But also, in our world where technology and social media keep us all linked together, there are fewer places to hide from the world. I'm sort of interested in the way that Skid Row and the desert and, to a lesser extent but certainly, Red Hook allow you to hide in plain sight. To be in the world, but not of it. Or be of the world, but not in it, I guess. There's definitely an amount of freedom that comes in living in a place like the desert or Skid Row, and that's a really great thing to write about. The rules don't apply, and when the rules don't apply, your story can really explode.

Did you personally have any experience with the commune lifestyle?

I'm going to talk about this in a really roundabout way. So, I have a friend who grew up in a commune in Australia. And his father was a healer, and I went to visit them. And this is by no means based on these people whatsoever, like the content of what was going on in my story and my experience there. But I had been there, and I was fascinated by, for all intents and purposes, the commune that I visited, which was fairly normal. There were lots of artists, there was acupuncture... but you do sense that this sort of thing can easily go off the rails. I spent a week or so there. And you know, I knew a bunch of kids who grew up there, and they'd had interesting experiences, though I can't stress enough that there's no link between these two places in terms of what was going on. Where my friend grew up was much more of a real society, a functional place. But I did see how easy it would be for something like this to go off the rails. When I spent time in the desert, in 29 Palms, [California], where the book is set, there's just so much off-the-grid living, and it's so easy to abuse people and to abuse people's trust in a situation like that, where they're outside of their comfort zone, where they're living in the middle of nowhere.

And I'm also fascinated by why we're drawn to certain leaders. You know, what is compelling about someone? So the short answer to the question is, I had a friend who grew up on a commune, and he had an interesting reaction to it, both good and bad, and I've been out there, and there's no relationship to where I visited. I was sort of interested in the relationship between children and the place they grew up when it was sort of an unconventional setting like that.

It is a really unconventional location, out there by Joshua Tree. You really sort of do feel like if you walk 20 yards away from the house, you're suddenly on another planet.

I've been to the woods and the wilderness; I've been to the mountains. And my dad moved to New Hampshire and he lives in the country—and I'm not from the country, I'm from Brooklyn—but I've been hiking, I've done all this stuff. But I've never felt the sort of abandoned, barren, alone feeling that you get out in the desert. It's terrifying and exhilarating at the same time. I could definitely sense a commune out there creates a sense of like, there's a threat all around you from the landscape and the environment, so it makes the bond you feel with this group of people all the stronger.

It's actually kind of interesting to think of all the religions, certainly the main three monotheistic ones, born of charismatic leaders wandering in the desert.

I'm listening to this fascinating podcast about Heaven's Gate, that cult founded by Marshall Applegate where they all killed themselves in 1996. Definitely with that story, it is the same idea. A time and a place and a need can give rise to these sort of... you need the perfect time and the right people, and you can really sell someone on anything, it turns out. I think everyone wants to believe, on a certain level, and now when you've taken people out of their environments and out to the desert, they have no choice but to believe, because they've already come out there.

Especially in modern times, when being part of society involves being so reliant on screens and computers and sort of disassociated from anything that's natural or organic. Just by actually separating yourself from that technology after being so reliant on it, you become both really vulnerable but then also so free. It's intoxicating.

Right, exactly. I think vulnerable's a really good word. That's definitely what's going on. Patrick, the leader out there, has made these people feel vulnerable, but then he also is the healer, the solution to their vulnerability. He sort of saves them.

But it's not some simple binary, where the iPhone-free life is bad or good. It's a real mixture of the two things.

I think one of the things I was trying to explore is that all these characters, and all of us, for better or for worse, have made a decision in our lives that sends our life careening in a different direction. And all the characters in this book, they've all done something bad that sent them off the rails, on a path that's not necessarily working out for them and I think that's why a lot of them live off the grid. You know, they have made a choice that's sort of made them feel unwelcome in society, and the question is whether or not they want to rejoin society to make peace with whatever they've done. Are they happy? How do they move forward? So that's something I was really trying to get at, that's why everyone sort-of lives off the grid.

I think that that comes across really clearly, and that struggle to rebuild something or find a path again after you feel like you were knocked off of it, or knocked yourself off of it or whatever, it's a really important search.

It didn't happen to me, but yes, sometimes you hear a story, and it's just like, that's it. I didn't know what I was going to write and I heard that and was like, "Wow, I have to do something with that."