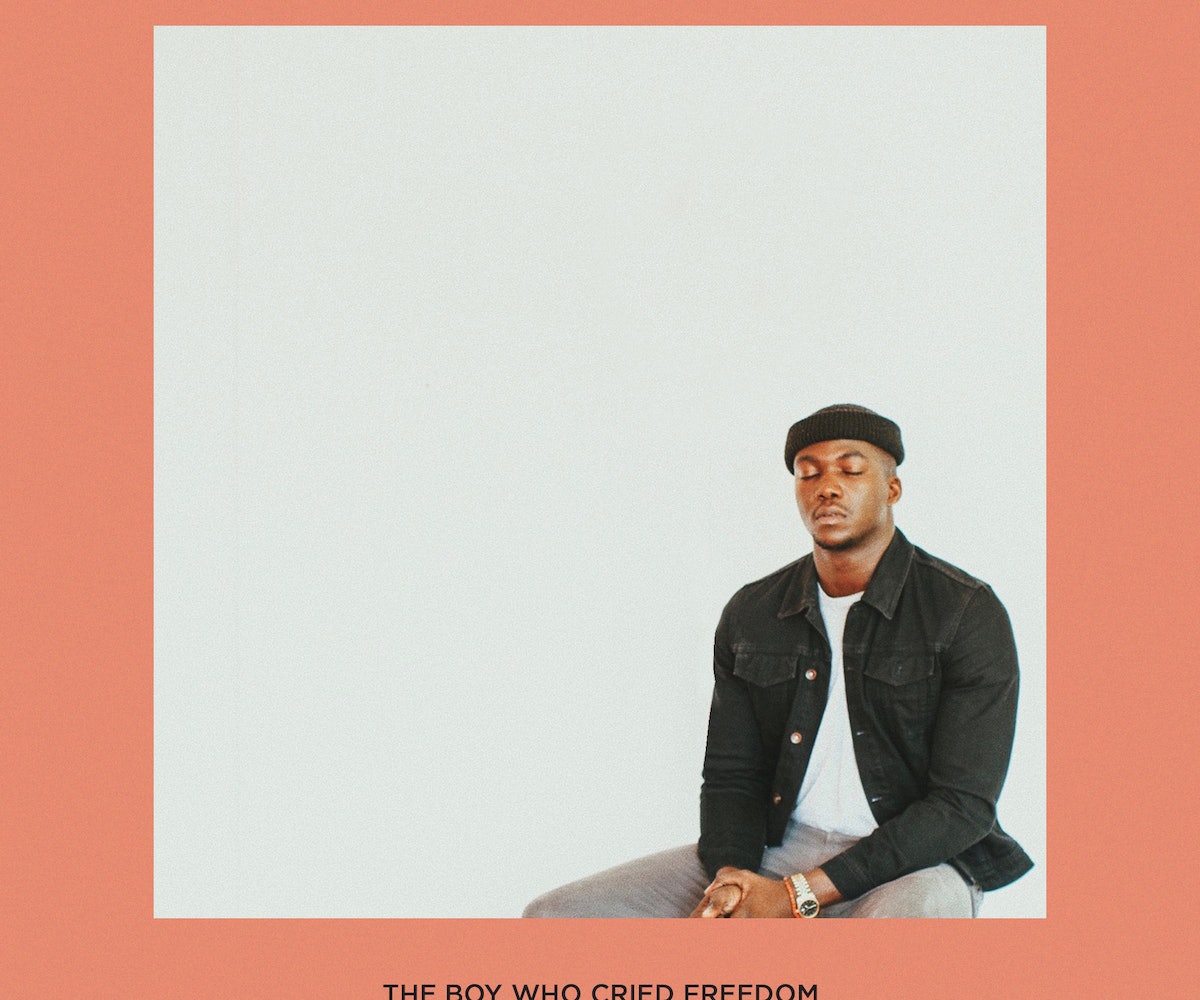 Every so often, a musician comes along with a voice that stops listeners in their tracks. If the two million views of Jacob Banks’ 2015 cover of “Say Something” by A Great Big World are any indication, the British soul singer is one such talent. His earth-shattering vocals—which should probably come with a warning for their potential to evoke tears—also characterize his original works: The Monologue EP, The Paradox EP, and now The Boy Who Cried Freedom, which dropped today.

The new EP gives equal shine to Banks’ voice and songwriting skills, highlighting his mastery of metaphors and imagery akin to that of a verified, contemporary poet. Not just anyone can open a song about ex-lovers becoming strangers by comparing their former relationship to the Chicago Bulls in 1993, but Banks does exactly that with “Empty Photograph.” It’s one of two simple, scaled-back tracks on the project, with the other being “Part-Time Love.” The previously released “Chainsmoking” and "Unholy War," as well as “Mercy,” amp things up on the other end of the spectrum, showing the range of sounds within Banks’ arsenal.

At just five songs, however, The Boy Who Cried Freedom is a bit of a tease—right when you’re hooked, the EP is over. Banks acknowledges this when we chat over the phone (on a particularly pivotal day for him: He’s just bought a Husky-Rottweiler mix that he named Eli), but he notes that his debut album is slated to be out this fall, so fans need not despair at the brevity of the work. If listening to the EP on repeat isn’t enough to satisfy your Jacob Banks craving, though, get to know the singer below, as we chat with him about his natural talents, knack for putting together IKEA furniture, and potential foray into directing.

I bought a guitar because I liked how it looked, and then I started to play just out of pure boredom. I’d just sing along to the riffs I could play. My friend asked me to come play open mics, so I would, and I started to write songs. My friends would ask if they could have the songs on a CD, so I’d go to my friend’s house the next day, and then we'd record the songs just so they could have them on a CD. That was a little over four and a half years ago. It all kind of just spiraled out of control since then.

Did you have formal training at all?

You make it sound so casual; there are people who have had formal training who don't have a voice like yours, so that is really impressive.

You usually get lucky, because I don't think you can choose your tone. When you try to sing, whatever voice comes out is the voice you are given. Actually, of all the things that I do, the act of singing is the least favorite of them all. I don't pride myself in how I can sing—if that makes sense—I just like to express myself. That could be through singing, that could be through writing a piece of poetry. It just so happens that nine times out of 10, my choice of expression is singing. But I don't sing outside of the stage, studio, and rehearsals. It’s not something I do on a daily basis. When I am not on stage or rehearsing, I'm not singing. It's weird.

It's interesting you say that, though, because people may gravitate toward you because your voice evokes a lot of emotion, but your lyrics themselves do, too. How have you developed your songwriting skills?

I love writing poems. I listen to a lot of poets speak. And then, I just tell the truth. I think my job is to help people get through the day a little easier. If I tell my truth, then more people can relate to it.

Are there any poets in particular who you admire?

There's a poet called Anis Mojgani; he has a poem “For Those Who Can Still Ride An Airplane For The First Time.” There is another guy called Miles Hodges of [spoken word collective] Strivers Row—they're incredible people. I'm trying to get them to do something on the album. I adore their poems so much, and how they can tell the truth and be so fearless because it's hard to tell the truth. They put themselves out there for people to pick apart, and they do it every time. I have always idolized their ability to do it.

What are some of the songs or artists and albums that you listened to growing up that you think really had an impact on your sound?

My Beautiful Dark Twisted Fantasy by Kanye West really influenced my sound a lot in the sense that he really challenged the norm of what hip-hop is supposed to sound like. Really, anything Kanye West [does]; he pushes the boundaries of what it is, and that was a really big one for me. Continuum by John Mayer—that album’s incredible. Voodoo by D'Angelo is one of the most influential albums for me.

You can definitely see the influence of those albums on your work—Dark Twisted Fantasy, in particular, because it works as a visual as well, and you’ve started to show your talent for visuals by directing your own videos, like the one for “Holy War.” Have you always had an interest in filmmaking?

I haven't always, to be fair. It happened because someone told me I couldn't do it, and I got pissed off. I didn't really get much love from the team I had around me at the time. I remember they said, “Your sound's alright, mediocre at best, and you just won’t be able to pull off [directing a video].” My chest was warm, and I was enraged. I was like, “Fuck you, I am going to do it”—that is always my message to everybody [who doubts me]. I had lots of friends who were into cinematography and photography, so I just worked with them on it. We just tried, just like challenges. I like for stuff to be difficult, and I enjoy the process of figuring things out. I’m a very hands-on person. If you ever need anything put together from IKEA, call me. I will fix anything.

Do you think you'd ever take things a step further from creating music videos and direct films?

I hope so. I'm a very visual person, so I love cinematography, I love film, and I love seeing how people put stuff together. I've thought about doing short films, outside of music, to just find a cool way to do something that I could share with people. I hope I get a chance to explore outside of Jacob Banks the musician, but I want to be able to do it with no pressure and just learn on my own.

Even though you started creating music relatively recently, did you always see yourself being in a creative field? What did you imagine yourself being when you were younger?

I hoped to be a pilot for a while, and I wanted to be a civil engineer. I actually graduated from university as a civil engineer, but I never really liked it. I was just doing that because I thought it would make everyone happy, which it did, but it just made me sad and depressed. I used to want to be a dancer for a while, too. I've always been more of a hands-on person. That much I knew about myself when I was kind of lost and trying to please everyone around me and just not let anybody down. I never got near creative fields, apart from the dancing. That world never struck me until music. I make music really because it makes me happy. It gives me so much joy to be able to express myself and talk my shit.

A lot of people of Nigerian descent are pressured to pursue law and medicine, and their parents would be disappointed if they were interested in a more creative career. Did you experience that?

Yes. But my parents come from a place where education guarantees success. They come from a land where, if you have a degree in something, you're guaranteed everything. In my world, education doesn't actually guarantee that much. It's hard for my parents to wrap their head around that. For a long time, I didn't get it, but then after a while, I just said, "I want to do what I want to do, and you need to have faith. I'm gonna go do it, and, hopefully, you get to see it turn out." That's just kind of the idea, and now they're able to, and it was never really too difficult. I understand that place. Of course, it’s your job as a parent to worry about your child, and being a musician is not a secure place to be. So I get their fears, but happiness prevails. It's way more important than being successful. I think happiness should be a measure of success.

You’ve described your sound as being “digital soul.” What do you mean by that?

Soul is a genre that, in the sense of black culture, doesn't really take many forms. Now being in the digital age, what I do is try to introduce sounds that aren't really synonymous with soul. I'm not trying to be Marvin Gaye or Al Green or anything. I'm trying to be Jacob Banks, and Jacob Banks likes Al Green just as much as he likes Frank Ocean or Kanye West.

How far along are you in the production of your album?

We're about at 80 percent. But it's quite different than the EP. I try to never make the same project twice. I'm always trying to find my sound and try a new technique because I get bored, and I feel like if I'm bored, the listeners will be bored. The album's called Village, and it’s named after the phrase, “It takes a village to raise a child.” It just talks about everything that I've welcomed into my life that's made me who I am today.

Do you have any collaborations on it that you're excited about?

We're working with Ryan Tedder, which is dope. But it's mainly just the homies. It’s such a blessing to be able to make an album with your friends. It feels like back when we used to make music in someone's basement or bedroom. To have the same people making an album together, it's an incredible feeling. Sometimes I feel like I’m dreaming.

I hope I’m inspiring people, more than anything. What I'm trying to do is contribute to the music, push the meter, ask people to try things that they would never try, so I hope to inspire the people who are brave enough to try something different.