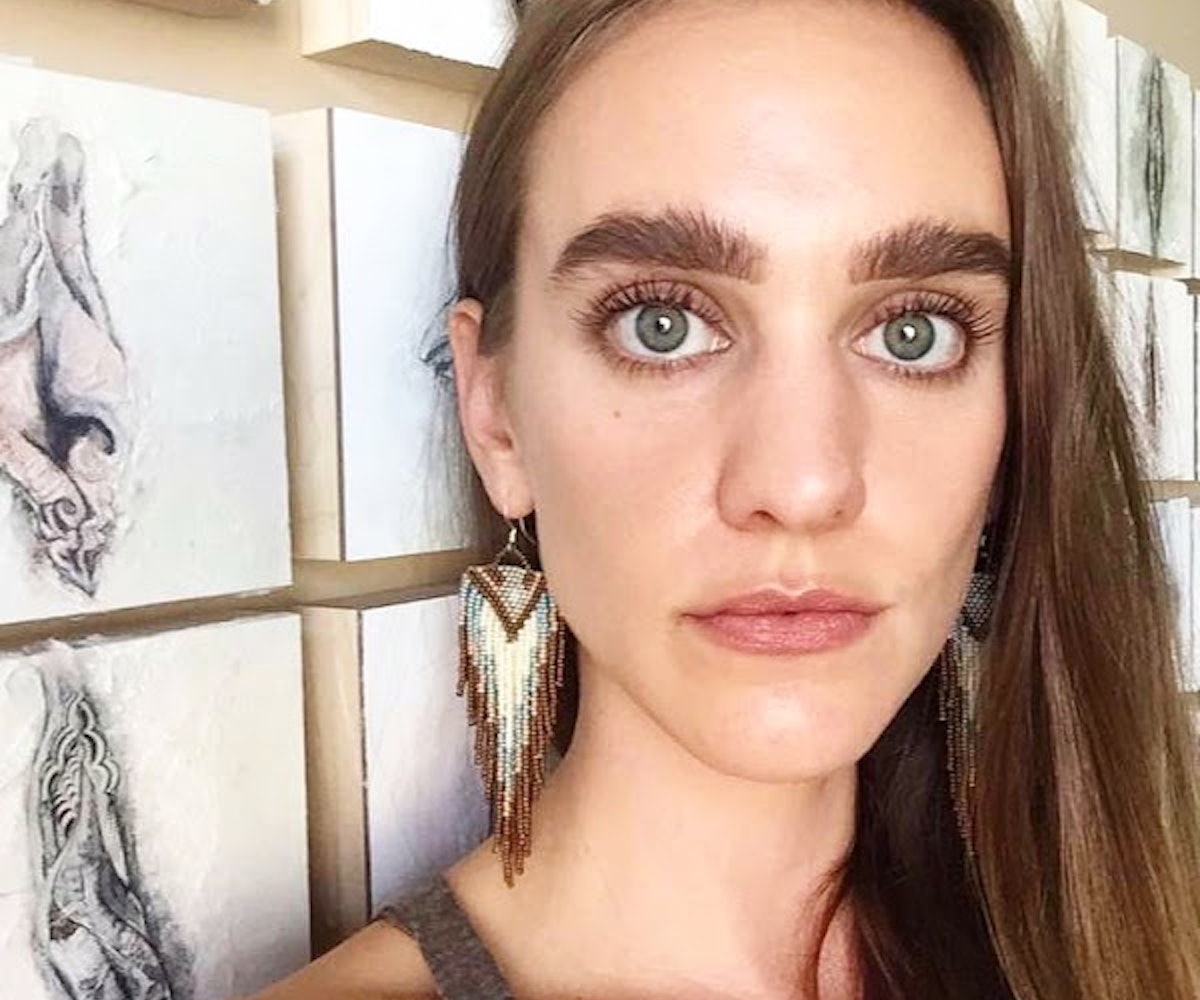 When we look at ourselves in the mirror, we might see things—acne, wrinkles, hair, freckles—that we wish would go away. But for the 2 percent of the population who suffer from body dysmorphic disorder (BDD), the tiniest of flaws can have devastating consequences. A body image disorder is characterized by an obsessive concern over one or more perceived flaws in appearance, and BDD is a frustrating, exhaustive condition that leaves people with feelings of shame and self-hatred about the way they look. Some cover up areas of their body with clothes, hats, or makeup. Others spend hours staring in the mirror. BDD is an often under-recognized and underdiagnosed condition; outside of genetics, the constant barrage of criticism towards women's bodies and the never-ending judgment of women's appearances can contribute to its development, making it all the more difficult for people to cope.

For Jacqueline Secor, a mixed-media artist based in Salt Lake City, Utah, some relief was found with the stroke of a brush. In her "Diversity of Nature" series, a gorgeous collection of unapologetic and empowering vulva paintings, Secor channels her emotions about her body into lush, pastoral landscapes that capture parts of women's bodies that have been stigmatized over time. After leaving the Church of Latter Day Saints, where she struggled to conform to its narrow definition of beauty, Secor found that painting allowed her to accept herself as she was, and fueled her desire to promote the inherently political message that women should never be ashamed of what they look like. “Painting vulvas," says Secor, "[and] focusing on details of women’s bodies, even the parts that are ‘supposed’ to be hidden, does sometimes feel like a small act of resistance, a way of saying that women don’t need to hide, that we deserve a place, not just in the art world but in every sector.”

Ahead of her New York debut at the Tribeca-based group exhibition, Secret Garden, which opened this week at the Untitled Art Space and is on view until July 30, we spoke with Secor about her struggle with BDD, the power of painting vulvas, and the importance of body acceptance at a time when the fate of women's health care is more relevant than ever.

When did you decide to put yourself out there and start painting?

I graduated in 2012, and I hate to say this, but school really made me not like art. I wasn’t able to paint what I wanted, and I didn’t really learn a lot. I learned a lot about art history, but, in terms of cultivating the actual artistic voice, I felt like there were a lot of restrictions. And then I got really sick. In 2014, I actually went into a mental health facility; once I spoke to a lot of the women in group therapy, I realized I wanted to start an art series. There was a connection I felt with the other women where many of us felt bullied, especially in our private parts. I was thinking about doing figures, but then I thought, Oh, I’m just restricting myself. That’s not really what I want to do. Then I thought about it, and I realized I wanted to paint vulva. At first, I was painting myself, and then my sisters saw my work, and they all wanted to be models, too. Then I had friends interested, and friends of friends, and I started posting my paintings on social media. After that, people from all over the world started contacting me and wanted to contribute to the series. It was probably in 2014 when I started painting myself, and it was in 2015 when I started the series and put out an open call for models.

From what I’ve seen, you like drawing vulvas as landscapes. Is that what you see when you’re painting?

Indeed. I’ll also turn my images down, and it creates a whole new landscape. I paint underneath the vulva but I also paint the mons pubis, so when I turn those upside down they look like erupting volcanoes. I’ve shown my work in places where people go up to the paintings and actually scream when they realize what they are. That was when I first showed my paintings in Utah. But I’ve been welcomed to a few galleries in Utah. A Mormon gallery even showed my work when they were having a feminist book release.

Did that reaction surprise you?

It was really surprising. I went to the gallery sweating because I was so nervous. But after that, it really pushed me to reach out and not be afraid. I felt so confused and conflicted when I moved to Utah, and I feel like the series really helped me to reclaim my body, my voice, and my power. It was nice to have other women tell me they were happy I was doing this. I’ve had sex abuse victims come to me and say they hated their bodies, but when they saw the series, they felt like they could take ownership of their uniqueness and not feel so ugly. It’s so sad that there are these stigmas surrounding the vagina. Our society has created a whole culture around what our vaginas are supposed to look like.

Do you think growing up in a Mormon environment made it difficult to view your body in a certain way? Do you think it contributed to your BDD?

I definitely feel it was genetic. My family has a history of anorexia and BDD and OCD [Obsessive Compulsive Disorder]. But I think it was environmental when I moved to Utah because I was in an unhealthy environment. I didn’t conform to the Mormon standard, so I felt like I was doomed from the start. It was when I was in a pretty unhealthy relationship that my insomnia kicked in. I spent a lot of time in front of the mirror because I couldn’t sleep. I had a lot of time to dwell on stuff. I started to pick at my skin, and then time would pass, and I would realize that I had all these self-inflicted wounds on me. I wasn’t myself. I knew I needed help, but my health insurance was so bad that I couldn’t find a therapist that would take me. I had to pay out of pocket. So when I found a place, they helped with my sleep and they put me on a lot of medication. When one wouldn’t work, they’d put me on another one to help with those side effects, and then I became really overmedicated.

When I got out of the unhealthy relationship, though, I got off of the medication and I started this series as a way to cope. I needed to get out of that unhealthy environment that enmeshed me with really toxic people who made me feel guilty for not conforming to the Mormon ideal woman. But once I got out, everything was better.

Did painting lessen the symptoms of your BDD?

It really helped. When I paint, it’s the only time I’m not anxious. I remember being really sensitive to comments. Someone would say something about my body, and while most people would probably brush it off, I would sit there and think about it obsessively. That’s what’s so sad about bullying: The person saying the stuff doesn’t think twice about the things they say, but the victim is left thinking that it’s true. They believe they look that way. I have these rituals I do, to not get distracted, because if I get distracted, I’ll end up not getting things done. I’ll clean the whole house or get in front of the mirror and start inspecting. I always feel like I have to wear a turtleneck or long sleeves to not have to look at my arms and see things that aren’t there. I don’t even realize I’m doing it, and then an hour will pass, and I’ll be like, Oh my gosh, what have I even been doing?

It’s hard to break that cycle of negative thinking.

When I was really sick, I would pick and I wouldn’t leave the house, or I would put on a lot of makeup. I would sit in front of the mirror and paint my face to cover everything up, but it hurt. My skin hurt, clothes would hurt on my skin. So after I paint, I don’t really care about that stuff. I can get up and not have to put on makeup. I’ve gained a lot more confidence, and I’m a lot more accepting of myself because I know there is so much more out there to focus on. People aren’t looking at me as hard as I’m looking at myself.

I think your paintings, especially the mixed media paintings, are challenging people to think about the misogyny that women experience every day. Why did you choose to use mixed media?

I work with recycled materials. I love picking a material and giving it a whole new meaning. I feel like I’ve always been collecting things and not wanting to throw them away. Instead, I put them into my work to give the pieces more depth and meaning. I feel successful when I can integrate these delicate and heavy materials together and give it balance and unity. I think it’s cool that people can walk up and touch it. When it’s hanging on a wall, you can look under and in between layers and see different patterns because I use fabrics and paper. It pops out at you.

It also allows for a more interactive experience. Do you do that with every painting?

It depends. Some people like the more simple pieces, but it’s really just personal preference with the model. If they want it to be more sculptural, or if they want it to look more delicate and minimal, I’ll do that. I enjoy doing the sculptural pieces. It’s really time-consuming because I’m using tweezers and tiny paint brushes. I don’t want to take away from the vulva, but when I’m looking at the photo reference, it’s not even that anymore. I’m turning it into a landscape. That’s how everyone should view their bodies—that they’re beautiful and powerful. I feel like this series gives power back to the female body. I hope people can view the female body differently and not attach those negative stigmas to it.

Lastly, has the political statement of your art grown stronger since Donald Trump was elected?

Definitely. Growing up Mormon, I was told that I can’t do things and that men have the ultimate authority. When I was little, the men and boys were able to go on camping trips, and the women and girls would just be sitting inside a room sewing. I thought it was so unfair. I’ve always been sensitive to when women’s rights are being attacked, and when I’m being attacked. I happened to do the series at the same time when Trump was being nominated, and I feel like art is political and women’s bodies have always been political and blamed for things. My intention in creating this series was a way to escape from this cult that’s telling women they have to be a certain way, or act a certain way, or feel a certain way. I feel like this is a resistance to that. We don’t have to look a certain way to have self-worth. We just need to respect each other.