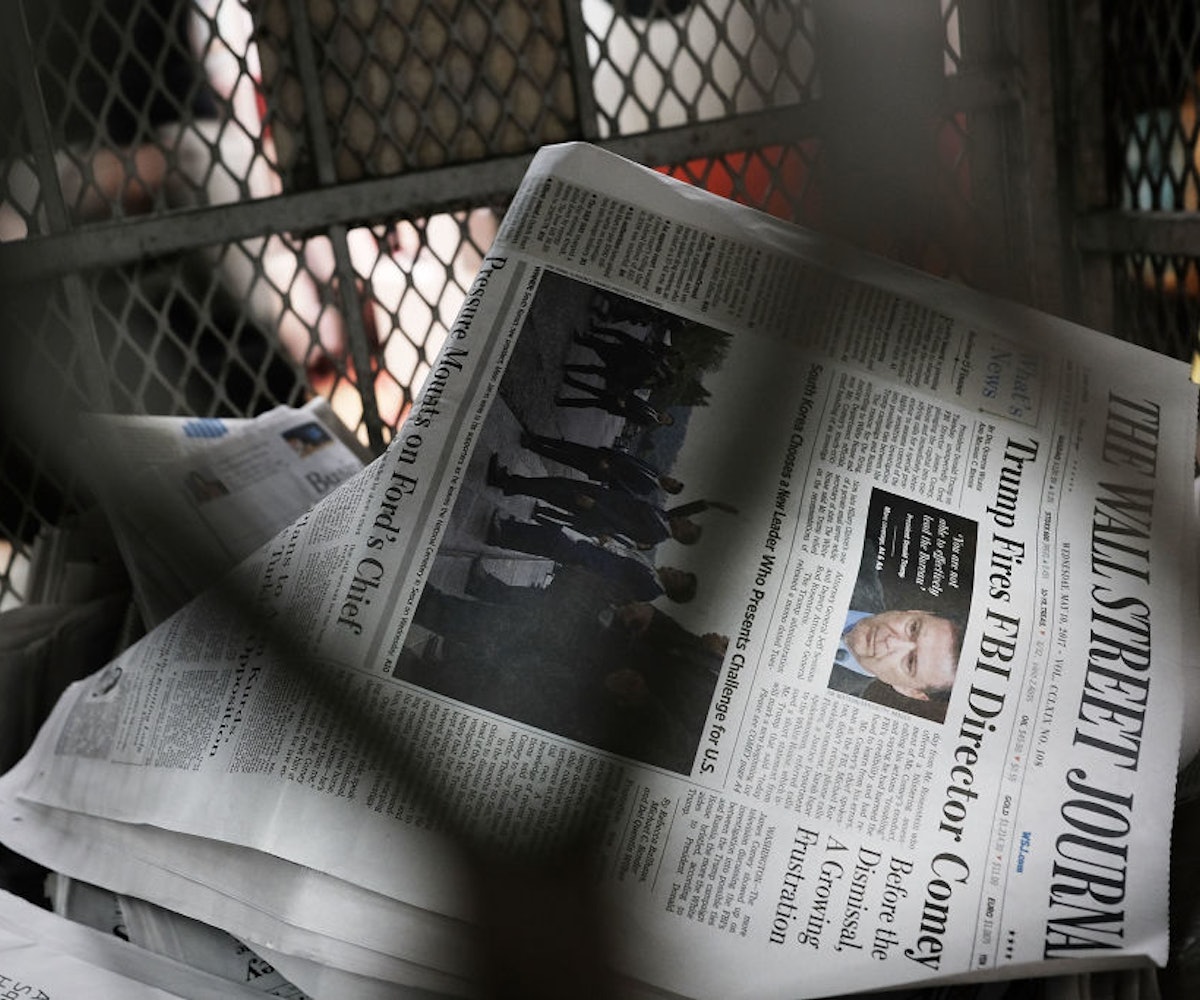 Perhaps you thought the biggest FBI-related news today would be that Trump has finally nominated a replacement for fired former head James Comey. Well, buckle up, because you're in for a bumpy ride.

That's because the biggest FBI-related news today is actually the release of Comey's official Statement for the Record, which came out in anticipation of Comey's testimony before the Senate Select Committee on Intelligence tomorrow. The testimony is fascinating in what it reveals, including the fact that the Intelligence Community was well aware in early January that there was allegedly "salacious" material (though its existence was still, according to Comey, "unverified"), which was potentially being used by Russia as part of their plans to interfere with the election. And I don't know about you, but when I read "salacious" material, I think "pee tape."

Apparently, Trump thought so, too. Comey reports that Trump, initially, at a private dinner between the two men, one which involved many awkward silences, "expressed his disgust for the allegations and strongly denied them." But when he asked Comey "to investigate the alleged incident to prove it didn’t happen," Comey told Trump to "give that careful thought because it might create a narrative that we were investigating him personally, which we weren’t, and because it was very difficult to prove a negative." Trump said he would think about it. But, I don't know, seems to me that maybe someone had second thoughts about Comey digging too deeply for that pee tape? Seems likely.

What else can we learn from this testimony? Oh, that Trump is a paranoid (well, is it paranoid if they're really after you? I guess not) megalomaniac, who, in the four short months during which he was president before firing Comey, had nine one-on-one conversations with the FBI director—four-and-a-half times more than Barack Obama did during his tenure. The meetings with Trump were clear indications of the former businessman's desire to get promises of loyalty from those around him; Trump went so far as to tell Comey, "I need loyalty, I expect loyalty," which is a direct and terrifying refutation of the necessary independence of the FBI from the goings-on at the White House. It makes sense then, that, after their first meeting, Comey realized it would be wise to make a point of recording everything Trump said in their meetings, something Comey never needed to do with Obama.

Also that Trump absolutely tried to strong arm Comey into dropping the investigation into Michael Flynn, a tactic which disgusted and dismayed Comey. Oh, and that Trump is obsessed with the "cloud" of Russia hanging over him, and can't work because of it. Plus, there's the fact that Trump told Comey that he was always very loyal to Comey because they'd had "that thing" together. And while Comey pretends to not know what "that thing" is, um, hello, it's the fact that Comey got rid of Hillary Clinton by releasing news about a potential investigation into her emails just days before the election! You know, that thing.

Anyway, then also there's the time that Comey "implored" Attorney General Jeff Sessions not to leave him and Trump alone in a room together; a request to which Sessions flat-out refused to reply to, because he's a weaselly little elf, I guess, but also because ghosting people, whether by not returning their calls or just, like, not answering their direct questions in person like you're a literal ghost, is something that people at this level of government just do? The practice comes up quite a bit in Comey's testimony, actually.

Well, anyway, I highly recommend you read the entire statement. It's one of the most fascinating things I've read all year and proves that Trump is the worst man ever. But, also that the people he surrounds himself with are not that great either! Nor even is Comey, come to think of it. Eh, at the very least, maybe this statement will be a good pick for the July NYLON Book Club. If our democracy hasn't collapsed by then, of course. Or even if it has. We'll need a distraction!