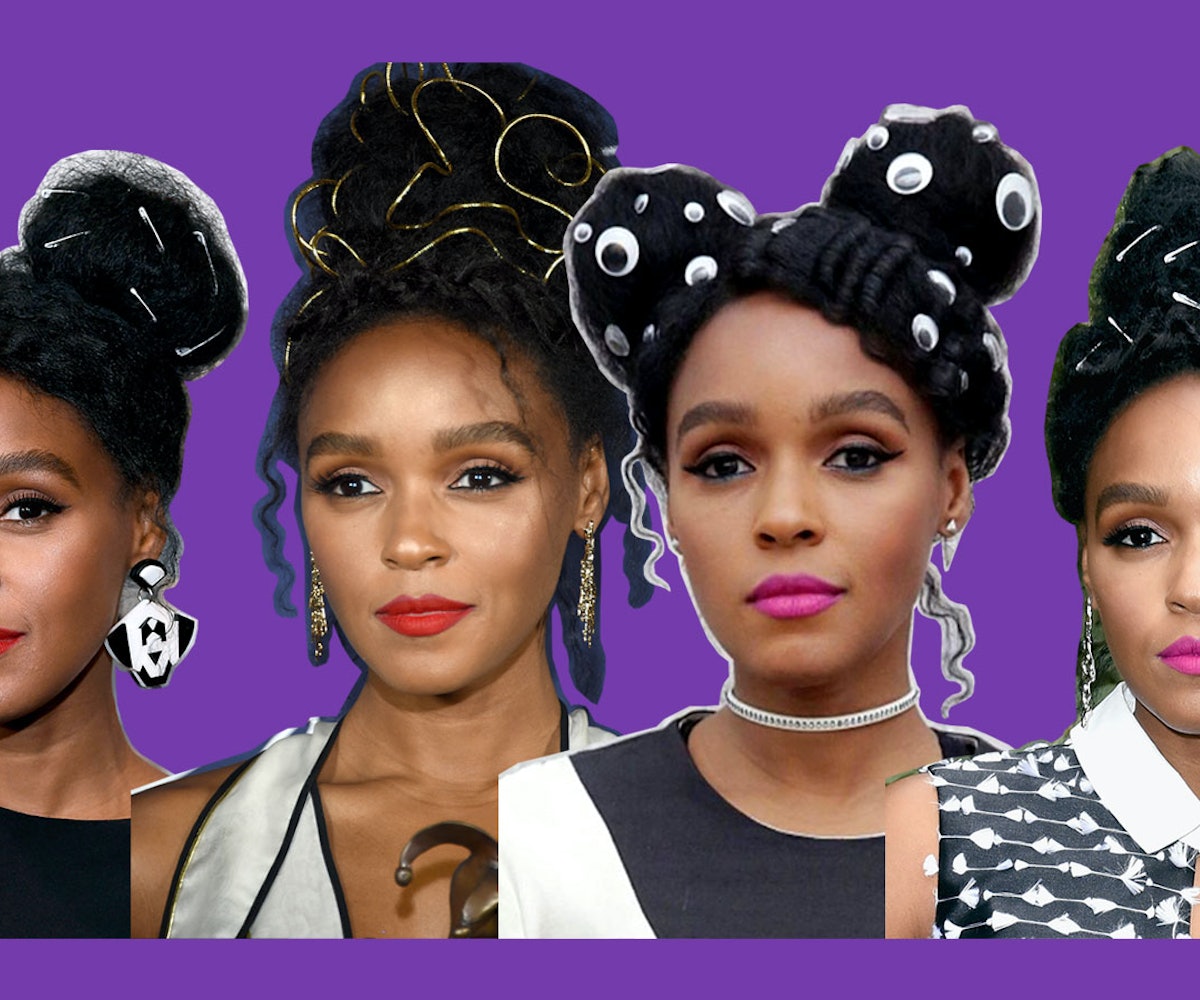 When Janelle Monáe steps in the building, all eyes are on her. Of course, they are; the outspoken singer-mogul-actress is a multihyphenate powerhouse, why wouldn’t everyone be looking? But also, it’s been impossible not to notice that Monáe has lately been rocking the coolest of coifs.

During December press rounds for her latest film, Hidden Figures (out in wide release today), Monáe rocked double buns adorned with googly eyes straight out of a Michael’s arts and crafts store—talk about statement hair! And the eye-catching trend is already spreading.

Credit for this look goes to celebrity hairstylist Nikki Nelms, who also famously created Solange’s beaded braids for her “Don’t Touch My Hair” music video. Nelms, a self-proclaimed hair Macgyver, is known for being able to pull together a stellar hair look with nothing but some shoestring and a safety pin.

And that’s exactly what the celebrity hairstylist did to prep Monáe’s hair for Variety's Creative Impact Awards and 10 Directors to Watch brunch recently. (Well, maybe it took a little more than that.) The starlet rocked her wavy tresses in an updo adorned with—wait for it—safety pins, for a fresh take on the traditional hairpin. This transformation of an everyday object into high art seamlessly merged kitschy and chic, making Monáe into a walking masterpiece.

Monáe’s internet-breaking hair was also present at the Palm Springs Film Festival, where she not only bestowed the award for breakthrough performance to costar Mahershala Ali for his role in Moonlight but also received her own award for Best Ensemble in Hidden Figures. For this event, Nelms refashioned Monáe’s natural hair into a classic pinup style with golden wire embellishments to create a crown fit for a queen.

We caught up with the hair magician herself to ask what inspired these amazing looks. Nelms tells us, “Janelle's eye-conic and gold wire moments were all about going with the flow. Sometimes I just get in that mood—all arts and crafty. Janelle is just one of those clients who is so creative that she welcomes new ideas. Every time a client makes me feel comfortable with trying things, the possibilities are endless.”

If you’re trying to achieve this look at home, look no further than your local crafts store. Nelms reveals, “I used really soft flexible pieces of metallic gold string that I picked up on one of my Michael's runs, that I strategically coiled and pinned.”

We asked Nelms what she’s got in the works for 2017 and what trends she hopes to see more of this year. The hairstylist had this to say:

Hopefully the next big trend in 2017 will be self-acceptance, and who's to say what amazing looks we would get out of all that freedom to just be! It's easy to be creative when you rid yourself of the fear that others won't accept your ideas. Nothing's ever cool until it becomes cool. So fuck it. Do whatever!

See more of Nelms and her work via her Instagram.

NEXT UP
Beauty
Harry Styles’ Beauty Brand Is Dropping Their First Makeup Collection This Week
Beauty
The Most Viral TikTok Beauty Products of 2022
Beauty
Tumblr’s Coquette Aesthetic Is Taking Over Beauty — How To Get The Look
Beauty
It’s Official, Y2K Beauty Trends Still Rule The Runway