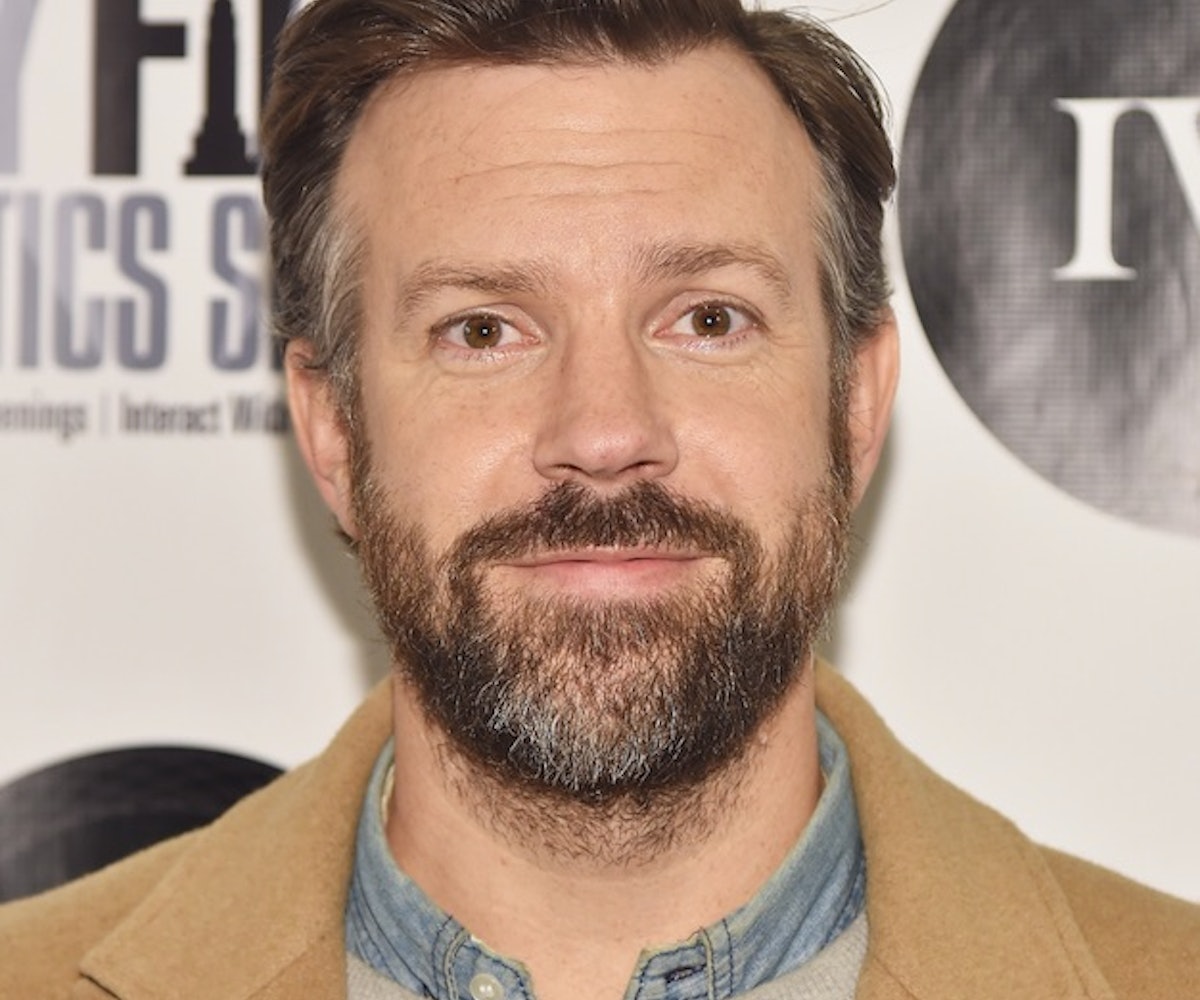 We’re used to seeing Jason Sudeikis entertain us as an inappropriate everyman in brazen comedies like Horrible Bosses and We’re The Millers, but for his latest role the former Saturday Night Live star is taking a more dramatic route. In Race, Sudeikis plays Larry Snyder, the real-life coach of legendary track-and-field star Jesse Owens (brought to vivid life by Canadian actor Stephan James), who in 1936 competed in the Berlin Summer Olympics and won a gold medal as Adolf Hitler watched in the stands. Sudeikis insists the role isn't a calculated move to prove his dramatic chops, but instead a case of the right script—and right character—finding him at the right time. And if his filmography is any indication, Sudeikis has been finding a lot of right scripts lately. According to his IMDb, Sudeikis has nearly 10 films in various forms of production, and that does not include his romantic dramedy Tumbledown, which hit theaters in limited release last weekend. We caught up with Sudeikis to discuss making the jump from comedy to drama, his hopes and fears for his son Otis, and why his most recent role is guaranteed to earn him the approval of his father.

We’re so used to seeing you as the funny guy. What was it like to make the jump into the dramatic world?

It didn’t feel like much of a leap at all. It just felt like it was a step forward in regards to the next job. I just really resonated with the story and the script. It didn’t even cross my mind that this was a more dramatic role. It did once it was done, but not during the process of it. Only in these past few weeks have I been like, “Oh God. People are going to see it. I hope they accept the premise.” Once the commercials start showing up on television, you’re kind of like, “Oh wow. That’s right.”

Was it strange to see yourself on screen portraying a role like this?

I’ve only watched the film once so it’s more like a video diary, and you’re sort of thinking about all of the things going on at that moment, or even the tinge of narcissism that occurs when you’re watching yourself and going, “Oh that’s what I look like when I’m seeing a Nazi for a first time.” So I’m really excited to share the experience of the film with an audience, and specifically my family and my father because I think he’s going to love this movie and specifically love Larry. I knew upon reading it that this is going to be my dad’s favorite thing that I’ve done, because it reminds me so much of characters that we loved growing up like Gene Hackman in Hoosiers or Kevin Costner in Bull Durham or The Untouchables.

You play a racing coach in this film. In real life, what is your stance on running?

I’ve never ran track. The six weeks a year that I decide I’m going to get in shape, I’ll spend some time on a treadmill. But I’ve never been one to put on running shoes and go run somewhere. I think if I was being chased, then I could be pretty quick.

So there are six weeks a year that you try and get in shape. Is this part of an ongoing new year’s resolution?

Yeah. Either all six weeks are at the beginning of the year or just throughout the year. And for like, three days, I’ll think, “I’m going to eat well.” It’s not a focus that I’ve had since I’ve stopped playing sports. So not much running in my life thus far.

You were a big basketball guy growing up. Were there sports that you tried that you weren’t very good at?

As a kid, you dabble in everything. I played soccer, I played football for a year in 8th grade. But basketball was the one that just sort of clicked, and it’s the one that I loved the most. It’s the one that made the most sense to me. And it was the one that you could practice by yourself. Looking back now, I spent a lot of time with myself practicing ball handling and shooting free throws. It was also the sport my father loved and continues to love. He played in high school and college for a year.

I’ve read that you don’t really consider yourself to be funny. Is this true?

It’s probably something I said in a certain context. It’s more so something that people put on you a little bit. Growing up, there was never a huge push to have the spotlight and try and make everybody laugh. I was always drawn to people who made me laugh and I always knew it was fun to make others laugh. It seemed like laughter allowed for things to be put at ease and also you’d get away with more. So it really lent itself towards that, but I was lucky to have a lot of funny family and funny friends. So maybe in relation to others, especially my generation of SNL. That’s enough to make you feel like you’re not that funny.

Now that you’re a father, do you look at your career as if you’re leaving this legacy of films behind for your son to watch?

It changes the way you view everything, regardless of the work you do, but the way you live your life, the self-flagellation that one might do when they do something wrong. You go, “Jason you idiot.” I’m less inclined to say that now because I don’t want him to say, “Otis you idiot!” It would break my heart to hear him talk to himself the way that I can sometimes hear the voices in my head talk to me. But yeah as far as the work goes, I’ve always tried to make my choices with a specific criteria and intentions, and to go about it that way. So that hasn’t changed. But I can see maybe down the line getting the opportunity to play something that I know he would love the same way I knew that my father would love Larry Snyder. I think the more words he learns, the more influential he’ll be in my life for sure.

Are you ever worried about him seeing any of your past films?

Not even Hall Pass?

I mean sure. That would be one! I would like to be there when he watches it, or him be old enough to understand what the heck is going on.

It’s quite possible that he’ll pick up some bad habits from a character like that.

Better my bad habits, which he already probably has a genetic jump on than maybe Ed Norton’s character from American History X, at least in the first act.

You have The Devil and the Deep Blue Sea coming up. What was it like working with Maisie Williams?

It was great. I have been really lucky in the sense that I keep getting paired up with these awesome people. From Rebecca Hall coming up in Tumbledown, to Alison Brie in Sleeping With Other People, and Stephan here. But Maisie is right there. That’s been around since 2009. Jessica Biel sent that to me and I was so flattered because it’s such an interesting script and complex story. And at that point, I hadn’t done anything. I was almost moved to tears when I read it that she saw this in me and that her and Bill Purple and Michelle Purple, the producers and director, thought of me for this part. And I was bummed when it almost went away a couple of times. But then Maisie came on, and there is such a great rapport between us. I think she’s an old soul. I look forward to seeing her again. Her and Stephan, I’m proud to say I worked with them when. It’s the same way I feel about being on the first season of 30 Rock. It’s like, I never would have gotten on there on later seasons. I got in when I could. It was very nice of Tina [Fey] to give me that opportunity to see that in me.

Is there more pressure playing somebody when you know that they were a real person.

Not in this instance. I’m sure Stephan feels it because that’s the true icon. That’s the name that you know.

So you pushed all the pressure onto him?

Yeah. I sent it all to him and said, “Deal with it buddy!” But the same pressure that came here was the same pressure I’ve felt in any other film I’ve done, to make the moment real and to make it feel real within me, and real to my scene partner or partners, and let the camera be the ultimate judge of if it was or not.

Going forward, are we going to be seeing a more serious Jason? Or will you still pursue comedic roles?

Well I think it’s a combo. I’m lucky to be asked to do these things. I consider myself very fortunate. I’m beholden to the imagination of directors and writers and casting directors, and if they see something in me that they feel works for a film and I believe that it’s something that I can help the film by portraying and playing, then I’m open to whatever it is. I don’t think of where it belongs on Netflix, if it’s comedy or drama. It’s just one thing at a time, and making the moment as genuine as my talent allows it to be.