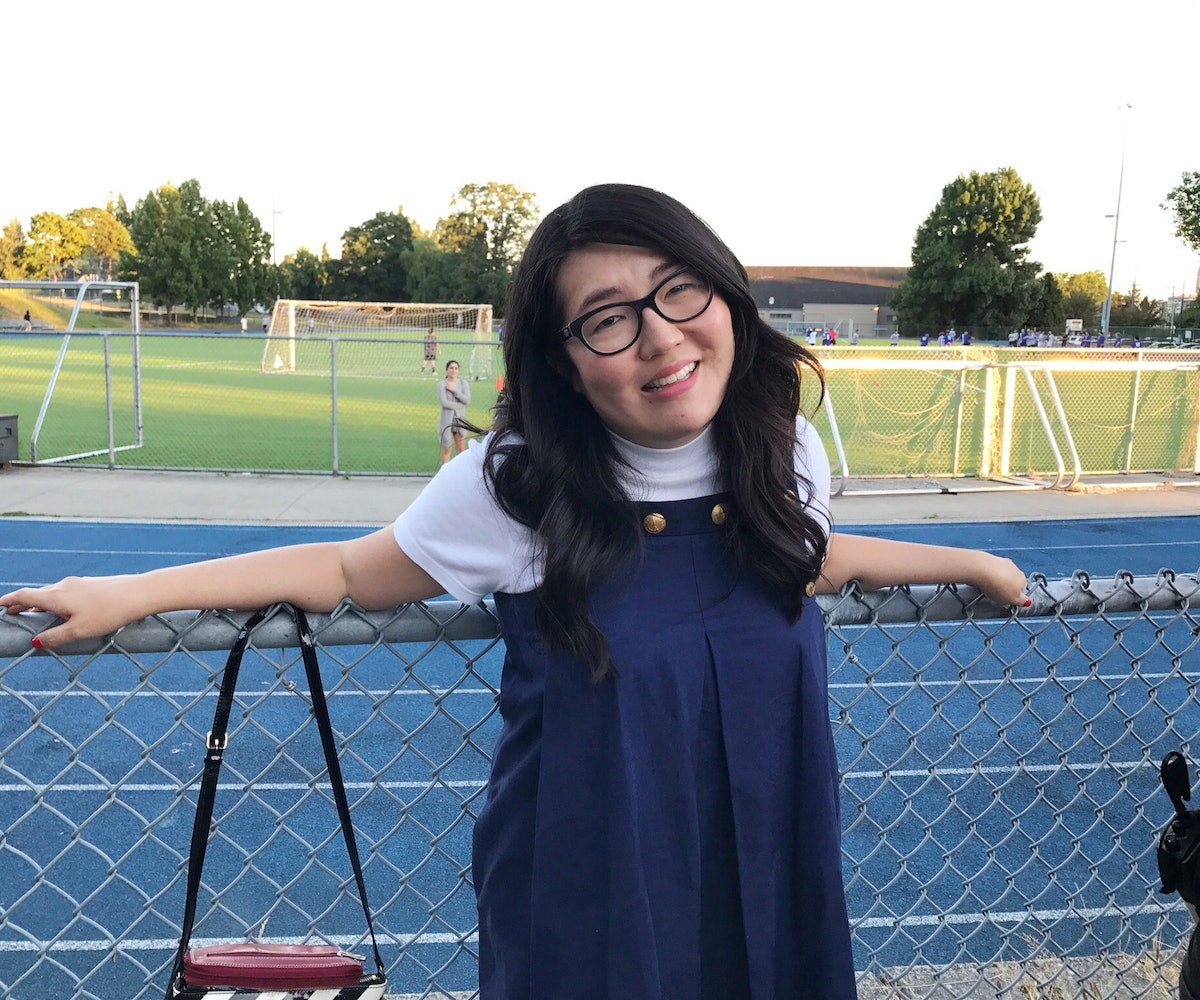 What distinguishes young adult fiction from, well, adult fiction? It's not the plot lines or narrative sophistication or even the age of the characters, but rather, according to acclaimed YA author Jenny Han, "It's the sense of hope."

And, indeed, a sense of hope is pervasive in Han's bestselling novel, To All the Boys I've Loved Before, which has been adapted into a Netflix film, premiering today. The story centers around Lara Jean Song, a 16-year-old whose life is turned upside-down when never-meant-to-be-delivered love letters she wrote to five different boys in her life are unexpectedly sent to them all. It's a story told with generosity and humor and a deep understanding of how complicated it can be to navigate your life before you even feel like you're really getting to live it. Han's deft touch with the nuances of being a teenage girl has been perfectly brought to the big screen; the sense of hope and a belief in things working out the way they're supposed to was well-translated, and will doubtlessly bring Lara Jean—and Han—countless new fans.

Below, Han and I talk about why YA is such a wonderful genre to work in, how some publishers wanted her to rethink making her main character Asian-American, and why being tender with each other is a gift we should all consider giving.

What about writing YA is so exciting to you still as an author?

For me, narratively, that time in your life is the most compelling because it's a time of a lot of firsts. And when you experience something for the first time, it's something you don't ever forget; whether it's the first time you fall in love, or have a really big disappointment. I also just really like teens. And so I find it to be the ultimate privilege when someone says your book is what made me fall in love with reading. Because I think when you ask people what the most important book to them, it's usually a book they read when they were young. That's an enormous honor to think someone would carry that through with them for the rest of their lives.

I think teens respond to your work because you capture those firsts and that age so well, its amorphous quality of discovery and exploration when nothing is really solidified yet.

When you're young, you don't have a lot of control over even basic things in your life—where you live, what you eat, where you go during the day, how you get there. You don't have a lot of control, and that can feel sort of unstable in its own way because you don't get a say in those basic things. And that's why I like writing about that time, because things aren't solid or fixed, and they're still being figured out.

Right, it offers the ability to show teens that, even if things don't get better, they get different. It gives them a glimpse of the other side, in a way.

I think that's what distinguishes YA from adult fiction—it's not just the age of the characters, but it's the sense of hope. Because I don't think I've ever read a YA book that feels completely hopeless at the end. There are sad endings, but there's always some small piece of hope in there, and with adult novels, there's not that same kind of an obligation to that.

I think that's why so many adults I know are so into YA right now, because of that generosity to the characters. It's a type of grace we don't get as much of in real life. There's a generosity of spirit that can be refreshing.

I think there's a tenderness that we have toward the story, but also toward our readers. And I think that's what sets YA apart, is that people who write for young people care about young people. I certainly feel like I think a lot about wanting their happiness, and only wanting to be a positive force in their lives.

That's a really beautiful thing, the conscious decision to make other people happy. Also, I feel like I just read somewhere that the word "tender" is, like, the word of the year.

[Laughs] Yeah, well, I don't think it's an official word of the year, it's more like a random tweet that I saw about how it's a big word right now.

It's interesting because "tender" means more than one thing. Like, "I'm feeling really tender right now" means I'm feeling really open and raw and vulnerable. And then you think about being tender with somebody, and that means just being gentle with them.

Right, like we're all just open wounds sticking to each other.

Yeah... it's kind of gross, but also intimate. Anyway, I also think one way that YA authors are taking care of their audiences is by showing a much larger representation of experiences than what used to be depicted.

I think the reason why you see a lot of that stuff happening in YA is because people are thinking of how to do what's best for kids. It's like when you go on a school visit and you see the makeup of the room, you think, Geez, these kids deserve to see themselves in books, too. It shouldn't just be one kind of kid. And so when you travel around and meet kids and hear their concerns, you start to think about what they need.

Did you anticipate To All the Boys I've Loved would connect so strongly with so many people? What made you want to tell this story?

I wanted to write a story that felt very classic in the sense of books like Little Women and Anne of Green Gables, and I think what makes books like that feel really classic is that sense of warmth and good-heartedness and family and being around the hearth, and that was what I was hoping to write. I wanted a girl who's a bit old-fashioned and kind of a throwback and romantic. I hoped that that kind of character would resonate. I also wanted to write a character who was a bit of a late bloomer; she isn't necessarily ready for the stuff other kids her age are ready for. And she's okay with that. She's quite content with the way she is. And, to me, that character is interesting and that story is interesting.

It was clearly interesting to a ton of people. It got such an amazing response. How did that feel?

It felt really great because I had been told by people I had met in publishing that maybe I shouldn't be doing a book about an Asian-American family because they didn't think people would want to read about that. But I felt like as long as the book got to the people who wanted it, then I didn't really care if it didn't end up doing well. I also said to my publisher that I really wanted the cover to have a photographic image of Lara Jean, so people could walk into a bookstore and see a book with an Asian girl on the cover. And it turned out to be the first book to reach the New York Times bestseller list with an Asian girl on the cover. And to me, that was really affirming because people connected with her and people—all different kinds of people—saw themselves in her.

How was the experience of seeing it turned into a movie?

As an author, it's a surreal experience. Because it's your story that you thought up and you give it to somebody else and it ends up being such a big production with so many other people involved in its fruition. That can be overwhelming, but also amazing, but also scary at the same time, because you're having to trust a lot of other people with something. And I think there's a misconception that authors have a great deal of control over the movie, but the truth is we don't, because once we sell it, we just have to trust that the people we're working with are okay. I was lucky that the producers were open to hearing my feedback, not necessarily on everything but on a lot of things, they were willing to do that. Because they understood that what I was protecting wasn't even my story, but was really my readers. I knew how much the story means to them and I kept saying, "I want them to see the story that they've been waiting for."

To All the Boys I've Loved Before is streaming on Netflix now.