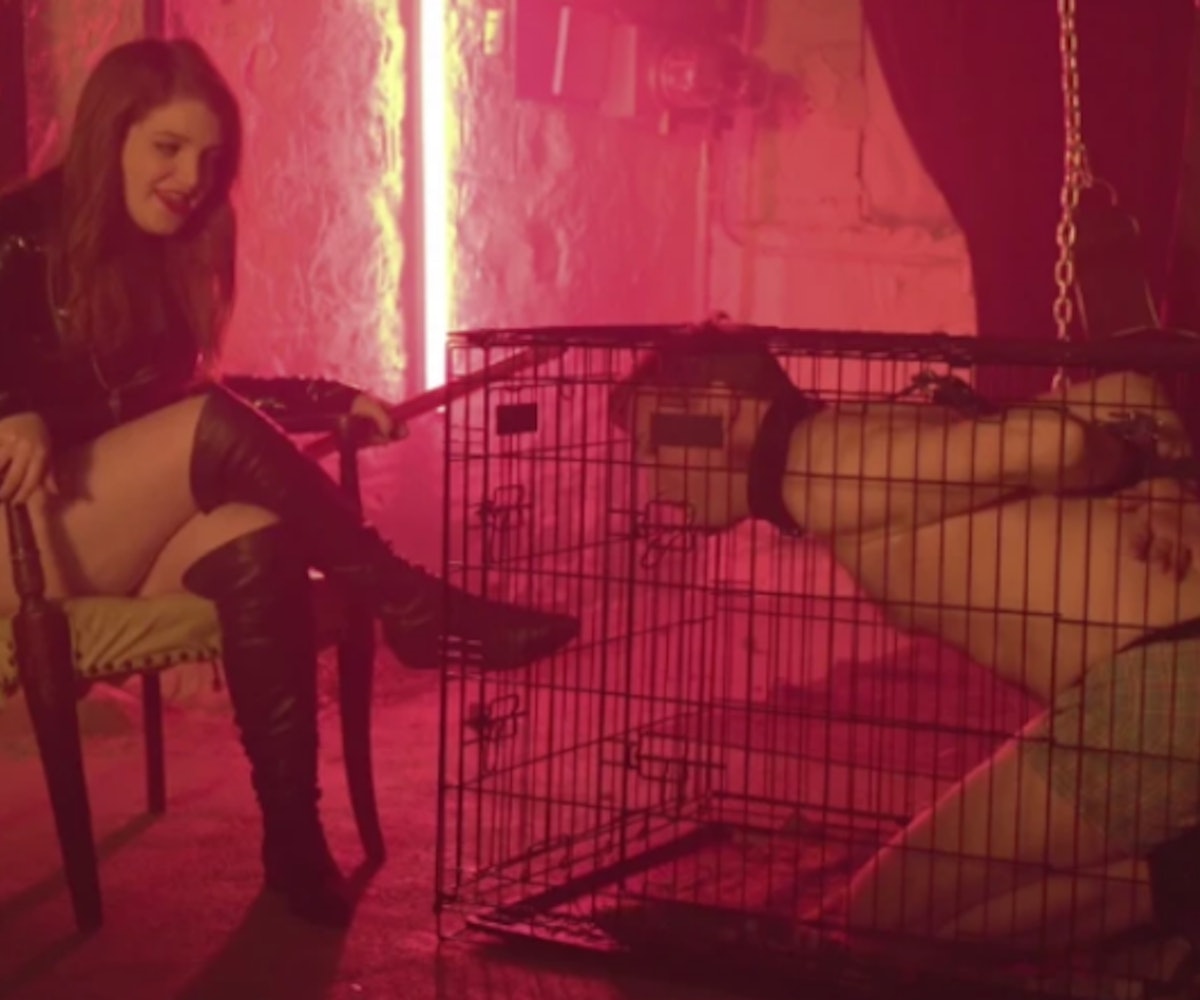 The main character in comedian-writer Jenny Jaffe’s sensational web series, Neurotica, Ivy (played by Jaffe), is pretty much your run-of-the-mill friendly neighborhood dominatrix: floggings, verbal abuse, role-play fantasies—you get the picture. Just don’t ask her to spit in your mouth. She has some hard boundary lines where her obsessive-compulsive disorder is concerned. This poses some uncomfortable challenges to the good-natured mistress of pain, who must reconcile her desire to please all her clients with essential instincts of self-preservation. Jaffe drew on her own experiences with mental illness while conceiving the character and her cheery little world, relying on the same go-getter attitude that’s made her an asset to the writing staff of Disney’s Big Hero Six cartoon series. The two projects appear diametrically opposed, but they fit together snugly under Jaffe’s sunshiny weltanschauung.

The entertainment multihyphenate, CollegeHumor alumna, frequent TV critic for Vulture, and founder of nonprofit Project UROK (a foundation dedicated to combatting stigmatization of mental illness) took a moment to Skype with us from her home in Los Angeles. With her pet pooch, Spoof, happily wigging out in the background, Jaffe chatted about working with an invisible illness, the “sadcoms” she loves so dearly, and the anti-meritocracy of mMusic.ly.

To what extent did you draw from your life for the main character of Ivy? Her OCD feels very lived-in.

Her OCD makes it difficult to get some aspects of her job done. Are we to understand that the same goes for comedy?

There are just aspects of being a professional in any line that are made more difficult by any invisible illness. It’s something that you have to deal with, and then it can be worsened by any number of external stresses. To me, the interesting thing about Neurotica is that it’s about someone who knows what their issues are and is learning to cope with them, but they’re exacerbated by stressors in her environment. When you have any mental illness, you’re still a person in the world striving to accomplish personal goals. This is something I’ve come across in writing, especially because I think comedy and writing, as professions, have a lot of start-and-stop. Inconsistency, for someone with OCD, is really tough to accept. Those long silences are times where you can only listen to your own self-doubt, and it’s amplified by that space.

You’ve been working on Disney’s Big Hero Six cartoon while you’ve been at work making Neurotica, which has a bouncy attitude similar to a kids show. Has passing between the two projects been fluid that way?

It’s more about my sensibility, which came up with one and fit the other well. I approach things, even difficult things, with a light touch. That’s how I view the world. I’ve been through some rough stuff, and the tack I’ve taken is to figure out how to enjoy any given thing as much as humanly possible. That’s what’s coming across in these two projects. Kids’ shows have an optimism because that’s what we want for our kids, and a lot of the things I write share that optimism. When I was telling people about the premise of Neurotica before it came out, they were surprised I was doing it in tandem with the Disney work. And when it came out, they saw that it all fits in the bigger picture of my writing. There’s a can-do attitude in kids’ shows I really appreciate.

You’ve Got Mail seems to be the schematic for the back half of the episodes. Is Nora Ephron particularly close to your heart?

Oh yeah, big ol’ rom-com fan. I’ve probably seen that movie a million times. I always really liked old-fashioned sitcoms and TV comedies from the ‘90s. I don’t think they’re quite in vogue at the moment, but I love the escapist comfort in that entertainment. It was fun to pull off an homage to that, and it helped me by giving me a framework to write within. There’s enough that’s weird about the world of Neurotica that we could play all that with a light touch and enjoy a familiarity around it.

There are so many fantastic shows on right now about the way real relationships function—Master of None, Insecure, Love, Bojack Horseman, You’re the Worst. There’s a lot of great realism at this moment, people making great observations and assuming points of view we haven’t seen on TV before. For my sensibility, though, what makes the most sense is to show a “TV version” of life. I like jokes! I like writing real jokes into a TV show. There are lots of shows that don’t trade in jokes and are still totally amazing. But that’s not what I do.

Speaking of Bojack and You’re the Worst,  I see Neurotica as part of a larger wave of TV comedies that have spoken to issues of mental health more directly than we’ve experienced in the past.

I wrote a piece for Vulture a year-and-change ago, called “The Rise of the Sadcom,” that was talking about the same thing, though it was mostly about Rick and Morty. There’s a tide turning toward more complex characters and allowing characters to be multifaceted. There have been positive developments in terms of what kind of characters we allow to be complicated. I like that there are female characters on TV who are difficult to like. The line between comedy and drama has been blurred a lot. Calling something on TV like Transparent a comedy doesn’t quite cover it. I was thinking about this while watching the Emmys the other night. Soon, they’re going to have to make a third category, because the total overflow of stuff has created a wider variety of tone and genres.

But as for mental health—a year ago, I was running Project UR OK, so I spent a lot of time in the mental health nonprofit world. I’m proud that that’s continuing now, and I think that’s part of the larger wave of awareness you mentioned. One of the things about the internet is that people realized how easy it is to make it seem like their lives and emotions are things they aren’t. Then the curve swung back and people realized, “Oh, it’s more interesting to be a full version of myself and to be honest about my flaws.” I have this, too—like, I’m jealous of the life I have on Instagram. Obviously, I’m not posting pictures of myself crying in the car because I’m pretty sure I made a mistake.

You’re part of the first generation of comedians to have cut their teeth through the internet. What’re the pluses and minuses of this new frontier?

It’s a challenge. It’s great, everybody having a platform, but it’s also tough because everybody has a platform. The best part is the democratization of content—that you’re getting people who wouldn’t get the chance to do a TV show at first still making stuff like Misadventures of Awkward Black Girl or Broad City. That gets them seen and picked up by larger platforms. But there are probably a million amazing web series no one will ever see because there’s such a huge glut of content. In a lot of ways, it’s an embarrassment of riches, but unfortunately, it’s about loudness and clout. There are people who won’t make things with you unless you’ve got a big social media presence. It’s good, and it’s bad, so I just feel lucky I’ve been able to cut through the noise.

I think the internet is still in flux, like, these business models haven’t settled into the shape they’re going to take.

We’re still in the early days of the internet, and it’s easy to forget that. But our generation has seen so much change so rapidly. We’ll see in 10 years if content looks like TV. The ideal version of the internet is like the ideal version of capitalism, or democracy—hopefully, the best thing would prevail on merit. But, of course, that’s not exactly what it is. And not to sound old, but now you can lip-synch on fucking Music.ly and get 30 million followers, and they’ll fucking greenlight a TV series for you!