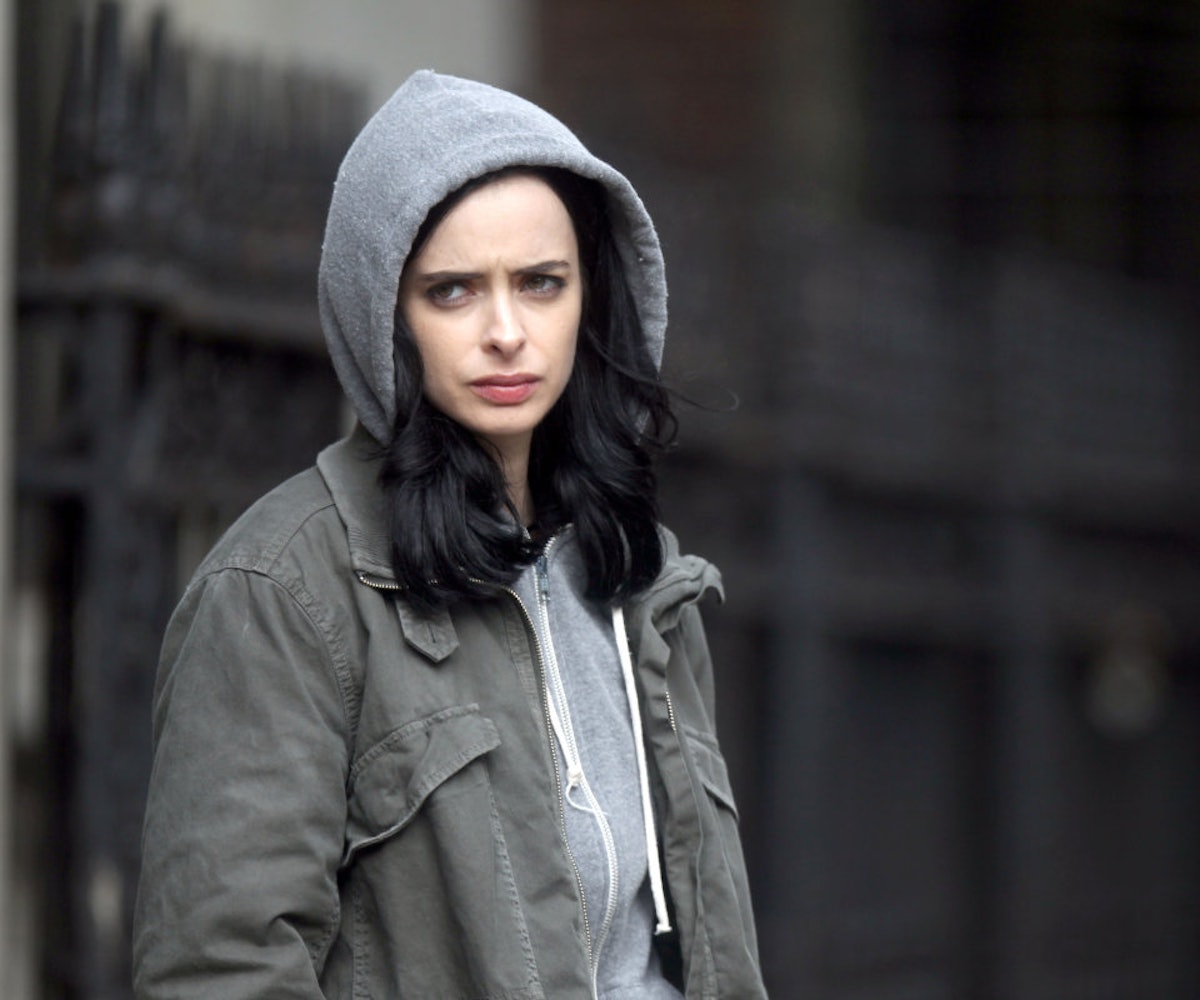 Jessica Jones is a seriously enjoyable and smart addition to the seemingly endless Marvel media takeover. You don't have to be a diehard comic-book fan to dig into this neo-noir Netflix series, which stars Krysten Ritter as a hard-drinking private dick with a secret superhero past, although it probably helps. Still, the show stands on its own two feet, and on the very capable (and strong) shoulders of Ritter. She's joined by Rachael Taylor as Jessica's best friend Trish Walker, Carrie-Anne Moss as the ruthless attorney Jeryn Hogarth, Mike Colter as the sexy and mysterious Luke Cage, and David Tennant as Kilgrave, the nexus of Jones' problems and, as it turns out, her most recent case.

When Jessica isn't solving seemingly impossible cases, she's getting blackout drunk in an effort to quell her PTSD. The cause of her trauma isn't made explicit at first—we get glimpses from flashbacks and nightmares—but her latest case makes it impossible for her to avoid any longer. Hope (Erin Moriarty) is a fresh-faced athlete from the Midwest whose parents hire Jessica to find their daughter after she goes missing, and the deeper Jessica gets into the case, the harder it is for her to squash down the events of the past and the horrible events that brought her to where she is now.

I jumped into Jessica Jones with almost no information beyond the marketing that's been all over the Web. I was curious to see if the show could stand on its own, if it made any sense, or offered any pleasure to a person who wasn't busy filling in the blanks of the characters' backstories or seeking out the connective tissue between the various properties. It's easy to pander or to let viewers do the extra footwork—and to be sure, it can be really fun to put the puzzle pieces together if you're a fan—but it takes creativity and smarts to create a narrative that can be enjoyed on its own merits. The cool thing is that it is possible to 100 percent enjoy Jones as a newbie to the Marvel world, and I would imagine that Marvel fans will find it even more delightful.

Like Matt Murdock in Daredevil, the first Netflix Marvel series, Jessica Jones lives in Hell's Kitchen, in a New York City that was devastated by the fight between the Avengers and Loki, as seen in The Avengers. There are some allusions to this event, but it's not as central to the plot as in Daredevil. And if you've read anything about the Marvel/Netflix deal, you know something's up with Luke, the hot bar owner that Jessica spends her free time spying on, because he's got his own spin-off coming, as well.

Digging deeper into its Marvel roots reveals something especially interesting, which is that showrunner and executive producer Melissa Rosenberg flipped the gender of Jeryn Hogarth. There's no fuss about the fact that Hogarth is a lesbian either, other than the fact that her affair with her secretary Pam (Susie Abromeit) is contributing to a messy breakup with her wife. There are other changes as well, but that's the most obvious and the one least likely to give away any pertinent details about the story.

Rosenberg is probably best known for her Twilight scripts than anything else until now. Rosenberg's scripts improved upon the books quite a bit, but there's only so much you can do with source material that has a legit love triangle between a sparkly vampire, a simpering teen, and a werewolf who eventually falls in love with her former crush's vampire baby. What's particularly delicious about Jessica Jones—aside from all the big-screen-worthy action scenes—is that it can be read as an indictment of Twilight's idea of love and romance. While it's all well and good to separate fantasy from reality, people who engage in Edward's behavior in real life are stalkers, or worse.

In Jessica Jones, the person who acts most like Edward is the show's villain, and our heroine is doing everything within her power to break his hold on her and everyone else he comes across. She is the definition of an unlikeable protagonist; she's spiky and self-destructive, and she has done (and will probably do even more) unforgivable things. I can't wait to find out just what they will be.