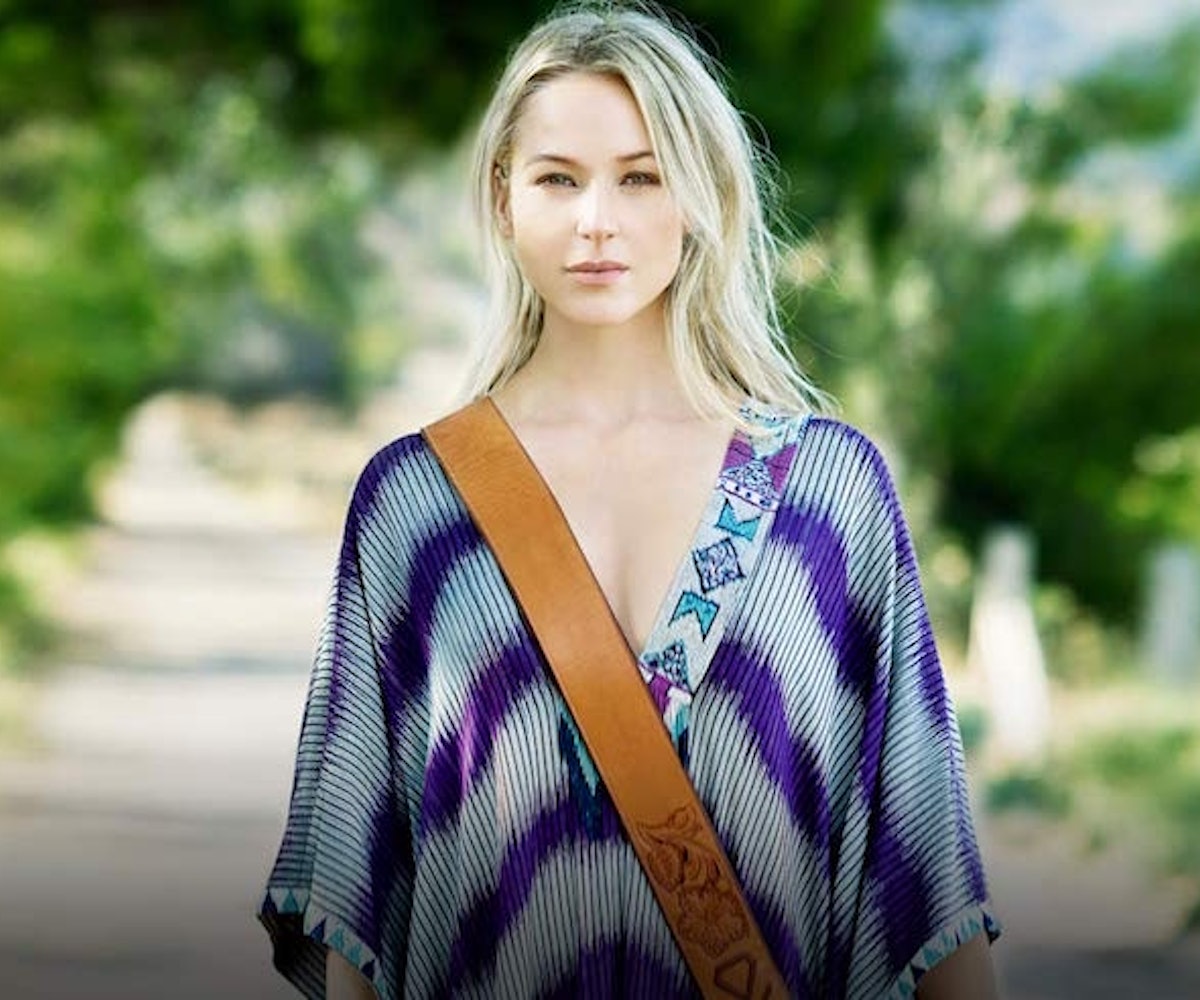 Chances are that at some point in your life when things felt messy, or you were suffering from a broken heart, you popped on Jewel’s Pieces of You album and began singing at the top of your lungs (while probably sobbing uncontrollably at the same time). Even if the world didn’t understand you, there was always the feeling “at least Jewel does.” Her relatable, almost journal-like lyrics translated into an honesty that made songs like  “Foolish Games” and “Who Will Save Your Soul” canonical for many, transcending the genre of folk music and entering into our pop vernacular.

That resonating honesty came with a price tag. As Jewel tells it—both in the newly released memoir Never Broken — Songs Are Only Half the Story and her 12th studio album Picking Up the Pieces—her early life was frighteningly chaotic. Dealing with abuse, trauma, financial disaster, homelessness, agoraphobia, and more is, by anyone’s checklist, the perfect way to turn someone into a statistic, which makes Jewel’s determination, success, and sense of self even more admirable.

Now embarking on a tour in support of both the memoir and album, Jewel is ready to bare all, and spoke with us about nurturing oneself, staying true to your wildness, and yes, who saved her soul.

Your first album was called Pieces of You and this newest is called Picking Up the Pieces. Was there intent to come full circle?

Yes, it was meant as a bookend. I wanted to have no rules, and show a very unadulterated record with no pretense, no artifice. I wanted people to have a very visceral reaction to the record where it felt like there was a line going from my vein to your vein, so you could feel things as intensely as I did. Having no rules was big—there was no thinking about genre, no thinking about radio, no thinking about tempo.

You mentioned not worrying about radio play, but I don’t think that’s ever been a concern for you.

You know, I was mentored by Bob Dylan and Neil Young…my goal as an artist was never to be popular, it’s hopefully been to be great and be honest, to not use art as propaganda, to not make myself seem like something I wasn’t.

But I feel like propaganda is something you’ve touched on.

is all about sex and commercialization. That song says, “Sell your sin. Just cash in.”

Yeah, that wasn’t one of my favorite records (laughs). I’ve seen a lot of messages on how you’re not allowed to be sexy and be smart, or you can’t be popular and be talented. I was at an extremely stressful period in my life, and I grew up listening to Cole Porter—these dance hall songs about letting loose and letting go and cleverly putting in social commentary. I think Cole Porter was so good at that. So that was my goal with

, to make a modern dance hall record, and to make one that had social commentary that hopefully was still very smart and lyrically driven. It was fun, I really enjoyed it, but a lot of people didn’t really get it.

Why do you feel like now is the right time for this book?

Two reasons. One, it was the right time in my life. I was going through a divorce—most people get drunk and have casual sex, and apparently I like to sit down and pick every emotional scab off and examine it. It was good for me as a person. The other reason I’ve been meaning to write this book for a while is that I get asked quite often about my background, how at 15 I became homeless, shoplifted, had agoraphobia, and still learned how to overcome that. I knew statistically chicks like me don’t end up doing well and I didn’t want to be a statistic. I wanted to look at nature versus nurture and if I didn’t have good nurture could I ever know my actual nature, or could I re-nurture myself. Writing is an extension of me trying to answer those questions, and that’s really what the book’s about. The forward talks about how there’s no excuse to not find happiness, and if you’re blaming family, or you don’t have the right house, you’re always going to be unhappy. If you want to take your life in your hands and you want to be accountable for your own happiness, then it’s a book that might help you.

What was it like to write the book and album now that your son Kase is old enough to be a tiny, autonomous human?

He came to the studio. He doesn’t like my singing, which is really funny. He’s like, “Mom, it just makes me sad.” We write songs every night though, we improvise. He picks a topic and I’ll set up a rhyme and leave the end blank and he fills it in.

You haven’t talked to your mom for several years at this point. Were you hesitant about sharing things in the book about your relationship with her?

Yeah, I was a little nervous about it. It’s something I’ve never spoken about publicly—it was a pretty tender wound, for sure. But my goal wasn’t to hang my mom out to dry, my goal was to talk about me and the choices I’ve made. I think it’s the job of the child to examine the good and the bad of our parents and hopefully, do better than they did. There’s a song on the record called

that really talks about that. You have to examine where you came from and choose what seeds you want to keep and re-sow and which you don’t want to perpetuate.

Picking Up the Pieces tour

I’ve always kind of done that, but it will definitely be more elaborate now because of the book. I don’t do a set list; I do a different show every night. I walk out on stage and feel the audience out. Sometimes I talk more than other nights, it just depends on what I get from the audience and the mood I’m in. Some nights I take requests and do a bunch of obscure songs and other nights, people ask me questions. It’s varied.

Do you still connect with the 21-year-old version of you that sang Pieces of You or do the songs feel different now?

Yeah I still connect with them. It’s interesting to see what songs I can sing year after year and not get completely bored of. There are songs on this new record that pre-date a lot of the songs on

, like “Carnivore” or “His Pleasure Is My Pain,” those I’ve been trying to get on a record for literally 20 years so I’m happy I finally got around to it.

The book is called Never Broken, but your new album is called Picking Up the Pieces. How do the two relate to each other?

For me the book was more—it’s a funny word to use because I don’t mean marriage—but it’s about a domestication of myself. All of us in whatever job we choose start out lawless, to some degree. It really makes you dynamic. Then you learn structure, you learn the rules to the game, and at some point you sacrifice pieces of you that are very vital and very wild. It really happened to me in my life. For me,

Picking Up the Pieces

was really about going back and examining which parts of myself had gotten dulled, what parts had been compromised to make other people happy in my life, and letting go of those things and picking up the pieces that were most essential to me. My wildness, if you will. It was also about picking up where I left off with

What’s your advice for others when things go south and they have to pick up the pieces?

It’s possible. It takes focus and work; it’s like an archeological dig back to you. I talk in the book about the extreme traumas I’ve experienced and how I recovered from them and a lot of it was this dig, where you get rid of what isn’t you, in order to get to what is essentially you. And that’s very possible.

You say that some of the darkest times in your life were when you were seeking love from others and it wasn’t there. Was finding self-love difficult for you?

Yeah, there were times in my life where I was willing to forego the truth in exchange for a love I hoped I would get. That definitely is a job only you can do for yourself. Our parents should love us unconditionally, but not every parent does, and that was a hard lesson to learn. Really learning to love yourself when neither parent thinks you are worthy of it is a difficult task, and it took a lot of years for me.

Was there ever someone else in your life that saved your soul?

For me, the book is about taking accountability for you, at all times. I think it’s up to us. We have to look in the mirror and say, “I’m responsible for my own happiness.”