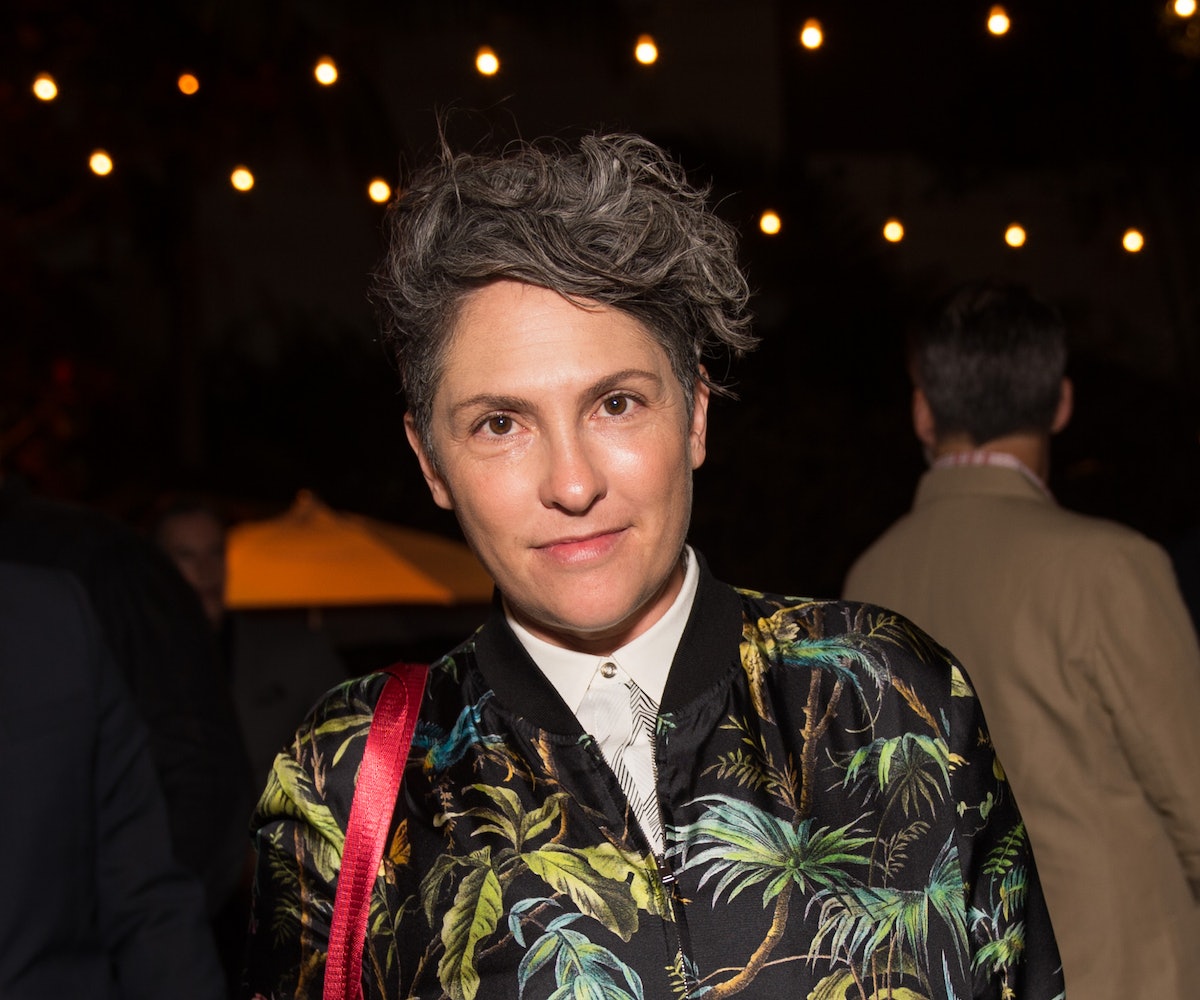 It’s FYC (For Your Consideration) campaign season. Meaning, it's the time of year when television studios heavily promote their shows in hopes of an Emmy nomination and, ultimately, award.

These promotions take all sorts of forms, some wilder than others: Last year, a carnival was held courtesy of Fox to push Grease: Live. Hulu's The Mindy Project set up a fashion show at L.A.’s The Grove, and the streaming network also hosted a screening for its show The Path in a cemetery. What used to be a couple of billboards here and there turned into spectacle-driven events and many agree, it’s all gotten to be a bit… much. But with the sheer volume of shows out right now vying to be seen, it’s only bound to get louder. Jill Soloway of Transparent and I Love Dick is trying to avoid all of the noise, though, with a different strategy.

With the guidance of producer Cortney Wilson, the Topple team has created 30-second clips promoting each of the show’s creatives. From editors to actors and production designers, each individual team member has their own unique short highlighting their work. The videos are brief, but they’re also personal, intimate and help give visibility to many behind-the-scenes workers.

We had a chance to speak with Soloway about the decision to make an impact with a campaign that's more grassroots rather than in-your-face. See what Soloway had to say, ahead.

This year has been touted as the biggest FYC campaign season yet. Why did you choose this particular promotional route for your campaign?

Amazon is doing a fantastic FYC campaign. It's really great. But it's sort of like, if you live in L.A., there's no amount of FYC campaigning that is enough. If you are driving down Sunset Boulevard and you are working on a TV show, you will get triggered as you start to see the billboards for all the shows that are not yours, and you'll just be like, "Why does Billy Eichner have a building-sized billboard and we don't?" All you can really do is avoid Sunset altogether.

In previous years, I think I was just content to kind of cross my fingers and hope for the best. I think I was also informed a little bit by a view of awards as, Oh, it's not cool to care, you're not supposed to care. There was also this idea that awards involve the industry patting itself on the back. Transparent has been able to get so much attention from getting awards, and for me to look at what's happened in my career after getting the awards, it's hard not to get really excited about the possibility of awards, especially for some of the trans and gender non-conforming people, for the women and people who work on both Dick and Transparent who are new to the industry. I just feel like I don't want to be ashamed to openly dream of things like an Emmy nomination for somebody like Trace Lysette, who plays Shea, or an Emmy nomination for Our Lady J for her writing. It just kind of allows me to go, "You know what? I'm willing to feel competitive." I'm willing to go toward what I want in the name of trying to create a little bit more parity for the women and gender non-conforming and trans and queer and people of color who are within our ranks and willing to push a little bit and see if I can add on to what Amazon's doing to make these nominations happen.

Did you have a part at all in making the videos?

Everybody was involved. Jim Frohna, the cinematographer, wanted to talk about which of his shots were going to be in his video. People wanted to contribute, which I think is also nice. Inspiring everybody to take matters into their own hands felt active and exciting. Cortney invited people to not only name their favorite parts of their performance or name their favorite parts of their craft and then help the video get made, but she then gave people these assets, so they can just be tweeting the heck out of them and Facebooking and Instagramming. It's sort of like bringing in some grassroots technology that we all have from our queer world and our indie film world and trying to hand them to some of the people involved in Dick and Transparent, so they can feel more of a sense of control about this moment in the year when everyone feels so anxious.

So how do you hope these videos stand out from other campaigns out there?

I guess one of the things is we think that, by making a video for everybody, it's more egalitarian. You can never really figure out who's going to get a nomination, but there is a feeling sometimes when you're working on a TV show that this is the actor the TV show believes has a shot, so this is the actor they're going to promote. I think that's the biggest difference. When you see the videos and see that we're attempting to create an egalitarian system, where we're sort of equalizing everybody involved—everybody has their video, everybody has their little promo from both shows—that's one of the bigger differences.

I think we are trying to include everybody as much as possible. It's a lot of work to create a great little promo for each actor and for each department head, so, I think, that's probably why more established shows don't do that. They're not looking to reinvent the wheel, especially if it means more work.

We'll know in July if it actually did anything, but the feeling that we have some control over it is, to me, an anxiety-reducer. To be able to say when July comes around, "I think I did everything. I tried everything. I tried as many different ways as I could. I didn't leave any stone unturned." I think that's better than the feeling of, "What if?"

I read that the average cost of an FYC campaign can come in at $50,000 a pop, which seems a bit excessive.

Oh yeah, it's crazy. Now that there's like 500 shows or something, I think it's becoming even more so.

Considering The Handmaid's Tale has had women walking around L.A. dressed in the distinctive wardrobe of its characters, do you worry at all that yours isn’t as colorful as the others?

What should I do? Should I have the Dick cast walk around with dicks behind the Handmaid's Tale lady? That could work, right? Figure out where the handmaids are going to be, go right behind them. I don’t know. I mean, for Transparent, we've been doing really cool stuff, like my sister and I submitted an episode we wrote together, and we submitted a song that we wrote when we were little kids, and my sister [Faith] also just put on a musical in New York called, "Should Transparent Become a Musical?" So we're sort of using the fake musical, which was a joke last night or two nights ago, in our own little spectacle. So we have that for Transparent. We're also really pushing people to recognize Judith Light's performance on the boat, when Shelly sang. And Alexandra Billings, who is trans and plays the character of Davina, she was in Faith's musical. And yeah, with Dick, we should maybe just get Kevin Bacon on a horse going down Sunset? Maybe that would be good.

You're in the running to make Emmy history. How are you feeling about that?

It's a little terrifying because I decided not to take the safe bet. I think it's funny, my therapist just reminded me, she said, “Jill, last year you told me you really didn't care if you won, so what's going on this year?" There is something about making history, that word that you are historically noted... it's hard to resist that kind of legacy of feeling like your work matters. Especially as a director, that's one of the most exciting things. Anytime I get some kind of recognition, I think about the women and the gender non-conforming people who are watching it, and I hope that they feel a sense of possibility and inspiration that pushes them a little bit more and a little bit more. That's my favorite thing people say to me when I meet them: "Oh, I saw I Love Dick, and I was inspired to write." Or, "I saw Transparent and it made me want to direct." In terms of my inspiration, it happened exactly that way, where I saw Fish Tank by Andrea Arnold, I saw Tiny Furniture by Lena Dunham, and in seeing those, I just felt like, I want to try this. I want to do what they're doing. I want to try what they're trying. I felt that way about Miranda July and Sofia Coppola, and I think that's the most exciting part about having it be something, like, quote, unquote making history, that it might inspire women and gender non-conforming folks to feel compelled to make their own thing even more.