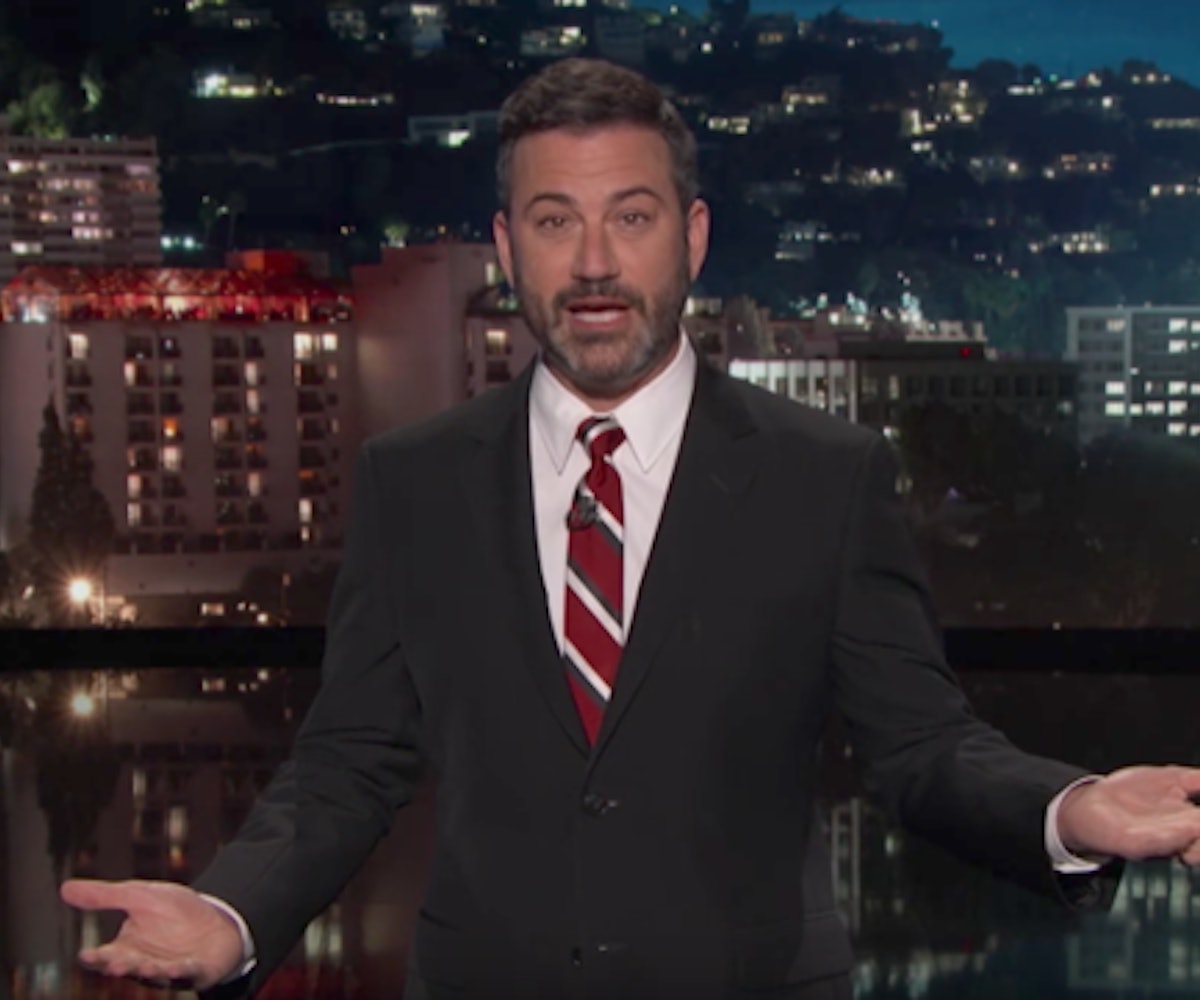 Over the last several days, Jimmy Kimmel has found himself at the heart of the debate surrounding the latest Republican effort to repeal and replace Obamacare. That’s because Bill Cassidy, senator from Louisiana and one of two architects of this latest sham of a bill (the other being South Carolina Senator Lindsay Graham), appeared on Kimmel’s talk show four months ago and told the host that any health care bill he would support would have to cover all infants, no matter their parents’ financial situation. He called it “the Jimmy Kimmel test”; it's well-known that the late-night host made a very public plea for health care last May after his newborn son nearly died due to a congenital heart defect.

The test is currently being put into action with this new bill, which is known as Graham-Cassidy, and it fails completely. This failure is not being disputed by anyone except congressional Republicans who desperately need a win—any win. Oh, and the president has also not disputed it, but he has not read the bill.

Two nights ago, as part of a no-holds-barred monologue, Kimmel called Cassidy a liar. He also admitted that, as a talk show host, inserting himself into this debate isn’t ideal. “I never imagined I would get involved in something like this, this is not my area of expertise,” he told his audience. “My area of expertise is eating pizza, and that’s really about it. But we can’t let them do this to our children, our senior citizens, and our veterans, or to any of us.”

The clip went viral, forcing Cassidy to respond the next morning. He seemed to agree that Kimmel should stay out of politics, basically implying that this bill is way too complicated for a comedian to get. “I’m sorry he does not understand,” Cassidy told CNN’s Chris Cuomo. “Under Graham-Cassidy-Heller-Johnson more people will have coverage, and we protect those with pre-existing conditions.” This is simply not true, and Cassidy, who is a doctor, is basically counting on the public to believe him, a supposed expert on health care, over the guy who invented Mean Tweets.

But Cassidy wasn’t the only one. Many Republicans and conservative pundits, on TV and on social media, basically told Kimmel to stick to celebrity interviews, and to leave the health care debate to people who know what they’re talking about. “Stay in your lane,” was a common refrain. That line of reasoning was immediately called out for its hypocrisy by scores of people on social media.

So last night, Kimmel, aware that he was now a part of this debate whether he liked it or not, went scorched earth on the people who were telling him to shut up. “Oh, I get it, I don’t understand because I’m a talk show host, right?” he began. “Well, then, help me out, which part don’t I understand?” Kimmel then fired off a number of the bill’s huge flaws and the organizations that oppose it. It’s worth a watch:

Kimmel saved the majority of his wrath, though, for Fox and Friends host Brian Kilmeade, who yesterday morning called Kimmel a Hollywood elite who is “pushing their politics on the rest of the country.” Kimmel, who only took up this cause so publicly after realizing that many families facing similar situations to the one he faced could not afford life-saving treatments for their infants, responded in kind:

Thanks, Brian. That was Brian Kilmeade. And the reason I found this comment to be particularly annoying, is this is a guy, Brian Kilmeade, who whenever I see him, kisses my ass like a little boy meeting Batman. Oh, he’s such a fan. I think he’s been to the show. He follows me on Twitter. He asked me to write a blurb for his book, which I did. He calls my agent looking for projects. He’s dying to be a member of the Hollywood elite. The only reason he’s not a member of the Hollywood elite is ’cause nobody will hire him to be one.

And you know, the reason I’m talking about this is because my son had an open-heart surgery, then has to have two more, and because of that I learned that there are kids with no insurance in the same situation. I don’t get anything out of this, Brian, you phony little creep. Oh, I’ll pound you when I see you. That is my blurb. That will be my blurb for your next book: “Brian Kilmeade is a phony little creep."

Kimmel is coming at this not as a pundit, a commentator, or even as the new breed of late-night hosts—Seth Meyers and Stephen Colbert—who have made bashing the Trump administration and the GOP integral to their acts. Kimmel is pleading with citizens to call their senators and voice opposition to this bill not as an entertainer, but as an awakened citizen who became impassioned after he saw firsthand the potential trauma a Republican health care bill could cause families across the country. This is his lane.