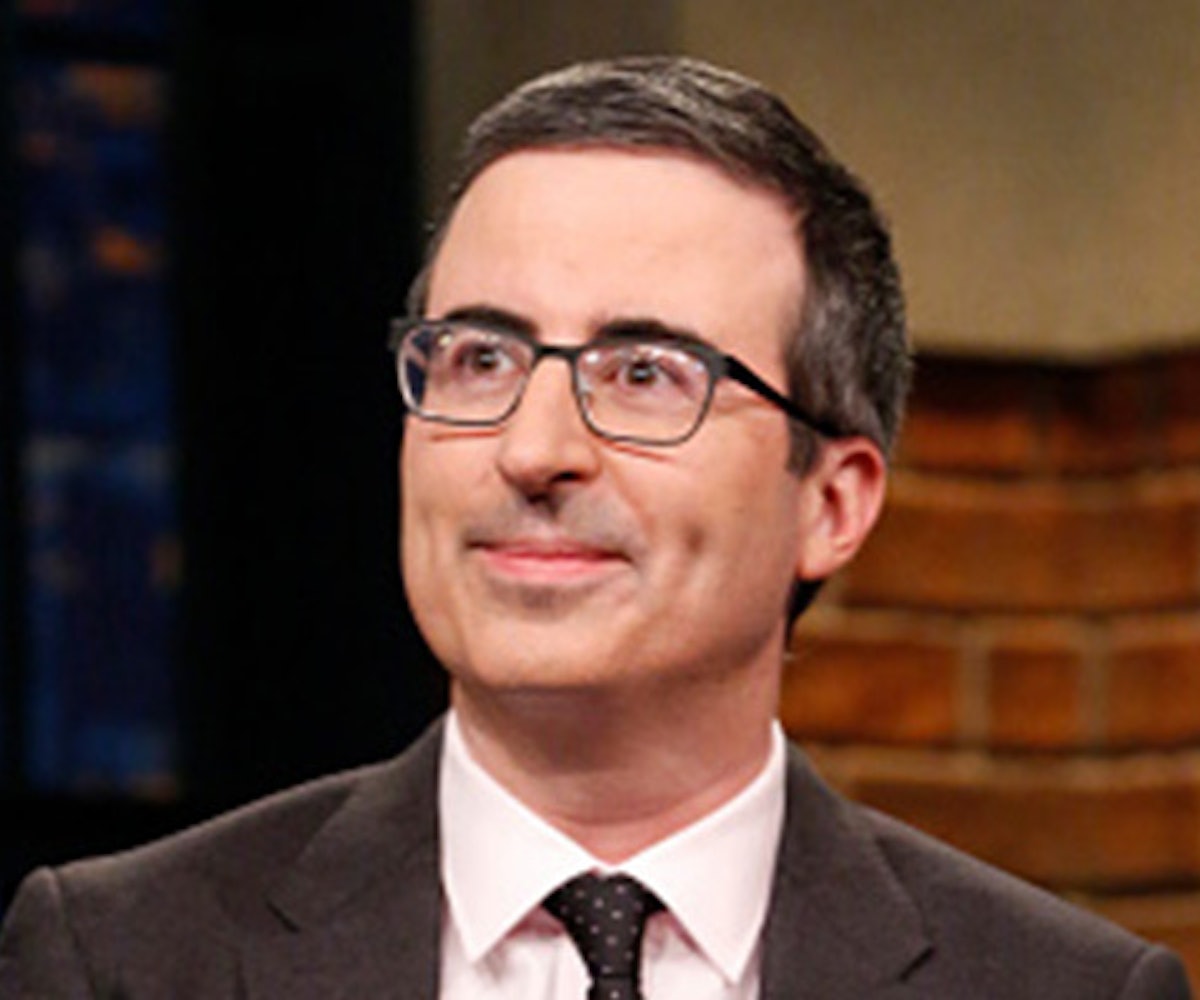 At an anniversary screening of Wag The Dog, a film about the President of the United States making advances on an underage girl, John Oliver moderated a panel with the actors, during which he confronted actor Dustin Hoffman about sexual harassment allegations leveled against him by Anna Graham Hunter. “This is something we’re going to have to talk about because it’s hanging in the air,” Oliver said. Graham Hunter was a 17-year-old intern on the set of Hoffman's 1985 TV movie Death Of A Salesman when, she claims, the actor made inappropriate comments toward her. Oliver told Hoffman he didn't think his response to the accusations was sufficient enough.

In his statement, Hoffman said he felt terrible for anything that he "might have done," adding that it wasn't "reflective of who I am." On Monday night, though, he said, “I still don’t know who this woman is. I never met her; if I met her, it was in concert with other people.” Oliver said it was exactly these kinds of responses that really piss him off. "It is reflective of who you were," he said. "If you’ve given no evidence to show it didn’t [happen], then there was a period of time for a while when you were a creeper around women. It feels like a cop-out to say, ‘It wasn’t me.’ Do you understand how that feels like a dismissal?”

The actor repeatedly accused Oliver of not "keeping an open mind," asking him, “Do you believe this stuff you read?” Oliver replied that he did believe what Graham Hunter wrote, “because there’s no point in her lying.” That's when Hoffman accused Graham Hunter of having other motives, saying, “Well, there’s a point in her not bringing it up for 40 years." At that point, Oliver could do nothing but put his head in his hands. “Oh Dustin,” he said.

When Hoffman defended his behavior as having been the norm on set at the time, the way actors "break things up," Oliver suggested that that's what needs to change. "'The things that happen between takes,' I think, is where a cultural shift needs to happen," he said, to applause from the audience. "What may seem completely fine or normal to a certain group of people can have victims at the other end of it."

Hoffman said that didn't make sense to him, adding that actors are "one" on set. "We are a family," he said. In that context, Hoffman's actions on the set of Death of a Salesman are even more disturbing. I'd be extremely uncomfortable if a family member ever told me they'd like a "soft-boiled clitoris" for breakfast.

During the course of the exchange, Hoffman twisted himself into pretzels trying to explain his actions. He claimed starring in the movie Tootsie was hard evidence he respected women and would never sexually harass them. He blamed his behavior on his generation and the way things were at the time. "What makes me sad is that I grew up in an environment in which we were taught to want the girls on the covers of magazines, the models," he said, somehow in an attempt to relate to the plight of women.

Despite Hoffman not being open to engaging in a productive discourse, it's extremely commendable of Oliver to confront him like this. This exchange is very different from a recent interview with Stephen Colbert and Ben Affleck on The Late Show. Colbert asked Affleck about sexual harassment allegations against him, in which he was filmed grabbing then-MTV VJ Hilarie Burton's boob onscreen. "I don't remember that," Affleck said, even though it's on video, so whether he remembers it or not is irrelevant. While he went on to say nice things about needing more women in power, Colbert didn't press him on other women who've accused him of groping them, the accusations against his brother Casey Affleck, or the fact that he likely knew about Harvey Weinstein's behavior long before it was exposed. Instead, they spun it to be about a need for superheroes and promoted his film Justice League.

“The easy way is not to bring anything up," Oliver said Monday night. "Unfortunately that leaves me at home later at night hating myself. ‘Why the… didn’t I say something? No one stands up to powerful men.’” He's right. They don't. Hopefully, more men will follow his lead.