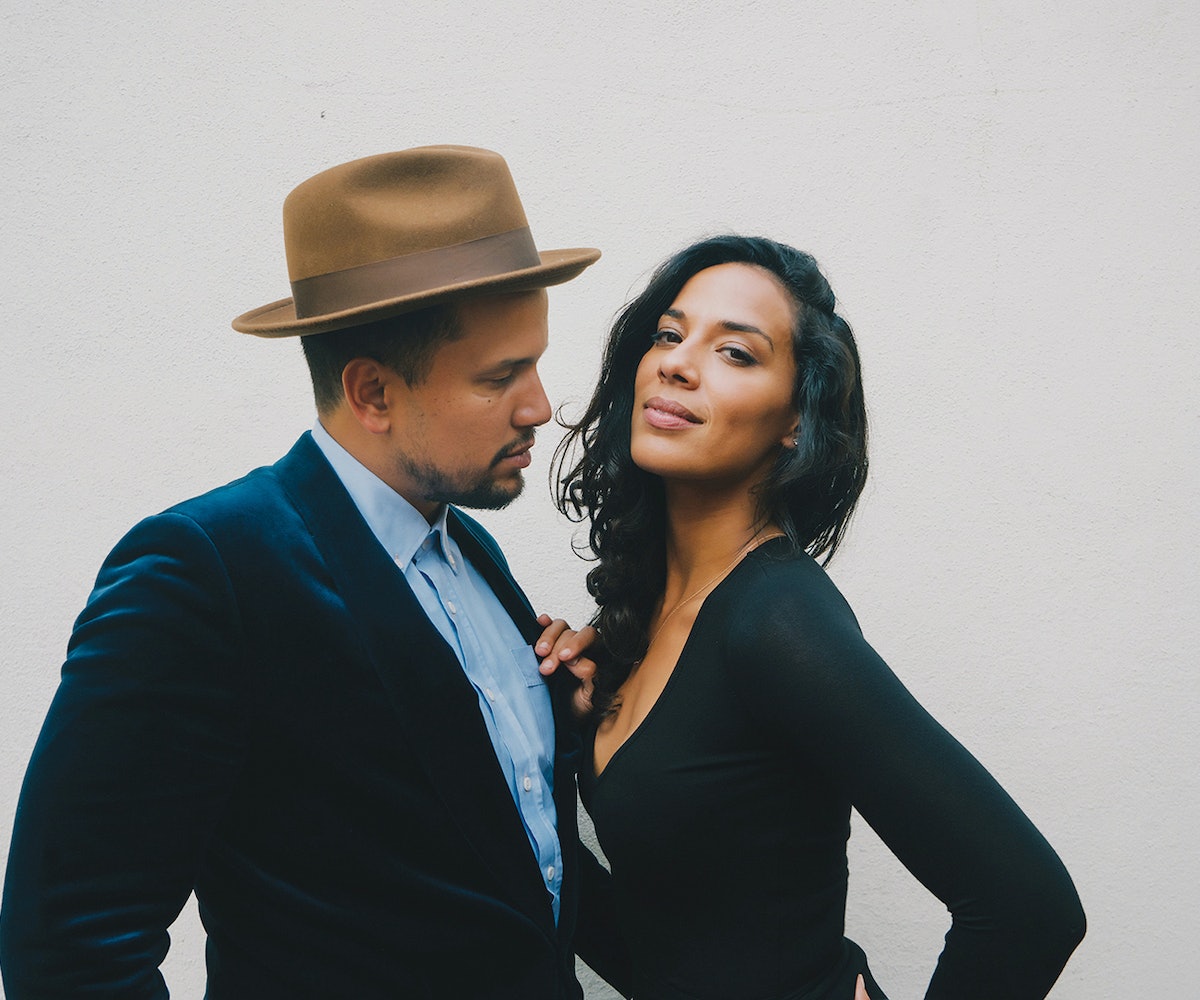 The world that encapsulates the essence of folk duo

is as beautiful as it is imperfect. And like magnets, Amanda Sudano and Abner Ramirez pull and push themselves with their fans into the depths of that realm, creating a critical space for honesty, loss, and love that can be experienced, heard, and understood. The duo's sophomore release,

, is the pinnacle of all those discoveries: that beauty is imperfect, that pain deserves to be felt, and that there is always room for hope in the smallest of places.

Though the band's prior work, including debut album

has been raw and indisputably gorgeous, it's clear that

stands out from everything else they've done. Approaching their sophomore release with honesty as the cornerstone, Johnnyswim emerges with a newfound confidence. Where Sudano's vocals are a burning fire, Ramirez remains icy cool, establishing a series of complementary give-and-take that keeps the listener teetering in a blissful warmth from beginning to end.

"Our EPs and our album

were the seeds in which we discovered that you could make a living doing something you actually love," says Ramirez. "

and get to know the duo behind it in our interview, below.

Since the release of Diamonds, both your professional and personal lives changed in incredible ways. Can you talk about that period of transition from releasing your first studio album and welcoming your son, Joaquin, into the world to now?

I think, maybe from the outside, it looks like it was one big, next level change all of a sudden. But to us, it was such a slow, ongoing process that it didn't ever feel like it was anything overnight. It just felt like a lot of work, but a lot of fun.We've been singing together for over 10 years, and we've played shows in basements with bands that are named things like Feces Eater, in, like, the middle of winter, in like Toledo [

]. But we had so much fun and had all of our friends with us, and we would just go with the flow.

You mentioned that some themes in Georgica Pond reflect on love, legacy, the past, the future, and honesty all mixed together. These themes are also prevalent in your previous work with Diamonds and earlier EPs as well; what sets Georgica Pond apart from these other works?

I feel like all the records have been pretty honest. It's always been our number one goal, so thank you for saying that. In this album, in particular, we were discovering things as we wrote them. We were learning how we felt really about death, how we felt about life, how we felt about having a baby. These songs were therapy sessions for us. We took a more confident step forward, and, really, it was scary for us. These are songs that we had to write. If we didn't write them, something in us would fester. "Georgica Pond" had to be written. "Let It Matter" had to be written.

You mentioned that Georgica Pond is mainly drawn from your own experiences. Are there any tracks on the record that are inspired by other people?

Yeah! So we wrote with a couple of different writers. Natalie Hemby was one that we wrote "Hummingbird" and "Villians" [with]. Britten Newbill, we wrote a bunch with on

as well, and now he's had a couple of number one hits.

He actually came up with "Let It Matter."

We all kind of joined forces on that one. And then, I know with Natalie, she's the one that for "Villians" was like, "Don't you just feel like you love the person and you're so different but the differences are what you love, but you just can't get on the same page sometimes?" And we're like, "Yeah, we know how that is." So we definitely put our own in that song too, like, it's very much us. And I think "Hummingbird" was kind of that way, too. And we'll just sit around—that's how we like to write— sit around food and have a guitar and just chat, and whatever triggers, triggers.

Your moniker and the latest album title allude to a relationship with water. Was that intentional?

It's not. I think I was always obsessed with pirates growing up, and I still am. I bought a big history of pirates book that Amanda laughed at me for off Amazon. And she's like, "Are you ever going to read this?" And I'm like, "Yeah, I wanna read it real bad!" and it's still sitting on the mantle.

She moved it from the mantle [

]. Well, when we first started dating, I used to love writing sailing songs. I've never been a sailor, never been on the water much. I like surfing. I think I've been very obsessed with the theme of water, it feels very poetic to talk about water, seas, and oceans, or whatever. Because I feel like that's always just been on our brain.

I just think for whatever reason we feel connected with the water. It just always comes up in songs.

I love it! I love living in L.A., I love Malibu. We live in the valley, so it's far from Malibu as you can be and still be in Los Angeles. We went to the beach today before we came to town, the day before we left L.A., and there's this little part where you're driving through Las Virgenes Canyon and all of a sudden you can see the ocean, you can see it from 500 feet up on this mountain, coming down you can see the oceans for miles going out. And I feel like I can sit in that spot and write songs until the day I die. For whatever reason, water influences us.

What do you want fans to take away from this record?

I hope that when they listen to this album, that they feel seen, that they feel heard. Because it's always the creative person's existence through high school, middle school; there are so many people that fit every other mold and it seems like you're just in your own mold and nobody really sees, knows, or understands you. And people try to, but they kind of miss the point. I hope that some—even if it's in the smallest way—people that have felt not seen, that have felt absent, that have felt invisible, I hope they listen to this album and feel that somebody sees them, that somebody feels them, and understands them.

I'm not going to say anything better than that, so... [