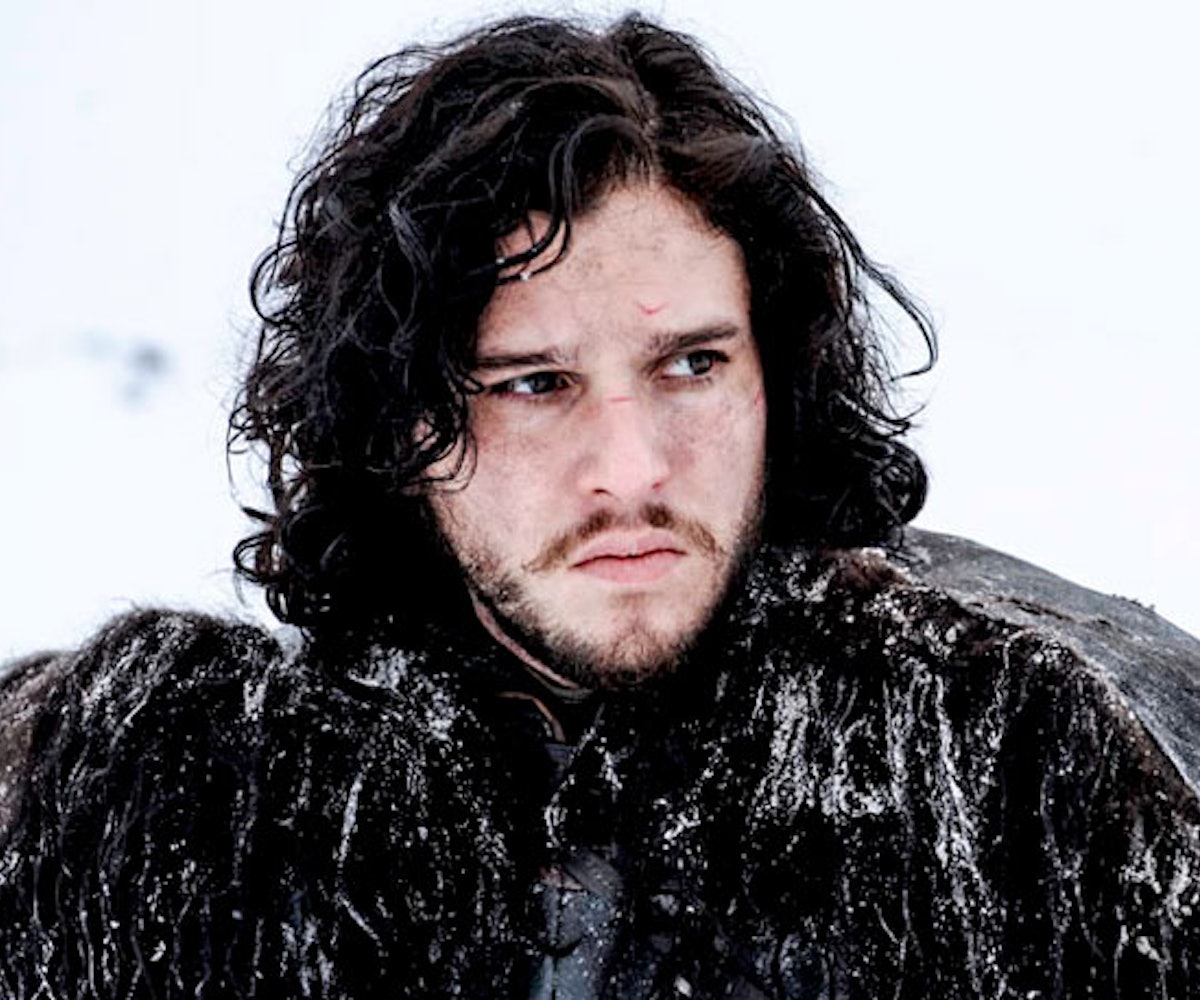 One of the great things about running a website is that you are able to indulge your niche interests and give shine to those small communities not necessarily on your publication's agenda. NYLON loves its pop culture, but unpacking heady fan theory is not for which it is known. But since it is THE topic of the morning, I'm going to doff my super-fan hat and use my power for good. Or evil, depending on which side of the spoiler debate you fall. So consider this your warning: there be spoilers ahead.

Last night, Jon Snow died in a scene that fans have colloquially referred to as "FTW." Not, of course, "for the win" (oh, the irony), or "fuck the world" (well, maybe), but "for the watch," which is the great mutiny undertaken by the Night's Watch after Jon gets them all embroiled in the politics of Westeros**. This may be one of the most discussed sections of the entire series, since the "FTW" scene in the book ends exactly as it did in the show: with Jon presumably dying.

But—and this comes from someone who has read and reread the books, has fallen deep into the forums and Wikis of ASOIAF, and EVEN VISITED THE GODSDAMNED SET in Belfast—Jon Snow is dead, though he is sure as hell not going to stay dead.

Here's why: George R.R. Martin has been pretty darn upfront about Jon walking again, and while showrunners Benioff and Weiss (known as D&D) have certainly made their adjustments, the dismissal of Jon Snow is too core to the story for them to do without his blessing. And if you think about the entire season, nay, the entire

, the showrunners have set up Jon Snow rather nicely.

Let's head back to season three, when Arya escaped Harrenhaal and ran straight into the seemingly insignificant Brotherhood Without Banners, led by a former man of Ned's, Berric Dondarrion. Dondarrion and his dudes basically were there to eff with any folks who had

banner, especially after the desolation of the Stark family at the Red Wedding. Arya, if you recall, challenges that The Hound should be put on trial for the death of her friend the stable boy in the first few episodes of the series. The Hound battles Dondarrion, and kills him. But then, his associate Thoros of Myr resurrects him. Dondarrion admits that each resurrection costs him a lot, but we see it happen. (Rewatch the season three episode "Kissed By Fire" to see for yourself.)

Thoros of Myr (who Tyrion mentions again when he and Varys are in Volantis and he sees a former slave preaching, and he says something along the lines of, "The only red priest I've ever known was Thoros of Myr, and this one is

more attractive.") is a practitioner of R'hllor, or the follower of the Lord of The Light. The show had no reason to show us how Thoros can bring some peeps back from death just to give Arya something shiny to look at, and no reason to remind us again of him two seasons later, unprompted. Nothing that Benioff and Weiss do is just for show (like, you know, the naked poisoning/antidote detour of a few episodes ago), and it is clearly a deliberate and purposeful plant. Especially because the show ditches the entire Lady Stoneheart plotline because two Stark resurrections just doesn't pack the same type of punch. (If you don't know, Google it. Or actually, don't. Explaining it to someone sounds much sillier than it actually is.)

Another practitioner of R'hllor is, of course, Melisandre, who so conveniently stumbles back into the scene right before Jon gets turned into a pincushion. In the books, Melisandre's belief that Jon Snow, not Stannis, is the leader that she needs is so much more clear than the show has made it—though, the show has thrown us some tantalizing bones, too. ("I pray for a glimpse of Azor Ahai, and R'hllor shows me only Snow," she thinks to herself. For the record, Azor Ahai is a legend in her religion about the warrior who will defeat the "darkness" who actually dies and comes back to life. Hrm.) Let's not forgot that in the LITERAL scene before Jon's demise, we see The Zom-Mountain, a character who was killed in last season's finale, come back to life.

The most damning evidence that Snow actually bit the big one comes from Kit Harington himself,

, "But I’ve been told I’m dead. I’m dead. I’m not coming back next season. So that’s all I can tell you, really." Sure, he's dead, but to quote the Princess Bride, he's only

dead. Jon Snow may never be the same (like The Mountain) and he may be truly "dead." But he isn't down for the count. And there are some compelling reasons as to why HBO might take this route—so let's unpack them.

First off, when we spoke to Kit Harington,

he gave us the spoiler about his hair

. Sure, hair length isn't a big deal, but he was very deliberate about his words. Unless we see him with a shaved head, he's still contractually obliged to keep his hair long. (Also, Kit admitted he didn't get a parting gift like the other people who are really, truly dead.)

Secondly, and most importantly, two episodes ago, we were shown how important Jon is when it comes to the death of White Walkers. The Night King finds Jon threatening and fascinating, with his sword that killed one of his lieutenants. (The whole Azor Ahai thing from above has a bunch of sword stuff in the prophecy, as well.)

And what may actually be the most damning piece of evidence that sweet, sweet Kit is looking straight into our eyes and lying through his teeth

is the fact that he is already in Belfast

, begging fans not to take his picture because "the media cannot know he is in Belfast." It'll be a hard bit to keep under wraps but...*pushes up glasses*

...What is most likely here is that HBO, plus George R. R. Martin, are working in tandem about releasing the real fate of Snow. Book readers have been wondering whether he is alive or dead for over four years (though, GRRM himself has given us some clear indication we will see Snow again). It's going to be hard to do, because if

gets released in 2016—as GRRM has promised, though he promised it would be out in 2014, too—it'll spoil the show. Yet, to do some sort of timed rollout, to release the book the second or two we begin to see production stills or hear rumors about Kit returning, would be a 360-degree marketing plan that will entice both show fans and book fans.

The last, and most compelling reason that Jon Snow is not truly dead is, well, the Red Wedding. The Red Wedding will forever go down in media history as one of the most talked-about TV show moments of all time. It was shocking. It was unexpected. And it was brutal. Since then, D&D haven't had the same type of reaction, despite all their rape/murder/burning. It is crucial for the success of the show that they keep surprising us and pushing themselves into the conversation. It is crucial for them to out-Red Wedding even the Red Wedding itself.

However, Jon Snow is a major reason people tune in: He is now a bonafide star. The show has, aside from Ned Stark (which sets in motion the entire series), never killed a real, true star. Catelyn didn't have fanboys fawning, Robb Stark wasn't beloved, and even Ygritte didn't have the diehard following of Jon Snow. He is up there with Dany, Arya, and Tyrion as characters who may be down, but are not out. There is no theory as thoroughly confirmed as the R+L=J theory, which was deliberately shoehorned in this season. And remember: The showrunners don't do anything by mistake, and spending time on confusing backstory just to show how "sensitive" Littlefinger is simply doesn't compute. Lastly, and not leastly, check out this photo from last night's episode. What is that in the blood, I spy?

Your guess is as tantalizing as mine, and I don't think that shape is even remotely coincidental.

So, the fate of Jon Snow is most certainly up in the air, but we will definitely see him again. (One thing I am willing to concede: Kit Harington might not be back next season—at least in Kit Harington form—but Jon Snow certainly will be.) But Benioff and Weiss truly did succeed: Here we are, putting the show in the conversational spotlight, shocked at its moxie and daring.

**Though, it is interesting that they used the FTW scene to remind us of Benjen, which may mean that we are gonna meet Coldhands sometime next season.

more game of thrones news, this way:Kit Harington Is A Hopeless RomanticThe 'Game Of Thrones' Musical Is Everything You DeserveWatch Alfie Allen Play 'Game Show of Thrones'Sansa Stark Red Wedding'd The Red Carpet