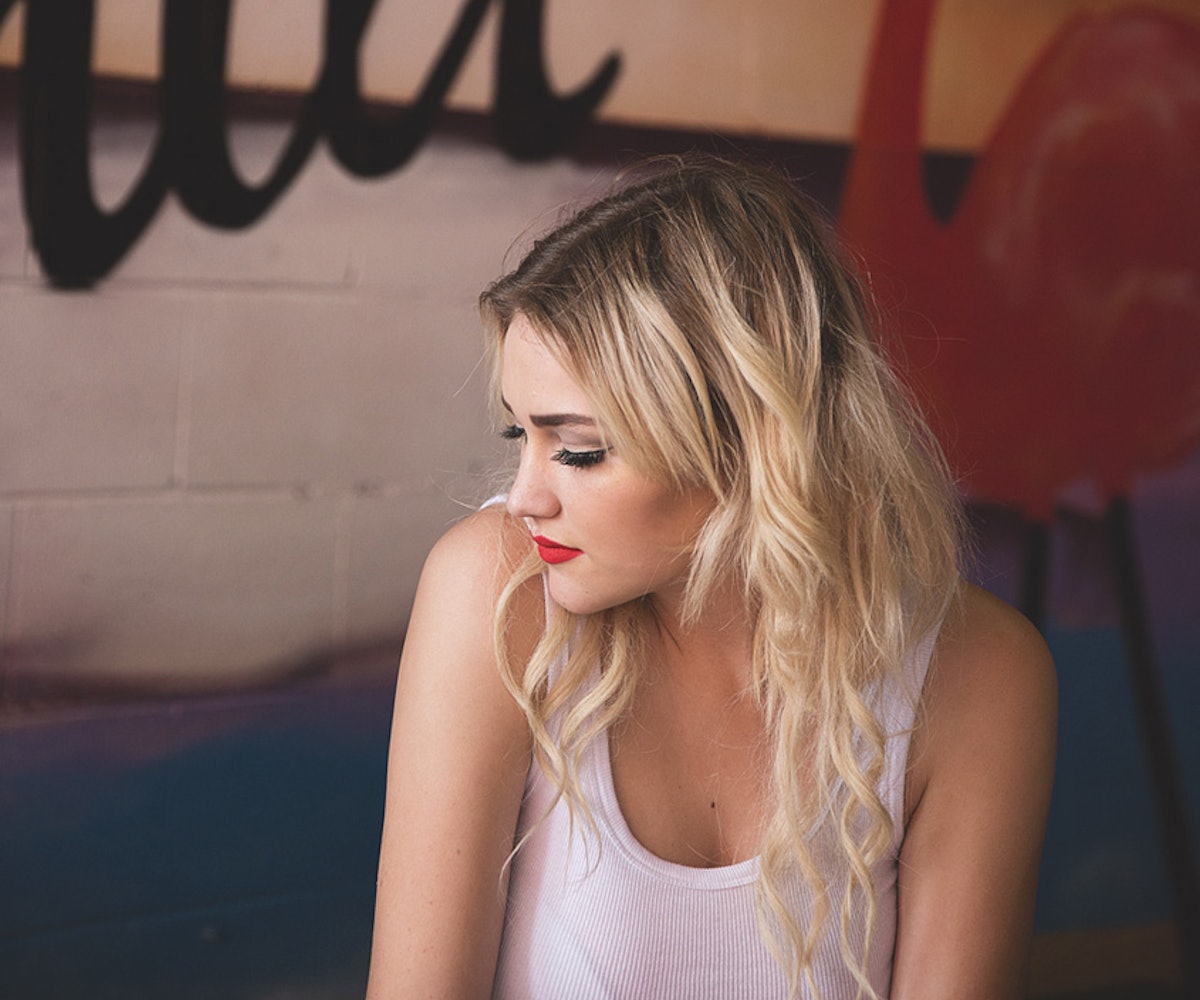 Introducing JOY, the solo-project of 17-year-old Olivia McCarthy, an Australian whose musical abilities seem developed far beyond her years. Maybe she’s an old soul, maybe she’s a prodigy, or maybe she just works hard. JOY describes her own sound as “ethereal-ish, bass-heavy, sneaky pop,” which sounds about right. Recently she gained some attention by posting her incredible cover of Drake’s “Marvin’s Room” on YouTube. Otherwise, she’s pretty obscure. Few of her songs are available online, and she’s yet to release an EP. A talent like JOY won’t remain obscure for long, though; she’s bound to gain fans and fast. Below we get to know McCarthy a little more happy to premiere her new track, “Weather,”

First off all, there’s little information about you available online. Who are you?

I’m just Olivia McCarthy. I live in Brisbane. I make music, but I started making music ages ago. I used to play classical piano—well, I still do, but I kind of had a little classical piano career when I was like 12, and then I started learning different instruments on top of that, and then eventually ended up producing stuff last year, and then ended up online and then everything just happened from there.

Who are you major influences?

I’ve never really thought about it from that perspective. I don’t really listen to a lot of new music. Sometimes, if it’s on the radio, I will. But my parents raised me on Fleetwood Mac and The Eagles and Enya and stuff, so that’s all we really have in the house. I wasn’t really allowed to listen to Eminem, you know, and different types of people. I was only allowed to listen to what [my parents] thought was good music, and it is. So I’m probably influenced by them. When I first started really badly making demos on GarageBand, everything would just be totally ethereal, and I was all about making soundscapes, and I guess that’s kind of where the Enya influence comes in. I guess with songwriting, I’m a massive fan of Stevie Nix. Everything she does is perfect.

I first found out about you through your incredible cover of Drake’s “Marvin’s Room.” How did that happen? Did you ask Drake for permission?

To be honest, we didn’t, because it wasn’t a big thing. It was meant to be a fun thing, but then it ended up doing a lot better than we planned. So, I guess I probably should of, but I think so many people cover his stuff that it probably wasn’t a big deal—it probably was, but I mean…That kind of just came about. My manager always gets angry because he’ll be like, “Can you finish this demo today?” And I’ll get home, and I’ll try to sit down and do it, and I’m just not vibing. And so I started at a completely different song, and I ended up sending back—I was just using the same chords, which ended up being used in “Stone” in the same key, and I was like, “Oh, this sounds like Drake’s ‘Marvin’s Room,’” and I just started plugging some stuff into Ableton, and then I was like, “Oh, this could be a cool cover.”

Hypothetically, if one day Drake were to ask you to collaborate on a track, how would you react?

I’d probably touch his face. I don’t know. I’ve never really—you wouldn’t know what you would do until you’re in that situation. You always plan to say something really smart when you meet someone famous, and then you end up stuttering, and acting like a complete idiot. Dang, I don’t know. Well, I’d probably say, “Yes please,” but I mean, I’m not sure if I would scream or not.

Creating something that you believe in and stand by is not easy. How do you accept and put trust in yourself as an artist?

I guess it’s like, you make music for people, but you make it more for yourself. If you look at my laptop, all the stuff that I used to make—I used to just sit in my room and make it so that I could listen to it when I’m going to sleep, and so I never really thought about having other people listening to it. And then my friend was like, “Oh, this stuff’s really cool, you should put it on SoundCloud,” and so I was just uploading really weird instrumentals tracks and stuff, and I mean the only people that would listen to me making music or playing the piano was my mom. So I guess you kind of just have to trust that if you will like it, other people will. I mean, not everyone’s going to love it, but there will be people who like what you make. So it’s just kind of a stab in the dark. You don’t really sit down and be like, “I’m going to write this massive pop song because people will love it,” if you hate it.

How do you deal with doubts and insecurities as an artist?

I don’t know. My friends will tell me to shut up because it’s good. But I mean, I’m so picky about what I release, and everything has to be so perfect, and so I get really insecure as well when I send unfinished demos around. I don’t want it sent around because I’m like, “This is not good enough.” But I mean that could keep going forever if you don’t really put your foot down or someone else doesn’t put their foot down and be like, “No, it’s fine. You’ll just overdo it if you keep going.” So I don’t know, to be honest.

Writers and poets often speak about having an ideal reader, someone who reads their work precisely as they’d it like to be read. Do you have an ideal listener?

My demographic is so randomly spread out, and most of it is probably my mom, in a sense. Just the age span of people that look at my stuff on Facebook or on SoundCloud is so broad, and so international, so there’s not one type of person that you focus on when you’re writing. It would be mostly on your experiences, like if you were writing about a breakup or whatever cheesy stuff, it would be from your perspective, and then I guess certain people might have been in the same situation, so they might connect with it. But then again, other people can picture what it’s like, so I’m not sure.

Do you intend to do anything in particular with your music?

I don’t know. It’s kind of hard with the JOY project, because everything is like the same brand, whereas I want to make like a hundred million stupid EDM side projects and bangers, just because it’s fun. But at the same time, that has a very short lifespan and no one’s really going to listen to it. You get different vibes from different types of music. If you’re playing a show to fifty people in a room, they’re all just listening to the songs, whereas if you’re playing at a festival in front of twenty thousand people, they’re listening to the beats, and it’s more of an energy thing. I mean, if people like it, that’s sick, but there’s a lot of different types of stuff I want to try out to see how people react, so I don’t know.

How does it feel this early on, at your age, to be tempted by the prospect of becoming famous?

I think that’s kind of a random question. I don’t even know. People are like, “You’re going to make it,” but I’m like, “What does making it even mean?” If you woke up and you were Beyoncé, then you could say that. But I mean, playing at festivals is just like, “Hell yeah, this is super sick.” But I mean, it’s just like a really slow, kind of gross thing. I mean, a year ago I was just a high school student, and now people will recognize you when you’re somewhere, but that’s not really fame; that’s just being at the right place at the right time. I guess being at a level where you can sustain yourself and pay rent and stuff would be sick.

Do you have any plans for an EP?

Yeah, there’s the mini one coming out with Weather—there’s just another track in there. And then I’ve already started writing the next EP, which will be like a 6-track mini-EP type thing—kind of a different vibe again. I just want to try different stuff out. But I was trying to aim for that to come out probably in July or August, so it’ll probably end up coming out in 2017. No, I don’t know. I want to get it done this year.

Where do you see yourself in 5 years?

I always wanted to be a film composter, just be one of those badass 60-year-olds who sits in their mansion in LA just writing orchestral bangers for films and stuff, but I mean I have no idea. It’s hard to picture what’s going to happen in the next year, even. It would be cool to be playing festivals and shows in five yeas and have it still going. Some people only do it for two years, and some people do it for fifty, so I don’t know. That would be sick—just to be able to still do music, and not have to be at uni.