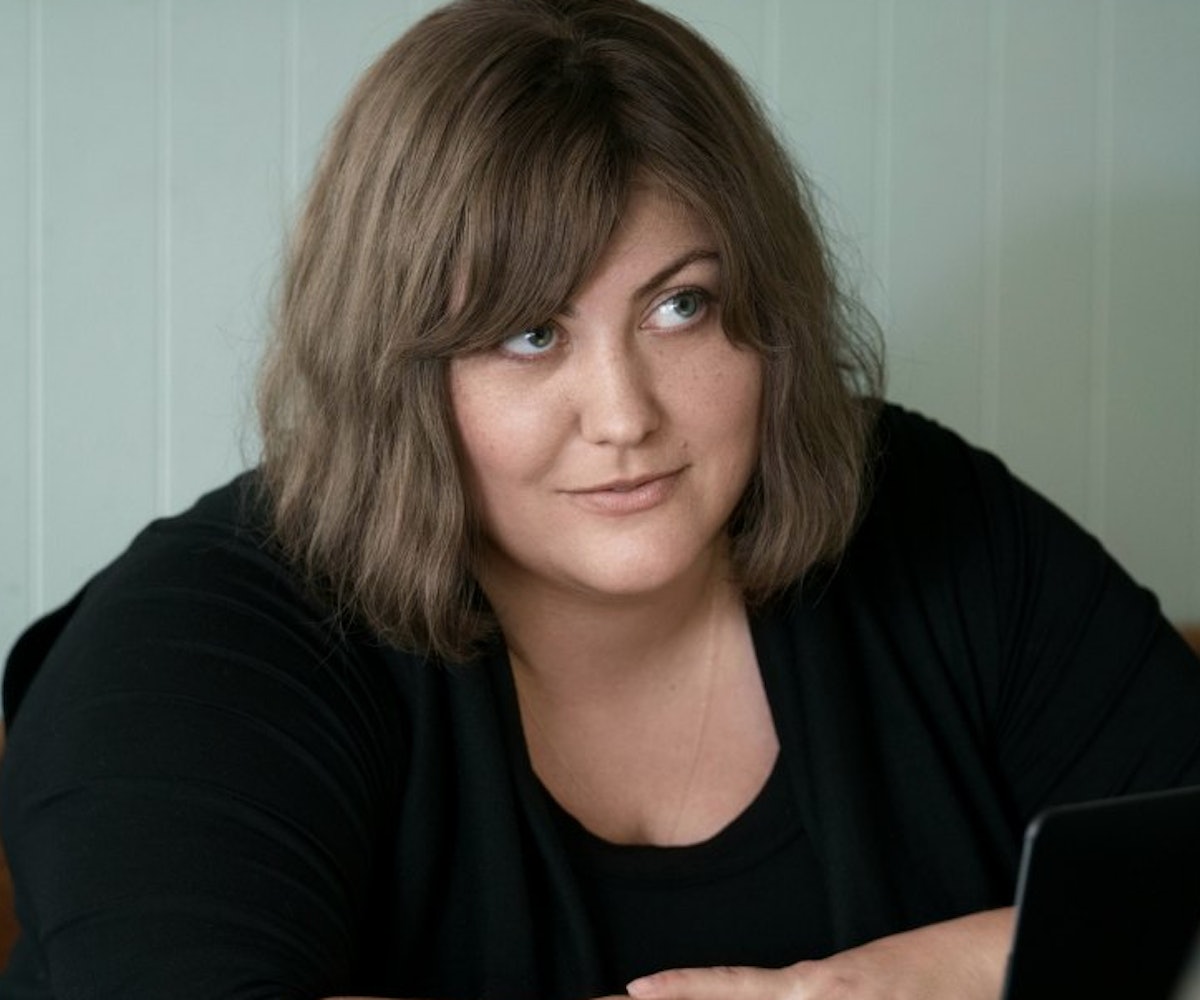 Counter to what you may initially imagine about a show called Dietland, Marti Noxon's adaptation of Sarai Walker's best-selling novel is not about a woman attempting to lose weight. Instead, it's a dark comedy skewering the sinister side of "the dissatisfaction industrial complex."

From the time we're little kids, we are implicitly taught that the key to being healthy, successful, and loved is looking a certain way, and having a certain body type. This is something that Dietland's Plum Kettle knows all too well. A ghostwriter for the advice column of a glamorous glossy's editor-in-chief, Plum begins the series as an overlooked and underappreciated cog in the fashion industry machine. Most shows would just work off this premise, and probably have Plum either lose weight to feel good about herself or grow to love her body just the way it is. However, Dietland is not most shows, and so Plum's journey actually involves getting to know a group of women vigilantes who abduct (and kill) male predators. Intrigued yet?

Dietland is an incredibly special show, one of the few unafraid of tackling the patriarchy's sinister obsession with crushing women's self-esteem so they're more eager to buy products to "make them better." But it wouldn't be anything without its star: actor Joy Nash, who wants to make it clear that she will never want to peddle another narrative about a woman trying to lose weight. In fact, over the course of the show, her body doesn't change at all—and that is what makes this show so revolutionary.

Ahead of the first season's finale, we spoke to Nash about what it was like to work on such a groundbreaking show, as well as why she feels that it's important for us to explore stories about fat people that aren't exclusively about losing weight. Read our Q&A with her to learn more about the misconceptions about fat acceptance she wants to tackle, her hopes for a more diverse kind of representation in the near future, and what it feels like to finally be front-and-center.

Tell me a little about how you got involved with the show and why you felt like you had to be a part of Marti's vision.

I got involved when I saw the character descriptions. I had never seen anything like it. So I found out where the casting office was, actually went there, and handed them my headshot. The casting associate asked me if I had read the book and she was like, "You really should." So I literally went straight to the library and spent the next evening reading it... and I was even more blown away. To be able to work on a project about something that you believe in, that's never happened to me.

What did you love about the book? What blew you away about it?

I hadn't seen a story where a fat person was the main character, and the story wasn't exclusively about her losing weight. It doesn't come at it with the attitude like, "Once you're thin, everything will be perfect."

Did the title make you nervous at first?

A little bit, yeah. Dieting is something that I don't do in my life. But, yeah, I quickly got over it.

How does it feel to have your first starring role on a major network TV show? Especially as a character who so vehemently eschews the tropes typically assigned to plus-sized women?

It's a total dream. I mean, I haven't had to play the person who is slaving away to become a thin person before, but I also feel like nothing like that had ever come to me. It's easy for me to say, "Oh, I didn't want to do those other things." I did, and probably would have, if I had ever been given the opportunity, but I wasn't.

Honestly, though, I was creating a lot of work for myself, because I wasn’t playing characters that represented me. [The only thing I did was this] solo show, [My Mobster], for 10 years, but nobody was interested in it. But I would rather [remain in obscurity] than do something that doesn't fulfill me.

Do you think Dietland is the beginning of a new wave of body positive shows on major networks?

I hope so. It feels like there's a number of… I mean Chrissy Metz's character on This Is Us is definitely a great example of representation. I just feel like the more fat people we can get on TV, the better. Because all of our experiences are so different. We're not a monolith. We need even more diversity between everything—race, gender, orientation, everybody needs a spot at the table.

I don't know, because I've been watching British TV, and they have fat people on all the time. I don't know what it is about American media. We are really scared that you're going to change the channel if you're offended by what you see in front of you, which is so ridiculous.

I mean, the idea of even being offended by a diversity of body shapes is kind of crazy.

Yeah. Personally, the media I consume and the way I curate my feed is to show as much diversity as possible. I only see it as an asset when something is strange and unique. That's what I’m interested in. I don't understand why somebody wouldn't want to see that.

So was there ever a moment that you had on set where you stopped and said, "What I'm doing is so essential?"

Yeah. It was kind of strange. I had a stressful situation with a subletter, and there was a problem with my apartment. I was really worried about what was going down, and I was like, "Ugh, am I going to get evicted? What's happening? Is the house going to burn down?” I was so stressed out about that. It was all I would think about. I would come off of a scene, and I'd be checking my phone like, "Oh my god, is everything okay?" Finally, at one point, I just had to pull up my big girl panties and say, "Joy, what you're doing is more important, even if you get evicted, even if your house burns down. What you're doing here today is more important than any of that. So, let it go." Which I guess is a really myopic way of looking at it.

What struck me about Dietland was the dark, vigilante aspect of it. How do you even prepare for something like that?

I hope I did it justice. The way the season works out and the way the script is set up, Plum is really so overwhelmed and ensconced in her weight loss drama that she doesn't see any of it happening. I wasn't like present when they were shooting people being dropped from the bridges—that wasn't of my concern until the later episodes when it’s like, "Oh shit. Things are going down. I've got to train all of a sudden."

I don't know if I did enough, or what. We were shooting for 16 hours a day, so it's kind of doing what you can in the midst of that. And the truth is, I'm not—and Plum isn't—an action hero. So it's not like I need to be climbing the rope, or whatever.

What was the most intimidating thing about this role for you?

I think it was the people who I was working with. I've been working at this for so long, and I thought I knew what big-shot producers, powerful people were like. Then, when I actually met them, they weren't like that at all. They're kind, generous, and the biggest fans of what we're making. I didn't anticipate that at all. I thought of people who are gatekeepers as twisted, angry people, and that just hasn't been my experience here.

What do you think is the biggest similarity between you and Plum? The biggest difference?

When I'm watching the show with my friends, they'll say, "Oh, you're so different from this character," but I don't feel that different at all. I think I'm as vulnerable and sensitive as she is, but I absolutely, under no circumstances, show people that.

What is one major misconception about the body and fat positivity movements that you think still needs to be addressed?

It's probably one of many, but I feel like acting like a person has all of the answers is going to get us into trouble, always. So holding anybody up on a pedestal like they're perfect is a problem, because nobody is perfect.

What do you hope is the main takeaway for viewers of Dietland who may also be struggling with body acceptance and self-love?

I hope that it gives them the confidence to realize that their life has already started. This is your life. You can't keep putting things off, because time is ticking away. It's our only non-renewable resource, right? I mean they talk about the beauty or the dissatisfaction industrial complex, and how the media sells us on problems we have, so they can sell us a solution. I think if we overturn all of that and focus on what we care about—what each individual person cares about—that's what is going to make you happy. Not solving a problem that you didn't know that you had before you realized there was a solution you could purchase.