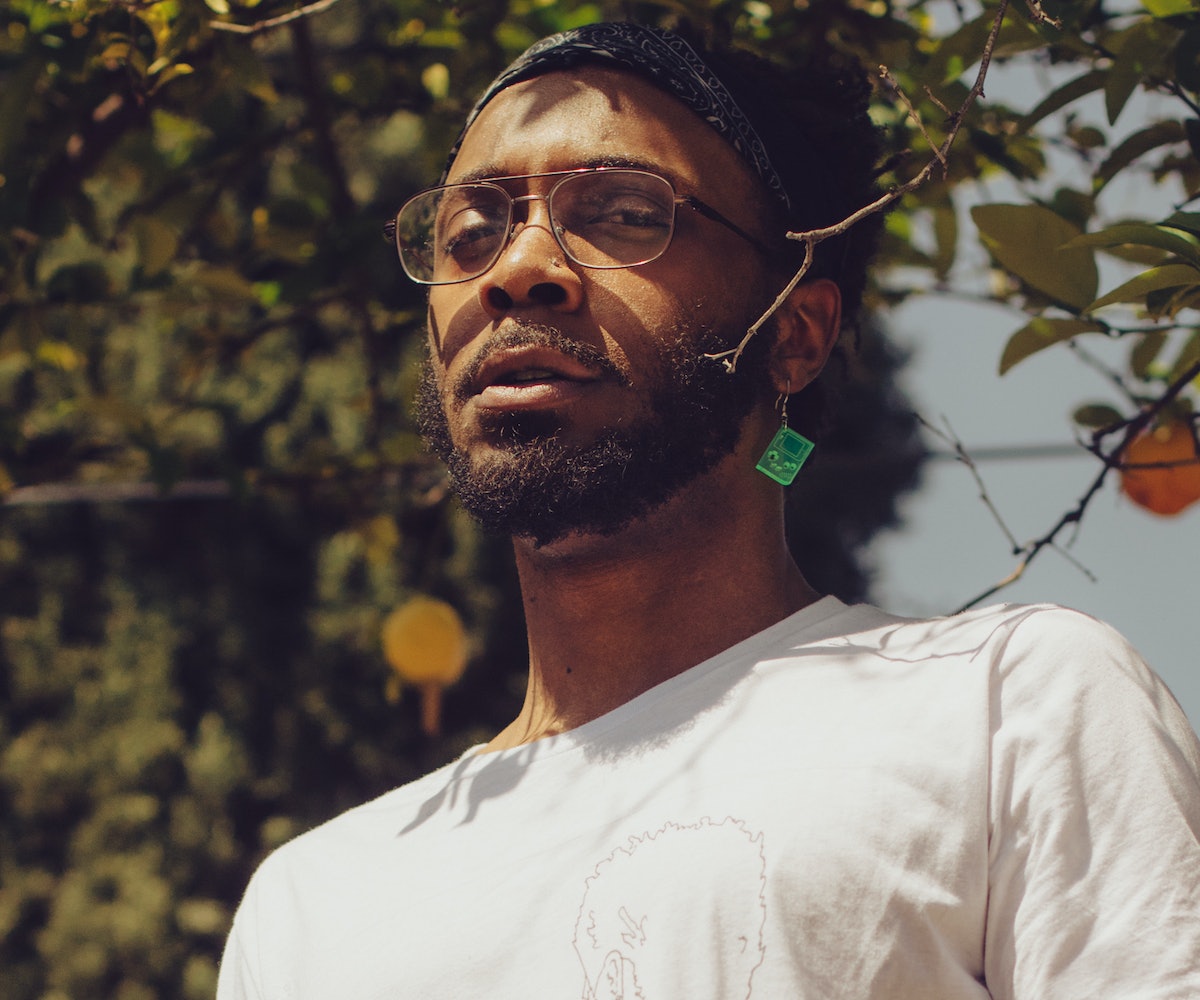 If there's anyone who can take the internet edgelords and trolls down a peg, it's JPEGMAFIA.

The alias of Barrington Devaughn Hendricks, JPEG—or Peggy, as he likes to call himself—has long been a contentious figure in underground rap. An Air Force veteran who spent his teens moving around the Deep South, Peggy began seriously working on music while he was stationed abroad. After being honorably discharged, Peggy ended up settling in Baltimore thanks to its radical art scene, which is also where he recorded his critically acclaimed EPs, Darkskin Manson and The 2nd Amendment, as well as his full-length debut, 2016's Black Ben Carson.

Unapologetic, quick-witted, and a brazen provocateur, the producer-rapper is an astute observer of the hypocrisy that tends to color his interactions with other people. As he puts it during our conversation, there's no point in beating around the bush, and naming his songs things like "Cuck" is his way of turning the lens upon those who delight in spewing toxic rhetoric. However, labeling Peggy's approach "trolling" isn't quite accurate. Because in combination with his no-fucks attitude, Peggy's proved that sometimes facing the bullshit head-on can be enormously effective—just look at the countless internet forums dedicated to spinning their wheels over his work.

So ahead of Peggy's August 25 set at Brooklyn's Afropunk Festival, we sat down with him to talk white liberalism and his latest album, Veteran, as well as get his thoughts on being constantly dogged by all that "edgy" rhetoric. Read our Q&A with him, below.

Tell me about your experience of making music while you were deployed. Did your time in the service affect your art in any way?

I honed my craft in the military, because it's the only thing that got me through it, to be honest. Working on music—being able to come home and work on music whenever I got off—was essential. If I didn't have that, I probably would've lost my mind.

[Being in the army also] validated opinions I already had. It was just like... you hear about things, and then you see it in person, and you're like, "Oh, shit, this is it." I experienced all the forms of racism available in 2012 there.

Sometimes you might not even detect it. But that’s the thing. The one I see used the most is that roundabout way of racism, where people will like come out and be strongly against or for some random-ass thing, but it's actually just a coded way to get their racism out. For example, the Colin Kaepernick shit. All of a sudden, everyone’s like, “Oh, he's kneeling. I'm pissed. I'm a patriot, how dare he kneel.” But, it's not really about kneeling.

I’ve said this before, but like if all n***s decided to start swimming, then Fox News would be like, "Oh my god, there's a problem with pools, yo. We have to figure this shit out." It's not about the shit that they're talking about, it's just that they're racist, and they don’t want to actually say that. So they're just letting it out like, "The flag!" But what they're really saying is, "You black people need to follow orders. Don't disobey. Don't do what we don't want you to do." That's the most common type of racism. They wanna like be racist and just not get any pushback for it.

A lot of your work is identity-focused, and Veteran's no exception. That said, recently, a lot of POC artists have begun pushing against this, because they sometimes feel tokenized by it. Like, they feel like they aren’t able to talk about normal things.

You know, I think that's the point. That's kind of like why I'm screaming like this. People of color, in general, are just put into boxes anyway. In spite of all this progress that we've made and all the calling out, it's the same shit. We still get tokenized. And that's a big part of the reason why I say the things I say, because I'm aware of that. I'm aware that if I make a country album and release it, and it gets on the Grammys, the Grammys are going to put it in the Urban category. Just my blackness automatically sets it in there. And it’s little shit like that why I have to say the things I say and operate the way I operate. We have to change everyone else's perceptions. But since that's basically impossible, it's like, what else am I supposed to do?

Except scream it straight at your face! So that's why it's funny to me when people come at me, and they're mad at something I might've said about a white person on record. When I was 15 in Atlanta, somebody sat me down in class and made me listen to this song called "N****r Hatin' Me" by Johnny Rebel or some shit. I listened to the whole fucking song. I was like, "Noted. I've heard the song; I'm aware of it now.” Now, I say "cracker" on a song, and they are super-pissed. But, a lot of things I do is just pointing the finger back at them. Doing the same things they do to me, and just being like, "Oh, so you don't like it, but you expect me to?"

So what would you say to the people who say “violence begets violence?” Because I know you get a lot of stuff like that.

On that note, you do name your songs pretty polarizing things. Like "Cuck" or "I Might Vote 4 Donald Trump." Why?

The thing is, I named these songs on purpose, but it's rarely for the effect people think. Like, you search through any Reddit comment about some shit that I did, and it's usually filled with people who just don't know what the fuck they're talking about. Or, just like, sum up all my talking about black things and black issues into like, “He’s edgy,” or some shit like that. Because that's how they see black issues and people of color issues: as a gimmick. It's like a thing for them to do. They don't realize, like, I can really be shot by the police type shit.

But [with the titles], when I make a statement like that on a song, I try to back it up with the music. I won't usually name a song until I'm about to release it. I've already had the feeling—everything for the song is there but the name. So the name is the last thing to come. That's why sometimes it's like some crazy shit because I'm just like, "What does this song really make me feel?"

It's funny that you say that because when I was reading about you on the internet, "edgy" was always the descriptor. How do you feel about that?

It's projection. Because I'm really not, I'm just talking about things that they find offensive. Whereas when they talk about things I find offensive, it's not edgy to them, it's just art. I'm literally watching them call me edgy when I will have a song about some black issues. To them, that's edgy because black issues are a gimmick to them. So, essentially, a black man talking about black people shit is edgy to them, because they don't actually give a fuck about what they say they give a fuck about. If you're from fucking Boston and you're talking about Boston issues, I'm not gonna call you edgy for doing that—that's just like what you do. You can talk about that all day because it's your reality. But to these people that call me edgy, they're projecting... I'm not in the same vein as [a purposefully provocative band like] Anal Cunt, or like some crazy fucking super-edgy-ass band that's like talking about nothing but trying to get a rise out of people? No.

I think, to me, the word “edgy”—at least when applied to concepts like internet edgelords—also connotes this kind of nihilism. Like, "I don't really care." And you care.

I definitely care. But, like I said, they're projecting. Because if you listen to what I'm doing and think about why I'm doing it, it's very clear. But to them, they don't have that connection, because they'll tweet about Black Lives Matter, but they don't actually give a shit. So yeah, it comes off as, "Oh, he's being edgy. He's using these black issues to get attention again." But it's like, no, this is a reality. Like this could be my kid I'm talking about.

Speaking of, there has been some discussion about how you do have a lot of white, liberal fans.

I mean, it is what it is, man. I live in fucking America; it's full of white people.

It’s like, if someone wants to help, I'm definitely down for them to help. I just don't like people who are disingenuous. I've been black for 28 years, and I can confirm that all these n***as that be walking around in fucking Williamsburg [in Brooklyn] writing these articles now about people of color issues, definitely weren't writing about them as far back as even 2015. And I know that. because I'm black, and I exist.

Just be genuine. If you're a racist, and you don't fuck with n***as, then just do that. Don't play with me, I'm not to be played with. Especially not with white people, because white people play with everybody. So, I'm not playing with these n***as at all.

As a black person, I have two parties to choose from: liberal and conservative. If I choose to be a liberal—regardless of who I choose—I'm picking the lesser of two evils in my mind basically. When I say lesser of two evils, it's like, I can be over here with some disingenuous liberals and some people who are genuine, or I can be over here with fucking rednecks who clearly hate n***as and they're just pretending not to for whatever reason.

White people make up most of their country. So, numerically speaking, yeah these are the n***as that have the expendable income. Like, you take all these fucking white people, like 70 percent of the country, break that down into n***as who might find me, and there's your fucking answer. I feel like people come at me with this question, in order to find some weird chink in my armor to be like, "Oh, but you're not talking to black people though."

I get where you’re coming from. I think that question just came from a place of genuine curiosity because every white dude I know loves you.

It's just that I've been asked this question in a malicious manner. Like by people that'll be like, "So you know, you talk about black people stuff, but when you go to your shows, it's just white people, what's up?" I understand what they're trying to do, and again it's very disingenuous. It's just like, go to anybody's show. Go to Kendrick [Lamar]'s show. Are you pulling up on Kendrick and saying that? I don't think so… But, n***as have asked me in interviews before like straight-up with the intention, like trying to make me look like I don't like black people or something.

What do you even say to that?

I usually answer it in that way. And then I've seen people say, "Oh well, he's giving a cop-out answer saying there are mostly white people in the country," or some shit like that. I can't say anything after that because I've presented you the information. I've presented you my side of the story. It's logical.