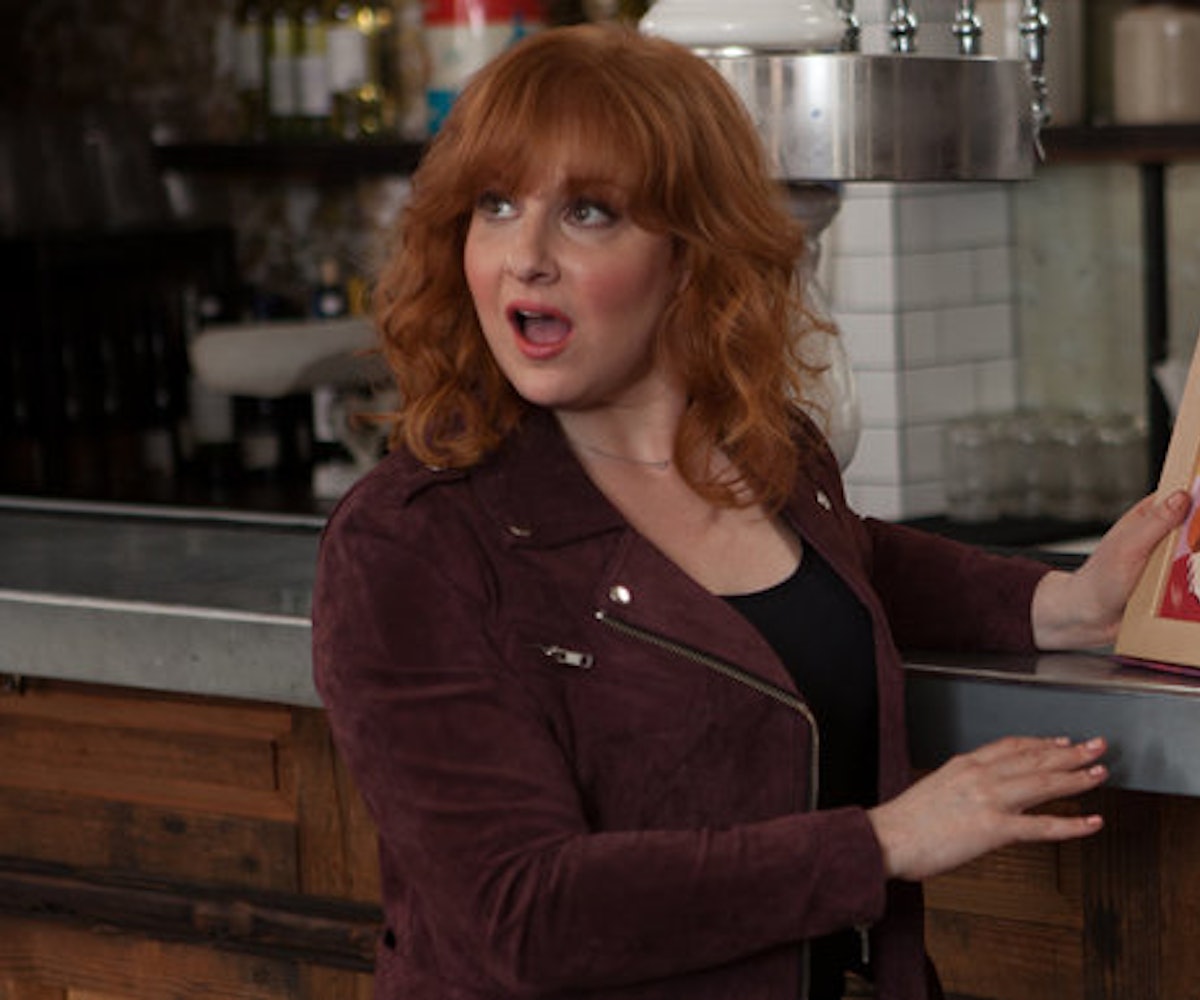 Hotdog water, tuna-eating train passengers, rats simultaneously eating and making filthy love to other rats—New York’s a rough town, and in the newly unveiled third season of Hulu’s outstanding sitcom Difficult People, Julie Klausner is nothing if not a product of her environment. Along with partner-in-curmudgeonry Billy Epstein (man-on-the-street sensation Billy Eichner), she’s the platonic ideal of the lovable misanthrope mold. She uses worker strikes to cut lines and lies about her big Woody Allen audition to salvage her feminist bona fides, but she’s just funny and vulnerable enough to get away with it. You’ve got to play a little dirty to get by in a city as dirty as New York, and you’ve got to stop just short of abandoning all your principles if you want to make it in show business.

As Difficult People creator and star, Klausner built the show’s main character as her alter ego, and yet she’s not nearly as perma-cranky as the TV industry wannabe she portrays. Though she’s got some venom reserved for targets like Nocturnal Animals and Allen, she’s mostly just glad to be working on something that clearly means the world to her. Klausner spoke to us about mounting her first season in a post-Trump world and why she can never leave New York.

You and I spoke around this time last year for a piece about season two [of Difficult People]. What’s been the biggest change in your life since then?

Oh, gosh, I don’t know! I don’t do a lot besides make this show, which I’m comfortable with because I’m proud of it and love it so much. All the changes in my life would probably be just the new episodes. I don’t know if that sounds pathetic or not, but yeah, I don’t have that much of a life outside of churning out these babies.

Is it rewarding to immerse yourself in one purposeful task like that?

It feels good because the show is totally me. I have the privilege of making the exact show I want to make. It’s so personal. It’s got my name on it, I get to play someone with my name. I get to have—well, I don’t wanna say “control,” so I’ll just say that I’m lucky to have this opportunity. I try to spend whatever time I possibly can to ensure it’ll be as good as it possibly can be.

There’s the major change of this being your first season in Trump’s New York.

Yeah, that’s a big change that I’m constantly afraid. Whether it’s that I will no longer be able to determine my own destiny because of my biology, or because we’re all going to go kablooey by North Korea, it’s a little terrifying. And super-depressing.

Absolutely. The first day after the election, I’ll never forget being in the writers’ room and being so depressed, so in shock. It was actually really nice to be able to focus on some of the stories that we have on the show that aren’t in that world. It can be a good distraction. My hope is this season can be a good combination of that distracting material and imagining a world in which, despite horrors around it, characters are surviving and thriving. The current world kind of justifies a lot of Julie's and Billy’s bitterness. It’s grown more relatable, to have this point of view, that the world is garbage. They’re not as alone in believing that.

The opening scene of the new season sees Julie and Billy protesting a play by jumping on stage in a fashion reminiscent of the disruptions at Shakespeare in the Park over this summer. But that can’t have been modeled after that, right?

Right, we wrote that back in the winter. Instead of people protesting the death of an emperor in an ancient play, it’s Billy and Julie protesting the network trend of drawing upon a multi-cam to populate the cast of a beloved musical. I do think that Billy and Julie are resisters—in their own way, though. It’s for their own benefit. But we live in a world where protests are everywhere; it’s part of the social fabric now. I will take credit for predicting that, however. I will definitely take credit for the show being prescient because I completely intended it to be. Thank you.

Later on, Billy contemplates leaving New York. Is this something you’ve considered yourself?

I love New York. I don’t really see myself surviving in any other city long-term. I like L.A. just fine, but for me, and especially for the world of the show, New York is a more “difficult” city, so to speak. And everybody in it echoes that, like Julie's and Billy’s attitude. It’s a love-hate thing, like show business. They love to hate it. Part of them wants to escape, but it’s never gonna happen. They need it. The show could only take place in New York.

There’s something kind of comforting about the idea of knowing the one place for you, but a little scary as well, like you’re trapped.

Especially when global warming destroys us all and the island of Manhattan sinks into the sea.

Another episode in the new season tackles the ongoing controversy around Woody Allen. Your show has always made fun of celebrities, but he’s a much bigger and more sensitive topic than most. Was there any trepidation about taking that on?

No trepidation at all. We watched clips from Woody Allen’s Amazon series, and it was so shockingly bad that we felt like we owed it to the world to deal with it. I had never seen anything lazier or crappier. It was shocking! And Miley Cyrus being in it, ugh.

And Elle Fanning! Listen, the guy clearly finds young women inherently fascinating—that’s who he is, that’s what he does. We were all too delighted to send it up.

Have you ever faced a choice like the one Julie faces, where her personal beliefs bump up against her professional aspirations?

To some extent, but nothing on that side of the scale. There are certain things I wouldn’t do. I don’t have a lot of convictions, but I have a couple. I wouldn’t do anything that advocated cruelty to animals or disrespect to the environment.

There’s a joke in the new season that makes reference to Nocturnal Animals. Watching it with a friend, we both laughed at it, though he hadn’t seen the movie. With these hyper-specific pop culture references, do you deliberately choose something that could work independently of the knowledge of where they came from?

Totally, we’re conscientious of “Could this work even if you don’t get the reference?” The material should be universal, even broad at times. Especially for something as obscure as Nocturnal Animals, I don’t even know how many people saw that movie.

I barely saw it, and I saw it. But with something like that, the fact is that naked men on trampolines holding sparklers are super-funny anyway. And then there’s the idea that this is the profound personal truth of the Matthew character’s id, which is equally absurd.

The show speaks frankly about mood disorders and medication, around, which there’s still a sort of stigma around. Was this an instance of “write what you know,” or did you intend it to be more pointedly political?

I’m fortunate enough to have a show where the main characters are unhappy, and despite the fact that’s they’re not terribly self-aware, they are aware of being unhappy. On the show, I try to move through that stigma because I worry that saying that someone’s an unhappy person still sounds like an insult. I think, What if it’s not? What if we’re proud of that fact, and we own it: "Yeah, I know I’m miserable." What then? I’m happy to be a part of this conversation, and not hiding in the shadows or anything. I’m lucky to have the structure to discuss it on the show the way we do.

What’s your relationship with Hulu like? On a new episode, you joke about Larry Wilmore’s show getting canceled because of dismal ratings. Is there any similar pressure on you?

It’s always on my mind. I have my dream job. I’m constantly hoping to get another season while, at the same time, being exhausted from the season I’m finishing or in the middle of. But I don’t know about the ratings. Hulu doesn’t share ratings with me, which I love. It’s like not having to step on the scale. You know when you’re fat! You don’t need the numbers.

Lastly, what have you’ve been watching lately?

I love Insecure; I love Issa Rae, she’s a genius. I’ve been following her since she was doing the YouTube show, Awkward Black Girl. Completely brilliant. I’ve been watching Botched. I confessed to Billy that I’ve never seen an episode of The Wire, but I’ve never missed an episode of Botched. I am rewatching Arrested Development, their new season’s coming soon. My favorite new-ish show is Baskets, I love that; so original. Oh, and I’ve been watching The President Show, my friend Anthony Atamanuik plays President Trump. Actually, I don’t like saying those words. He plays Number Forty-five. Print it that way.