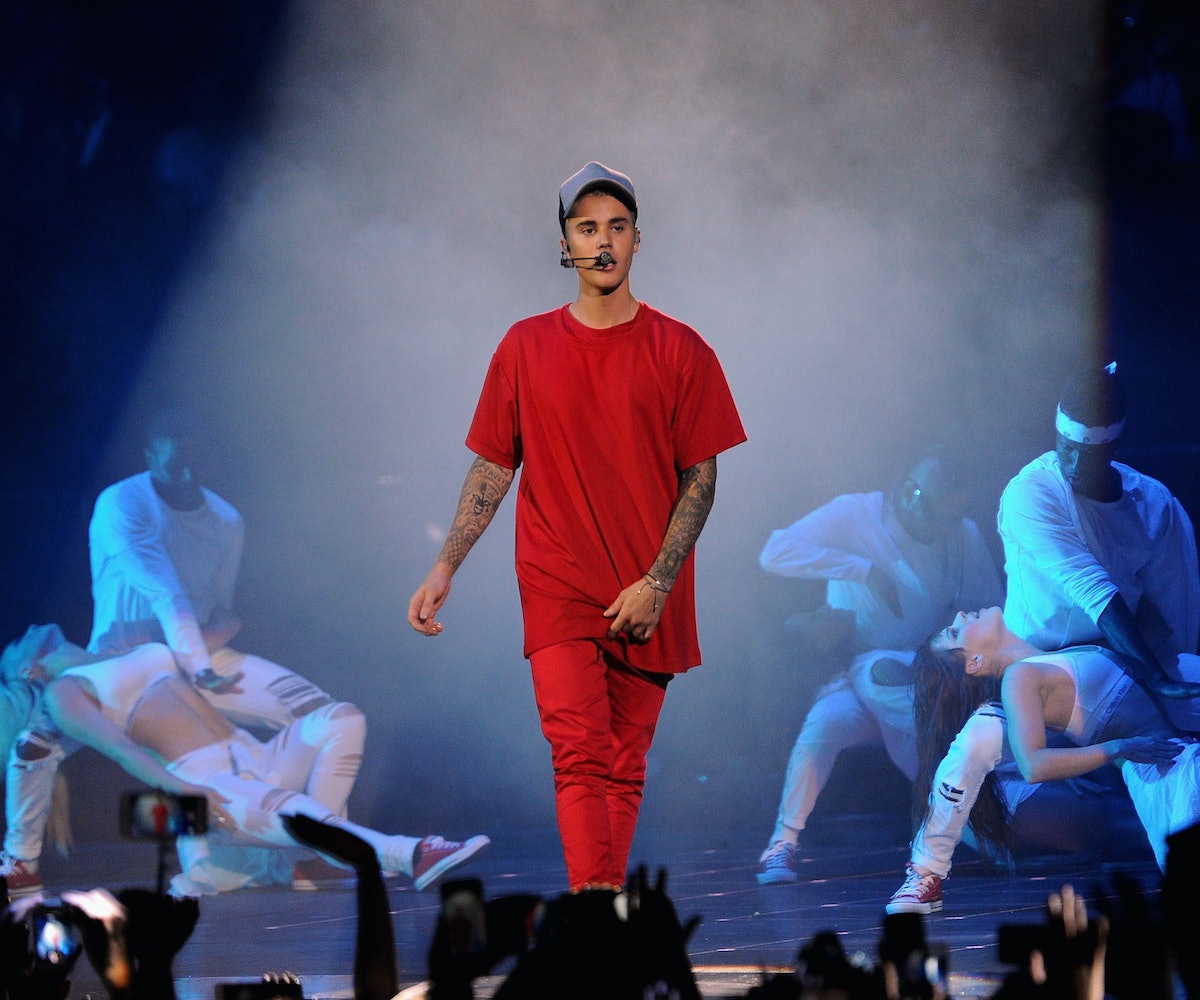 On January 23, 2014, following a DUI arrest in Miami, Justin Bieber's public image was battered and bruised, and his music career was flat-lining. Then, to add insult to injury, Seth Rogen dropped a 10-character bomb on the Biebs when he tweeted, "All jokes aside, Justin Bieber is a piece of shit." It was retweeted over 40,000 times in less than an hour, and summed up how everyone beyond his core fanbase of Beliebers viewed the teen superstar. He was an entitled brat who was more reality star than pop star, a punch line whose art form became secondary to his antics.

But earlier this week on The Ellen DeGeneres Show, Rogen was the guest during the show's "Justin Bieber Week," which meant that he and Bieber were in the same building. DeGeneres brought up the "beef" that began with Rogen's tweet, which led him to offer up an apology of sorts. "It's not really a beef, I just called him some really mean things on social media for no real reason," Rogen said. "And I'd only met him very briefly...it was really just something I can’t tell you why I did it." Later during that segment, Rogen and Bieber hugged it out on camera, and the Internet—including us—unanimously declared the beef squashed.

Rogen wasn't the only one with amnesia when it came to Bieber. Over the last couple of months, we have all been witness to one of the most impressive comebacks in recent pop-culture memory, and the Justin Bieber who egged his neighbor's house and peed in buckets was becoming a fading TMZ headline. But it wasn't a desperate apology video or a Comedy Central Roast that got us back on his good side (although the latter certainly helped). It was something simpler (in theory, not execution) and essentially unimpeachable. He started releasing dope music.

It all began with the stealth release of "Where Are Ü Now," a narcotic EDM-pop mash-up that appeared with little fanfare on the debut album of the Diplo and Skrillex team-up, Jack Ü. Its impact was anything but immediate. The album, Skrillex and Diplo Present Jack Ü, was released on February 27 of this year, and despite Bieber easily being the biggest guest star on a record that featured mostly underground artists, the song's rise to the top of the charts was a slow burn. It didn't impact mainstream radio until late April, but by then, realizing the song's crossover potential, Justin Bieber had already performed it live at an Ariana Grande concert. On July 9, the song peaked at number eight on the Billboard Hot 100, giving Diplo and Skrillex the biggest hit of their careers, and Bieber his highest-charting single since "Beauty and a Beat" all the way back in 2012. The song was such a phenomenon that the New York Times of all places deconstructed its creation with a widely circulated article and video called "The Inside History of Where Are Ü Now."

The behind-the-scenes story revealed that, contrary to what most people assumed, Bieber was not just a hired vocal on the track. It's true that what made the song so unique was its futuristic, multi-dimensional production, but the melody and the hook were written all by Bieber. It reminded everyone that the kid who was discovered, thanks to some virtuoso YouTube performances before he hit puberty, actually had legit musical chops. But still, one song isn't enough to cover up the stench of rotten eggs on his neighbor's roof, especially since it's "Where Are Ü Now" with Justin Bieber. To reclaim his crown as the prince of pop, Bieber needed to release music where the marquee belonged to him and him alone.

There is no greater test for a pop artist than releasing a "comeback" single after a long hiatus. (See Adele and Grimes as recent examples of two artists who both nailed it.) When Bieber—with the help of celebrities like Hailee Steinfeld and Kylie Jenner—began teasing a new song on Instagram, it signaled that his moment of truth was near. On August 28, Justin Bieber dropped "What Do You Mean?" in the form of a slickly produced skateboard video that had nothing to do with the song's lyrical content, and everything to do with its carefree exuberance. We wrote about the song with careful optimism, calling it "very catchy," and noting that "this new sound suits this new phase in his musical evolution." What we meant to write was that it is a straight-up jam.

As "What Do You Mean?" swiftly rose up the charts, the tectonic shift in this new phase in Bieber's career came at the VMAs, where he gave the first live performance of his hit single that famously ended with him in tears. Were they real, or just a ruse to convince us once and for all that deposition-era Justin Bieber was dead? It didn't really matter, because "What Do You Mean?" was a jam.

Bieber followed up "What Do You Mean?"—which debuted at number one on the Billboard Hot 100, by the way—with another of-the-moment banger, the Skrillex-produced dancehall redux "Sorry." It came out while he was still basking in the glow of his previous single, and a full three weeks before his new album Purpose would drop (today!). The song's stadium-sized hook and dance-floor bona fides were undeniable, and could be heard blaring from bars and house parties in hipster enclaves across the country. Jamming out to Justin Bieber songs was no longer something you did in the privacy of your bedroom—with headphones on—and his presence on your playlist was no longer something to be ashamed of. Digging Justin Bieber became cool.

With these individual successes—his third single "I'll Show You" was also warmly received—Bieber's new album has less riding on it than it did a few months ago. That's a good thing, since the first reviews of Purpose have been lukewarm to pretty good. And that's okay, because the album has already served its, er, purpose. Not only is it less of a big deal when Justin Bieber shows flashes of his old, dickish self by storming off stage, but as an artist, his appeal now transcends teenyboppers. His bubblegum has popped.