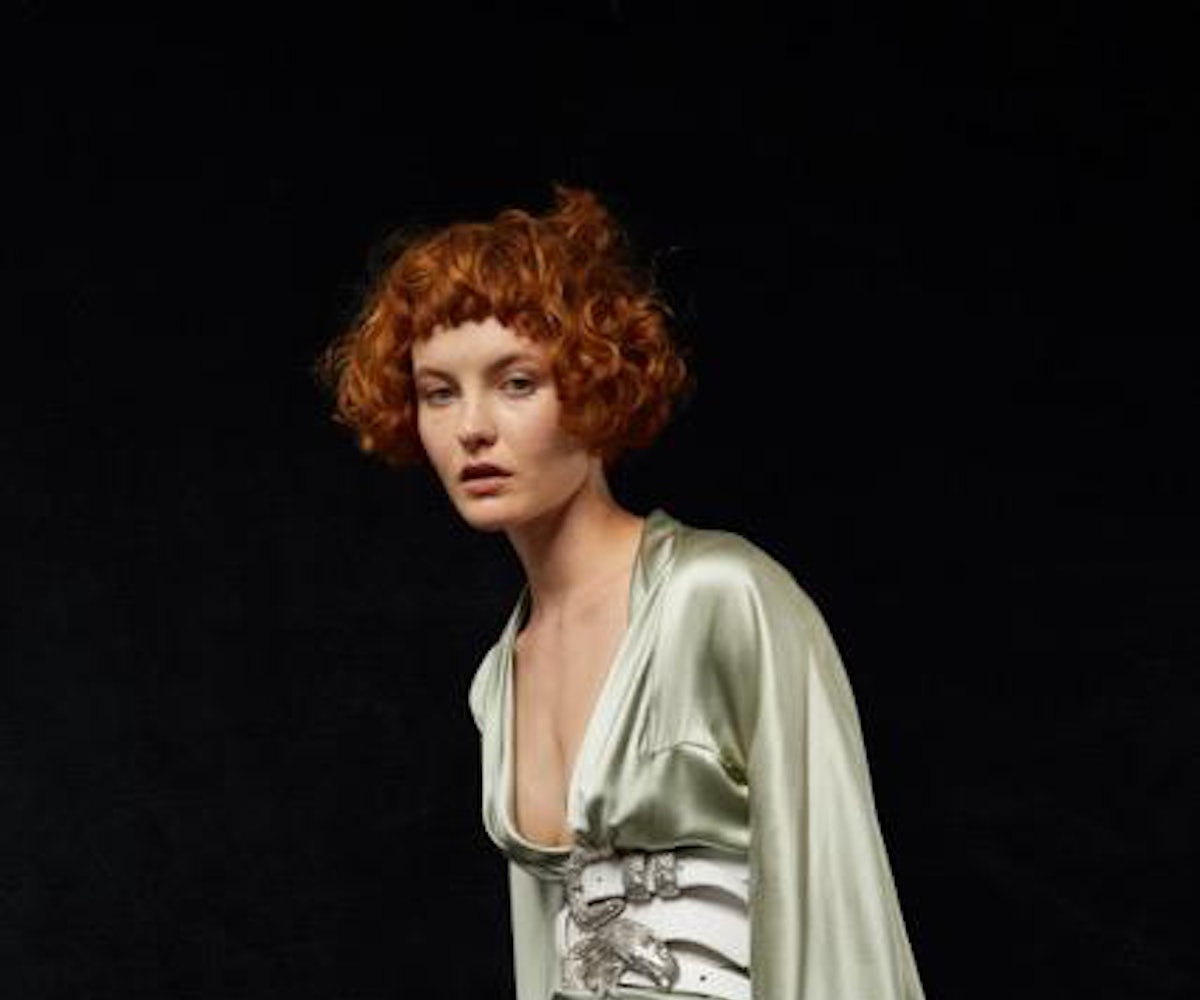 If you were to Google images of Kacy Hill in 2013, the search results would look a lot different than the images you'd find of her today (less clothing, longer hair...). Time can be a real trip, and Hill is here to tell you firsthand just how quickly life can shift in the span of a couple of years.

Hailing from Phoenix, Arizona, Hill moved to Los Angeles after deciding to take a year off before college. While there, she started modeling for American Apparel, which snowballed into being recruited by Vanessa Beecroft to audition for a model-dancer role on Kanye West’s Yeezus Tour. Spoiler alert: She landed the gig, but ended up quitting after the first leg to pursue music. As fate would have it, ‘Ye then discovered Hill’s song “Experience,” loved it, and signed her to G.O.O.D Music in 2015.

Hill isn’t exactly the kind of artist West is known to endorse. While he’s collaborated with artists from a variety of genres (think: James Blake, Bon Iver, Sampha, and Rihanna), when it comes to artists he allows on his label, they almost always fall into the hip-hop category (although it’s rumored Francis and the Lights has just been signed). It’s hard to fit Hill’s music into one specific genre, but hip-hop it is not; futuristic pop is probably more appropriate. But if West is good for anything (and he’s good for a lot), it’s his ability to sniff out talent.

For the past two years, Hill’s been known in most spaces as West’s protégé. She doesn’t seem to have a problem with the label, but, with her debut album Like a Woman, it’s clear she’s ready to step out from under her teacher's wing. It’s an impressive project for what’s going to be most people’s first introduction to the young singer. It’s sensual, highly feminine, intimate, and, as the description reads, toes the line “between titillation and tenderness, playing with the boundaries of what it means to be a sexually awakened woman in 2017." It's the kind of album you make knowing people are looking and waiting. And since two years have passed since Hill’s EP Bloo, yes, people have definitely been looking and waiting.

See what Hill has to say about her journey thus far and her final product, ahead.

This is your debut album. Can you tell me about the title, Like a Woman; where did it come from?

This album was written over a three-year period—it was finished over a three-year period—and a lot of it is about being alone and finding comfort in being alone and discovering things about myself separate from relationships or even family, friends, that kind of thing. A big part of my narrative in this album became about finding my own comfort zone sexually and what femininity meant to me. It’s just very much about what it means to me to be a woman.

Is there something that makes you feel most like a woman?

I think it’s just about being multifaceted and not trying to boil everything down to one thing. It’s not about being the cute one or the sexy one or about "this is the one thing that makes me feel alive or good or feminine." It’s just about the culmination of everything, and being a lot of different things.

You came out with Bloo in 2015, is your process different from making an EP to making an album?

I think the writing process is the same, but finishing production and everything was a lot more intense on this album just because it’s about making the entire thing cohesive and creating something that has a start and a finish. That also ties in with visuals. We were very conscious to make a really meaningful visual campaign and tie in everything through the music and make sure it all related back to the music and looked the way it sounded.

Your music falls into a lot of genres. I saw that you came to pop music’s defense on Twitter. Do you consider yourself a pop artist then?

I don’t know. It’s not really pop, but I guess there are aspects of pop in the songwriting, like in the structure. I think that pop is also a really interesting term right now because it’s kind of constantly evolving. I guess I would put it in there just because I don’t know what else it would be.

You grew up in Phoenix. Has the music scene there impacted or influenced you? Is there a Phoenix music scene?

There is a Phoenix music scene. I grew up playing the oboe and saxophone and sang in choir, but I wasn’t involved in [the music scene] as far as being in a band or anything, but I was always really into seeing shows as a kid. There were always a few venues like the Rhythm Room and Crescent Ballroom that that were just safe spaces. Maybe I was inspired by seeing live music more than anything.

In an interview last year, you talked about not wanting to endanger your potential by talking out about women’s rights. I did notice you attended the Women’s March. Is that idea of not mixing politics and your career something you’re wary of?

It’s not about not speaking out, it’s not about not mixing politics with my career that are endangering, it’s about how much do you get involved in certain things. I’ll always speak about things that I’m passionate about. I think the music itself has a very strong message, so I don’t want to crowd it with so many purposes. It’s more so about finding a focus and finding out what I can impact right now and how much it relates to my music and just building a platform before I go wild on Twitter. I think there’s also something really problematic about the faux-activist-super-tweeter that I don’t want to be.

Do you think artists have a responsibility to voice their opinions regarding politics because they do have a platform?

Yeah, I mean, a responsibility if they feel passionate about something. I don’t think they have to force themselves to speak out about something that they don’t know enough about because they feel obligated to because everyone is tweeting about it. I think that creates chaos. It’s completely unnecessary. If it’s something they feel passionate about and are educated about or have experience in, I think that’s in some ways... I don’t even know if responsibility is the right word. I think it’s more of a privilege to be able to have that platform.

Kanye West acts as a mentor to you. Is there a best piece of advice he’s given you?

I feel like I see Kanye West every day and I’m like, "What should I do today?" I’ve had one meeting with him about my music and that was kind of the all-seeing, let-me-change-directions meeting and he talked a lot about sentiment and the purpose behind the music coming out and what your intention is. He just helped me focus a lot on the sentiment and the music that I was making and what I want people to get out of it.

Were you listening to anything specific while you were making the record? Is there any music out right now that you’re excited about?

When I was making it, I was kind of listening to everything because I was really conscious not to try and emulate one specific thing. Now, I’ve been really into just songwriting. I really love Christine and The Queens, and I was such a fan of the Harry Styles album. It’s so good. And I love country music. I’m just really attracted to songwriting, so I really like Chris Stapleton and Maren Morris and Kacey Musgraves, that kind of stuff. So it’s kind of all over the board. Whatever good songwriting I can find, I kind of attach myself to that.

Do you have a favorite place to write your songs?

I kind of go in the studio with the producer and start with some chords and some sounds and find the melody that I attach myself to. I always keep words and phrases that inspire me, so I go back to those and build a song around that.

You’re still very much in the beginning stages of your career. What’s the most important lesson you’ve learned so far?

Definitely just patience. It’s a really difficult thing to learn, and it’s a necessary thing. I think when I first got signed, I was like, "Alright. Time to put out an album." Then I was like, "Oh, okay. So that’s not how that happens." So I had to do all of these things first. So, yeah, patience is a big one.

Now that you’re done with your album, are you working on any other projects?