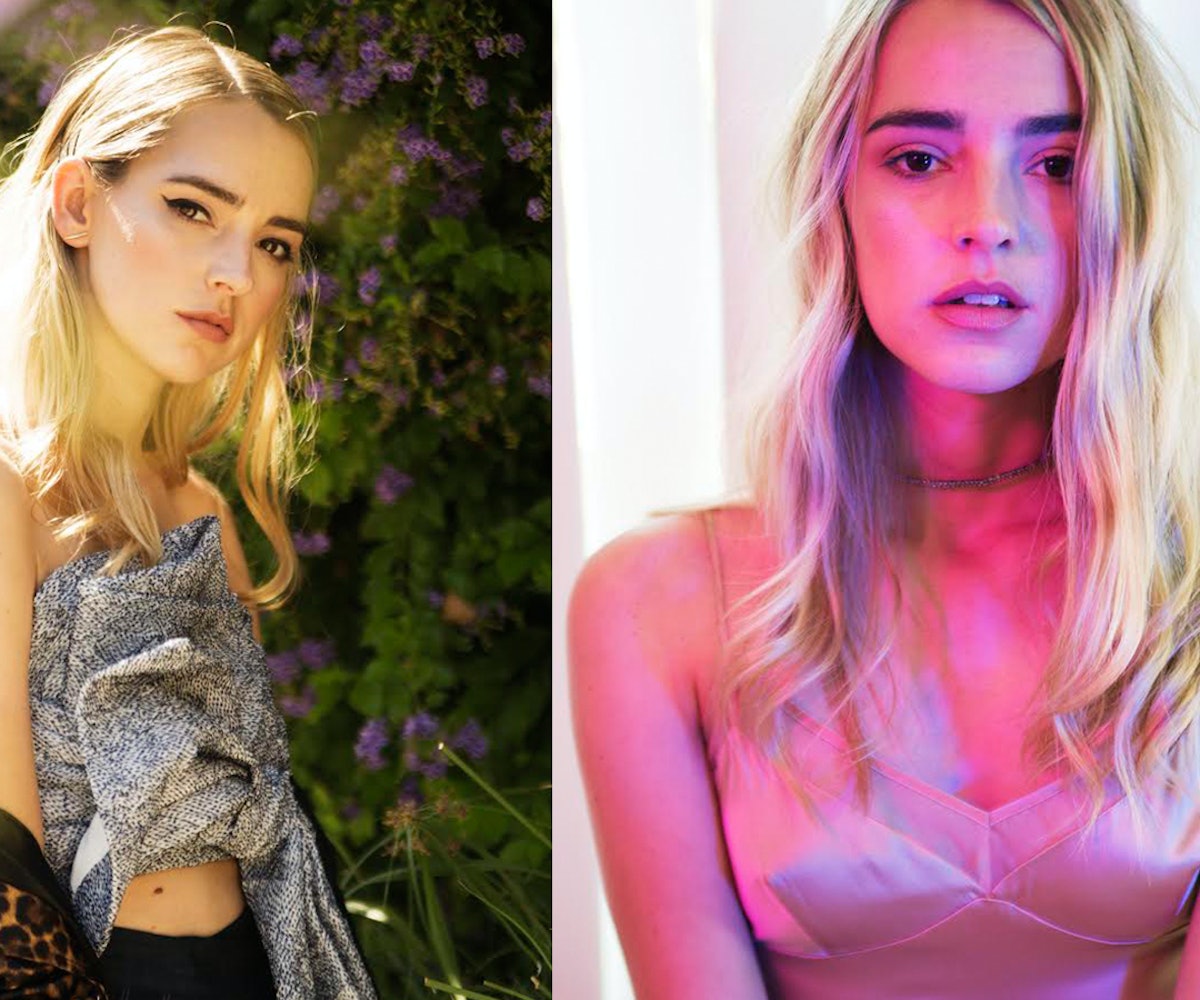 With Nickelodeon bona fides (she starred on Big Time Rush), a beguiling voice, and undeniable charisma, Katelyn Tarver could’ve easily pursued the usual pop star path, churning out crowd pleasing yet paper thin tunes that only exist to take up space until the next one is ready to take its spot on the charts. Instead, she’s spent the past several years honing her craft as a songwriter and releasing music at a tantalizing pace, starting with 2015’s “Weekend Millionaires,” a Bling Ring-ian reflection on what it means to constantly chase that Friday night high. Her new EP, Tired Eyes, is available for pre-order, and it’s full of infectious, relatable music that peels back the curtain on thoughts and feelings that are usually glossed over on radio records.

We chatted with Tarver about her upcoming EP, writing song that capture those in-between emotions, and the brand new music video for her single “Hate to Tell You,” which might be the best ’80s homage this side of Stranger Things.

It hit me that you haven’t released a record or an EP in a while.

It’s been a while, and there are multiple reasons for that. There’s like the boring business side that’s like contracts and legal things holding you back, but I think it also took a while for me to find the songs that I felt were good enough. It’s been a long time coming and I’ve been frustrated at certain points along the way but I’m really happy with where we’re at and where the EP is at.

How much did you record and write for the EP?

It’s gone through so many different stages. When I started writing for this it was originally an album. There’s probably 50 and counting songs that I’ve written, and probably more half songs. Being in L.A. and being a songwriter I’m kind of always trying to connect with people and see what happens. Sometimes you get something sometimes you don’t. I went into a session to write for my album and ended up writing a song that Cheryl Cole cut [“Crazy Stupid Love”] and released in the U.K. as her first single and it went No. 1 over there which was a very nice surprise.

Why title the EP Tired Eyes?

“Tired Eyes” was the title of another song I’d written with this project in mind… I was listening to it and I was like ‘I wonder if I should just take this title’ because I felt like, as the EP was coming together and as we were putting the songs together, that seemed to fit. It kind of all had a little bit of a cynical theme. “Weekend Millionaires” is kind of making fun of L.A. culture, and “Hate to Tell You” is kind of an eye-roll song, and “What Do We Know Now” is about getting older and feeling like you don’t know anything. It sums up the theme of this EP and where I feel like I’ve been at the past couple years—not in a terrible way—but as you get older just looking at the world, you just tend to get a little more cynical.

You’ve been acting, making music and generally in entertainment for a while. How has that impacted the music you’ve made? Does it fit with the theme of the EP?

I’ve been coming up on eight years in L.A. this month, and I feel like when I hit seven years it was this jolt of whoah. I moved out here from a small town in Georgia—kind of your typical story—with these big dreams and an idea of what my life was going to look like and what my music was going to do and the acting roles I was going to get, and you quickly realize that it doesn’t always go how you envision. I think it ends up being better, but you definitely have your low points of being frustrated and asking yourself the question of ‘Did I make the right choice?’

“Weekend Millionaires” was the first thing you put out in this iteration of you making music? Was it nerve-wracking for you to make that conscious pivot of who you are and the music you want to make?

Yeah. Yeah, no, it was terrifying [laughs]. Anytime you release something new, there’s that fear over how it’s going to be perceived, especially a song that has a statement like “Weekend Millionaires.” I was hoping it’d come across in the right way… I felt like it was a good example of the direction I wanted to go, with my music, just being more lyrically driven and playful and poking fun, just being more real.

What was the process like to find the sound that worked for you for this record?

I had to keep coming back to the goal of wanting to have a message to the song, whether it was sarcastic or meaningful… just trying to take the more nuanced feelings and express them. A lot of times that keeps me from writing because it’s kind of daunting to take on that challenge. It’s hard to express a nuanced message and those in-between moments or something that’s making fun of something or yourself. It was just writing a lot and pushing myself to go further.

I think we sometimes have a simplistic way of looking at pop music, it’s either a happy song or a song for going out or a sad song and we don’t always pay attention to songs capturing those in-between emotions.

Totally, and I had to kind of stick my neck out in sessions because there is a tendency to want to wrap something up really nicely. If you’re writing a song about feeling frustrated you kind of want the chorus to go into, ‘But everything is gonna be okay and keep your head up,’ which is not bad—I love empowering songs—but a lot of times it kind of takes away the power of a song that exists in that tension. I have a song called “You Don’t Know” on the EP that’s about that tension of being frustrated and feeling misunderstood and kind of just wanting to sit in that feeling for a while and not have people tell you to feel better or give you good advice.

What does pop music mean to you?

My knee-jerk reaction to pop music is Top 40, like what you hear on the radio, but I think it’s cool when songs that can be classified as pop in a broader sense but don’t necessarily fit the mould become more popular, like when Lorde came out. That was awesome. It was something to listen to that was unique and different and not at all what you hear, same with Ed Sheeran… I think it’s just about having lyrics or a message or a sound that people connect with.

There’s a real synthy ‘80s influence to the record, could you tell me how that came to be key to the record? What inspired you in terms of other music?

I feel like the most ‘80s synth song is “Hate to Tell You” and I love it. I worked on the song with Burns and we just kind of started the track from scratch that day and came up with that idea and went for it. I didn’t walk into the EP saying I needed it to have an ‘80s influence, so I don’t have a bunch of ‘80s references on hand as far as what inspired those sounds. I think it was kind of song-by-song and being drawn to synths and electronic sounds to kind of counteract the singer-songwriter vibe of it. I want to experiment with the production because my influences for writing are singer-songwriters. I was and still am obsessed with Kacey Musgraves; obviously she’s country, but the way she writes and tells stories and is honest and strong and empowering and sarcastic. I really love that. And listening to lJon Bellion even; I’m a really longtime fan of John Mayer too.

I loved the “Hate to Tell You” video. Was it the kind of thing where you finished the song and just knew that was how you wanted the visual to look?

Not immediately. If I like the song while I’m writing, a visual definitely comes to mind of how I can see myself performing it. When it came time to do a video, I thought it would be cool to do that ‘80s influence and we lucked out and got this venue that’s kind of an ‘80s karaoke bar, and I knew it would just be fun to have a video where I get to dance around and sing to the camera. I didn’t have an immediate clear vision, but as it was coming together it was definitely what I had in mind that the video should be.

You have a network of fans [from Big Time Rush] that goes back pretty far, like seven or eight years. What is their reaction to the music you’re making now?

At the end of the day it’s so nice for anyone to respond to a tweet or an Instagram or a post on Facebook with any kind of compliment or encouragement of like, ‘Oh I loved you in Big Time Rush… and your EP seems cool!’ I’ll take that any day.

Watch the video for “Hate to Tell You,” below.