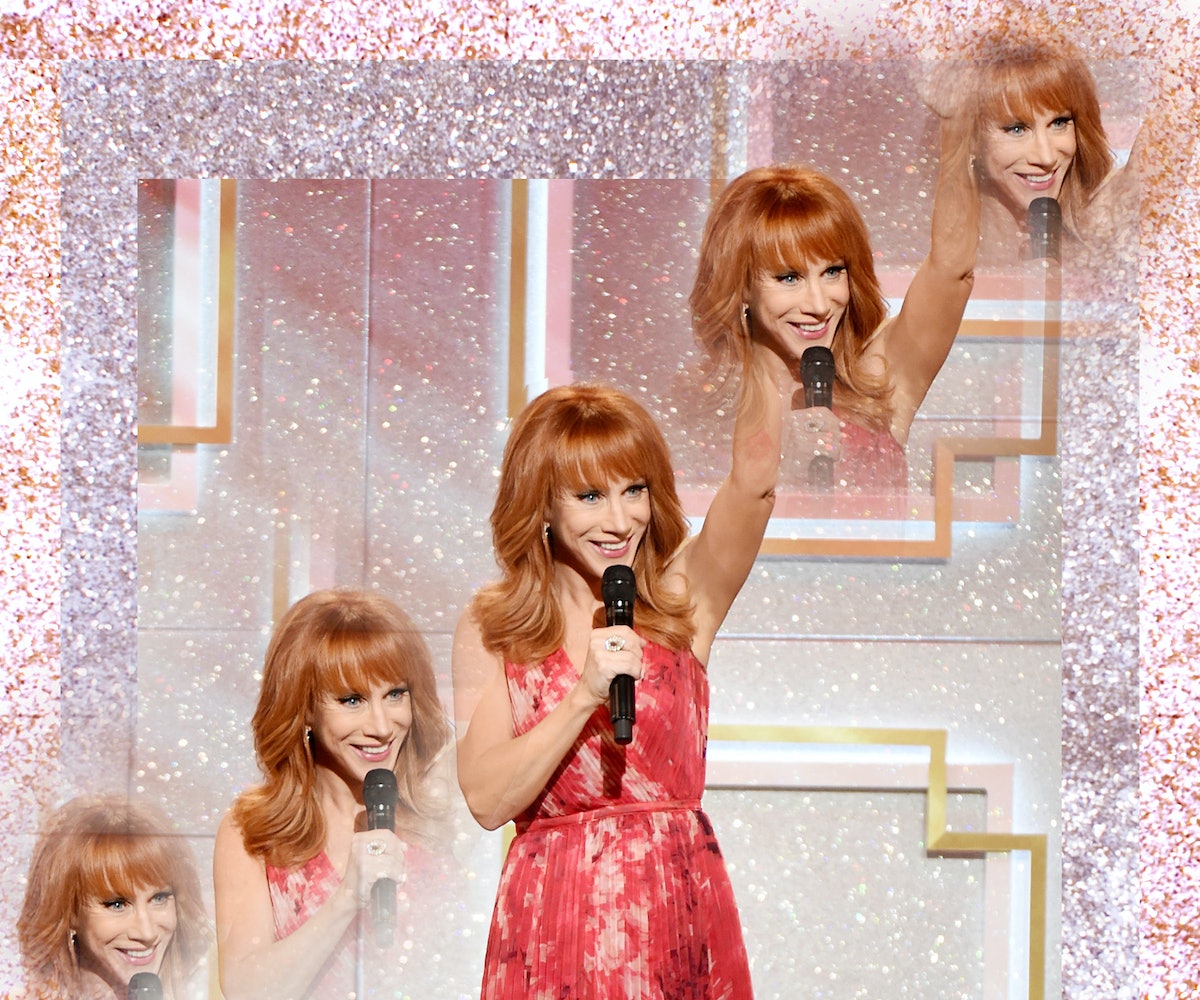 Update: Kathy Griffin recently announced that she will be leaving Fashion Police. This interview was conducted before her seven-episode run on the E! red carpet commentary show.

Kathy Griffin isn't just a fiery, fierce comedian, she is also the newest face on the acidic (and addictive) Fashion Police on E!. The show has been known to ruffled quite a few feathers, especially with the no-holds-barred approach it takes to celebrity style, going after stars for sartorial missteps. Yet, to Griffin, she uses the spotlight to stay grounded and remind herself, this is just a big old game of dress up. After all, how else would the self-proclaimed D-List comedian transition to a fashion critic? Because, remember, the last person to take Kathy Griffin seriously is Kathy Griffin.

What’s the worst thing about the red carpet, like at last week’s Golden Globes?

When these celebrities come up with their freakin’ plus ones and the kids, I don’t give a shit. I wanna see the celebrities, see what they’re wearing and hear them lie about how it’s all a family when they do their films together and all that bs. I will say this year had a lot of really good plus ones, if you unnoticed Emma Stone’s super crazy brother with an afro and a headband dressed in a blue suit from Sears. He was kind of walking around aimlessly like hey, is there a camera here? So as a comedian, I’m always looking for those moments on the red carpet as well as the nice dress.

What resonates with me is that I have been on the other side of the carpet. I have eight Emmy nominations and two wins and then you realize you get home and people are more concerned about your dress than whether or not you won. I have talked to the greats and the giants and I had a great conversation with Lily Tomlin the year she was nominated for Nashville. And she said the last thing any of us every thought about was what to wear. I think I purposefully wore something silly because I thought it would be kind of fun to show up at the Oscars as a nominee in an imperfect look.

It’s not like they’re all dying to walk the red carpet, it is a job.

It’s something they have to do whether they like it or not. But you’ll hear Meryl Streep say, 'I’m sick and tired of being an Academy nominee and all I read about is not my work in Sophie’s Choice, but oh, I picked the wrong Armani dress out of three Armani dresses they sent me.' By the way, she looked fabulous this year.

And you think regular people relate?

Do they really care about winning and losing? It usually seems so arbitrary.

My first Emmy nomination, I don’t know who these nominees are that lose that are happy, but I was livid. One time I actually cried like a baby in a limo, then of course I Instagrammed it and put it on twitter as well. But don’t get it twisted. These celebrities actually do care what they look like and whether or not they win or lose. And trust me the dress part stings even more when you lose.

What about celebs who just don’t get it?

If everyone had a sense of humor, I would have no job. I love it when Demi Lovato is upset with me, or Gwyneth Paltrow avoids me. They see me and they avert their eyes and I just go for them. I went right up to Selena Gomez a couple of weeks ago. I said, 'Let’s take a picture.' This will be the least controversial picture you’ve taken all year. And she didn’t say anything. She didn’t laugh, she didn’t cry.

So it hurts to lose.

When you lose, you’re actually the only person that cares. I’m a girl from Forest Park, Illinois. So when I lost, and I lost the Grammy six years in a row before I finally won, I was the only one who felt bad. Any normal person would say wait a minute: You got be at a party and you’re in between Bruno Mars and Katy Perry. That’s really what I love about it.

What do you do when they turn on you?

When celebrities get upset with me, and I have had every kind of confrontation you can imagine, I have a strict no apology policy. I stand by it. I hear their grudge or their complaint and I just kind of smile, sometimes I say it’s my job, but I never say I’m sorry to a celebrity for a joke.

So you think it’s gotten just too ridiculous.

The whole idea that designers are worried that two giant superstars might wear a similar color, it’s all just ridiculous. And you need somebody to go, I get that it’s out of control. I’m not one of the ones saying this is very important. I’m just saying, this is the red carpet so everybody lighten up and have some fun, and that message is mostly to celebrities.