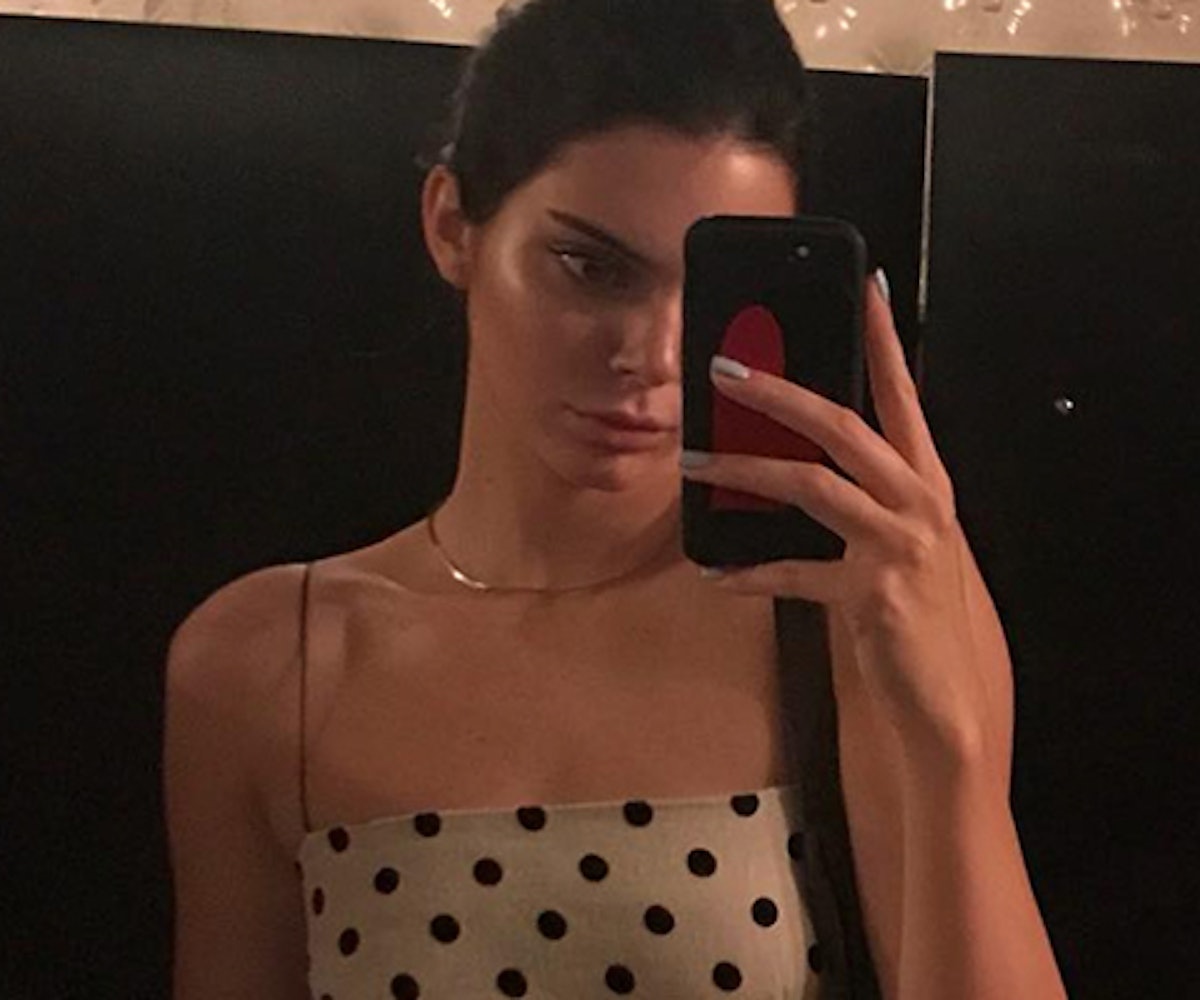 Every time an A-list actress or Victoria's Secret Angel takes a photo at a strange angle or eats a carbohydrate, tabloids begin to speculate whether or not they have a "baby bump." Over the holidays, this happened to Kendall Jenner after she posted a mirror selfie in a polka dot dress. In the image, she looks like a tall, thin model with an impossibly tiny waist, which she is. Somewhere in the photo, a handful of fans saw what they thought was a pregnant belly and started leaving comments discussing whether or not Jenner was with child.

Some media outlets jumped on those comments and thus began the news cycle: "Is Kendall Jenner Pregnant?" By giving validity to these commenters' speculations, the media is encouraging openly dissecting a woman's body. They're also implying that Jenner looks larger than average, which she most definitely does not.

In a Glamour survey from 2011, 97 percent of women who participated reported having some kind of body image issue. And, according to a 2008 survey by the University of North Carolina at Chapel Hill, about 65 percent of young American women had disordered eating behaviors, with 10 percent reporting symptoms of eating disorders like anorexia, bulimia, or bingeing. I personally don't know any woman who hasn't dealt with body image issues, an eating disorder, or both.

Women are constantly in a state of being critiqued, and the narrative "Is [insert very thin person here] pregnant?" is particularly damaging. Over Thanksgiving, Miley Cyrus was accused of being pregnant because she looked slightly-less-than-very-thin in one of her photos. She then had to explain it was just a "shit ton of tofurkey." Just like Jenner had to justify her body by saying, "I just like bagels ok!!!"

The fact that these women have to explain why they inhabit the bodies they inhabit and why they might not look flawless at every given moment on any given day is ridiculous, and demonstrates all that's wrong with our culture when it comes to women and body image. If you've ever had to listen to a friend explain why she's eating a second piece of bread at dinner ("I had a salad for lunch," "I went for a run earlier," etc., etc.), then you've seen the real-world effects of this kind of dialogue.

Jenner looks great. Cyrus looks great. Women with big and small stomachs all look great. We don't want a young woman to look at that photo of Jenner and hear people say she looks bigger than average. Then, that woman's new "body goal" will be someone even smaller than Jenner, who is already very, very small.

If we want the next generation of women to grow up with a much healthier image of themselves, we need to stop assuming anyone who looks a little bloated (or doesn't at all) is carrying a child. I mean, it's gotten to the point where even Rihanna has been criticized for her weight, and she's Rihanna for God's sake.