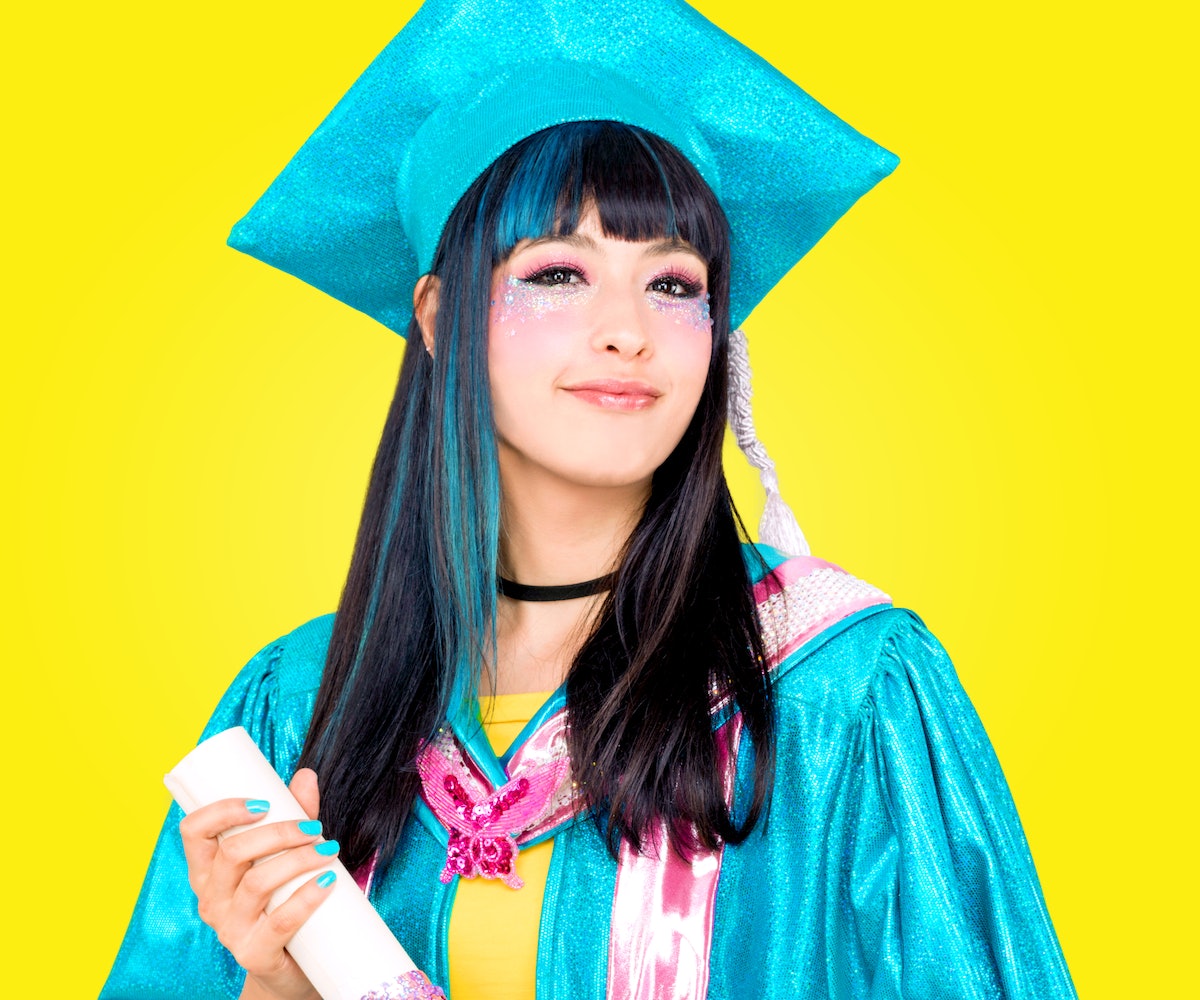 Ever since they emerged on the web in 2014, all eyes have been watching Kero Kero Bonito (KKB). The pop trio is a collaborative effort from Sarah Perry, Gus Lobban, and Jamie Bulled. Based in South London, KKB has made quite a splash around the world with their genre-defying tunes that sound like they bounced straight out of a video game.

The talented group of 20-somethings has been involved in music since their childhood—Perry was a saxophone player in a brass band at her middle school in Japan, while Bulled and Lobban played in a handful of bands together with their hometown friends. (Lobban has also been making tracks on his laptop since he was 12 years old.)

We spoke with the band before the release of their highly anticipated debut album, Bonito Generation. Get to know the whole gang in the interview, below.

I always listened to music in the car when my dad would put his CDs on when he's driving. I remember he put on

from The Beatles, and there was that song, "Octopus's Garden." I was listening to it as a kid in the kid's seat, I was imagining this actual octopus in a garden chilling out, and I was thinking,

This is such a cool song.

I think that's my earliest memory of music. That's actually my favorite song of The Beatles because of the octopus chilling in the garden.

with everyone and met the people.

He still plays those songs. For me, it was just what I heard growing up. I heard it in the womb, so that kind of music, it's not the most normal early-life soundtrack, but it is for me. The production, of course, came through the womb.

It's the same as Sarah, being in the car with family or my sisters. My sisters would get their first car and start jamming out in the garage or something.

I think with all these things, it's like, they are such early memories that we can't remember the first time they happened. They have just alwa

So I know that Jamie and Gus went to school together and I read that Sarah came along through an online forum?

Yeah, we wanted to work on a project with someone. Me and Jamie wanted to do something fresh, and we thought it would be great to have a singer. We put some ads out, and one of the ads was on this crazy bulletin board for Japanes

e experts in London, and we have a Jap

anese friend who was like, "You should post an advert. You never know... People don't even see stuff like that so it might be quite interesting." And yeah, sure enough, that's exactly what Sarah saw.

Yeah, I used to check the forum almost every day because sometimes there are some interesting ads looking for someone to take pictures.

It's sort of like rich Japanese people in London, right?

Yeah, well, students. All the Japanese experts would check that forum. I saw the ad, and I just thought I should give it a go and here we are.

How have your siblings reacted to KKB?

I would say ambivalently. I think one thing that is genuine is that when I'm mixing, my sister's bedroom is right next to mine, and I think that can get really annoying for her.

All my siblings have been pretty positive. I think it's because I'm related to them, I don't know. I don't know what they really think. I hope they like it.

About two weeks after Glastonbury, I went to this family party and my aunt was listening to me say how I've been on tour and stuff, and she went, "That sounds great, but talk to me when you've played Glastonbury." And I was like, "Oh damn, I've played that two weeks ago, but it's okay. Don't worry about that." [

When we played Glastonbury, my grandparents actually watched the whole thing when they air it on TV, and they were like, "We didn't see you! Where were you?" And I was like, "Not everything is on TV!" But that was sweet.

Did you guys always know that you wanted to be making pop music or did it just naturally happen that way?

We work on all kinds of stuff. There's stuff on the new record that's really interesting. There's nothing greater right now than an amazing pop song loved so dearly that you have to play it six times in a row. That's still one of the most amazing feelings you can have. When me and Jamie and Sarah met, we were like, "Yeah, we can do that."

Could you tell me a little bit about your debut album, Bonito Generation?

It's 12-songs long, and there's a new theme. We didn't make a full-on concept album, but there's a definite vibe that a lot of people are chatting a lot about our generation

. I'd estimate a good 50 percent of clickbait

might involve some kind of millennial. Actually, no one really knows what these people are thinking. It feels like our generation, in the U.K., it doesn't really feel right to be a part of the political debate. People don't really know. Is it actually so hard to get a job? What's going on? No one really knows, so we made an album from our viewpoint.

Are you guys into horoscopes or zodiac stuff?

A little bit. I'm aware. I know that me and Jamie are both Scorpios. It's weird, though, because you normally talk about horoscopes in terms of like, "This horoscope gets on well with this horoscope." I don't really know how it's meant to work with all people in one horoscope.

We'd done a show with Skylar Spence and James Deen, and we were all backstage, and everyone apart from Sarah was a Scorpio. It was this trippy moment. There were very spiritual people in the room, and they were going mad. I was going pretty mad. We were like, "What does this mean?" If we were all Scorpio, we would just be tearing each other apart.

What else do you guys do when you're not making music and recording?

I guess, painting. I paint a lot. I like drawing. I'm still doing creative stuff. I have an art studio in London and I love painting on a massive canvas.

Me and Gus sometimes do lasers at nightclubs. When we find an evening to do it, we'll just act on it.

I think my hobby outside KKB is I collect model trains. I've got a serious, not ridiculous, but quite a substantial collection. I'm mostly interested in modern trains.

One of the Russian promoters sent you a model train.

Yeah. We played this show in Moscow, and I got on well with the promoter. We were at a station, and I was looking around like, "Oh my god, this is just incredible." I was like, "Excuse me, I'm quite interested in this stuff." And he was like, "Oh, well then, you should know that this particular train was built in 1956." I was like, "Okay, I've been bested. Educate me." He sent me a little toy trolley, just because, in the post from Moscow. It turned up in this massive box.

I've always wanted to go to Russia, but I'm kind of intimidated.

Yeah, it's hard-core. There's not a lot of English there. I think the young, trendy people know because they'll listen to cool stuff, generally modern indie stuff. It's super interesting. I think it's the place I've had the biggest culture shock actually.

Yeah, in the U.K., you don't really hear much about Russia, but when we went there, young people were dancing to new music. It's not really much of a difference.

That was the thing. It was confusing, but also not that surprising at the same time. People will listen to trance music or FKA twigs. Even then, there are people that you just have the conversations with and they have a very funny sense of humor as well. In Moscow, where we hung out, they have this very sardonic sense of humor. They just have an interesting viewpoint. You walk around, and there are adverts for Russian military stuff and you're like, "Okay." But, shout-out to the Russian fans!

How did you come up with your band name?

It all started, I think, when I was looking at some onomatopoeia, and I thought it was super-weird that onomatopoeia differs between languages. You see this in French comic books where Asterix will exclaim, "Woahhhh" or something. In a British comic, it would just be like "wow" or "ouch." In a French comic it's always like "Wooowouch." It's like modes of uses. It's the same with animals, which is crazy. I was unaware that animals' sounds change. In Japan, the noise that frogs make is "kero kero," whereas here it's "croak" or "ribbit," neither of which have the slightest resemblance to "kero." So, kero kero just wrote itself. We thought all of this [made for a] really good name because you can't really tell where it's from. It just sounds good, and isn't that what it's all about? Pop music?