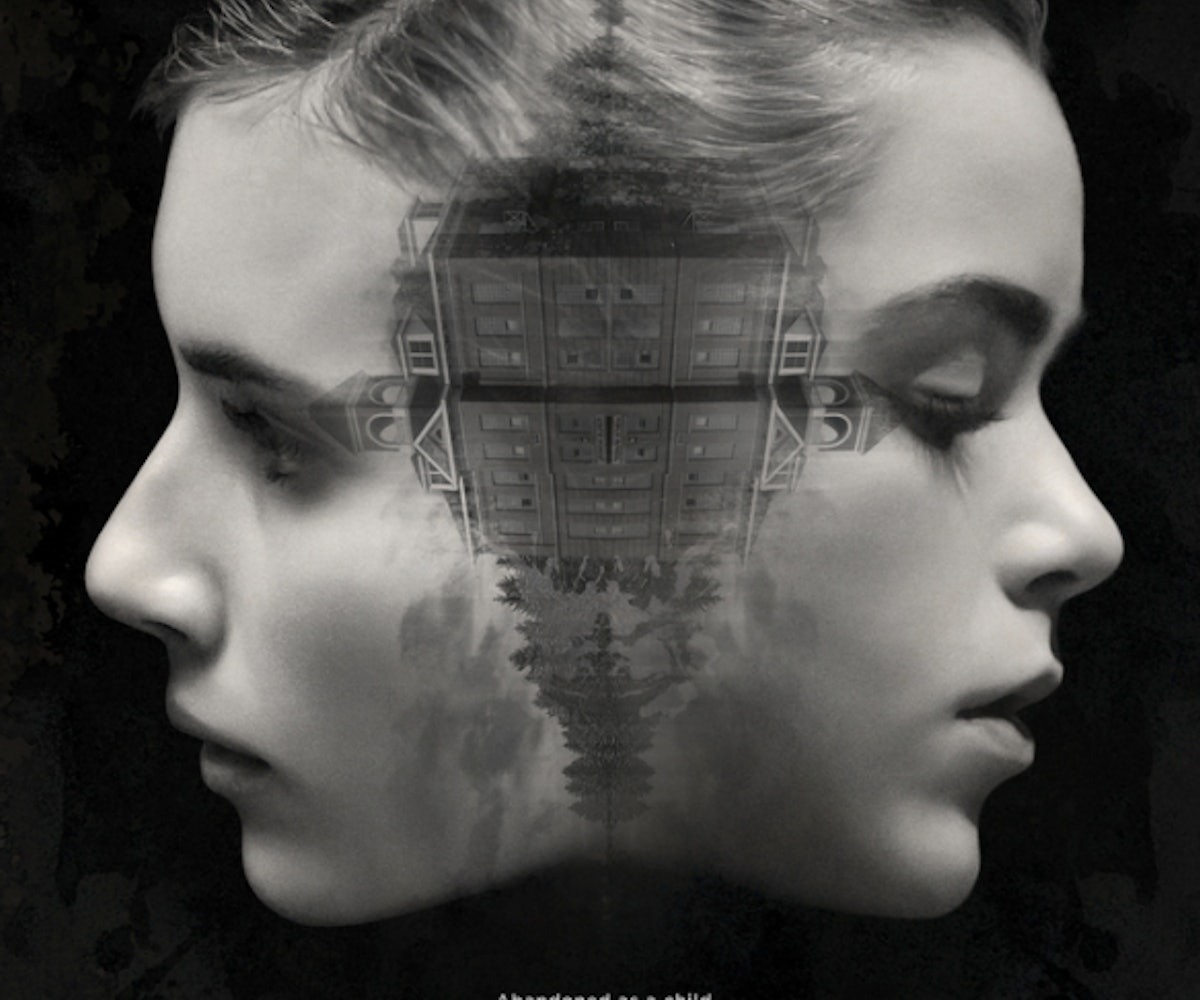 A promising child actor’s career can flame out in a hundred different ways: There’s overexposure or falling into obscurity, aging out of cuteness, losing interest in performing entirely, and, of course, excessive partying. Kiernan Shipka and Emma Roberts, the stars of Oz Perkins’ fearsomely assured new horror film The Blackcoat’s Daughter, both successfully skirted all these pitfalls as they’ve outgrown the roles that made them stars. In Roberts’ case, playing the queen of mean girls on American Horror Story and Scream Queens helped her transcend a Nickelodeon sitcom background. Shipka’s longtime gig on Mad Men made her TV’s most mature youngster, but now, her latest foray into film should eradicate any memory of Sally Draper.

For Perkins’ debut film (kinda—his follow-up I Am the Pretty Thing That Lives in the House actually got a release last fall, while The Blackcoat’s Daughter gathered two years of dust on distributor A24’s shelf), Shipka plays a disturbed and disturbing young woman named Kat. A misunderstanding leaves her and a classmate (Lucy Boynton) alone at their austere New England girls’ school for the duration of their winter break, which is when Kat starts to come down with a case of the crazies. Elsewhere, Roberts thumbs a ride with a pair of menacing strangers on her way to the very same school. By the time their two stories dovetail and Perkins clarifies the link between them, the audience is already trapped in a nightmare orchestrated with freakishly precise control. Though their independent strands of plot kept them working separately during production, Shipka and Roberts came together in New York to chat with us about their favorite scary movies, the BS that young actresses face during interviews, and the post-modern techno perils of using Facebook Live.

Do you believe in any aspect of the supernatural?

Emma Roberts: I definitely do, having spent a lot of time in New Orleans. You feel some energies down there that you don’t feel anywhere else. During AHS: Coven, we shot in abandoned hospitals and 100-year-old buildings that had gone through so many transformations. We’d take pictures in there, and there would be these orbs everywhere. I believe in psychics and all that.

Kiernan Shipka: I have never personally had any experiences with the supernatural, but I do believe in it; there are too many ghost stories for them to all be fake. I want to spend a night at the Chateau Marmont to see a ghost; I hear everyone sees a ghost there.

ER: My mom said she saw a ghost there. I stayed there for, like, a month, and I couldn’t be in my room alone. A couple times I’d just feel something else in the room there, and I had to go read downstairs in the lobby because I got too scared.

Emma’s worked in horror before, but The Blackcoat’s Daughter is still new territory for both of you. Did this present an acting challenge?

KS: There are qualities about my character Kat that make people uneasy. She has a sense that she’s not alone with herself, and I had to transition into that feeling. The challenge was that we shot everything out of order, so it was a matter of figuring out what part of her arc she was in at any given moment.

Your characters sort of move down parallel tracks and don’t interact much. So during production, how much exposure did you have to one another?

ER: We shot at different times. I mean, I didn’t even meet Lucy Boynton until the premiere. Kiernan and I didn’t work together, so we just met up in passing. But when I read the script and decided to attach myself, I was like, “Kiernan Shipka has to play Kat.” And I brought that to Oz, who said, “Okay! What gave you that idea?” and I told him it was more like a feeling, like, “I’ve seen her on Mad Men, and I know how old she really is. I’ve talked to her, she’s so mature. It’d be so good to see her introduced to this weird world.”

What do you think it is that draws people to horror movies?

KS: I think for this type of horror film—as well as some of my favorite horror films, like Rosemary’s Baby and The Shining—they’re art pieces, you know? They’re gorgeous, regardless of the genre, but then when you add the horror elements, it gets bigger. It entertains.

ER: Horror is a genre where you can include your friends. It’s a group activity. You go out to see a romantic movie with your partner, or you go to a comedy to laugh with a couple girlfriends. Horror is a communal thing. When I go to horror movies, it’s with 10 friends. We have to buy tickets way in advance just to make sure we can all get seats together; we’ll take up the whole row. There’s something so inclusive about horror movies.

KS: I don’t know if Let the Right One In is a horror film. It’s the genre-halfsies kind of film that’s my favorite, kind of romance and kind of horror.

ER: One of my favorites is The Others, with Nicole Kidman. I loved the twist at the end; I really like when you’re watching a horror movie and you’re thinking one thing, but then realize it was completely wrong or just a dream or something. I love when things are flipped on their head like that. Oh, and I loved What Lies Beneath, I watched that all the time with my mom. As of late, one of the best horror movies I’ve ever seen is It Follows. When I would be home alone, I’d shut all the doors, thinking that whatever that creature was would be coming for me.

Now that Kiernan’s on Feud, you’ve got two common directors with Ryan Murphy and Oz Perkins. How do their methods differ?

KS: The gap between movies and TV is the biggest difference. This was such a small cast, Emma did all her work pretty much alone, my scenes were just me and Lucy. It was a much more intimate, quiet experience, and the town we were staying in was not that populated, so you’re seeing everyone every second of every day. Full immersion. With Ryan, you’re in the middle of this giant spectacle machine that never stops pumping out amazing material. Different, but awesome both ways.

After you both saw the movie, did you debrief or compare notes at all?

ER: I don’t think I’ve seen you since I watched the movie. When I saw the movie, one of the things I was impressed by was how seamlessly our two stories were interwoven, how there’s continuity between all of us without having talked about it, and I think that’s rare. That’s a testament to Oz.

KS: It helped when we were filming because Emma shot all her stuff before me and Lucy. There was a taste of one side of the film, so Oz knew everything he had to know, and he was able to guide me toward that.

After someone sees The Blackcoat’s Daughter and knows the twist ending, what’s going to bring them back for a repeat viewing?

ER: When I read Shutter Island and made it to the last page, I literally turned back to the first page and started reading it again. I thought, “Well, now I know what’s really going on.” I actually enjoyed it more than the first time, when I had been speed-reading because I was just excited to find everything out. Same with horror movies—when you know where the scares or twists are, you can look for the nuances.

I feel like younger female actresses are subjected to a lot of nonsense in interviews. What’s the question you two hate getting asked most?

KS: Every question you’ve asked so far? This has all been so sexist. [Laughs] No, I think the most annoying thing is pitting women against other women, that’s prevalent. Things have changed for the better since Feud took place, but, especially on social media, the comparing and viciousness have been exacerbated, too.

KS: I went Instagram Live last night for the first time with my two friends. We were just talking and being silly. It’s so fun, have you gone live?

ER: No, but I will troll other people’s live feeds. Troll’s the wrong word. I mean, I’ll be in bed with a face mask on, watching reality TV and John Mayer’s live feed. It’s not negative; it’s that I’ll lurk around, watch everybody’s, but never show my own face. [Looking up as a woman walks through the door] Hi, mom! That’s my mom, who just walked in.

Nice to meet you! Do you have any embarrassing stories about Emma as a kid?

Kelly Cunningham: A lot, yes. So many, which is why I’m now excusing myself.

That was merciful of her. Are you two close with your mothers?

KS: My mom is my greatest hero. The way that she’s supported me and been my rock—I couldn’t have done any of this without her.

ER: You couldn’t have. I know that because I couldn’t have, either. Especially when you start acting so young, you can’t do it properly unless you have a supportive, smart parent. They keep you grounded. My mom would drop anything for me, and the older I get, the more I realize how rare that is. My mom’s one of my best friends; we’ll snuggle in bed together and watch TV. I’m lucky.

You’ve both had early roles that, as growing actresses, you’ve had to move beyond. How do you deal with that managing of the image and avoiding getting stuck with a type?

ER: For me, I got really lucky with Ryan Murphy giving me an opportunity at a very transitional point in my career to play this amazing role. He gave me confidence and told me, “I know you can do this. I believe in you for this. I want you to do a few episodes and let’s see what happens.” I was at an age where I was asking myself what I wanted to do and who I wanted to work with. The two years I spent on American Horror Story helped me grow, and that was a turning point for me because I realized I could make the roles what I wanted them to be and not feel scared of what the public perception might be.

KS: The life of an actor is so uncertain, so when you’re on TV and working with people you like and trust, it’s great. I could develop this character over a long period of time, so many opportunities to experiment with different choices in how you play it.

Emma, you’ve been at this a little longer than Kiernan—any sage counsel to offer?

ER: I would never do something as ridiculous as think I could offer advice to someone younger than me. My whole life, people have asked me, “What advice has your aunt [Julia Roberts] given you,” and it’s the same answer every time: "You only learn from experience." I can tell you everything I know, and that will prepare you for nothing. Live as much as possible, and even if it’s not a great experience, it’ll build you as a person. Damn, I’m hungry.