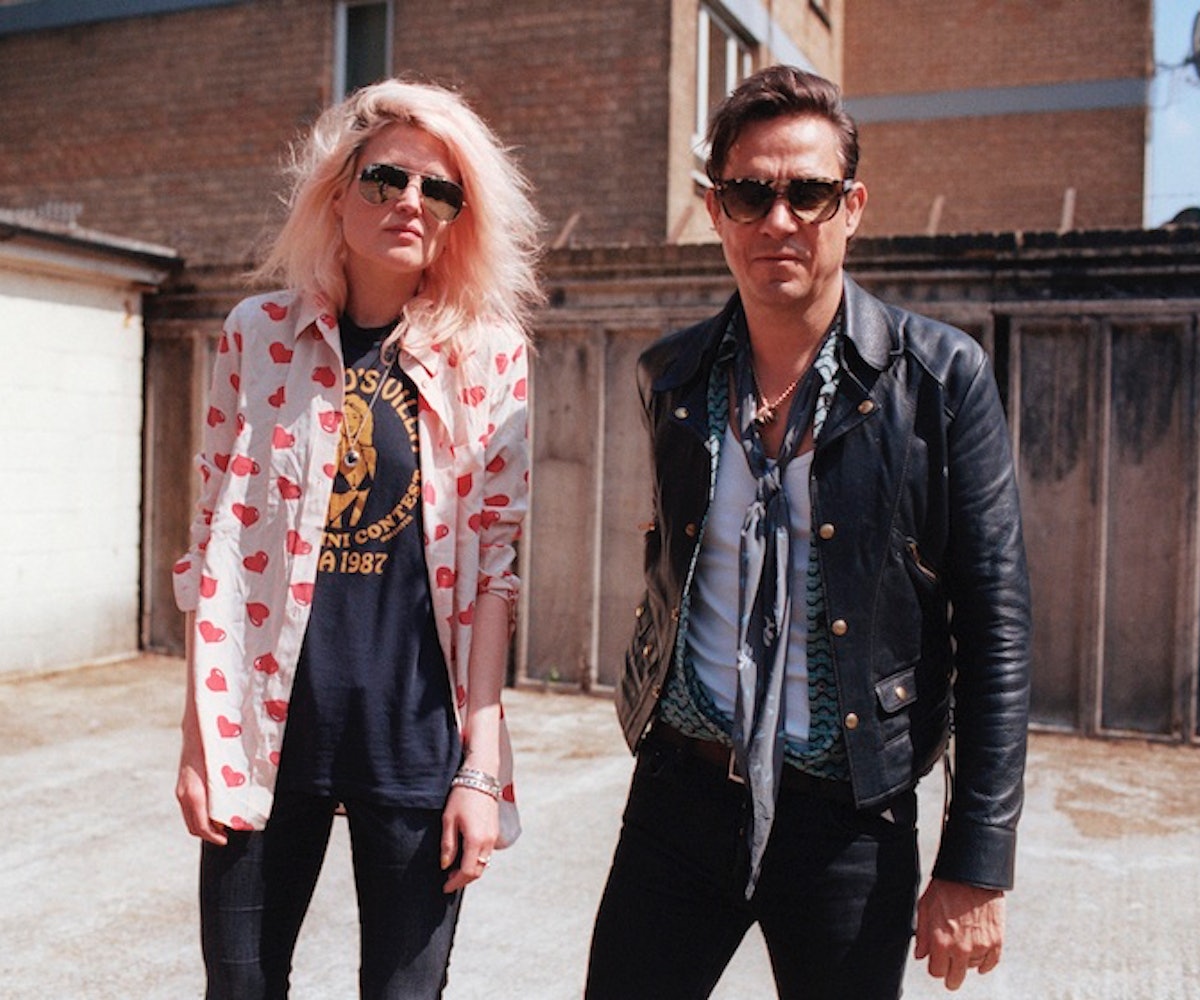 all photos by dan wilton

Among the magazine stacks and vintage guitars scattered around The Kills' London studio, Alison Mosshart scrapes back her bleached mane to reveal cat-eyed lids squinting through a plume of cigarette smoke. Wearing a beat-up leather jacket and battered black boots to match, her bandmate, Jamie Hince, refills a French press.

The international duo (Mosshart is based in Nashville, Hince in Highgate, a suburb of North London) have converged to begin work on their first studio album since 2011’s Blood Pressures—and are enjoying the novelty of doing so in the same room. “We’re often in different countries when we’re writing,” explains Hince. “There are no songs until the very end when we come together—I kind of like the disaster of it all.”

It’s still early, but if what they’re listening to is any indication, expect a disco-funk-dub take on The Kills’ special brand of sparse punk rock. “I’ve been picking up a lot of old-school vinyl,” says Hince. “I never really understood why a dub song has dub production and a hip-hop song has hip-hop production. Why can’t a rock record have R&B production? I like messing up forms and making something new.” The strategy carries over to their artistic output as well—The Kills will not be tied to just one medium.

Mosshart recently exhibited a vibrant series of abstract portraits as part of a group show at New York’s ArtNowNY gallery. “That was a little scary,” she admits. “I’d been painting forever, but outside of our album artwork, I’d never shown anyone.” Now Hince is gearing up to show a collection of his photographs at New York’s Morrison Hotel Gallery. “I’m in this dilemma at the moment,” he says. “There are pictures of my wife in there. Do I protect my privacy or put it all out there?” (Of course, maintaining any semblance of a private life is doubly complicated when you’re married to Kate Moss.)

With external creative pursuits keeping them busy, not to mention an album on the horizon from The Dead Weather, Mosshart’s supergroup with Jack White, what keeps them returning to The Kills? “I’m constantly thinking about music,” says Hince. “How it can be different, how it can move forward. I have so much energy and drive for The Kills, and sometimes I ask myself if I’m ambitious enough with other things. I just don’t care enough about anything else.” Mosshart echoes the sentiment. “I love other art forms; it’s all part of the creative process. But performing music is the greatest thing in the world to me. The second before you step onstage, you feel like you’re about to go skydiving. There’s nothing like it.”