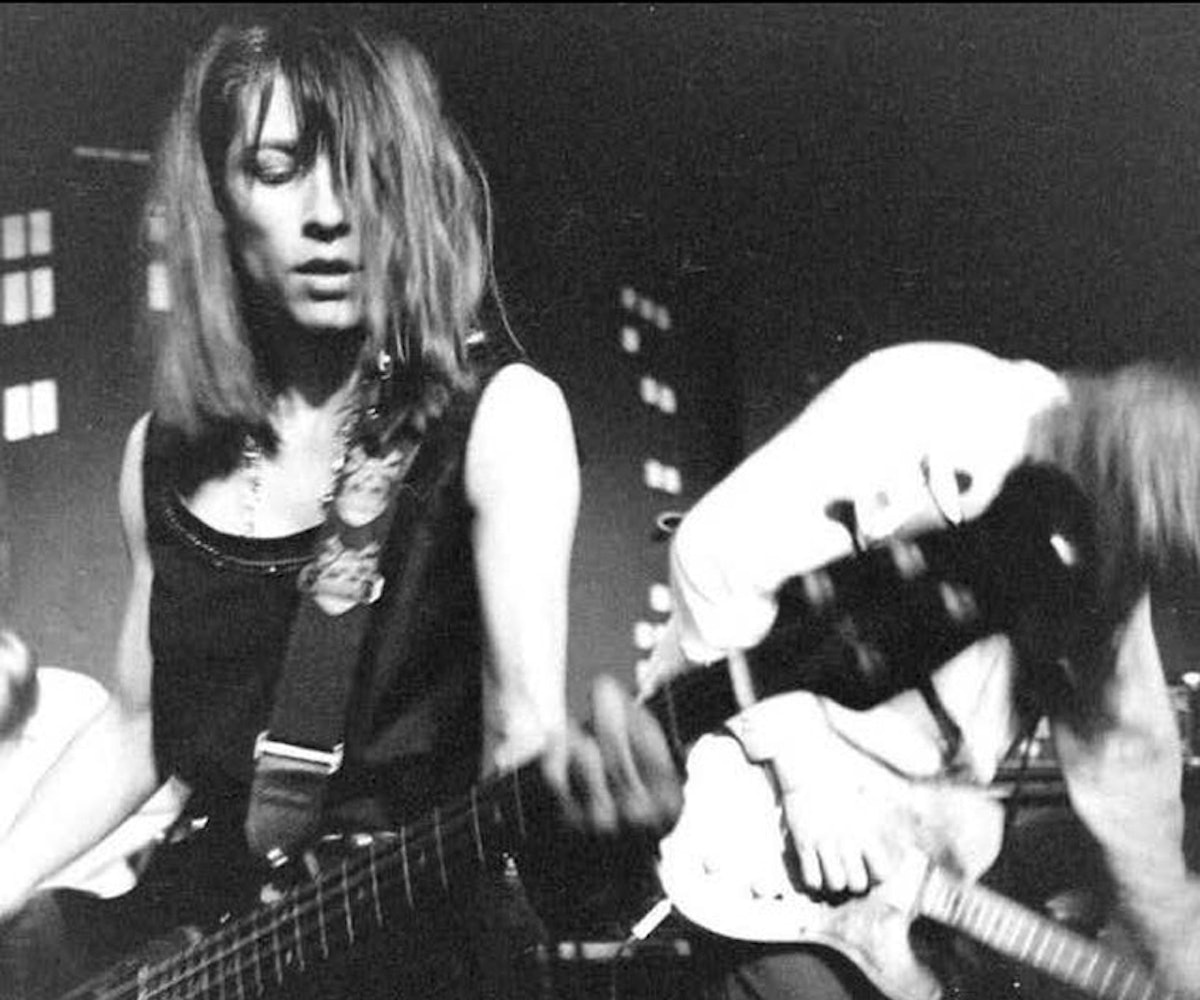 Imagine you're sitting at your desk, headphones blasting "Kool Thing" by Sonic Youth, when you're asked to interview Kim Gordon about her new memoir

Girl in a Band

. Inaudible mumbles, squeaks, and tears ensue, followed by a very shrill "YES!" Questions run through your mind: "Do you think she'd sign my first-edition LP of

?" "Do you think she'd take a selfie with me?" Turns out none of these are possible, as the interview is limited to a 30-minute phone call, but, hey, you're speaking to the goddess of cool herself. You mentally prepare yourself

After the call, you take a long, deep exhale and realize that Gordon is everything you thought she would be: smart, funny, wise, and fucking rad. I can thankfully say that all of this happened to me (and I'm still not over it). Read the entire interview below and don't forget to pick up

Girl in a Band,

which is so brilliantly written, heart whelming, and inspiring that I've already devoured it twice.

Why did you decide to write a book in the first place?

I hadn’t really thought of writing a memoir, but I feel like writing is a good way to figure out what I’m thinking or feeling by using it as an outlet—and I just wanted to try to make something. Originally I had thought of making some kind of art book, but people started approaching me about writing a memoir, I think, because Patti’s [Smith] book did so well. I never would have thought of making a mainstream book like that, so this is probably the most conventional thing I’ve done. But you know it was an interesting experience, I’m really happy that I did it now.

Did you read Patti’s book or any other memoirs while writing yours for research or inspiration?

You write very freely about your family and personal life. Was it hard for you to open up?

Yeah it was. Some parts were much easier and fun to write about, and others were painful and difficult. It was hard to integrate what my art practice is into a pop culture genre, essentially. And sometimes you don’t know what’s too much information, what’s boring, what’s interesting—it’s so hard to tell. But I just went with my gut instinct, you know, intuition. Since most people are reading the book because I was in Sonic Youth, I didn’t want to give that much attention to my [private] life. And there are so many things I could have written [about the band], but I just kept reminding myself that someday someone will write a really good Sonic Youth book. This book doesn’t need to have all that.

What was the most fun memory you got to relive while writing the book?

I liked writing about L.A. a lot because I liked thinking about L.A. That was my favorite thing to write about. It just sort of it’s so… some places seem like New York where everything is right in front of your face and in order to get any distance you have to kind of… your body just buzzes with the energy with the city. You know in L.A. everything is kind of set back, so it’s really conducive to just lay back.

I left out some things. I’m trying not to torture myself with the things I left out. I can’t really think of anything off of the top of my head but I did leave out that phrase about seeing Henry [Rollins] singing in the kitchen because he was like, “Did you put that story in?” and I was like, “Oh shit”, and I tried to go back and put it in.

What advice do you have for younger women nowadays, like how to get through the shittiest parts of life?

Just know that if you stay the course that you just have to be patient. Things accumulate and build in your life even if you don’t think that they’re adding up to anything. And just to be true to yourself and not suppress yourself in relationships. Easier said than done, but I guess, yeah.

What advice would you give to your younger self?

Well, I guess to have been more like that. [Laughs] But I mean in terms of being true to you, and not catering so much to other people.

What is your take on feminism today and new feminist movements emerging now?

I think feminism changes almost every five years, but the bottom line is really that it is about equal pay and equal rights in its simplest and most profound form and the rest of it is all kind of…I don’t know. We’re all sort of consumed. I think it’s important to know how women are being addressed as consumers and how men are also equal to women.

Is there any specific feminist movement happening right now that you’ve been into or sort of following?

I like interesting writers like Maggie Nelson and how she writes about gender and relationships. She has a new book called The Argonauts, which is amazing. It’s just about labels and gender and it’s also kind of a love story.

What about your connection to the fashion world?

I’m a visual person, I guess I kind of like the advertising for fashion, there are interesting ads, I don’t know, I don’t really care. I mean there was a fantastic show at The Met I think it was maybe two years ago now it was called like “Impressionism, Fashion and Modernity” and it was all about the impressionists and Manet and how they used fashion and how it kind of showed how fashion brought women out of the house and into society the room of the white day dress and in the center of that room would be a mannequin with a white day dress that was the same as in one of the paintings and then around the room would be various painters doing their version of the white dress from that period. And then there would be the black dress. But it was really fascinating. I’m interested in fashion because I like how it relates to culture.

I’m pretty much a tomboy. I don’t really buy designers. I like Acne, but it’s hard to find everyday things that are cool to wear so I buy mostly vintage because that’s just what I like.

This is kind of a weird question, but how have you stayed cool all of these years?

Oh, thank you. I don’t think of myself as cool, I think of myself as pretty nerdy. I think my daughter is cool. I don’t even know what that word means anymore. Like when you’re a mom it’s hard to feel cool. I feel cool in the moment when I’m maybe playing music or coming up with a good idea—but otherwise, no.

Does Coco think you’re a cool mom? Like, does she listen to Sonic Youth?

I don’t think so. I think she looks now at some things from the past or maybe some outfit I wore that she just saw a picture and maybe she thinks it’s cool, you know.

Do you have a favorite Sonic Youth album?

I guess Washing Machine because it was fun to record, and recording at night was fun. I liked the production of it.

What about your favorite album cover?

I like the Daydream Nation cover because of the font and the package, but not the inside picture of me. Certainly the Goo cover, and Mike Kelley’s Dirty cover, as well.

Do you have a favorite female musician of all time?

I think Tina Turner is amazing as a singer and as a performer. I like Joni Mitchell, Billie Holiday, Mary Timony, Kathleen Hanna and Kathi Wilcox—everyone from Bikini Kill was so, so good.

What are you working on these days? Is there anything you have brewing for 2015?

Well I have a couple of art shows soon in New York, and things like playing Body/Head shows. But mostly I’m concentrating on doing my work.

NEXT UP
Entertainment
Björk's Music Video Evolution, From Fresh-Faced Star To Avant-Garde Master
Life
October 2022's Must-Read Book Releases
Life
Gabi Abrão's Notes On Shapeshifting Will Soothe Your Existential Woes
Life
Rachael Finley Never Got A Guide To Life, So She Wrote Her Own