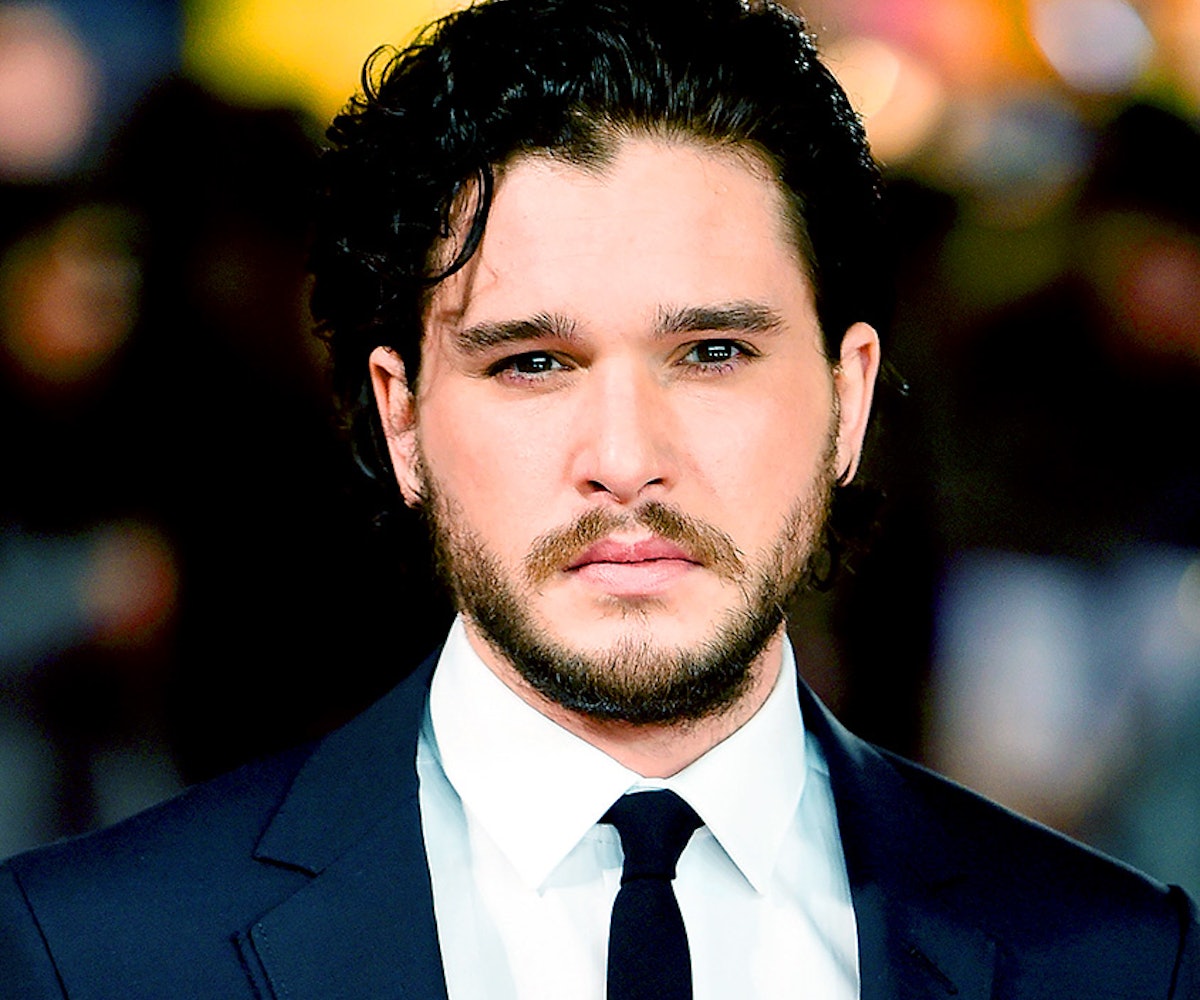 Kit Harington, it appears, likes to get dirty. The actor, who is cemented in our popular consciousness as Jon Snow, the Lord Commander of the Night's Watch and the bastard son of Ned Stark, has a hard time staying out of the mud—literally. In A Testament of Youth, out Friday, Harington plays Roland Leighton, the love interest of early feminist/pacifist Vera Brittain. And for the role the actor got to drag his clean-shaven, short-haired (gasp!) character through the trenches of war, poised in the position fans so often equate with his Game Of Thrones part.

However, unlike Snow, Leighton was a real person who fought in a real war—not just a war of the seven realms. That was was World War I, which was responsible for creating the "lost generation," a term coined by Ernest Hemingway to describe the young people who came of age during the first modern, global war. Leighton's life took on greater significance because of his friendship and then subsequent engagement to Vera Brittain, whose own memoir captured the toll the war took on the educated youth of Britain—and why that generation was, in particular, lost. The film adaptation of her story focuses on her, her brother, and his friends (one of whom includes her lover Leighton), and their role in the war. It's an expansive, achingly beautiful portrait of a devastated England. The film, to be honest, is a sad watch—as anyone who is familiar with Brittain's writing knows how it all ends. But there is joy found in the chemistry and affection between Alicia Vikander's Vera and Kit's Roland, which is worth the watch alone.

Of course, Kit is also in the midst of one of the greatest plot lines in the Game Of Thrones' trajectory, having just met a massive army of the undead lead by White Walkers, so it was impossible not to chat him up about what is next for Jon Snow (and Jon Snow's hair)—which, luckily for us, he happily obliged. Also, we discovered he is kind of a history buff and pretty feminist, which made our hearts sing with happiness.

Could tell me some of the things you discovered about WWI that you didn't previously know?

Well, I'm a real World War I buff. I studied it at school and I have a real interest in it. It's a really historical piece of time. I am really interested in the literature of World War I. I love the war poets already, so I kind of had a lot of research to go off of from my own understanding of it.

WWI really is like a lost generation. In American schooling we don't spend as much time with it as we do with WWII, so it was so fascinating.

That's quite interesting. I think we spend more time on WWI, yeah, definitely from my education.

Well, we kind of came in late to the scene, later than Britain did at least. Whereas, WWII was so much more influential in American foreign policy. So, why this role? There is not a whole lot known about Roland. You see so much of it through Vera. Why did you choose a role where you are basically a counterpart to her story?

I think it was for that very reason that I wanted to do this film. The very interesting thing about our film is it is about a woman who was a feminist at the time when women's role in society was changing and she was instrumental to that in some ways. But also, now, you don't see many films where women are the out-and-out lead role, and that's what Alicia is in our film and what our movie is doing now with feminism—it is trying to demonstrate how powerful that is. It was one of the reasons I thought it was a really interesting film. War told from a woman's perspective is not the usual way it's done, especially then. War told from the home front is not the usual way it's done. You don't really go to war in this film. You don't see the men's story, you see her story.

Yeah, definitely. It doesn't shy away from showing the cost of war either, or the mental cost of war which is so brutal for both Roland and Vera—especially the scene on the beach where Roland rebuffs her so seriously. Can you tell me a little bit about that?

Yeah, that was an important scene in the movie for us. He is experiencing PTSD, really. I did some research on that. She grabs him and he thinks for a second that she is a German soldier and throws her down and loses it. I loved that scene because it was all about him trying to hide what he has experienced from her, and her simply not accepting it. He can hide it from the boys and buck up and have a stiff upper lip and keep it all to himself with them, but the person who loves him sees through it. He can't hide it from her and is furious with her for that reason.

It was a really affecting scene to watch, especially because you and Alicia have just amazing chemistry. I mean, I bought the whole thing.

Crazy, I hate her in real life…joking, joking!

You have a lot of romantic parts and characters that are really romantic at their core. Are you drawn to the romantic?

Yeah, yeah, I think it's great. It's a wonderful thing to be able to play. I am romantic in real life. I love that kind of shit. Jon Snow is romantic but he is pretty useless at it.

But I think people like him because he fights his romantic side.

Yeah, he fights his romantic side, whereas Roland absolutely accepts it. He is so about romanticism and heroism. He was part of the generation, actually, the pre-war generation that were Wordsworthean. You know? If you read Rupert Graves's poems, they are all about heroism and war and fighting for your country. That's who Roland was. He didn't have time to become blighted by the war he died during.

The indoctrination during public school education…there is a bit in our movie where the headmaster is preaching to the boys and he is saying, "For your honor! For your country!" and that's what they were told. We are much more cynical now. They, the men, really believed in patriotism. It's kind of a dirty word these days...being patriotic, for right or wrong, it is. They were a different breed.

When pictures surfaced of you for this part, everyone on the internet (which is where I live)…

Everyone on the internet? Literally everyone?

Yes. Literally everyone on the internet freaked out and was like, "Kit Harington is unrecognizable! Look at him!" Do you ever just want to shave your head?

That was a wig! I couldn't cut my hair. Part of being an actor is going into a role and looking a certain way. I'm doing this ongoing role and I have to go about looking that way and that's what I just look like right now. Whenever Thrones finishes and the next role comes up, I'll change. (Editor's note: There is a huge potential spoiler at the end of this post below the GIF on the fate of Snow. Proceed with caution.)

Speaking of which, are we ever going to see you in a nice modern romantic comedy? Or, you know, something where you get to wear sneakers?

I'm not really big into romantic comedies. It doesn't really interest me too much.

But you do have a good comedic side…

Yeah, but I like farcical comedy. I like stuff that is quite bizarre and strange. I'm not so interested in the more prosaic romantic comedy. It's not really for me.

Would you do something more modern?

Yeah, I did something more modern recently. It was a British film, a spy thriller. I think it will come out in the US at some point. It's just whatever the right thing is. I'm quite intrigued by period pieces and it's quite fun to transport yourself.

And be very dirty! You're always in battles.

I think it's more interesting playing someone who you can separate from yourself.

That's very remarkable. I have some really quick questions… I have to.

Okay, Thrones time. I get it.

I'm a huge Thrones fan. I have been reading it since I was 17!

Really? Fuck off, really? That's amazing! So you've known Jon Snow longer than I have.

Yeah, but not as well! People are like, "I can't wait until next season!" and I'm just like, "Wait until you wait five years for a book." Do you think there is a possibility than Jon is the 'ice' in the song of Ice and Fire?

Do you think that Jon is right?

About everything? No, he's not right about everything. He's faulted. He has got problems like everyone. He is not an out-and-out hero and he shouldn't be looked at in that way.

What house would Kit belong in?

Very interesting. You want to ride some dragons?

I don't know. It's just the first thing that came into my head.

Who would think you'd suddenly be on a zombie show?

Yeah…well, I remember in the script it said, "These undead are running, god damnit, they're not fucking zombies." They put little bits in the script like that. When I was coming up in the boat it said, "Like George Washington crossing the Delaware...but with much better hair." And I was like, "Fuck off, guys!"

I keep seeing the GIF of the Night King going like this…and the words underneath it are "COME AT ME, SNOW."

I gotta check that out.

Book readers: As many of us have theorized, Jon Snow will probably end this season with the mutiny of the Night's Watch. HOWEVER, when we spoke to him, his hair was still long, which would lead us to infer he still needs it for next season—and he isn't going anywhere.