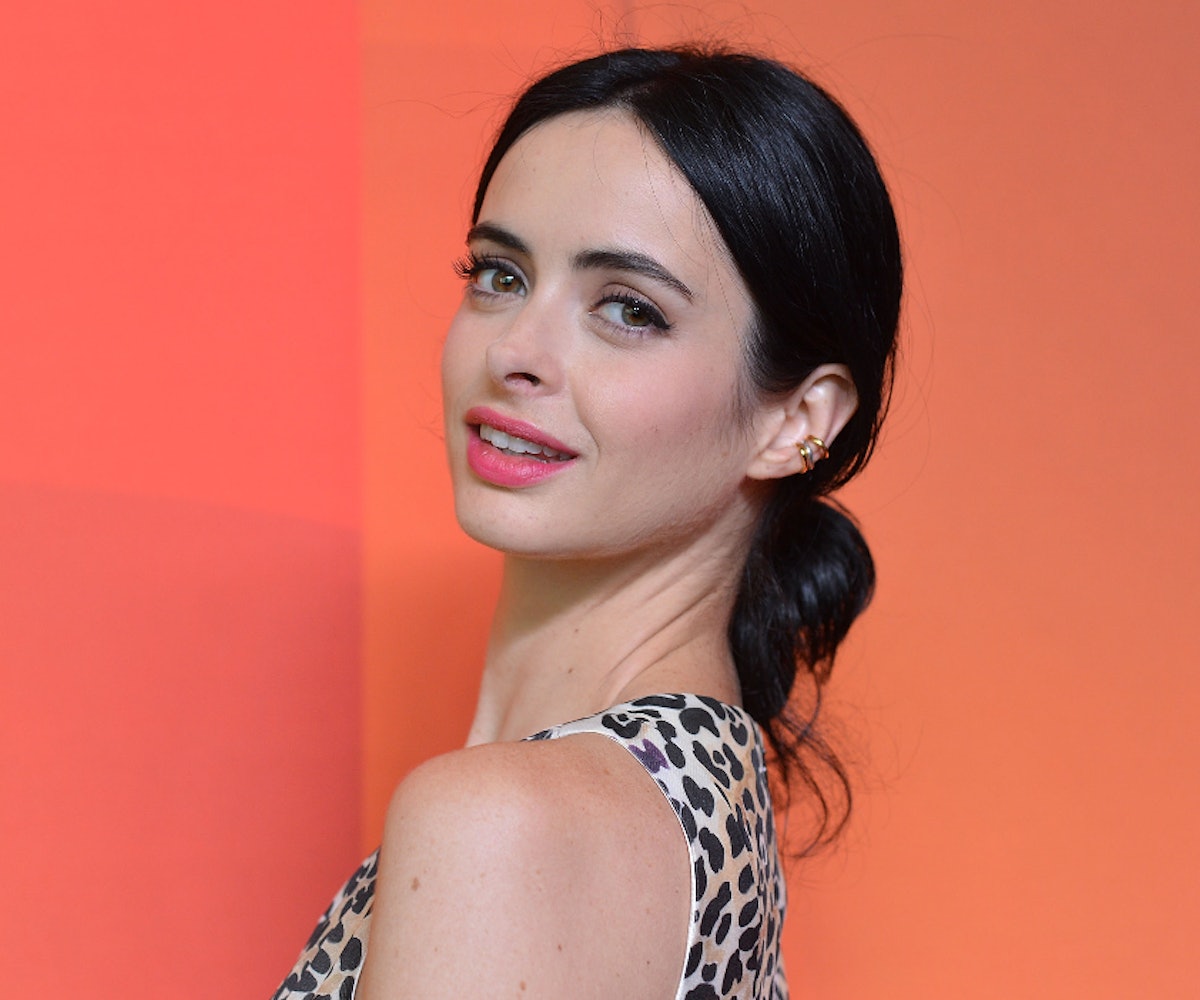 Before stepping into a suite at the Park Hyatt in New York to interview Krysten Ritter, a publicist waits outside with a warning: more

Don't ask too many questions about Ritter's new gig, as the lead in Marvel's upcoming Netflix series, A.K.A. Jessica Jones. Instead, focus on her new movie, Big Eyes, a portrait of the painter Margaret Keane (Amy Adams) directed by Tim Burton. This is now Ritter's reality, as the newest member of Marvel's ever-expanding Cinematic Universe, and you can tell she's excited. A.K.A. Jessica Jones--about a former superhero who tries to restart her life as a private eye--represents a watershed moment for an actress whose built a career out of supporting roles, even if one of those roles was as the unforgettable Jane Margolis on Breaking Bad. We spoke to Ritter about working with Tim Burton, binge watching TV shows, and of course, her new job.

So there’s no way I’m going to get Jessica Jones plot details out of you, right?No, but I can tell you it’s rad. It’s fucking rad. I can say that, right?

Was working on a Tim Burton movie also rad?That was a total dream come true.

You look like you belong in a Tim Burton movie.Yeah, it just took ten years to make it happen. But I’m hoping we get to do it again.

This doesn’t feel like your typical Tim Burton movie. It’s more restrained and naturalistic than his other films. What did he bring to it?There’s definitely a Tim Burton stamp. The first few frames of the movie look like Edward Scissorhands. And it’s a period piece so everything is very authentic.

You were working alongside Amy Adams, one of the best actresses we have. Is her talent palpable?Yes. My scenes are with her so we’re pretty much spending the whole day together, and we were in hair and makeup together. So I was in awe of her, and like a sponge, just observing her and how she carries herself and how she handles everything. The first scene that I had with her, when I was off camera I remember just watching her, and being like, Oh right, I’m in this scene, and having to snap back into it. She has so much going on behind her eyes all the time, she really is next level.

Batman.Oh yeah! Batman duh! That’s next for me.

Do you like it better than Christopher Nolan’s Batman?Here’s the thing. I think they’re so different. I love the Tim Burton Batman so I’m just going to say that, but Chris Nolan’s Batmans are great films.

Talk about the audition process for Jessica Jones. It must have been grueling.Fuck yeah. But I was down for whatever because if you want something you fight for it.

It must have been nice to know that once you got the part, you knew you’d be shooting an entire 13 episode season.Yeah, that’s cool. Also, I love Netflix and I think Marvel is amazing. They know what they’re doing and they’re proven. To be working with them and this rad writer Melissa Rosenberg who wrote Twilight and Dexter. It makes me almost overwhelmed with gratitude because I couldn’t have dreamt a better scenario.

Do you like to binge-watch shows?That’s exactly why I like Netflix. I’m not the kind of person who’s like, Oh it’s Thursday at 9:30, I better get home to watch that show. I think that’s how a lot of people are becoming.

When you were playing Jane on Breaking Bad, did you ever think that would become one of your most recognizable roles?I did not because I did the second season and all that was available was the first 7 or 8 episodes. I did have an offer on something else that was a popular show on network, but my agent was like, Let’s get you to audition on Breaking Bad. I did, and the clock was running out on this other offer and I really wanted Breaking Bad. I didn’t know that anyone would ever see it, I just thought it was a rad show.

Did you know from the beginning how her arc would go?I didn’t know details. I didn’t know she’d choke on her own vomit.

Is it strange that this role you did so long ago is still following you around?I think it’s pretty rad because I look at it in terms of her being so iconic. I’m a relatively young actress and I feel like I have two pretty iconic roles that follow me around.

What is the other one?The B---- [From the B---- in Apartment 23]. And that’s kind of what I wanted to do next: I have two great roles, what else can I make iconic? Enter Jessica Jones.

How did you find out you got the part and what was that moment like?Again, it was a long process. I got a call from the show, and I was completely speechless and overwhelmed.