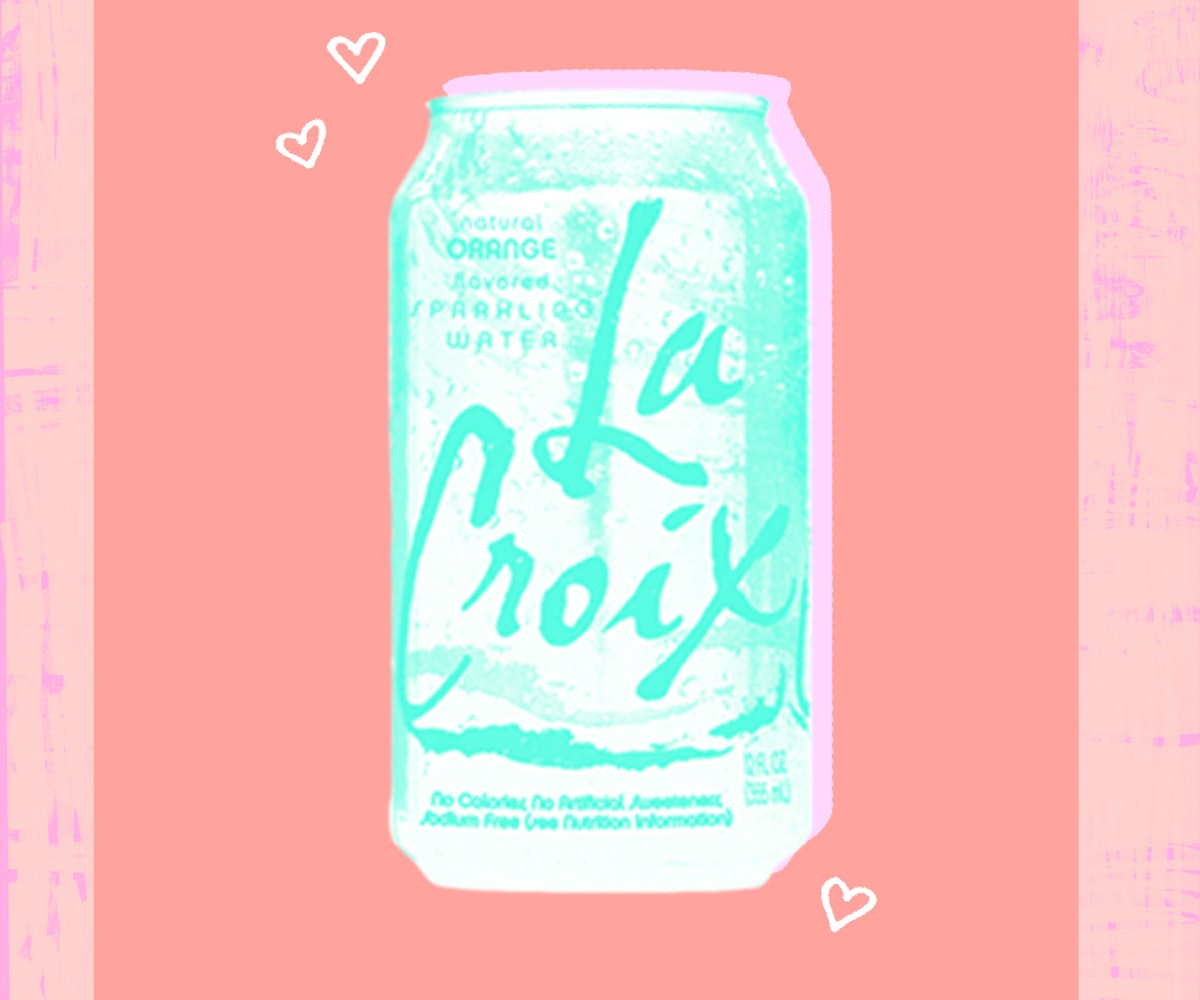 Let's just get this out of the way: We have already reached peak LaCroix. The cultishly adored sparkling water brand, whose cans look like they were designed by the same genius who created the turquoise-and-purple wax paper cups that were an integral part of any '90s childhood (you know the ones), is everywhere lately. Its presence has saturated the internet, with articles extolling its virtues, ranking its flavors, debating its value, and explaining what it is and how to pronounce it. (It's pronounced "la croy," but I'm going to keep saying "la kwah," because it's more fun and pretentious, two of my most defining qualities.) There are even tribute videos to LaCroix featuring an excellent brow game, as seen below.

Beyond the internet, LaCroix has also invaded our physical space, aka the real world. An enormous wall of stacked LaCroix cartons at a new Whole Foods in Williamsburg has now become the most Instagram-friendly spot in Brooklyn, New York. On a personal note, my refrigerator currently contains three cartons of Pamplemousse and not much else, and that's just fine because at least I've got the necessities covered. Whether or not you know how to pronounce it (or even how to spell it; it's just one word with weird capitalization), it's hard to deny that LaCroix is everywhere, and the best thing for you to do is just relent and accept your new sparkling water overlord.

What's that, you're saying? You've already bought into the cult of LaCroix? You're super-familiar with all 20 of its flavors? Even LaCola? Well, good for you. You're probably already tired of all the bullshit rankings of LaCroix, the ones which always either place Coconut way too low or way too high, because what good is a ranking without a little controversy thrown in, and nothing is more controversial than Coconut, which is basically the cilantro of LaCroix. So let's forget the whole damned ranking system and focus on what's really important: Determining your personality based on which is your favorite flavor of LaCroix. Basically, tell me what type of LaCroix you drink, and I'll tell you who you are.

I'm not going to say my methods are science-based (because they're not), but I will say that I would recommend that people use their favorite flavors much as they would horoscopes, as bias-based means to determine who they are and who they want to be. Drink up!

If you're drinking Pamplemousse, you're also pronouncing it "la kwah" instead of "la croy." Beyond that, you like the finer things in life, because, objectively, Pamplemousse is the best flavor. It tickles your tongue with a faint musky sweetness, a trace bitterness preventing it from ever being boring. It tastes not just of citrus, but of sex. And you like that, don't you?

Some people hate Coconut, thinking it tastes like sunscreen. This is untrue. It only smells like sunscreen. The people who love Coconut really, really love it, though. These people also like long hazy days lying on the beach, cute dogs, getting massages, sweets in general, and, basically, all good things. People who like Coconut are also really into shoes for some reason, and that reason is that they're aesthetes without being snobs.

Your dad's cool girlfriend likes Pamplemousse, but you're hardcore Tangerine because you're younger and cooler than she is. You also pay really close attention to when the newest shipment drops at Supreme. You know someday you'll probably switch to Pamplemousse, or even Coconut, but not yet, not now. Now is for Tangerine.

If you like Orange best, that's cool, because that means you have good taste since it's delicious. But, let's face it: Orange is also a little basic, and so are you. But not, like, regular basic. You're a little aggro-basic. Like, you drink Orange defensively almost and say things like, "Yeah, I like Orange. I don't fuck with that Cúrate." Okay, we get it. You're a man of the people. Whatever. Moving on.

You have a really hard time deciding where to meet friends after work and, therefore, always let them choose the bar or restaurant. You never take too long to decide what you're going to wear in the morning because you have six of everything in your closet. If you didn't drink LaCroix and just drank soda, you'd go for Sprite. Your favorite fruit is, paradoxically, an orange. Your favorite TV show is Friends. You have never been on Reddit.

You pronounce it "la croy." You also pronounce it "ape-ricot." You startle easily and often feel like the roof of your mouth is itchy. You're lots of fun at parties. You like black licorice. Your favorite show right now is Stranger Things. You don't eat meat.

You believe in ghosts.

You put lots of ice in everything because something about watered-down flavor really suits you. You like chewing on the unpopped kernels at the bottom of a bag of popcorn. You're kind of a monster, but that's okay, monsters are fun too.

Everything in the Cúrate line:

You will never apologize for who you are and what you drink and how many times a day you post on Instagram. You dance like nobody's watching. You have a real love-hate relationship with Gwyneth Paltrow, as in you were one of the first subscribers to Goop and own her first two cookbooks but just can't bring yourself to follow her on Insta, even if you do regularly check her feed. You doubt but are curious about the efficacy of bee sting-therapy. You're planning your next trip to Costa Rica this coming winter.

You think you like bold flavors, but what you really like is bold colors. You carry hot sauce in your bag, but you use it very conservatively. You've naturally found your match in mango, which is more about the absence of flavor and a big bold burst of color.

You eat a lot of yogurt. You've always been curious as to whether or not your cat sees you for who you really are.

Your favorite candy growing up was Runts, and you got them from quarter machines at the local bowling alley. They were stale and tasted terrible, but still, you loved them. You have the taste buds of a child. Frankly, we are surprised you're not drinking Mountain Dew.