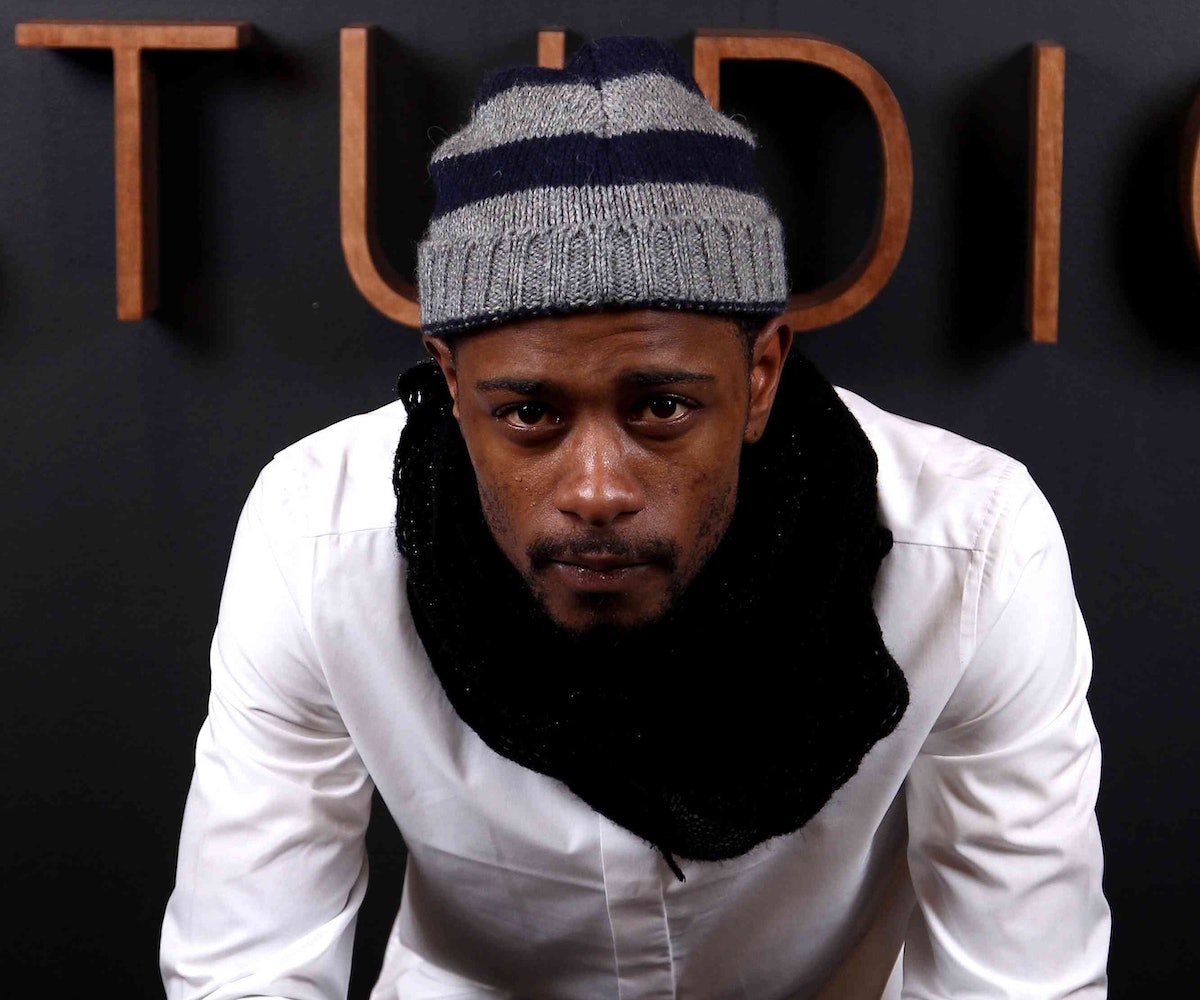 In 2016, Lakeith Stanfield took a giant leap in his budding career thanks to his role as the laconic Darius opposite Donald Glover on FX’s breakout hit Atlanta. So the 25-year-old San Bernardino, California, native was in a justifiably festive mood during last week’s Sundance Film Festival, a constant and electric presence on the party circuit. Stanfield was in Park City, Utah, promoting two films. He had a supporting role in The Incredible Jessica James, starring Jessica Williams, but it was his mesmerizing turn in the Audience Award-winning Crown Heights that reminded people why Stanfield is one of the brightest young stars in Hollywood.

In the prison drama, Stanfield plays the real-life Colin Warner, a Trinidadian immigrant from Brooklyn, New York, who was wrongly convicted of murder in the early ‘80s and spent 20 years behind bars until the tireless efforts of those closest to him on the outside eventually freed him. Warner himself was on hand in Park City to witness the premiere of the film, bringing Stanfield to tears with his presence. When we spoke to Stanfield, he was groggy and on his way to the airport, but still exuded the focus and determination that, with no less than six movies slated for 2017 and the second season of Atlanta on the horizon, has made him one of the busiest actors around.

You told me the other night that you spent time in a real jail cell to prepare for this role. Can you elaborate on that?

We just filmed in an old prison that was still operating at the time we were filming in it, but I think was on its way out of operation, and so they had some available floors at different times. We would shoot in the intervals that they would allow us to shoot in, and there were empty cells available for us there. I chose one of those, set up shop, and just chilled in there for a little while just to get more of a feel of just being in a cell. I turned what would be a trailer into a cell.

Did you learn anything about the psychological effects of being incarcerated?

You don't want to be in there, that's for sure. I think it's kind of obvious that humans require stimulation. We're social beings, so when you don't have access to those things, something's going to go wrong. We see how criminals are in the justice system. It seems to be just exasperating whatever issues they have or containing those issues without really necessarily or effectively addressing them. What the particular effects are, I don't really know, but it just seems to be overwhelmingly not effective, the current system we have.

The movie covers about 20 years of Colin’s life. How did you try and portray that aging in your performance? Did you change aspects of it as he grew older?

Yes, which was particularly difficult because it was shot out of sequence. None of it was shot in order, and it was quite chaotic because it was a quick schedule. I had to sort of try and be aware as much as possible where we were in the story, his disposition to 20 years versus 12 years, and how it would have changed. He would become slightly more comfortable with his surroundings but definitely not comfortable with the idea that he still has to live in this cage.

What was it like to watch the film with Colin for the first time?

There was no pressure. I was just happy that he finally is able to see his story realized in a different way. I was nervous that he might not receive it that well, but I was delighted to see that he did, and that's what brought me to tears at the premiere: the idea that they get to experience that happy moment after all this bullshit.

Is that true that when you decided you wanted to be an actor, you Googled how you can achieve that? What came up?

It was years ago when I did it. It was pages and pages of stuff that came up. But one thing led to another. I put the energy out there and just kept putting my good foot forward, and some things started to fall into place, and when the opportunity presented itself, I was ready.

Did you go to acting school?

Nope. Didn't go to school, didn't do no training, nothing like that. I barely made it through regular school.

Are you ever taken aback by your success, or did you always see this for yourself?

I've always kind of looked at it as if I would be an actor, you know? I'd be doing movies and stuff. But I try not to let the quote-unquote success creep into my awareness because it really doesn't mean much at the end of the day. There's always more to accomplish. There's always different limits and ways to push yourself, so I just appreciate where I'm at right now and continue to try and press forward. I don't really get caught up in it that much.

You’ve been attending awards shows recently because of the success of Atlanta. What’s that been like for you?

The Golden Globes and the Critics' Choice and all these awards and similar things are more just fun, and they have to be because they're boring, so you have to make them fun. It’s a fun little way to have fun with your friends and stuff. But other than that, it doesn't mean very much.

What can you tell me about Get Out?

Well, I didn't get a chance to see it, but Jordan [Peele] is quite a smart guy; he's got a lot of stuff in his head, and the world will be kind of amused by what comes out of that head of his. It's an interesting take on scaring people, or not really scaring people, just revealing to people what their fears are. That deep down kind of stuff that's already left there which isn't apparent. This isn't scary because it's much more visceral. And yeah, I think that's pretty much all I know about it at this point because I haven't seen anything.

With Atlanta, are you in touch with Donald Glover about season two? How involved are you in the process and how much knowledge do you have about what’s going on?

Well, he has a team of writers that are kind of consistently sort of gathering up elements and beginning to write and stuff like that, but I'm not exactly sure what their process looks like, whether he leads that process or how that works. But I do know that I'm fortunate, and all of us are fortunate, to be able to be doing different things, because not only does it allow us to live, it also allows us to soak ourselves in more creative endeavors so that way we can bring back more to the project. And I think that's what's going to happen with Gambino when he goes to film Star Wars. He's going to be even more enlightened about certain things and bring them to this, and bring us in a new direction, too; shout-out to Tame Impala. Everybody's moving in a new direction, and so it's a beautiful thing that we could all come back to the same place again after so much time, and hopefully things will fall into place.

Do you have a group of people who are guiding you and helping you make good decisions?

Yeah, I've got my friends and stuff who are helping me figure out how all of that's going to fall into place. We're just always trying to make moves that make sense, so not necessarily just stay busy but just do stuff that we feel is right. I've got a crew of people that are helping me sort of figure that out.