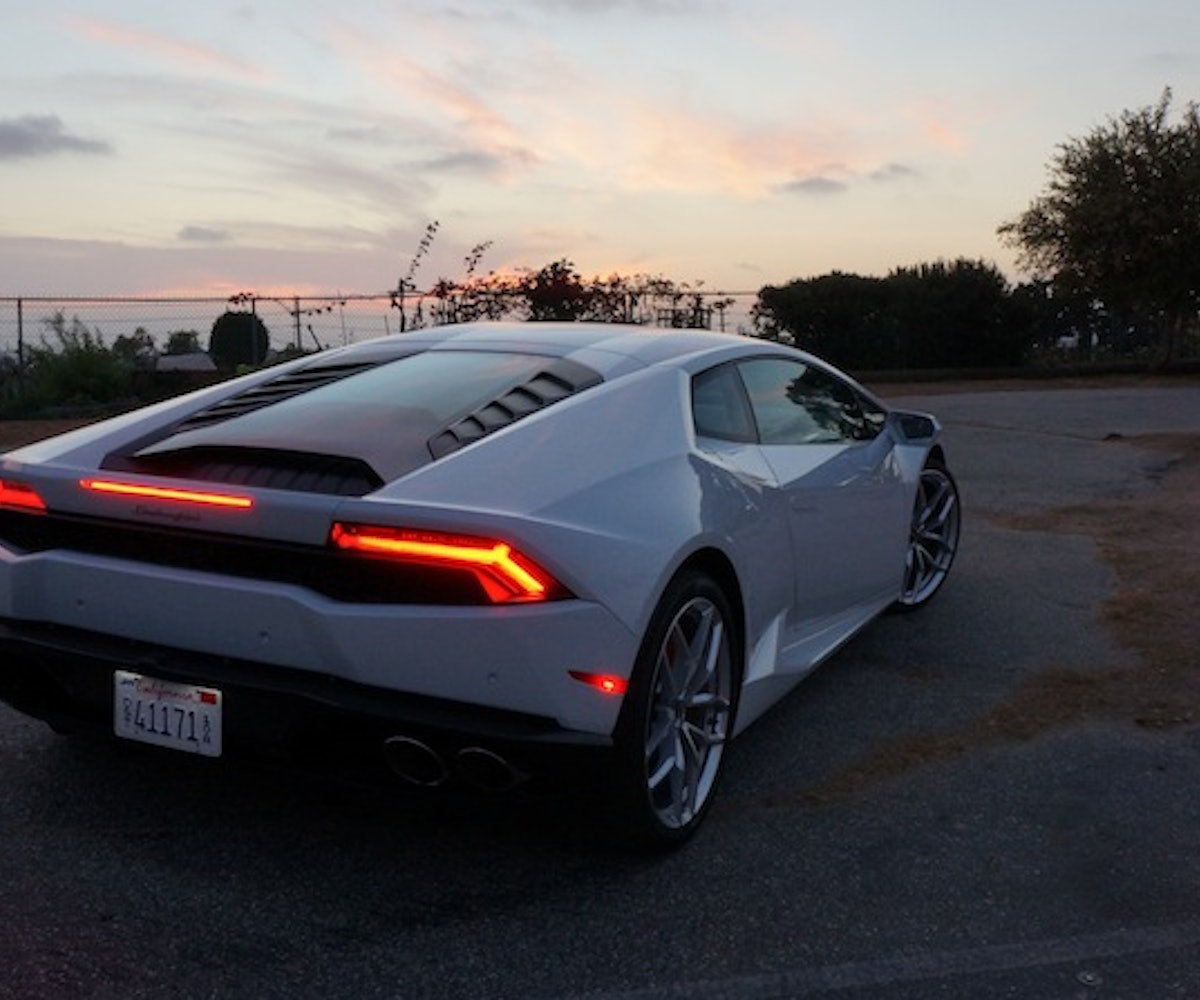 Some cars woo you with stunning exterior lines, with curves that make your heart lilt.

more Others do it with brute force, pounding that same heart to meth-driven levels till it's frayed and near flatline, some coddle you with leather culled from the softest cow bum. While still others offer such a superlative level of nerd-crunching engineering and technology that you can almost see the algorithms expand out from the windshield a beautiful mind-style.

And then there’s the Lamborghini LP 610-4 Huracán. One of the rare mechanical hat tricks that accomplishes all of the above.

To put the LP 610-4 Huracán into context, consider the car it replaces. The Gallardo is not only the most successful charging bull ever, it has also outsold all other Lamborghinis combined. After Audi’s purchase of the storied marque in 1998, the Gallardo single-handedly elevated the once financially troubled brand into solvency.

Sure, Lamborghini’s place in the Supercar Pantheon was already entrenched thanks to the Miura, the model that started it all. Then there were poster-fodder dream machines with names like Countach, Diablo, and Murciélago. But the Gallardo, that’s the founding stone on which the current House of Lamborghini was built.

Things aren’t getting any easier in the world of supercars, not for those trying to break their way into the lucrative market, and not for those trying to stay afloat. Never mind the constant influx of niche auto builders offering cars with ever more outlandish specs and outrageous carbon-fiber bodywork. There’s brutal competition already entrenched in the form of the Ferrari 458 Italia (recently updated in Speciale form) and the McLaren 650S, a just-released update on the MP4-12C that is one of the most immaculate machines ever built. As De La Soul would say, “Stakes is high.”

But oh, boy, has Lambo delivered on their Gallardo follow-up. First off is the design, imagined by Filippo Perini—the man handpicked from Alfa Romeo after he helped pen the stellar 8C Competizione. It is a rare car that can absorb a brand’s DNA, digest it within its own engineering framework, and then manifest sheet metal that is both authentic and yet evolutionary. That is the Huracán.

So many of the new breed of one-off wannabes bite Lamborghini’s style—more so than any other manufacturer—that in some ways the angular Lambo look has become the de facto mid-engine supercar blueprint. While there’s no need to reinvent the wheel (Lamborghini having invented that particular wheel), there is a need to stay ahead of the curve. The Huracán takes the highly geometric, sharp-plane style of its big brother Aventador and softens it in just the right amount, in just the right places. You can see where Perini took the fluid voluptuousness of his Alfa Romeo 8C and spliced it into Lamborghini’s genome. Then he simplified the Aventador’s ferocious rear end; although not as jaw-dropping, the minimalist approach, LED linework, and quad-exhaust tips combine to create one of the finest asses in the automotive kingdom. All this, wrapped around an advanced aluminum and carbon-fiber-hybrid chassis.

Offering adaptive suspension and a double clutch for the first time on any Lamborghini, the Huracán is the one car out of Sant’Agata you could actually use as a daily driver without incurring chronic whiplash. Despite its asphalt-scraping profile and race car sheen, the LP 610-4 is incredibly easy to drive. On Strada [Street] mode (adjusted via the driving dynamic selector switch on the steering wheel) the ride is astonishingly comfortable, steering is light, shifts throughout the seven-speed transmission are crisp, and throttle delivery is smooth and predictable. Given Sant’Agata’s well-earned reputation for brutality, the Huracán is a straight-up luxury saloon.

But dialed into Sport, or, Lord forbid, Corsa [Track] mode, the LP 610-4 undergoes a transformation. The suspension tightens, shift points become more aggressive, and the exhaust note turns into a whisper of the gods. One of the last naturally aspirated supercars left, the Huracán’s gorgeous 5.2 liter V10 offers power in ways that turbocharged engines simply cannot. A 202-mph top speed and 610-hp output may sell cars,but you don’t need to tease those thresholds to experience exhilaration. On public roads, this vehicle can overtake anyone, at any time, at any instant. Envision being a quarter-mile ahead, drop the hammer, and you’re there. Fifteen cars between you and open road? A roar of the engine later and they’re overtaken. Combine that with the Huracán’s razor-blade handling, and there’s nothing for which you’ll be left wanting.

If Lamborghini made any miscalculation at all, it’s in making the Huracán too good. Who in their right mind would spend the extra fortune on the Huracán’s more bloated, boorish, inefficient sibling, the Aventador, when they could have a machine that’s superior in every way, for $200,000 less? Yes, the Huracán will secure a huge chunk of the supercar market share, deservedly so, just as the Gallardo did. And it needed to be this good to fend off brilliant advances from the likes of McLaren and Ferrari. But one of the victims whose market share will likely be devoured most by the Huracán might very well be the Aventador itself.

Text and photographed by Nicolas Stecher.