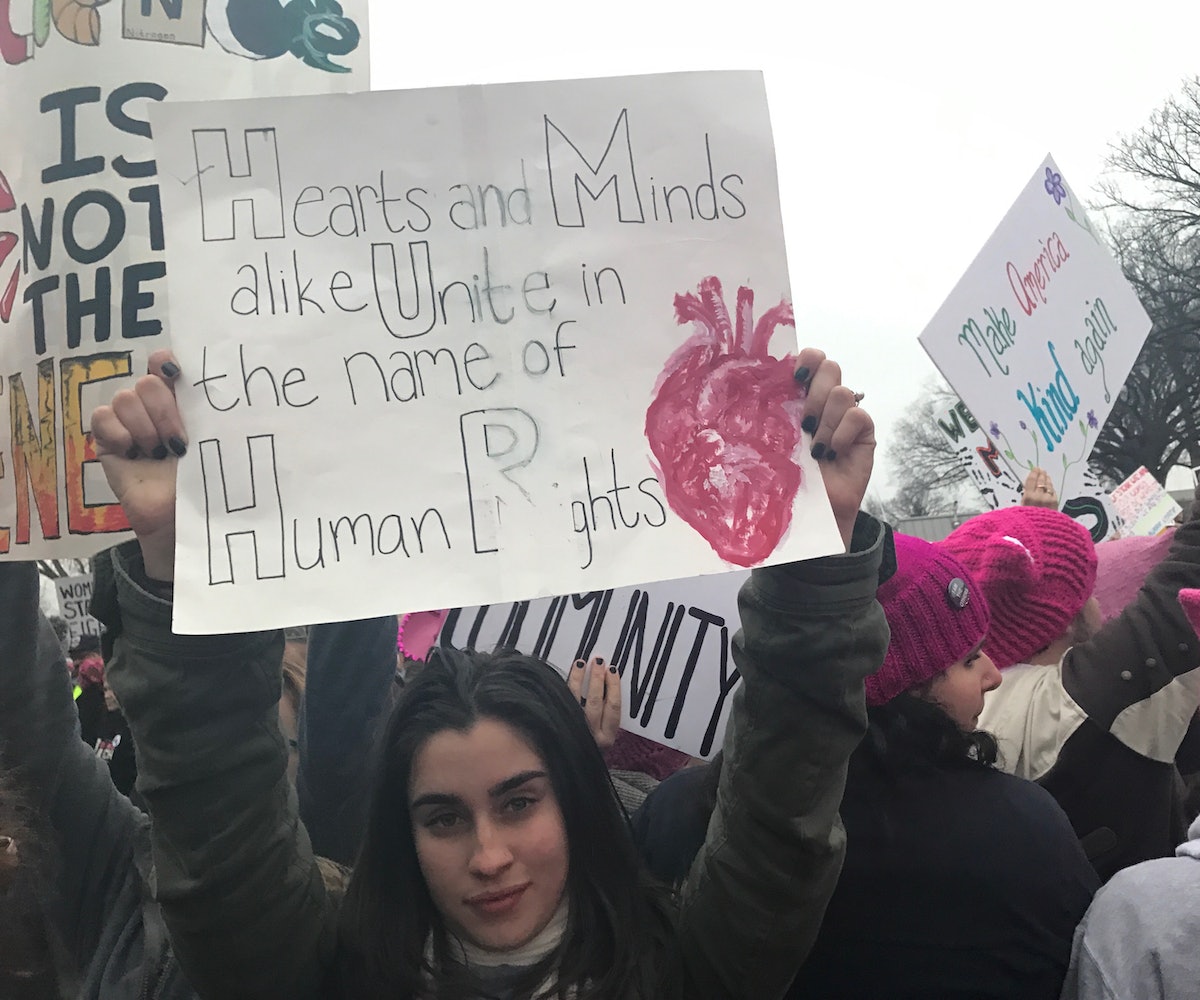 Fifth Harmony's Lauren Jauregui sums up her decision to take part in D.C.'s historic Women's March on Washington neatly: "I need to walk what I talk, you know?"

Talk, she does. At 20 years old, Jauregui is quickly becoming one of the most politically outspoken stars on the map, and can speak to everything from the crusade against Planned Parenthood to music industry sexism. In October, the Cuban-American came out as bisexual via an open letter to Trump voters that was scathing, to say the least. And on Saturday, she joined an impressive list of celebrities who took part in protest marches across the country and the world.

Though Jauregui admits the Women's March marks her first trip to the nation's capital for a protest, she says her interest in women's rights issues sparked while attending an all-girls high school in Miami, Florida.

There, "it was instilled in me to be a confident and courageous woman," the singer explains. "Every single girl that I went to school with is so inspirational and so powerful and so driven and so unafraid. I think that’s something we all need to instill in each other."

To Jauregui, this also means ensuring that women of all backgrounds and experiences are included in an intersectional feminist movement. As a young woman who is a member of the LGBT community and belongs to an immigrant family, she jokes that she falls into "three categories" of minority.

We caught up with Jauregui just after her arrival in D.C. to talk about her "overwhelming" experience at the march, the feminism stigma, and the power of millenials to make the next generation count. Watch Fifth Harmony's performance at the People's Choice Awards last week below, and scroll through for our Q&A with Jauregui.

Who and what are you marching for?

What were you feeling during the march?

Over-fucking-whelmed. Present, aware, peaceful, and ready to go. The most amazing thing I've ever experienced in my entire life. I can’t believe that I witnessed the history that I did.

How did the march alter your perspective?

I've spent so much time in my head and in my notes and in my journals about how much pain this world is in and how upset I am that nobody cares. Going out there today and seeing how many people really care, how many people are so down to use their voices, how many people are willing to fight tooth and nail... it was just beautiful. I was so emotional at so many points. I cried so many times. This is democracy. We are democracy.

It was the most incredible, humbling experience to be in the presence of so many humans who were so willing to come together. When I was there, we were trying to get to the bathroom and then trying to get back into the crowd, and it was absolutely impossible because it was so packed, and there was this woman who was in a wheelchair. We were trying to get up onto the ledge, and she was like, “use my wheelchair! Come on!” She literally let us use her as a stepping stool. It was crazy. Everyone was so helpful, helping each other out.

Do you think public figures like yourself have an added responsibility to be politically outspoken?

I think that in the entertainment industry particularly, people usually get into this business because they’re trying to just be the distraction for people. But for me, I don’t see the power in having a voice, and a voice that so many more people listen to than an average... I don’t feel right having that and not using it for the sake of educating. That’s why I think I was born and given this platform to begin with. I hate attention, I hate all of that kind of shit. But I think God gave me this voice for this purpose—to use it for the sake of uniting people and making sure that everyone knows that it’s okay to use your voice. You can be a young woman, and it’s okay to use your voice. You can be as strong as you want.

Growing up in Miami, you went to an all-girls school. How did that influence the woman you are today?

Honestly, I’ve been very blessed that I was able to go through Carrollton [School of the Sacred Heart]. I attribute everything that I feel and all of the passion that I have to that school. It’s an all-girls school, and it was instilled in me to be a confident and courageous woman. "Women of courage and confidence” was the slogan, essentially, of our school. I’m just so grateful because every single teacher I encountered, all of the administration, everyone involved, men and women alike, were there for the purpose of growth of each individual girl. And each individual girl was told how special she was and how much she could influence the world. I’m literally crying thinking about it [laughs]. Every single girl that I went to school with is so inspirational and so powerful and so driven and so unafraid. I think that’s something we all need to instill in each other.

The rise of Fifth Harmony is often framed as the return of the girl group. Why do you think your music resonates with so many young girls?

Some of our songs are empowering, but I feel like more so than our music, it’s who we are. We’re four women who are completely different ethnicities, completely different body types, completely different walks of life and opinions, and you can see that when you watch an interview, when you meet us. We have an energy about us that’s so unique and so intense, and it’s because of how much power we have in us as individuals, being confident, harnessing that power, and wanting to share that with other women. I feel like a lot of women hang on to our message, and it empowers them.

Have you always been so confident in your womanhood?

I’m really lucky, because I have a mother and a grandmother who always instilled my power in me, always, from the day I was born. And my father, too. My parents never made me feel like I couldn’t do something because I was a girl, ever. It didn’t matter what I wanted to do. My father supported me 1,000 percent, all the way, and never told me, “you can’t do that because you’re a girl.” And on top of that, the school that I went to, and the power I was given with my education. I’m really lucky, I got only power handed to me, and I made use of it, and I only want to share that.

What place do you think young people have in politics?

I think the youth is the movement. I think we are the ones who are starting this revolution, and we’re the ones who are going to see it carry through and be the ones to implement it. I think we’re in a really amazing time right now of consciousness awakening, the internet and all the connections we have to each other. All the young people involved right now, on the internet, seeing the injustice and having it there in front of their faces, it’s making them passionate and it’s making them aware. All the little kids I’ve ever talked to—little, little kids, like eight years old—they know what’s up. They’re like, "What’s going on? How is Trump president?" The fact that kids can differentiate that... I think the power’s in the youth.

You wrote in your open letter for Billboard that feminism needs "a lot of work." How can we fix that?

I think the whole stigma of the word feminism is such a problem. The only reason that anyone has an aversion to it is because it includes the word “fem," even though it’s an all-inclusive term. I think that aversion in general is the reason why we need [feminism]. If the word "feminism" bothers you, there’s a reason why it bothers you, and only because it involves women. The issue at the end of the day that feminism fights for is equality, men and women alike. Because men also have their own stigmas that they have to follow, and stereotypes they have to follow that are detrimental to their mental health. That’s something that happens to all of us, something we’re all experiencing. By harnessing that freedom, we're saying, “no, I want to embrace this term because it means that I get to be free.”

Are you surprised by Donald Trump’s success?

I would say I’m surprised, but I also know there is a lot of hatred in the heart of the country. It’s kind of the basis on which [the U.S.] was built, essentially, because it was built on slavery—slaves were the ones who built it. I feel like people are really empowered by money, and that’s all that [Trump] offered, essentially, besides all of the other detrimental things he said. The only people who are able to look past that are people who value the economy over human rights. That exists because money is all-powerful in this society, it’s a capitalist society, so a lot of people feel like they have no option but to progress only economically.

Do you have any thoughts on the effort to defund Planned Parenthood?

Just how important it is to recognize how they are responsible for so much more than abortion. That actually, abortion only takes up three percent of what they do, and everything else is just about female health and reproductive health, and making sure that women have a safe place that doesn’t cost an arm and a leg to get the medical attention that they need. People are dismissing a foundation that genuinely helps millions and millions of women across the nation for the sake of, just, myth.

Would you ever consider going into politics as a profession?

Is there anything you want to say to fellow marchers?

I love you, and we’re together. Let’s make some changes.