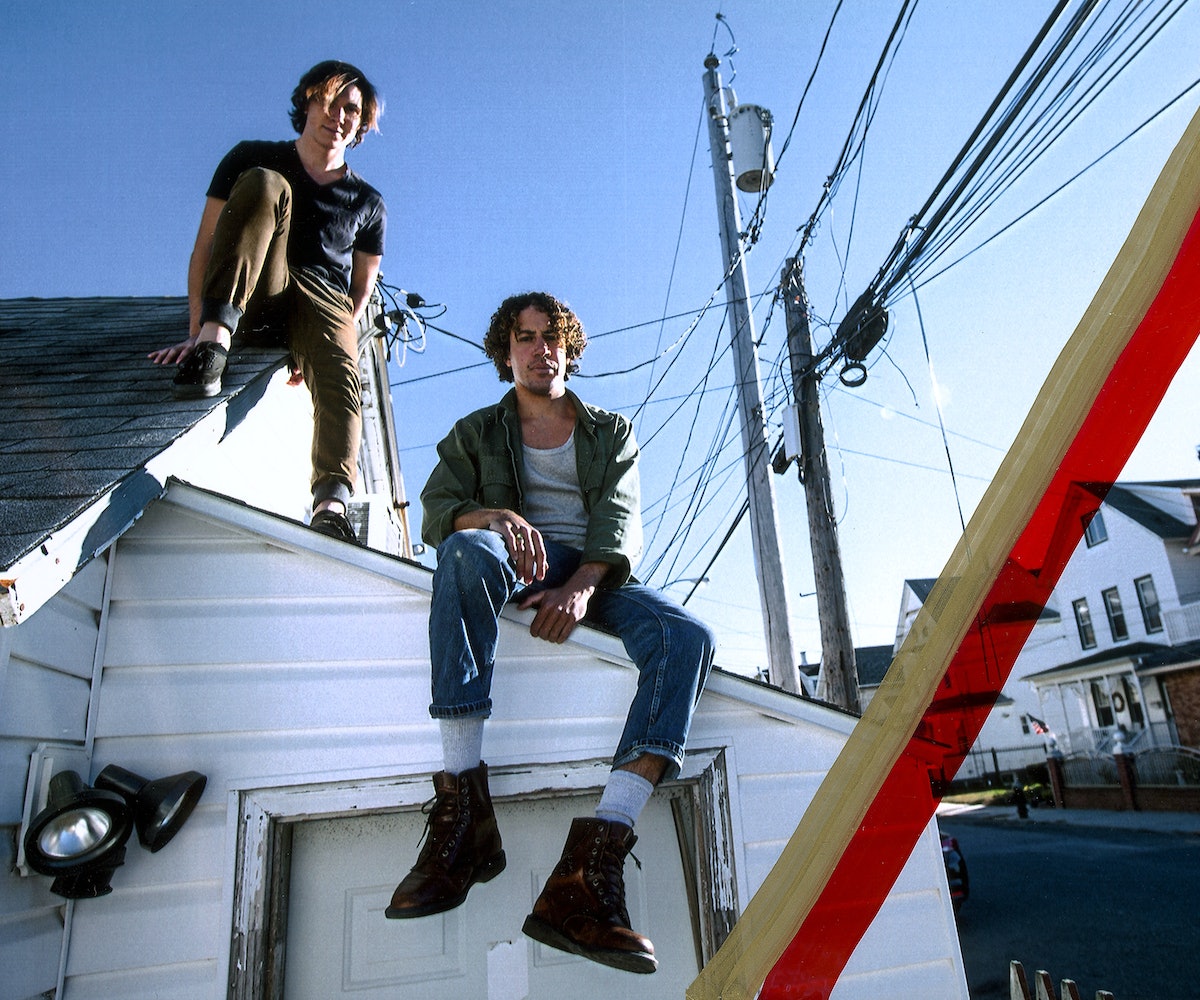 Some artists choose to hide their identities to build hype around their music, but for Danny Miller and Max Harwood, anonymity was entirely accidental. The Rockaway Beach-based duo, who record as Lewis Del Mar, never expected to blow up when they dropped their acerbic debut single “Loud(y)” on SoundCloud last June, so creating a brand was far from a priority. Over 300,000 plays and a major label bidding war later, the two are beginning to introduce themselves to the world. Their tersely-titled EP, EP, dropped last Friday, showing off Miller’s idiosyncratic vocals and Harwood’s percussion-heavy production over four tight tracks. We caught up with the band to uncover their origin story of one of 2016’s buzziest bands.

How’s it going, guys? DANNY: We’re good, man. We’ve been here in the studio all day, working on the record. It’s just in our living room, actually.

MAX: Our recording is sort of rogue. We work with what we’ve got.

Until the EP dropped, you guys were keeping pretty hush about your identities. Why stay anonymous for as long as you did? DANNY: It wasn’t intentional, honestly. It stemmed out of this place where we had spent so much time working on the music and we’d worked on the project by ourselves our here in Rockaway for almost two years. It got to a point in June when we released “Loud(y)” on SoundCloud that we really needed to release the project for our own sanity and we didn’t really have time to take press photos and do that whole shit. The photos we actually released with the project were just disposable photos that Max and I had taken. My father’s from Nicaragua so some of the photos I took there. Max’s parents live in Panama, so some were photos that Max had taken there, like the “Loud(y)” cover. To us, they really personify the project in visual form. We didn’t expect the music to be such a big deal, so it got dragged out. Had people not been paying attention it would’ve been a totally normal timeline.

MAX: In the end, it was cool to let the music speak for itself. We started with the recordings, and for those two years that we were working on them we didn’t think about anything else. Even the band name came towards the end; we just wanted to get the sound right. Inadvertently, it makes a lot of sense just to start with the music, because that’s what we started with.

So what’s the story behind the project? How did you two meet and start making music together? DANNY: Max and I have known each other since we were about nine years-old. Max was one of my only friends when I moved to the area and we just grew up making music together and playing in bands with our friends. We had a band before this one that we went on tour with for two years, this DIY garage rock project. We self-booked these tours and slept on floors and really did shit the hard way. Max and I have been creating things together for a really long time and Lewis Del Mar is just the latest incarnation. The goal is to make the music that only Max and I can make, and we feel Lewis Del Mar is the closest we’ve gotten to that.

MAX: When we were in this band before, we were right out of college and playing shows. It was cool doing the live band all the time, but we decided to break up that band partly because we wanted to take a step back and think about the sound we were creating. I’d gotten into production work and I felt I could produce this new project and get a lot more creative coming up with the sound that’s uniquely ours. That’s how we got back to the acoustic guitar thing and incorporating samples and percussion.

Your production definitely contrasts with Danny’s vocals and guitar. Do you feel you come from different places musically or has it always been a group mentality?

DANNY: We do come from different worlds, and it’s sort of part of the name. Both of our fathers are named Luis, and we took the Western spelling of the name with a ‘w’ and combined it with the idea of ‘Del Mar’, which pays homage to the fact that my dad comes from this small Caribbean fishing village on the coast of Nicaragua. It’s this idea that there can be these two people from different worlds and form this one cohesive project with one unified name to it. The goal is to create something that works in cohesion with all of its parts.

You guys post quotes from famous Latin American writers like Roberto Bolaño and Pablo Neruda on your Facebook page. Do you find inspiration for your lyrics in their literature?

DANNY: Max and I both studied English and Spanish, so there’s certainly this idea of Lewis Del Mar almost being an author’s name. Gabriel García Márquez is one of my favorite authors and he definitely inspired a lot of the lyrics on this record.

MAX: We studied in Chile for a bit when we were in college and we studied the magical realism movement in literature. Especially when Dan started bringing that into the lyrics, I started thinking about it from a production standpoint. With a song like “Memories,” where it really goes in and out of different sections, I sorted wanted to make a sonic personification of magical realism, like what it would sound like if it were music.

Which books would you recommend us to check out? DANNY: I think the entry into magical realism is certainly One Hundred Years of Solitude by Gabriel García Márquez. If you love that, there’s any number of avenues you can go down by amazing Latin American writers out of that canon.

After spending so much time in South America, do you feel like Latin music rubbed off on your actual sound, or was it more conceptual than sonic? DANNY: It was a total inspiration. When I think about rhythms and crafting songs, it sort of comes out naturally. A lot of what we make has Max sampling older Latin records that he fell in love with.

MAX: Dan would bring in these demos and a lot of times under the guitars and vocal melodies he’d have production ideas that he’d sketched out, like Latin percussion stuff. At first, I disregarded it and laid then drums on top but then I thought it was actually really cool and we should bring it in somehow. I’d gotten into hip-hop production, so we sampled from vinyl, the old school hip-hop technique, but we did it with Latin percussion ensembles.

How do you work in the samples when you perform live? DANNY: Max and I are live musicians at heart, and when we play live we have a five-piece band. There’s an element of electronic-triggered sound onstage, but we really try to recreate everything as naturally as possible so it’s happening in real time. There’s no loops or backing tracks. Our goal was to have the music feel living and breathing onstage.

The EP just dropped and you’re currently working on the album. What’s next on the horizon for Lewis Del Mar? DANNY: I think good times. We’ve been having so much fun. Max and I moved out to Rockaway, away from the city and our friends, just to live this to the fullest extent possible. We felt like Rockaway was the place that best personified the music and we had to be here to really make it come to life. We sacrificed and I think that to start to share this project with other people is really rewarding. In the near future, looks like we’ll be at SXSW in March, and we have some tour dates coming out relatively soon. We’ll see as things unfold.