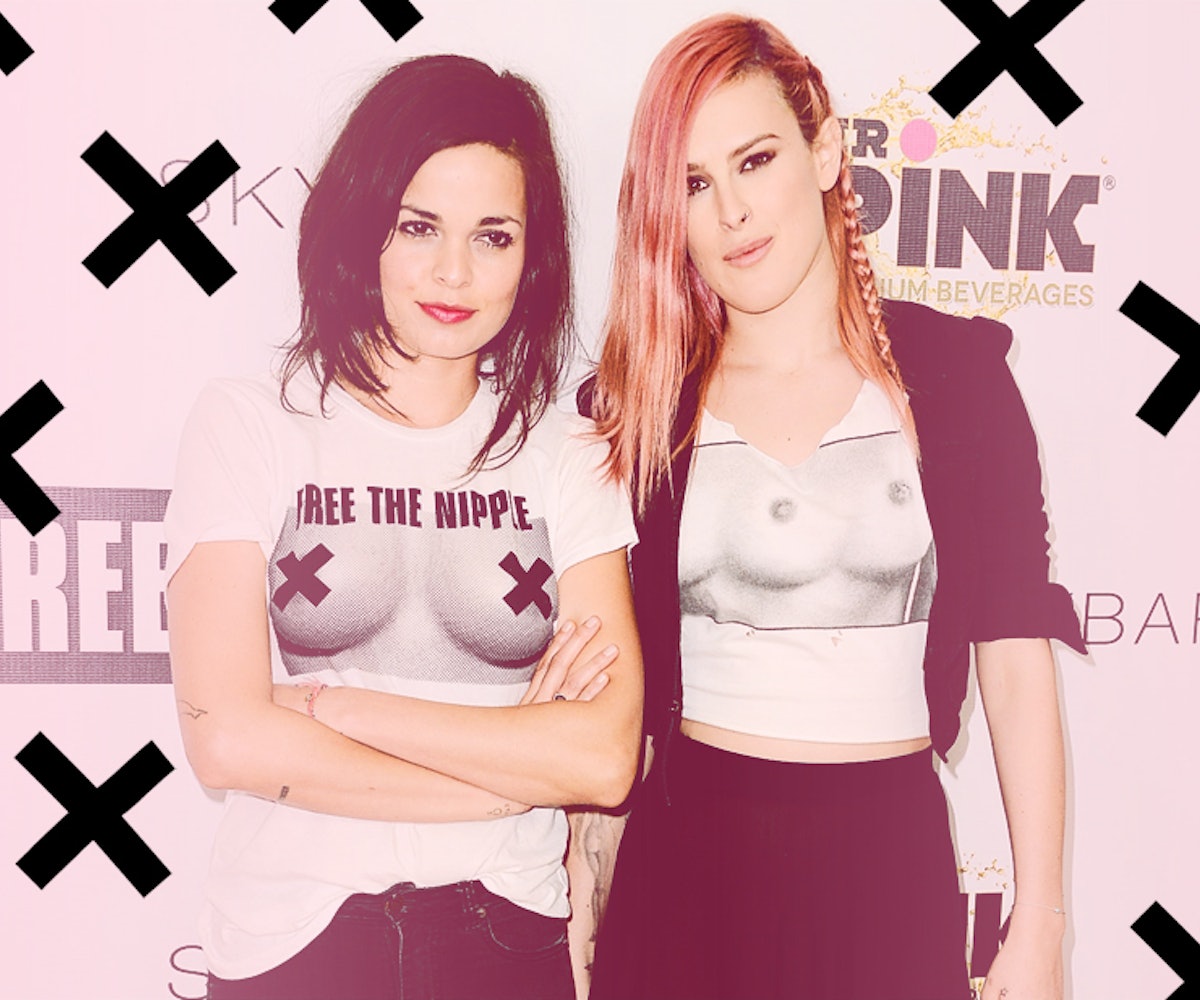 "Nipples are a trojan horse to talk about equality," Lina Esco says, for a third time. We're talking about the upcoming film Free The Nipple, which she directed and starred in. It tells the story of activists in New York City fighting to end the censorship of women's nipples, and she makes it clear that she doesn't want the overarching issue to be overshadowed by the film's headline-making name. For her, the censorship of bare female breasts is a metaphor for how women and men are treated so differently: "It's just like how women are still making seventy eight cents for every dollar a man makes," she says. "But no one would want to go see a movie called Equality."

In creating the film, it was important to her that the audience not feel like they were being preached to. "We needed people to give it the time of day," she says. The result is a fun, slightly disorganized, free-spirited labor of love. It's based on true events, some of which, interestingly, were happening while she was making the film as a result of her outreach efforts. #FreeTheNipple the movement gained steam among celebs and activists alike as Lina campaigned to get the word out about her movie. "It was art imitating life imitating art," she says.

There's also a lot of overlap between Lina's own emotional journey and her character's. She plays With, a journalist, who begins the film vaguely curious about nipple censorship and ends with a topless romp around Times Square. Lina herself was raised Catholic: "I was brought up to be repressed and shy of my body," she says. So, when it was time to bare it all in Times Square, she says, "I was flipping out." Though they had a permit to shoot, and it's legal for women to be topless in NYC, the cops told her that they couldn't film while topless because people on the street might mistake it for porn. "So we didn't obey the law or get permits for that scene, and we did it one take. I had never been topless in public. It was so liberating." She adds, "I think all women should try it, at least once. Ever since then, I haven't been the same. There's so much power behind owning your own body."

The film is coming out amidst nationwide conversations about police brutality and street harrasment, two things that are inextricably tied to the themes of the film but aren't touched upon directly. However, Lina says that it's all connected: "All of those issues are about equality, which is what we're talking about." She also adds that she's been repeatedly asked about street harassment and how womens' safety relates to legal toplessness. Her response? "Exposed breasts and rape have no casual connection." Preach, sister.

One of the biggest challenges that the #FreeTheNipple movement faces is how sensationalized bare female nipples are. "One time this guy came over to me and said he couldn't have a conversation with me without looking at them. I was like, at some point, though, you're going to get tired of looking at them." If that means more topless protests, so be it: "America might just need a big blast of boobies to get over it," she says, with a laugh.

Free The Nipple comes out Friday.