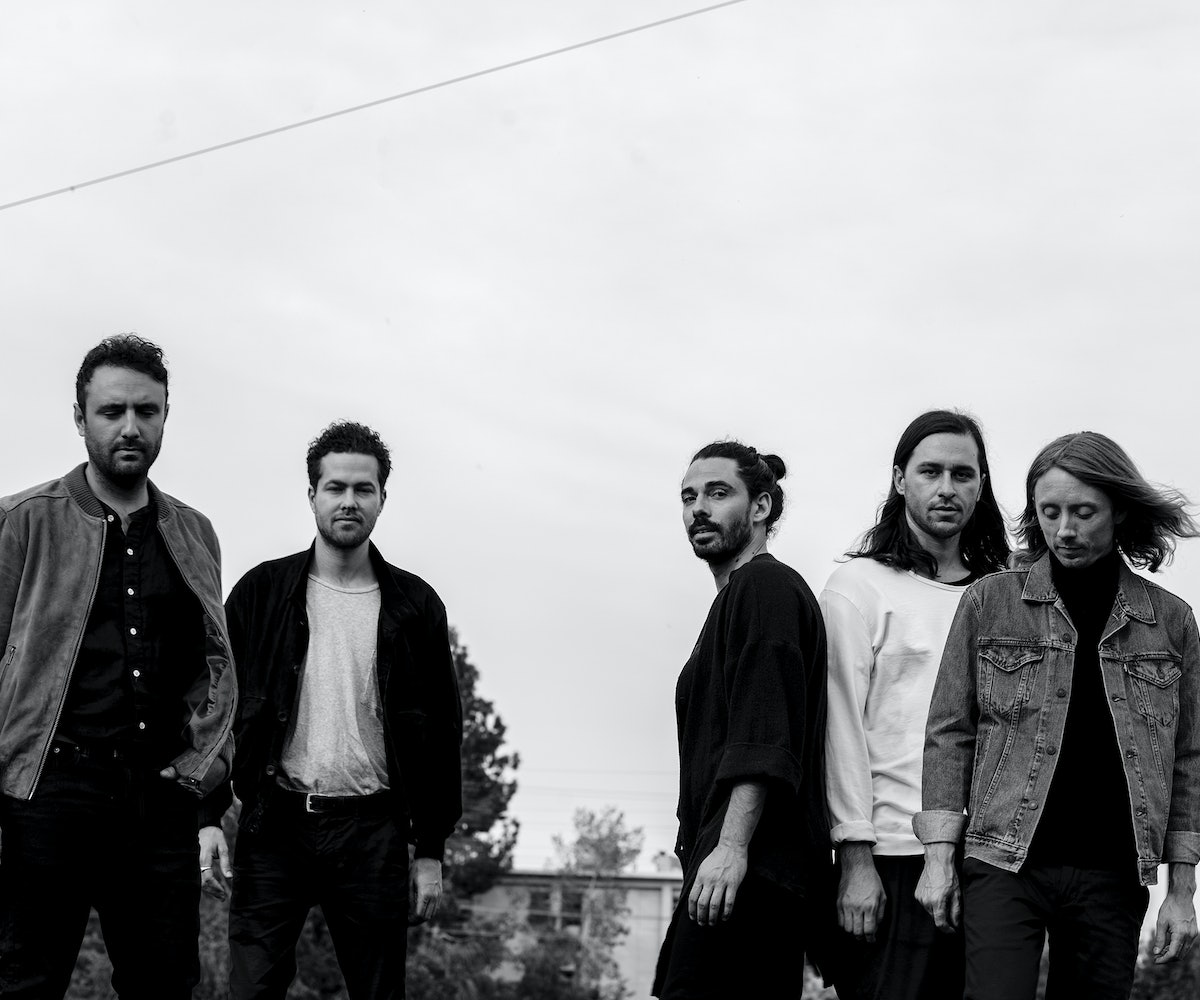 Throughout the course of your life, a smorgasbord of musicians will touch your soul. If Local Natives happens to be one of them, consider yourself lucky. The Los Angeles-based indie band broke out in 2010 with their self-released debut album, Gorilla Manor, and continues to make music that has a way of speaking to you on a spiritual level.

Local Natives has been together for what feels like forever—Taylor Rice and Ryan Hahn bonded over guitars in middle school, and eventually recruited Kelcey Ayer into their creative circle at Tesoro High School. But before the three of them met, they were all infected with the music bug. Rice vividly remembers driving around with his dad in their old Volvo Sedan and listening to The Beach Boys; Hahn recalls playing tapes on family road trips and being obsessed with "Will You Be There" by Michael Jackson from the Free Willy soundtrack; Ayer grew up in an acoustic guitar-filled household in which his dad sang to him and his siblings as they fell asleep and woke up. All of these environments fostered their individual interests in music at an early age, and their passion for it just continues to grow with the band's success.

With a title like Sunlit Youth and tracks named "Past Lives" and "Fountain of Youth," it's easy to spot the theme revolving around youth. Of course, there's more to the concept than that, though. Ayer explained that the title essentially came from conversations between the members about getting older and looking back toward their youth in a nostalgic way. Throughout the album, Local Natives touch on the reality of dealing with becoming an adult in the world as it is at this current time.

Sunlit Youth just embodied the feeling we had while making this record, which was to connect with that more hopeful optimism—and, in some ways, idealism—you have when you are younger. But it’s in this newer context of being adults and having the realization, "This is our world that we get to make, and we get to be in charge of." We have decisions we have to make, and we can actually change our world in certain ways.

Ayer echoed this idea but emphasized the power that younger generations have to influence society. As he transitions into his thirties, Ayer has come to realize that people are often the most progressive when they are younger. "With the current climate of everything that’s going on, it kind of dawned on us how everything changes with younger people," he says. "Everything changes with these people that are born without all of the preconceived notions of what life should be and what it’s supposed to be."

At the core of Sunlit Youth is the ethos of what went into making this record. Songwriters, Ayer, Rice, and Hahn made an effort to break away from the rules that they usually follow in their recording process and instead chased after the things that inspired them in the moment. In the end, they have come out of this process feeling liberated. This spirit is fully represented in the cover art for Sunlit Youth, an image of the band dancing to Daft Punk and the Bee Gees, which was photographed by visual artist Brian Roettinger. For Hahn, the album title represents how all things can be made new in all contexts of life.

"On a personal level, it makes me think about where we’ve come from and our story as a band. These past few years, we’ve come out on the other side of really dark times feeling new again," he said. "The world is not static."

There's a line in the chorus of "Fountain of Youth" where the band shouts, "We can do whatever we want/ We can say whatever we mean." This, in a nutshell, defines the band's process of putting this album together. In addition to recording all over the world from Thailand and Malaysia to Nicaragua and Hawaii, they managed to redefine what is typically categorized as a Local Natives song and change the formula of their sound—there's the Black Messiah era, D'Angelo-inspired "Coins," the female vocalist-accompanied "Dark Days," and the intentionally guitar-absent "Villainy."

"For this new record, we were able to have each of us, a bunch of different ideas, and then we’d show it to the guys, and we’d just work on whatever got us the most excited," says Hahn.

There are pieces of everyone sprinkled into this album. In the song "Masters," the line "Unafraid to call yourself a feminist" directly refers to a personal transformation that Rice went through over the years.

"I think the issue of gender inequality came a little more forefront in my life, and has become something I’m acutely aware of and passionate about," he says. "There are a couple key moments in my life that led to that, but I remember having that moment where saying, 'I’m a feminist' could have all these connotations with it that I don’t necessarily want to take on and I don’t need to embrace that term." Eventually, Rice turned a corner and realized that being a feminist meant that he was "someone who wants both sexes to be treated equally."

Ayer described how, over time, the band has sort of experienced an awakening in regards to political awareness and confronting various injustices that are happening around the world. In a way, this album provides a hopeful outlook on some of those matters without weighing too heavy on the heart, as seen on Hummingbird. For instance, "Mother Emanuel" was Hahn's initial response to the 2012 shooting at Sandy Hook Elementary School in Newtown, Connecticut, and the Charleston Emanuel Church shooting in South Carolina in 2015. The song captures the feeling of helplessness and not being able to process how such unimaginable events can occur.

"I always look to music to find comfort when I am upset, as something to take me to a place where I can heal, and I think we wanted to do that with this record. To have that mature version of us as younger people," says Ayer. He adds:

I feel like if we don’t think about it, and if we ignore it, it’s just going to keep happening over and over again. The way that activism works is that the fight is never over, we’re never done fighting so we might as well enjoy ourselves while we are fighting. And I think we can. It’s not living if we can’t enjoy our lives because there’s so much beauty, there’s so many amazing things that make life worth living. You need to have them, still.

Sunlit Youth isn't necessarily a departure from Hummingbird, but the temperature of it isn't nearly as cold. Rice described their last record released in 2013 as "cathartic," because everyone in the band was dealing with dark times in their personal lives, like deaths in the family among other hardships. During that period, it was easy to sense their desperation to get all of that energy out of their systems; Rice says, "We had to wrench [the songs] out of ourselves." Now, the band is in a different place that has brought them back home where everything is brighter.

Given all that Local Natives has been through, I wanted to ask them what piece of advice they would give to their younger selves. It fell back on one major note: trust.

"So much of where my mind has been at over the making of this records—the last two years—the mantra has been about following your intuition and the spark inside of you that’s telling you where to go," says Rice. He continues:

I think I’ve had a tendency—and still do—where I’ll struggle to really, severely overthink every decision in my life. I’m a really analytical person. I boil everything down to a cerebral decision, and I think that there’s really something to become informed and trust yourself that you’re going to make the decision that’s right for you. It feels like that that’s the path I’ve been chasing for the past couple of years. I think maybe I would share that with myself. I put myself through a lot of turmoil in the past over that.

Ayer is a firm believer in things happening for a reason, so he doesn't have any regrets per se. He says:

I would tell myself to trust my instincts more. I think that there are going to be a million people telling you what the right thing to do is and what the wrong thing to do is, that you’re doing something wrong, that there’s no way you can do this or that. I think that the only thing that makes sense, or that makes you truly happy, is to follow your inner self, and to go for what makes you happy. It’s hard to explain to people from an artistic standpoint, or as a creative person to explain yourself. And it’s often because you’re trying to explain the unexplainable. And there’s no way you’re going to be able to do that, to satisfy everyone. So do your thing, do what you want to do, and trust yourself.

On reaching this milestone in their lifetime and this point in their careers, Ayer thought that they would always get there eventually, though.

"I had no idea what it would look like, but I knew I would figure it out, and I knew I would do something. I guess I was conveniently naive... Maybe there’s something to not freaking out, putting your head down, and just trying to do something that you really believe in," he said. "I can’t really say why this happened, but I just feel lucky that I met Taylor and Ryan back in high school, and then Matt and Nick, who joined a little later. We all had the same basic mentality of how a band should work, and how we like to work together. It’s just luck and hard work is what they always say, right?"

To say that my life has changed since I started listening to Local Natives is not an overstatement. It's been equivalent to discovering my own personal source of light in a world that is constantly filled with darkness. Persian poet Hafez wrote, "I wish I could show you when you are lonely or in darkness the astonishing light of your own being." For me, this sentiment is what

is all about. Trying to process all of the chaos going on around you can be a heavy burden on the mind, but there's also so much beauty worth noticing too. This album is uplifting and makes you feel hopeful about navigating through these complexities.