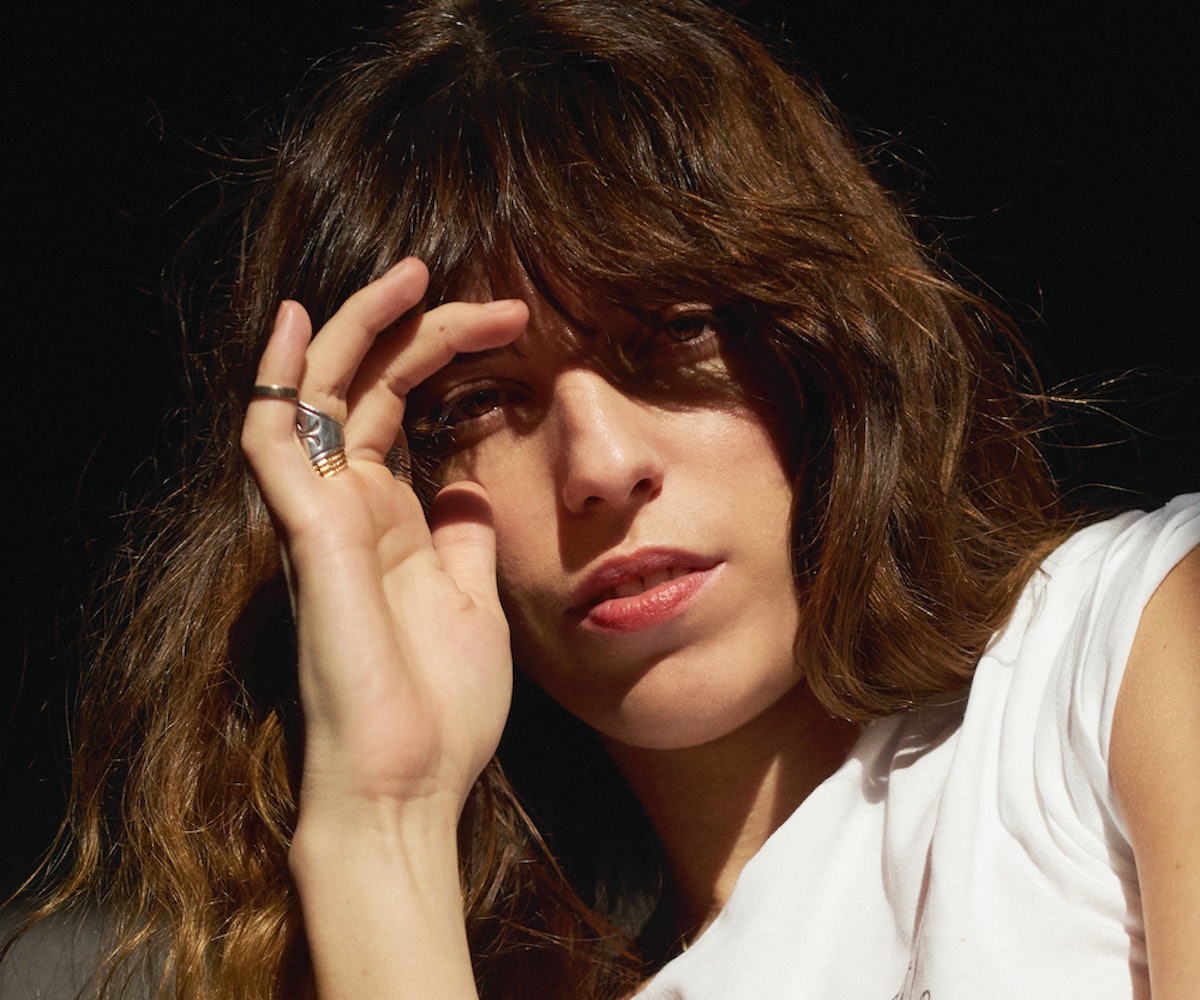 Lou Doillon uses the word “crooked” a lot. She embraces jagged features, be they physical or musical. She herself is leggy and toothy. Her bangs meet her eyelashes. She wears almost as many rings as she has fingers. A scrawled tattoo, MARLOWE, is visible on her inner forearm; it’s the name of her teenage son, to whom she gave birth to when she was just a teenager herself at age 19.

She shows up to her Paris photo shoot with, instead of a stylist, a small Tracey Emin for Longchamp suitcase packed with a leopard-print coat and patent leather high-heeled boots. Though she’s stretched her reputation successfully into the music world, her insouciant style is a signature. “That expression ‘dressed to impress’ freaks the living shit out of me. It’s a terrible, dominant feeling to want to impress,” she says. “Dress to move people, dress to have fun, dress to make people giggle—do whatever you want—but to impress? I’m really not sure,” she cautions. “And musically, it’s the same thing.”

For the daughter of British icon Jane Birkin and French director Jacques Doillon, “impressing” is something the 33-year-old does whether she means to or not, merely by virtue of her famous parentage. “It’s a family that’s always had to deal with what people felt about us—who’s ‘making it,’ or the most beautiful, or the most wealthy,” says Doillon of her relatives, who, in addition to her legendary mom, include her half-sister Charlotte Gainsbourg and her mom’s now-deceased ex Serge Gainsbourg. After working on her father’s films and modeling intermittently, Doillon tried to truly step out on her own. Her first independent project was the album Places, released in 2012. Overseen by family friend Etienne Daho, an iconic figure on the French music scene, the album brought her smoky vocals and pared-down lyrics into the spotlight, and it won accolades and went platinum in France.

Doillon started writing her follow-up, Lay Low, during the tour for Places. While searching for new collaborators, Doillon was listening to Timber Timbre on repeat and decided to contact Taylor Kirk, the musician behind the group’s gorgeously dusky, unnerving sound. At first, he wasn’t interested. “I had to negotiate, which I always love,” says Doillon mischievously. He finally scheduled some time to work with her between Christmas and New Year’s Day (“a bit of a fuck you,” she jokes), and she seized the opportunity, jumping on the first plane to Montreal. “We liked each other very quickly,” says Doillon, and the two developed a teasing, sibling-like relationship. “We had weird things in common: He studied movies, and has something very cinematographic about arranging music,” she says. “We both love a feeling more than something precise.”

They collaborated at Hotel2Tango, a studio that belongs to an assortment of Canadian musicians including members of Godspeed You! Black Emperor. Working with old amps and playing instruments that she hadn’t quite mastered imbued the sound with flaws, which Doillon left uncorrected. “I wanted to capture the fact that we’re crooked and things go wrong. Trying to make it sound perfect is what a lot of people in this business want,” she remarks. “But if it was polished by the end, it was missing out on something.” The result is marked by Timber Timbre’s unmistakable influence. It is spare and moody, from the husky, melancholic opener, “Left Behind,” to the slinky and prowling titular “Lay Low.”

“The only interesting thing about an artist is their courage,” muses Doillon. “We all have trouble dealing with who we are. Maybe the only reason to pay 20 dollars is to see someone onstage who has accepted who they are. I think that is the most endearing thing on the planet. It’s that moment of release.” This attitude guides her own onstage presence. “Music saves me—there’s something nurse-like,” she says. “Putting neuroses in a song is my way of breathing, rather than downing a bottle of vodka or smoking everyone’s cigarettes. I have to get it out because I’m a very panicky person, but I don’t want to be ‘reassured.’ Music has given me a roundness, has calmed me down.”

Her work as a performer, moreover, has finally allowed her to be embraced on her native terrain. “What I love is that it’s a country obsessed by lyricists and auteurs and composers,” she says. “Singularity is the most important thing in France—we’re not too much about dexterity. I mean, Patti Smith has a greater career in France than in America or England.”

Though the November 13 terrorist attacks tried to devastate day-to-day Parisian life, Doillon felt strengthened in the aftermath. She was playing a show the night of the attacks, and canceled her concert scheduled for the following day, but resumed performing shortly afterward. “It was important not to cancel; we needed to be together,” she said. “One night, I asked people to make some noise. We had done a week of moments of silence, and in the name of releasing whatever we had in us, we had two and a half minutes of people screaming and banging on their bodies. It was one of the most beautiful moments. That’s what music is all about.”

Though warmly received for her tunes, a backlash brewed last July when she criticized Beyoncé and Nicki Minaj as damaging to feminism with their sexualized public images. Doillon was chastised for calling out only pop stars of color, along with the fact that she herself has posed nude for ad campaigns and covered a 2008 issue of the (now-defunct) French Playboy. However, she doesn’t wish to address or clarify her comments, only to add, “I feel sexuality has very little to do with music. Music doesn’t have to go through scandal to sell.”

Doillon prefers a multidisciplinar-ian approach to art. In addition to recording and performing music, she reads, draws in her Moleskine at cafés, and cooks for her friends. She’s still modeling (most recently in a Juergen Teller-shot campaign for the high-end Russian department store TSUM), and her drawings will appear on ceramic pieces for the French housewares brand Astier de Villatte this year.

Multitasking prevents her from becoming bored. As a little girl, Doillon had dreams of becoming a geisha, “because they had to master every art—how to sing and make floral arrangements and know literature and make tea.” It’s an aspirational outlook for her to this day. “I want to learn as much as I can,” she says. “Why would you be doing these jobs if it’s not to play?”