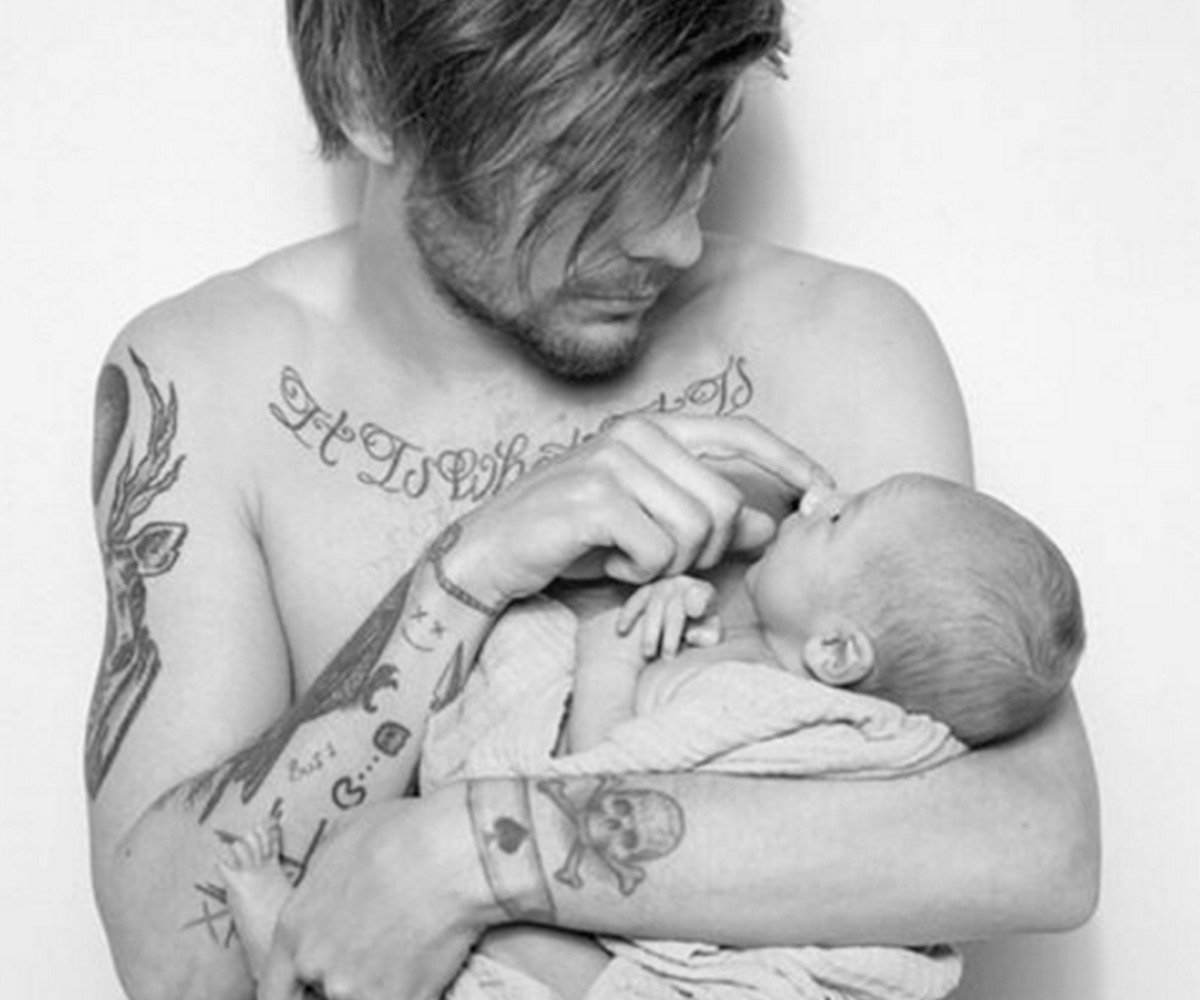 In late January, One Direction member Louis Tomlinson and Briana Jungwirth announced the birth of their son Freddie—or so it seems. After what must have been hours of digging, researching, and photo deconstructing and reconstructing, one of the most elaborate celebrity conspiracy theories has posited that the child is not real at all, but rather a ploy created by One Direction’s management to distract from a Harry Styles/Louis Tomlinson romance.

And this conspiracy theory, like many of its same nature, is one hell of a wild ride. Here’s what it proposes:

The conspiracy begins back in 2015, when a Twitter account called “Briana Facts” was created on May 12—two days before Tomlinson and Jungwirth were first photographed together. Jungwirth’s pregnancy was then confirmed two months after they first ran into the paparazzi, which also caused some fans to scratch their heads, as celebrities usually wait at least 12 weeks to divulge their pregnancy.

And so Jungwirth stayed out of the spotlight and Tomlinson continued on with the band, vowing to be a “hands-on dad” when the child arrived. But once the birth happened, fans grew suspicious again.

When a friend of the mother posted a photo of Jungwirth in the hospital ready to give birth, many were struck with how similar the photo was to that of New York-based blogger Amber Fillerup Clark.

This, as it happens, lead to an entire questioning of Jungwirth’s identity, as fans compared her to several other bloggers, YouTubers, and, well, humans that simply looked like her. Then, once Jungwirth left the hospital, fans also questioned why she was not released in a wheelchair, like all other women who had just given birth.

But the greatest controversy of all came when Tomlinson himself posted a photo of him with his child, leading fans into a frenzy of photo-editing accusations that, if anything, show that there are some 1D fans out there who should really consider a career in criminology.

Photo-analysis of tattoos, photo layers, and just about every other aspect of the images also happened with every other photo Tomlinson uploaded with the child, leading some fans to even believe that it is not Tomlinson in all the photos himself, but rather actor Horacio Pancheri.

And last but not least, the cherry on top of all the controversy? The positioning of the hands, feet, and eyes of the baby in all the photos have some suggesting that it is not a baby, but in fact a realistic doll.

So, is this controversy real? Is it the plot of an upcoming Dan Brown novel? Is the answer written somewhere on the Declaration of Independence? Is Zayn in on the truth?

Well, Briana Jungwirth has something to say. She commented on an Instagram by MTV, chastising everyone for questioning the existence of her child with the pop star. "Sorry but that is cruel," she wrote. "I don't usually speak out much, but I'd like to know how would you feel as a new proud mother reading something like this? How dare anyone call my child fake. That's sick and morally wrong. Say all you'd like but I won't let anyone take away the happiness I have for my baby son. I know won't either."

Tomlinson’s sister has also posted an Instagram with the child, and Tomlinson himself uploaded another image, this time of the child with his eyes open.

So, it would seem that it is time to lay this conspiracy to rest. There is a baby out there, and it appears to not be a doll. Good work, 1D detectives, but it is time to reign this case in. Sorry, Larry shippers.