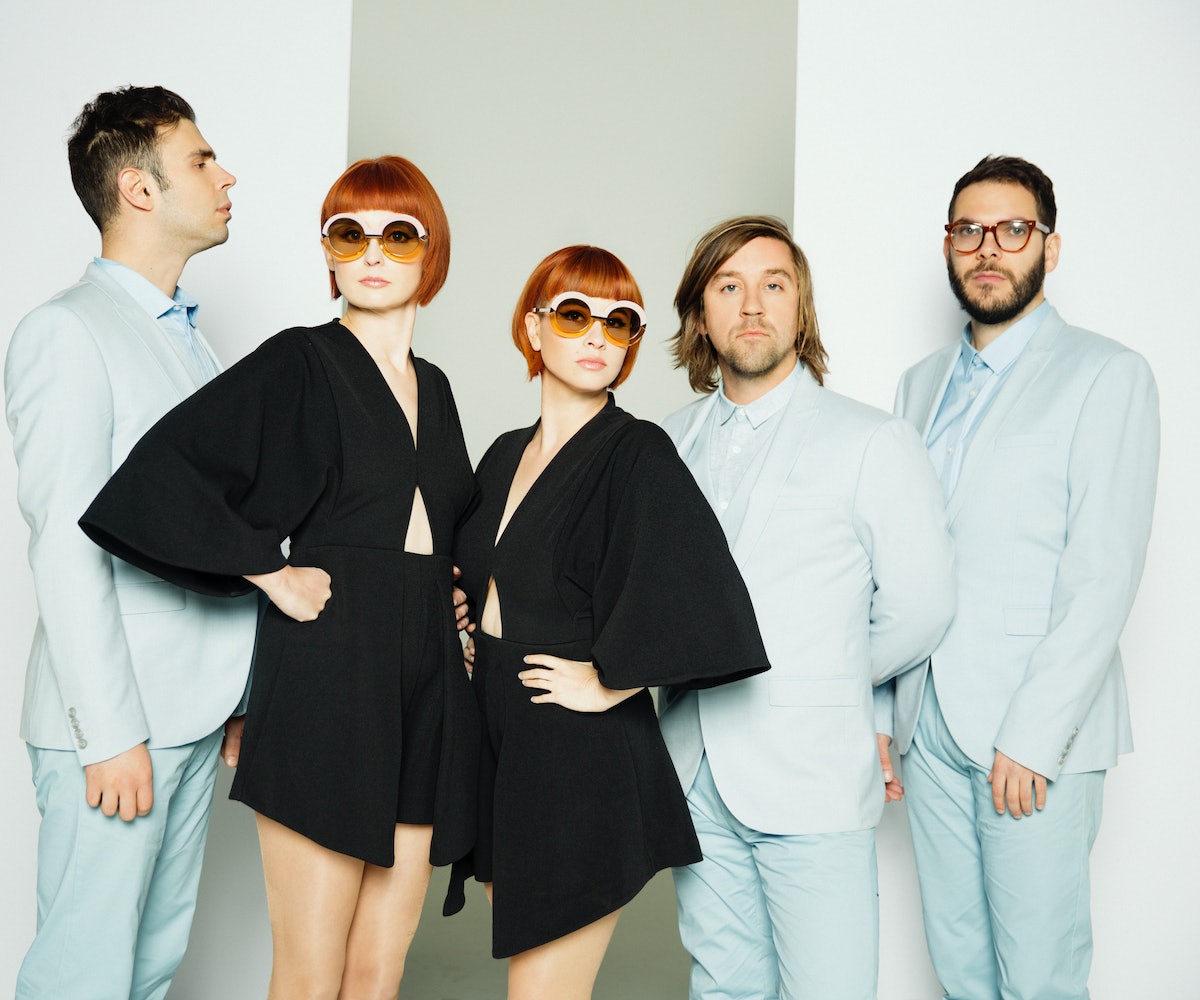 Lucius is one of those bands that move from unknown to ubiquitous without much fanfare. Despite their lack of Twitter meltdowns, late-night TV appearances, and big-name cosigns (well, unless you count economist Paul Krugman), the Brooklyn-based five-piece has spent the last two and a half years getting under the American public’s skin. After releasing their debut album in 2013, they toured nonstop, bringing their idiosyncratic live show to concert halls big and small across the country. After a short songwriting break, the band is preparing to release Good Grief, an emotive refining of their hyperactive sound that deftly avoids the notorious sophomore slump. We caught up with vocalists Jess Wolfe and Holly Laessig to discuss the new record and what they’ve learned from two years on tour.

Jess Wolfe: It actually has nothing to with Charlie Brown. When we thought of the title, it totally slipped my mind. We were trying to come up with a phrase that would grab the darkness and the light at the same time. It was sort about embracing grief but also making fun of ourselves and finding comic relief in the heavy subject matter we were writing about, showing that the good comes from hard times.

What kind of hard times did you experience since you released your debut?

Holly Laessig: For the first record, we toured very extensively for two years. We were away from our families, all in a little van together driving through the night to make it to the next venue, doing radio, a show, then doing it all over again. When you wake up you don’t know where you are, relationships are failing: it’s hard.

What was the most unexpected part of life on tour?

JW: How many places you can possibly go and not be able to see much of anything. We spent so much time in a car. I think we were home for three weeks in 2014 total. There were so many places we got to visit that we wanted to visit for so long, but you’re at the venue, you load in, sound check, play your show, say hi to the people who come see you, then go to sleep, and do it over again. I wouldn’t take it back, but it was incredibly laborious. I’m looking forward to visiting a lot of these towns again and seeing them properly. We also got to sing with so many of our heroes, from Roger Waters to Mavis Staples to Brian Wilson to Jeff Tweedy. For me, it was so interesting how artists from so many different worlds embraced us.

All the proceeds of your Northwestern tour went to local charities. How did you as a band decide on doing that?

JW: We had been touring for so long and we wanted to make a difference in people’s lives. All these people are spending money to come see you, and you’re visiting all these different towns and get to hear so many stories, and it really affected us. We wanted to be active members of these communities, not just through art but also finding a way to give back beyond performing. We decided that we would find local nonprofits in a bunch of different cities, and in the daytime go visit those charities. We sang for an Alzheimer’s home and got to talk to all these patients; we went to a community center and painted the walls; we played with puppies at a shelter in Portland. We raised $35,000 for these different charities in just five or six shows.

Were any of the songs off Good Grief born on tour or was there simply no time to write with everything else you were doing?

JW: We were collecting ideas and feelings while we were on the road, but there really wasn’t any time to be sitting and making. We had to set aside a good three months to write, but we had collected voice memos on the road so we had a sort of treasure chest to open up.

Lyrically, it seems like even upbeat songs like “Born Again Teen” have a darker edge, with lyrics like “I could just die.” Does that characterize the "Good" and "Grief" elements of the title?

HL: “I could just die” actually goes back to that feeling of first love and being young. It’s a hyperdramatic moment, because teenagers are hyperdramatic, and so are we. That was one of the one of the ones supposed to be relieving us of the darkness on the rest of the songs. It’s the one joyful tune and of course, the label wanted to run with that one [first]. We were just like, “I hope people are going to be okay with what follows next.” “Something About You” was another "Good" and our next song coming out is another "Grief," then the rest of the songs are pretty much all "Grief." It doesn’t always feel like grief when you’re listening to it, it’s just the lyrical content.

JW: We were in an interview, and this guy was like, “I listened to the record, and forgive me if I’m incorrect, but is this about women who just don’t want to be happy.” We were cracking up, and he couldn’t have been more serious. It was mildly offensive but it was so funny, because no, it’s not about not being happy! It’s about acknowledging difficult moments in your life, and making something powerful and beautiful out of those moments.