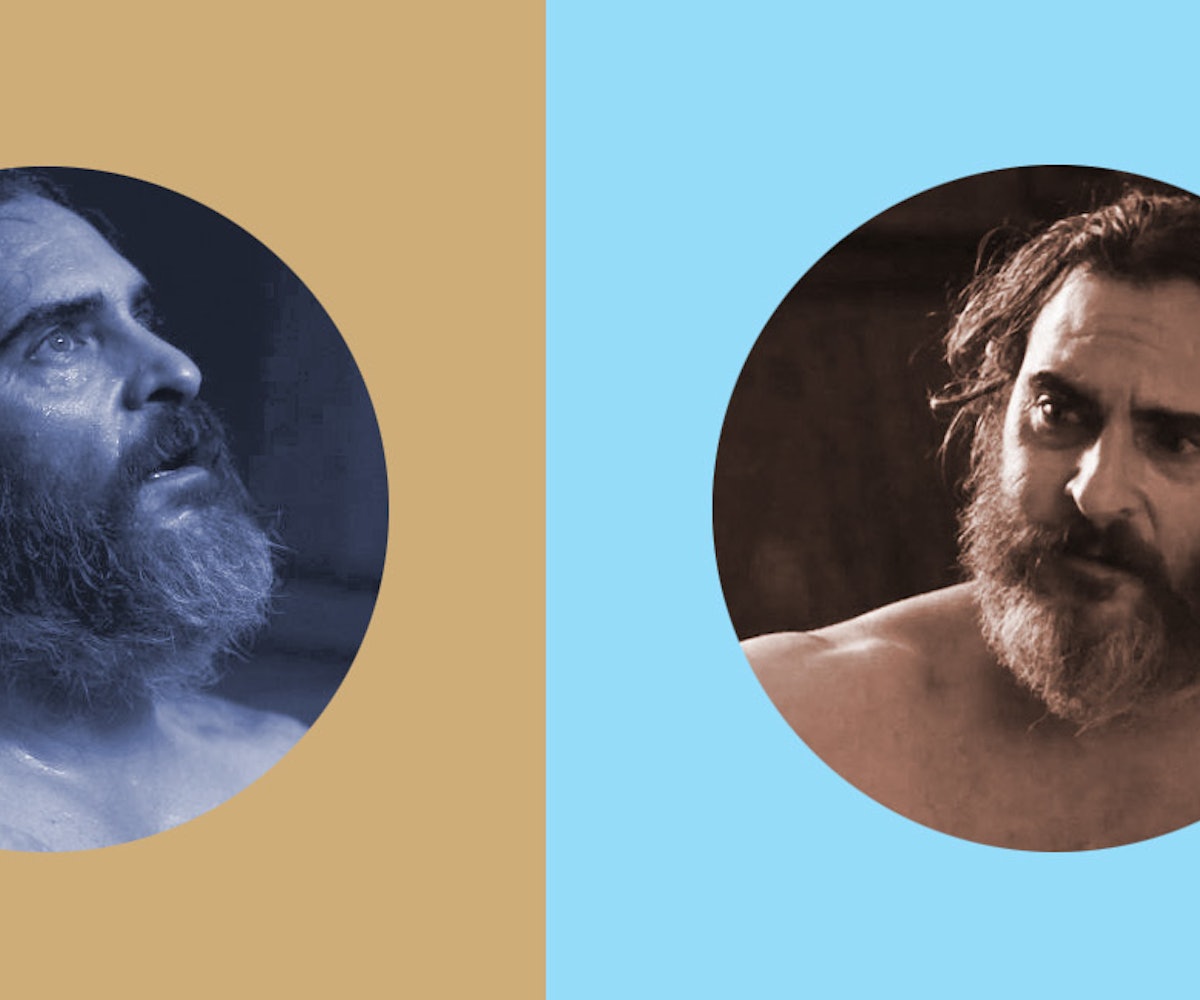 Lynne Ramsay’s film Morvern Callar opens with a stretch of stillness—often augmented by close-ups—wherein the audience comes to realize that Morvern (Samantha Morton) has just discovered the suicide of her boyfriend on Christmas morning. She reads his suicide note (which includes a novel manuscript to be submitted to a publisher—classic male writer!), opens Christmas presents, and doesn’t tell anyone about his fate. It’s a transfixing little sequence of a movie’s pieces coming together, and there are echoes of it in You Were Never Really Here, Ramsay’s new film starring Joaquin Phoenix. With even more close-ups in its opening moments, Ramsay slowly assembles the aftermath of violence. Phoenix burns a photo, cleans the blood off of a ball-peen hammer, and takes down a crinkled Do Not Disturb sign that tells you everything you need to know about the functional crumminess of his temporary digs. How his fleeting self-suffocation via plastic bag fits into the picture is not immediately clear.

More clear is the gradual revelation that Phoenix’s character, named Joe, is some kind of shady fixer—a scarred and lumbering force of nature, apparently specializing in some kind of people-retrieving tasks. We see bits and pieces of a recent job, and more of another one, where he’s hired to find the young daughter of a senator, who has run away and may have been nabbed by some very bad people. In some ways, You Were Never Really Here is essentially an artier version of something like Taken; its brutal violence is often technically elided but visibly messy, in contrast to the relatively bloodless combat of the Liam Neeson series. Phoenix brings a clear sense of pain, physical and otherwise, to the part, and fumbling tenderness in scenes with his elderly mother. But the movie isn’t shy about channeling that energy into the plot of a violent thriller.

You Were Never Really Here is only Ramsay’s fourth feature (Morvern Callar, now 16 years old, was her second). It isn’t her first foray into genre territory, either, though it feels more upfront about it than its predecessor. At the time of its release, 2011’s We Need to Talk About Kevin (like Morvern and Here, an adaptation of a novel) was acclaimed for Tilda Swinton’s typically terrific performance as a mother unequipped to deal with her monster of a son, and for the movie’s confrontations of difficult truths about motherhood. Both of these things are in the movie. Swinton, for the entire running time; the difficult truths about motherhood, for about 15 minutes. While its early minutes are bracing, including an indelible shot of Swinton standing in the thick of deafening construction noise to drown out the endless cries of her infant son, We Need to Talk About Kevin is basically a bad seed horror movie gussied up with red filters and overtures toward seriousness.

But the movie, particularly in its scenes set in the aftermath of a devastating event (withheld until the end, naturally), indulges in more grotesque caricatures than most proper horror movies would dare. It imagines that no one watching would understand Swinton’s alienation without portraying her purgatory-like existence through a soul-crushing job at an anachronistically ’80s-looking travel agency. Kevin starts off by showing real anguish not many people talk about, but quickly becomes a movie showcasing behavior that feels increasingly alien. There’s an air of queasy exploitation as the movie builds to its horrific climax, an unearned (and largely unexplored, unless the red filters count) wallow in unimaginable horror.

Ramsay’s craft is often impeccable, and You Were Never Really Here showcases it without as many distractions—or rather, with the exploitation up front, seemingly less convinced that it’s confronting something important. That’s not to say Here is a lark, even a nasty one. But it’s hypnotic where Kevin remained repetitive and even reductive. The aftermath, or series of aftermaths, it deals with here is more immediate—violence often happens just offscreen, before the movie lingers on the gruesome results—and Ramsay does a brilliant job of placing the audience in Joe’s headspace, inscrutable as it sometimes is. She melds physical and psychological pain with such acuity that her bloody righteous-rescue movie sometimes appears to be deconstructing itself, piece by piece, before our eyes.

Arresting as her technique can be and compelling as Phoenix is, this still happens at something of a stylish remove. As with We Need to Talk About Kevin, Ramsay has made a maximalist movie disguised as minimalism, and Here has some flourishes like something out of a show-offy music video. Maybe for some viewers, a one-off shot of Phoenix casually tearing a single page out of a book he appears to be reading holds life-giving mystery, or even a crucial key to the movie’s whole deal. To me, it looks more like ostentatiously weird behavior. Weird things happen in Morvern Callar, too, but its mysteries feel more human. Here keeps offering elliptical bits of Joe’s past, seeming to withhold for the arty sake of it. Still, Ramsay is obviously talented. If it’s hard to tell whether You Were Never Really Here is a full-on deconstruction of a thriller or just evidence of her inability to allow any pleasure into her experiments with genre, maybe there’s another kind of thrill in not knowing.