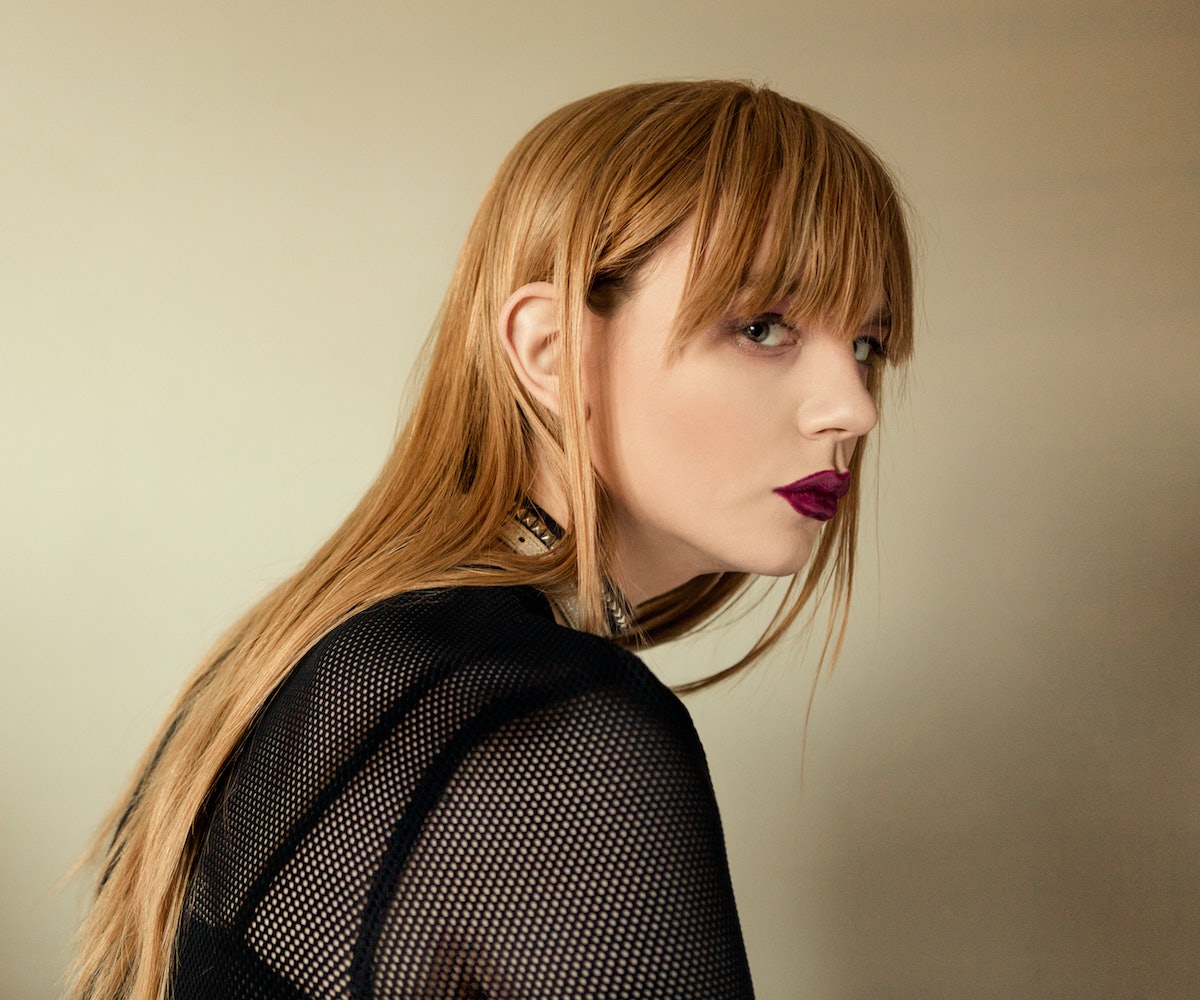 If you love a woman who favors warehouse raves over fashion shows, Macy Rodman's your girl. Over the past four years, the trans icon has made a name for herself in Brooklyn’s underground queer scene, first at her weekly “drag show for fuckups” Bathsalts, then with her bubblegum pop-punk music career. Now, she’s releasing her first EP, named HELP.

“At the time I was writing most of the songs, I realized that I was at this point in my life where I had to look for answers and reach out to others if I was gonna move forward,” Rodman says. “My health, my safety, my love life, my friendships, my career were all things that I needed to talk about with other people and take real action towards making changes within. It's a little cryptic, but for me it meant reaching out at these critical life moments and not feeling ashamed to do that.”

Reaching out for help might be a foreign concept for most mainstream rising artists, but it's a reality for most in the insular queer-art community. At Bathsalts, which finished its three-year run last summer, performers wore shoes they received as hand-me-downs from friends and spruced up with duct tape, ran sound off of each other’s iPhones, and lamented about their shitty day jobs over free whiskey gingers. While Rodman has always been a DIY artist at heart, writing all her songs, recording her own vocals and taking charge of production, for HELP, she brought in JX Cannon as a co-producer.

“Stressing out when I start the day, gotta pop a fucking Xannie just to make some eggs,” Rodman whines on “Lazy Girl,” the EP’s lead single, an ode to sloth in the “Netflix and chill” age. The song, like all of Rodman’s music, has two access points: a generation’s addiction to luxurious apathy—and a trans girl’s experience with depression while on hormone replacement therapy. “You can come and fuck me,” drawls Rodman on the track, “but you gotta shut the door.”

The duality of the song, with its universal message of laziness and personal story of a trans woman dealing with literally rewriting the code of her body, shows just how nuanced Rodman's songwriting is. “‘Lazy Girl’ is such a weird song because it acts like a joke song but also something that’s very personal,” Rodman says. “I definitely have a sense of humor about things in the way I present them.”

She also has a sense of humor about her place in the pop pantheon, calling her image and music “trans pop Courtney Love.”

“Whenever I approach making music, my goal and gut instinct is to just be Rihanna...but that’s not a possibility for me, with what I can deliver with my voice, with my actual sensibilities when I start writing music, that’s just not gonna come out,” says Rodman. “People have told me that my performance style is punk, and that was never really something I consciously tried to inject into my performances. It’s purposefully pop, accidentally with this grunge-pop air about it.

This conflict of presentation and reality is integral to Rodman’s experience as a transgender woman—one who loves pop music but is also uncomfortable with its obsession with only representing and valuing certain bodies. As she says, she's “playing pop." She continues, "I’m never going to be Britney or Rihanna as far as what people can see me as. Even though I love [pop music] and that’s the place that I’m coming from, I feel like I have to acknowledge that that’s not what my music is, even if it’s like, ‘wink wink.’”

All of the songs on HELP deal with concepts and quandaries any millennial can identify with: wanting someone who doesn’t want you back and knowing they’ll hurt you (“DBMH”), leaving a club at 8:00am high as a kite and just wanting to crawl into bed with someone cute (“Drug Night”). There’s even the appropriate dose of sugary nostalgia—a cover of Fleetwood Mac’s “Landslide” that Rodman and Cannon turn into a pleading, pounding club banger. But Rodman takes these concepts, so familiar in the sphere of mainstream pop music, and writes about them through the lens of her life as a trans woman in 2016—not to make her experience universal, but so that other queers can see themselves reflected in it.

HELP’s next single, “Violent Young Men,” furthers this exploration of traditional pop iconography with a music video set up as a classic home invasion horror movie. “Three girls are having a sleepover and get attacked by a male intruder. The video is very much classic pop imagery—horror movies are a national obsession, and especially the 80s and 90s horror movies that this one is referencing.” It’s another example of Rodman finding a more universal access point to something so personal. “I wrote the song after I’d gotten harassed and assaulted a few times, and also was hearing so much about police brutality,” she explains. “There’s so much violence in the nation right now coming from everywhere that I got really frustrated, and that’s probably the angriest, Country Love-iest song on the EP.” Certainly “Violent Young Men”, with its horror movie shrieks and Nirvana sample, is throbbing with the aggression of queer people everywhere, who live their lives marginalized and brutalized. Rodman’s irreverent pop take is a way to process this pain and imagine a world where queer bodies are valued.

“I want trans women to feel empowered, and my way of doing that is to allow trans women to see themselves in these pop images, and that’s a good way to do it because it’s almost subliminal,” Rodman says. If the world won’t make you a pop star, you’ll have to tell them you already are one, and wait for them to catch up.

Stream the album below.