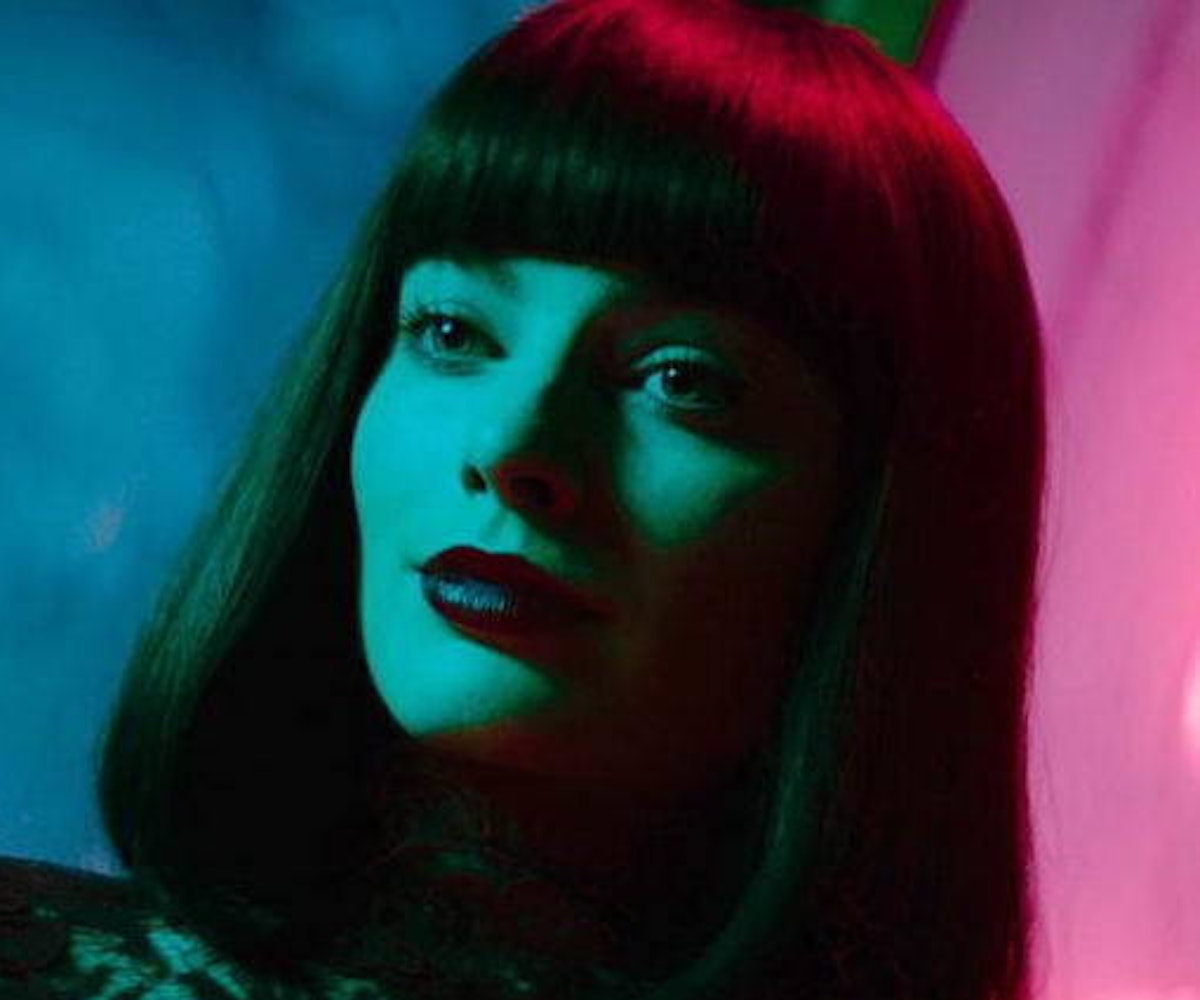 I’ve never really conducted an interview underneath a table before, but the fire alarm has gone off in the NYLON office—right as Margot Robbie and I finish exchanging pleasantries over the phone. At first, I ignore it. After all, I've managed to squeeze myself into her packed press schedule, and I'd be damned if I didn't at least get something. Robbie, however, is (rightfully) concerned. “Are you sure you don’t need to go?” she asks, a genuine hint of alarm coloring her warm voice, “It sounds like it’s getting serious.”

“It's fine. I really think it's okay,” I say. “If people start running—if it gets really dark—I’ll go.” There's a pause before Robbie laughs nervously. “Dark," she repeats. "How very fitting. For the movie, that is.”

Granted, Robbie is 3,000 miles away, and the only real danger she’s in is maybe timing out of the escape room that’s been set up to promote her new neo-noir thriller, Terminal. But I’m determined to keep my cool. After all, Robbie—in her portrayal of myriad complex onscreen characters, from Tonya Harding to Harley Quinn—is nothing if not cool. And her character in her latest film, Terminal, is no exception. Annie is a one liner-slinging waitress with a lethal alter ego, and in the role, Robbie demurs, coos, and purrs her way into regaining her agency and, in the process, completely flips the script on the reigning power dynamic—blowing away seasoned actors like Simon Pegg and Mike Myers with little more than a calculated quirk of her eyebrow. “Annie is manipulating the men by giving them exactly what they want. She’s very much dressing up and playing into what the male gaze is looking for, initially,” she explains before taking a deep breath. “But, at the end, when it's really her moment... she’s done playing the cat-and-mouse game. She’s in control.”

It makes sense that Robbie could inhabit that part so easily, being that she was the driving force behind Terminal. Not only did she single-handedly carry the film with her remarkable performance, but her creative, slightly twisted touch is all over the production. “All of it was so fun because there weren't any rules to abide by,” you can practically hear her smirk—that Cheshire Cat grin she’s so well known for—over the phone. “We had crazy ideas, so we were like, ‘Let's just do it.’ I mean, fuck it, why not?”

After all, for Robbie, Terminal was a passion project, cobbled together from online mood boards and cult classic references brought to life by a team of passionate friends finally producing their first film together under an official banner: LuckyChap Entertainment.

“We shot it two years ago, so the company was brand-new, so we were all really in it together and just kind of figuring it all out as we went along,” Robbie laughs. “We just set out to do something weird and different, and we picked all the things that make a film not commercially-viable—like having it be very dialogue heavy with neo-noir themes, a very British sense of humor—when all people want is like big action.”

Instead, what we received was Terminal, a gorgeous, neon-drenched film that explores an urban underbelly reminiscent of Frank Miller's Sin City via a plot heavily inspired by themes from Lewis Carroll’s Alice in Wonderland.

“Some say to survive it, you need to be mad as a hatter,” Robbie’s character Annie demurs in reference to the (frankly) fucked-up world she and director-writer Vaughn Stein created. “Which, luckily, I am.” It's a chilling line she takes a moment to recite again over the phone before a maniacal jingle, more fitting for a broken carousel than a conference room, begins playing in the background of wherever Robbie is—causing us both to shriek. I write in my notes, "Creepy AF," adding it to the list of bizarre external circumstances that appear to be haunting our interaction. Below that, I jokingly write, "Margot = Followed By Evil?"

There is still a part of me that wonders how Robbie doesn't let the dark wickedness of some of her best roles get to her in real life. Perhaps there's something to be said about the emotional work it takes to draw a heavy separation between your traumas and the trauma of your characters. That said, compartmentalizing doesn't seem to be a problem for Robbie if the way she speaks about her research process for Annie is any indication.

“It was so crazy. I obviously researched serial killers and psychopaths... but I also wanted to incorporate this childlike playfulness. So I tried to look at everything with that bright-eyed wonder, even though the things that make Annie excited are extremely dark and depraved,” Robbie says excitedly. “But I’ve done a lot of research, and the whole idea of playing dress-up—this is a bit morbid—is related to how childhood trauma affects people. [People who experience childhood trauma] are actually very stunted in their emotional growth. Annie was born out of that idea. She never really grew past that age. She’s playing dress-up.”

However, not everything about making Terminal was all doom and gloom. For Robbie, the best part of the process was the way she was able to get involved with every aspect of the filmmaking process, especially seeing as how this allowed her a level of control typically not afforded to her—despite being one of the most in-demand actors working today. “As an actor, you come in, and you do a bit, but it's really not your project. Whereas with this, we all kind of felt an ownership and a responsibility,” she sighs. “It's satisfying. I'll never forget that moment when we did our last scene of the whole film, and we just all kind of hugged each other and were like, ‘Wow, we did it. We made a movie. We're, like, 25 years old, and we made an actual film. We did it on our own.’”

And now that she’s at the helm of LuckyChap and all its endeavors (including a forthcoming women-focused Shakespeare drama series), it’s also her turn in another sense. As a prominent player in Hollywood, Robbie feels like she can use her (multimillion dollar) platform to bolster other female talent. “We're working with a lot of female writers and a lot of female directors and first-time directors, and in a whole varying range of films,” she says excitedly about LuckyChap. “We've got tiny, indies, some $6 million indies, then we're working on a big sci-fi project—like an $80 million dollar film—but with a lot of incredible female talent.”

That said, she’s careful to emphasize that it’s not a tokenization move, explaining that while “we're working with amazing male filmmakers, the focus is female filmmakers, writers, and directors, and female-driven stories.” She pauses to take a breath. “A big female element is the common denominator with our projects out there... That’s all we want.”