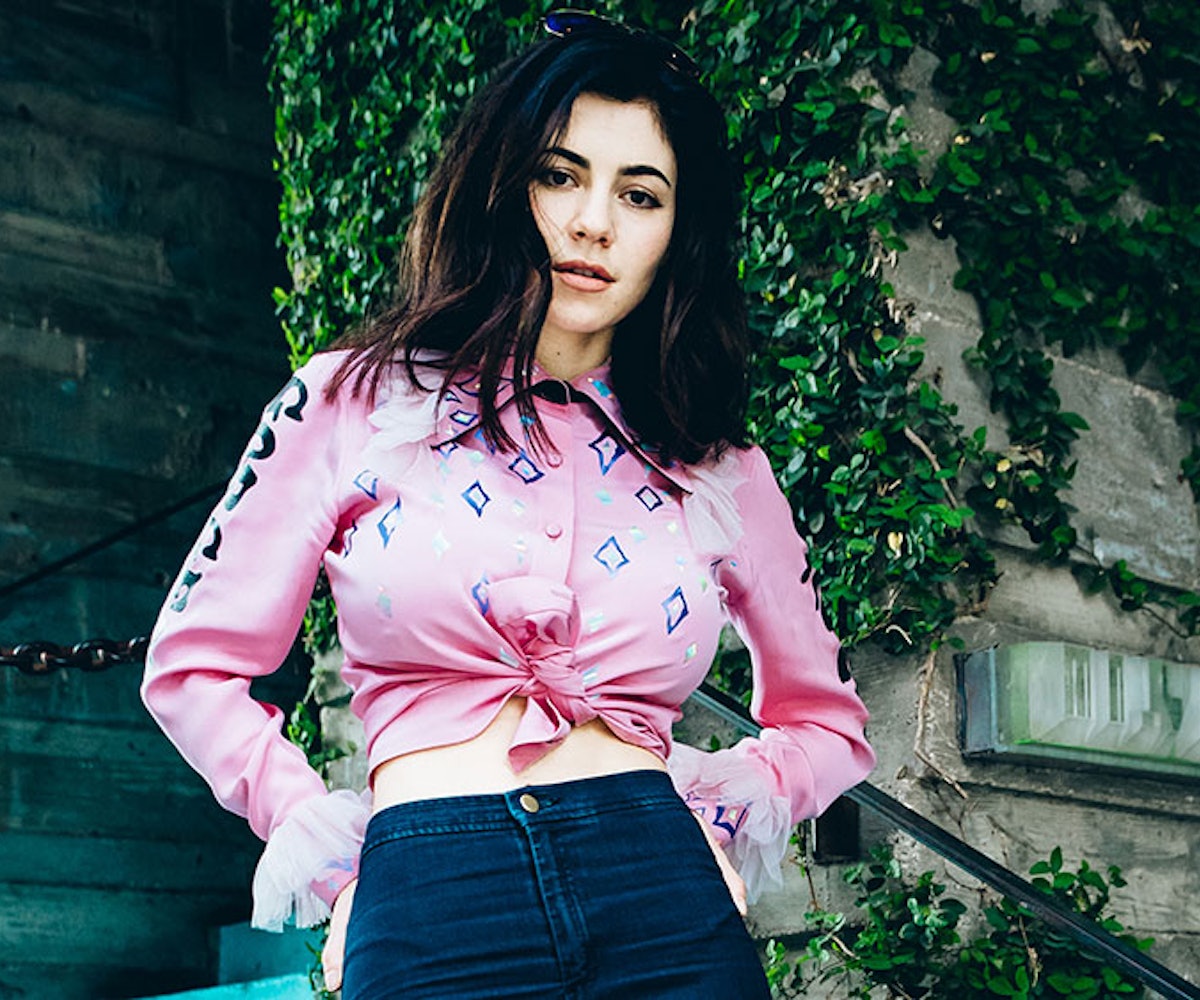 Right off the bat, Marina Diamandis declared that she was not a robot. Her debut album The Family Jewels boasted clever lyrics and waxed poetic on the big ol’ American Dream. She seemed to skirt around the pressures of Hollywood and fame: observing it mechanics, but never submitting to them. Then the anti-pop pop star was born.

Electra Heart, the alter ego and title of her sophomore LP, emerged with cynicism all tied up in a pretty pink bow and a heart painted on her cheek. With songs like “Primadonna,” a radio-friendly track filled with pop production but tongue-in-cheek lyrics, Diamandis stepped away from fame’s periphery and into the spotlight. Only she was the one playing the game — not the other way around.

Now, hot off the heels of her third album FROOT, Diamandis has come into her own. The wigs are off and cheeky pessimism is gone. She’s taking stands not just for herself (“Forget,” “Happy”), but for the world around her (“Savages”). Pressure makes diamonds, and Marina Diamandis is proof of that. An idle teen she is no more.

Click through the gallery to read our SXSW conversation about her Diamonds, real-life savages, and, of course, FROOT.

What's been the biggest surprise since FROOT came out?The biggest surprise is how far I've gotten without radio and media. I haven't one television show. For me, it's less about the album and more about the fans; learning to rely on your fanbase to get somewhere. I'm a bit past charts. It's not like I want to be a Top 40 artist anymore. But, it's still amazing to see presales — like in the U.S. — were incredibly high. I didn't have to compromise anything. I did it how I wanted and it's worked because of the type of fanbase I have.

Are you finding that the more active you are on social media, the less you have to do the traditional promotional tour?Interesting! Kind of. However, if I hadn't done Electra Heart and hadn't had "Primadonna" or "How To Be A Heartbreaker," I wouldn't have as big a fanbase. Once you're in a position with that support, I think you can pick your own way. And, you should be doing that. With artists, there's this whole catch-22 of creating the art you want while not having to compromise anything to get it out. It's very difficult in the beginning.

What did you have to compromise in the beginning?I felt a personal pressure to be commercial and make a certain type of music. For example, with Electra, I wanted to make a contemporary pop album — not because I love, love, loved the genre, but because I knew I couldn't get anywhere in the U.S. on the radio with this sound. I was very much told that by my label. I'm very open about that. I love the songs I made for that, but it was a very conscious decision. And, now I'm like, 'I've done that' and I don't want to do it again. I don't have to.

You take whatever you learned from the last project and apply it to the new one.Totally! Say, for example, I wanted to stay with that sound; it wouldn't make sense to do the Dr. Luke thing as Marina. It wouldn't be good for me.

Songs like "Savages" find you really taking a stance. You weren't going for a feminist angle were you?It's interesting you say that because it's not really gendered. It's more about humanity and what we have to reconcile is what's at the core of all of us; traits that are human that we condemn. So, it's talking about the nature of man and woman, but I supposed because men seem to be more violent, it's directed towards that. It's more sociopolitical than feminist.

What prompted you to write a song like that?Actually, it was a magazine article in the Times about the Boston bombings. The journalist was saying it's so hard to reconcile how one man is running a marathon that saves lives while another is building bombs to destroy them. I wrote that down, and for two or three months didn't really do anything with it. Then I think I started writing the song because I felt so overwhelmed and disturbed by the daily news which was all about gang rapes. Rape was everywhere. And, that's the nature of news: once one story becomes big, the topic finds relevancy and legs. I'm glad people are talking about it. But, that's what I started writing about. For me, I wanted talk about the news. When something bad happens, we obviously want to punish people and condemn it. But, we never really talk about why something like rape is so common. It's something that's been happening since the beginning of time — it's built into to people — that's a difficult pill to swallow. Those are the topics I'm was and still am interested in talking about.

It's such a departure from Electra Heart. Sonically, it blends in with FROOT, but lyrically, it feels like the statement song for the people. "Forget" seems to be a mea culpa.Totally! "Forget" is a lifetime song. It's about recognizing all that you've been through and making a decision to turn a corner.

Do you feel pressured to make a huge feminist statement?Not at all! "Can't Pin Me Down" is pinpointing the frustration you feel when being pigeonholed or like you've already been defined before even opening your mouth. It's about perception. There's a line, "Do you really want me to write a feminist anthem" that's not meant to start a debate about feminism. It's more a declaration of not wanting to be confined to A, B, and C. We are all made of many different colors. We're not black and white. That's particularly true for women. Songs like that are me trying to piss people off. But, no. I don't feel pressured. I am a feminist. I'm a woman and those things are relevant to me.

Moving forward, what's the world you're creating for the tour?Well, I think we're calling it The Neon Nature tour. (That's the concept, at least.) We want to make this very surreal world with a backdrop the audience can live in that blends electrical elements with natural ones. It is very surreal, actually. We have these huge custom-made inflatable fruits that are inverted colors. They're not the natural ones. Think more surreal than kitsch.

What's the biggest misconception about you?It's interesting because I don't think there are as many because of FROOT. Maybe it's good there aren't? I guess I was cast more as a pop star and I don't feel like that. I suppose that's the one thing. It's not a bad thing. I completely get why people might think that. Even with this album, which isn't really pop sounding in the contemporary sense, they're still saying I'm a pop star. I don't mind.

Just do you and go forth. "Froot" definitely has the pop vibe.It does; it's just six minutes long.

What would you say is the most personal song and lyric on the album?Personal song would be either "Solitaire" or "Happy." The lyric would have to be something from "Forget: "I'll put my money where my mouth is for the first time in my life."

After all that you've been through, if you could speak with The Family Jewels Marina, what would you tell her now?I had a lot of anxieties about things. It wouldn't be a musical thing, but I think I would tell myself to go see someone for all of the anxiety. I realized I had quite a problem and it's only now I look back on it and think it wasn't normal. Like, wanting to vomit before you're supposed to go out and meet your friends isn't normal. But, at the time, I thought I was just born like that or that it was common. I probably would've addressed that. It probably would've made things easier. If anxiety is apart of your everyday life, it has an effect on every decision you make and the people you're working with.

There's nothing you would change, though?No! I love Electra and I wouldn't be here without her. I like journeys that are very colorful. I think that's what my path is meant to be.

If you could describe FROOT in one word, what would it be?Juicy.