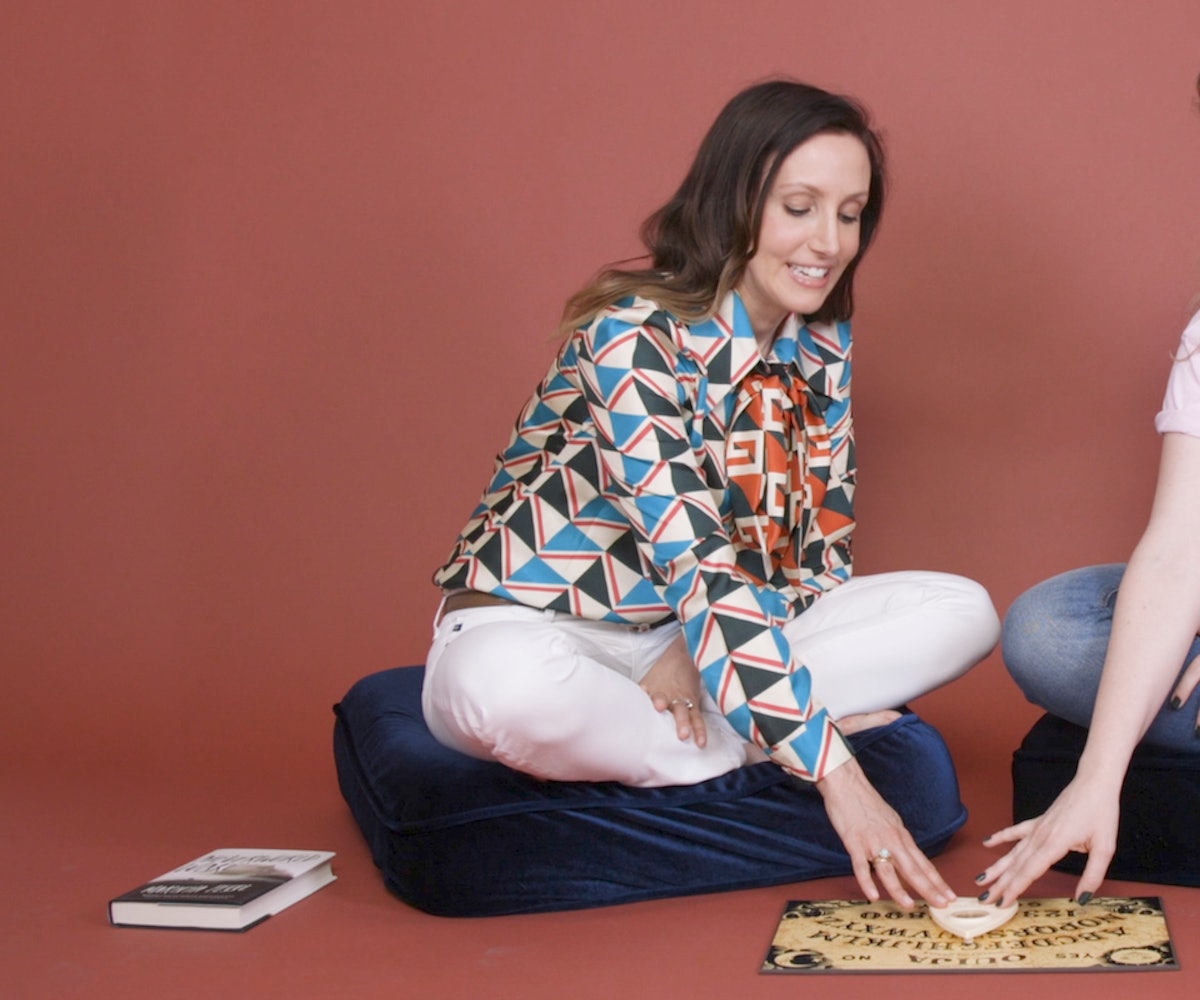 The best trick the devil ever played was making audiences think that classic Bill Murray movie Groundhog Day is a comedy, instead of an existential nightmare. I mean, what's so funny about having all meaning and consequence removed from your life? Well, as it turns out, not that much if you don't have Bill Murray at the center of your narrative.

Such is the case with Neverworld Wake, the latest—and first YA—novel from author Marisha Pessl. Centered around a group of five formerly close knit friends, whose relationships with one another were splintered following a mysterious death, Neverworld Wake mostly takes place in a limbo of sorts, as each of the main characters must face again and again the horrors that live within their pasts—and their minds. As in Groundhog Day, these friends wake up and find themselves inhabiting the same day over and over; their only promise of escape is almost too terrible to contemplate: They must unanimously determine which one person among them will live, while the other four die. It's an altogether eerie, philosophically challenging exploration of the ways in which our actions have consequences, even if we can't always see what they are right away, and it's the kind of book you'll tear through and then want to talk about with everyone you know immediately after finishing.

Recently, we sat down with Pessl (literally, we were sitting on blue velvet floor cushions), and talked about her novel, and then—for fun!—decided to use a Ouija board and see if we could talk to any authors who had already crossed over to the other side. Spoiler alert: Philip Roth was not super forthcoming, but you'll have to watch the video above to see what else happened, and read our Q&A below to get a better understanding of how humans can be so profound and yet so superficial all at the same time.

What was your original conception for this book?

I didn't really have any plan, necessarily, to write a young adult book at this point in my career. It was always something that I wanted to do at a later point, perhaps. But, it was really like, this gnawing idea that came into my head. So, I started working on it in secret, kind of in between working on my other novel. And, it really just took off. I've heard other authors talk about books writing themselves, and I was always very suspicious of this idea. But this book just really came very easily, and the premise of these five kids with a former, very close-knit friendship coming together and being stuck together in a very metaphysical way was really compelling to me.

As you mentioned, it's a Young Adult novel, and is your first foray into that genre. What makes a novel YA to you? How do you feel about those kinds of genre distinctions?

I came at Young Adult from my history as a reader. When I was growing up, books like The Outsiders, A Wrinkle in Time... I mean some of these classic books are those that carry with us through the ages. And that was really how I approached Young Adult, you know, through [books like] Judy Blume's Are You There God, It's Me Margaret? Like, books like that really informed me as a reader and hence as a writer. So, when I started writing in this world, I thought that there were going to be certain parameters, things that I could write and couldn't write. And, as it turned out, there are actually no rules in Young Adult. So, really the only thing that I changed—which comes back to how you were saying that you were glued to your seat—was I wanted to write a book that could be read in one sitting, and was this sort of full-throttle reading experience with the idea that I did not want my reader to get up from his or her seat. So, that is really the only change that I made in writing Young Adult. And, in the end it really is no change at all, and really the only distinction is the literal age of the protagonists. That's, I think, how the actual literary world is now making those distinctions.

It's just such a fascinating foundational time, that period of our lives; the memories from that age live with us for so long after we've moved on.

Absolutely. And I think it's been really interesting in my experience of how present those memories are to a really large section of the population. Some people never even get over these things. I mean, when you talk to people about their high school years, there's this certain passion and zest, there's some anger in there, too; there's a lot of regrets sometimes. So, it's amazing how we carry that particular time in a very emotionally shallow place, I think. So, that's why it's very exciting to write in that time because I'm very much able to get back into the mindset of who I was at that time. That's when books were especially important to me. That's where I experienced connection and a sense of the world at large, beyond my tiny town where I grew up. But it is really interesting, that psychology.

So much of the book is about the psychology of these five friends, and how they connect with one another, but there's a lot of other stuff going on too. How do you describe this book to someone who's never heard of it?

So, the basic plot is that five friends who were formerly very close in high school, it's a year after they've graduated and they've all completed their first year of college. Since high school, they've all drifted apart in different ways, and a lot of that had to do with the death of the sixth member of their group, this very charismatic boy named Jim. At the outset of the book, they return to this remote estate—so there's definitely some hints of Agatha Christie in there, another favorite author of mine—but they return to a remote estate for a reunion of sorts. They suffer a near-death experience, and as a result of that a stranger knocks on the door and announces that they're in a purgatory called the Neverworld Wake, and in order to free themselves from this limbo, they must do two things. One, they must come to a nearly unanimous vote as to who's gonna live and who's gonna die. And, they also must solve the murder collectively as to what happened to their friend Jim. So, obviously with this moment of being trapped, there is a certain psychology of grief. There's the anger, and then denial, eventual acceptance. So, I as an author had to shed, I felt very much like I was shedding layers of personality to see what's underneath. Because if you're trapped in this situation, it's like, you start digging through the human mind; and really the human mind is endless, so I had to interlay personality on top of that process.

Obviously, there will be some comparisons to Groundhog Day.

That is another amazing philosophical examination of time and personality and persona and all of these larger existential questions. Did you have any sort of specific philosophical principles in mind beforehand that you wanted to explore? Like, did you do any research specifically for this story, or was it was a more intuitive, natural thing?

I would say the writing process was very intuitive. I was drawn to the idea of being stuck, and, because in this day and age it's so easy to just float away from uncomfortable situations, the idea of being physically stuck, mentally stuck, and whether or not human beings would actually be able to come together in this particular situation [was compelling]. So a lot of it was very intuitive: setting up these characters and letting them just come to life. I did know the ending of the book, and I knew what each of them were hiding. But, beyond that, I would let them sort of try to annihilate each other.

In this particular case, I wanted to have characters who would really come into conflict with each other. It's almost like I was doing a human biosphere with a human experimentation in allowing, like my own Stanford Prison Experiment. So, I could see sort of how they would come into conflict with each other and how they would resolve that. So, that's really part of that initial world-building as a novelist, thinking who is really going to be the most dynamic personality in this particular situation. And also, what they're all trying to hide. And, I wanted to ask myself when people are thrown into this nearly impossible situation or outright impossible situation, do human beings come together or do they fracture and come apart? So, I think part of it was, this book was my trying to answer that question.

And I think another part of the book's mystery is in coming to terms with the knowledge that we're never going to know everything.

Yes, I mean absolutely. As a writer, I am in awe of the full spectrum of what it means to be human and all of those paradoxes and how good and evil plays out and just the layers of what it means to be alive. I think sometimes we forget about that, especially now with social media, and we're seeing everything in this two-dimensional screen. And I think our brain constantly is making these encapsulations of who people are and how they are, and are they good or are they bad? And, these are completely erroneous misconceptions of what it means to be alive. So, the book is very much a play on surface and what's underneath, and how we're all icebergs. And, there's the little tip that we show to everyone in our life, but there's so much happening under the surface. That's what makes human beings so fascinating, terrifying, wonderful and humbling, and that's why writing about human beings is an endless exploration because you never get to the bottom of a human being.

And superficial, too. So, we're everything.

NYLON sometimes uses affiliate links, through which we might earn a commission if you purchase something, but every product we write about is selected independently.