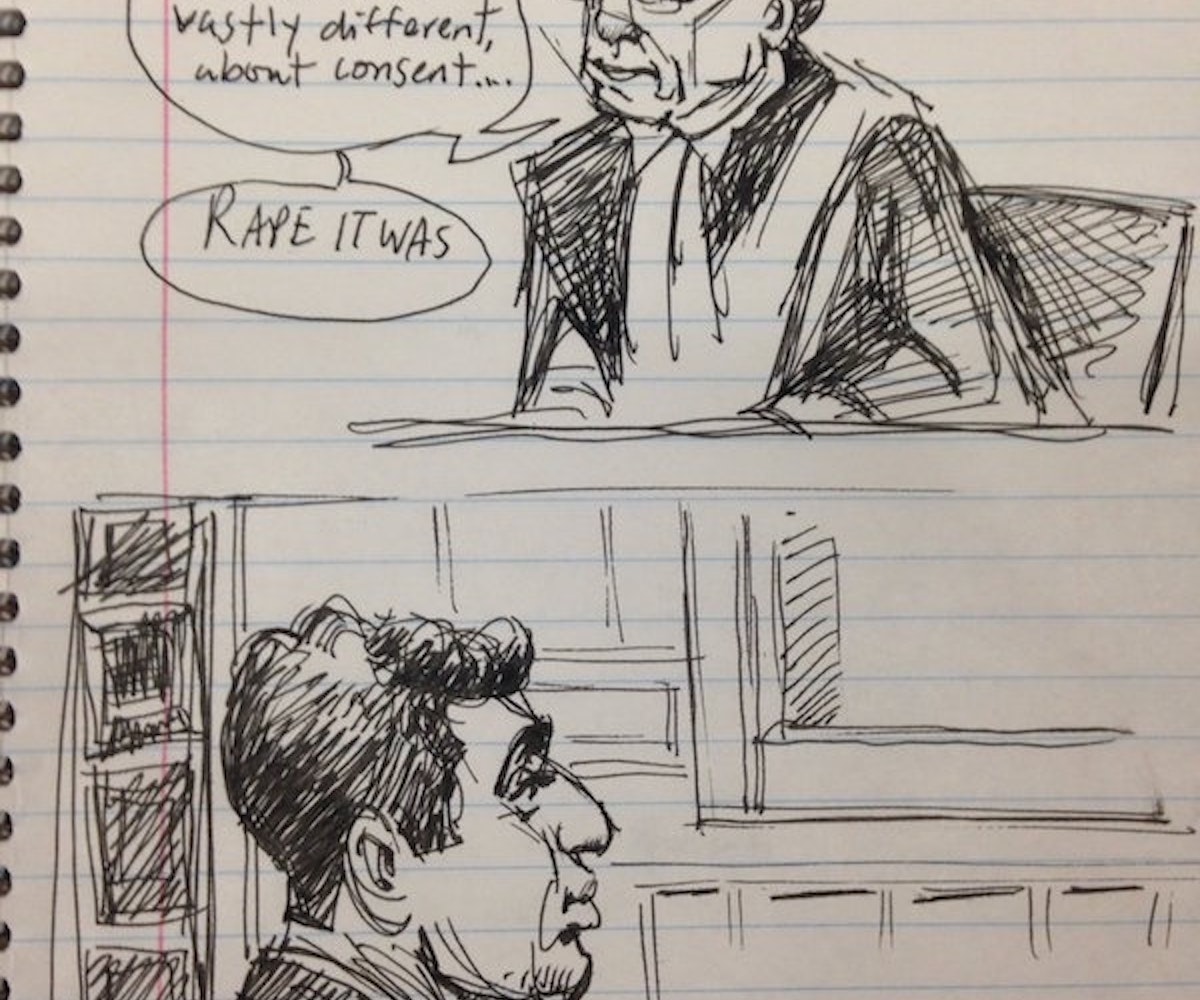 In his 179-page verdict, Ontario Court Justice Marvin Zuker railed against the myth of the "perfect rape victim" and blasted the prevalence and effects of victim blaming. In other words: finally.

Judge Zuker has been presiding over a rape case that occurred at York University in Toronto, in which student Mandi Gray accused fellow student Mustafa Ururyar of forcing her into oral sex and then raping her. Of course, the incident had all the familiar elements the defense had no problem preying on in order to discredit the victim: the fact that the two were casually dating; the fact that Gray had been drinking and had earlier texted Ururyar about wanting to have sex with him; the fact that Gray still chose to go home with him even when Ururyar began berating her and calling her a "slut" after they were leaving the bar; the fact that later that night when Ururyar broke up with her, he "consoled" her and they sex, which Ururyar's defense said was to "fulfill your text message"; the fact that she waited until morning to get a rape kit done and two days before she went to the police, and never mind the fact that Ururyar sent a text message a few days after the incident saying "I am sorry things went as they did. I shouldn’t have said and done some of the things I did. I was upset and felt wronged by you but that does not excuse my own mistakes." All of it was used by the defense to turn Gray into the woman scorned out to destroy Ururyar and his future.

Judge Zuker wasn't having any of it, saying in his epic defense that "for much of our history, the ‘good’ rape victim, the ‘credible’ rape victim has been a dead one." He goes on to decry Ururyar's "twisted logic" and, importantly said, "There is no demographic profile that typifies a rapist... No other crime is looked upon with the degree of blameworthiness, suspicion, and doubt as a rape victim. Victim blaming is unfortunately common and is one of the most significant barriers to justice and offender accountability... The responsibility and blame lie with the perpetrator who takes advantage of a vulnerable victim or violates the victim’s trust to commit the crime of sexual assault. Rape is an act of violence and aggression in which the perpetrator uses sex as a weapon to gain power and control over the victim. It is too common to redefine rape as sex and try to capitalize on the mistaken believe that rape is an act of passion that is primarily sexually motivated, It is important to draw the legal and common sense distinction between rape and sex... There is no situation in which an individual cannot control his/her sexual urges... It doesn’t matter if the victim was drinking, out at night alone, sexually exploited, on a date with the perpetrator, or how the victim was dressed. No one asks to be raped."

After the judge handed down his powerful verdict, Gray released her own statement, saying "I am tired of people talking to me like I won some sort of rape lottery because the legal system did what it is supposed to do." And, although she feels vindicated by the outcome, she also reminded people that this both doesn't relieve the trauma she went through and acknowledges that it is likely her privilege as a white, heterosexual, educated woman that even allowed her to go to trial. She also calls out the outrageous behavior of the defense and that while she appreciates the work of both Judge Zuker and the Crown attorney, says that "this should not be out of the ordinary in sexual assault cases... I will not congratulate the legal system, or the various courtroom actors for doing what they are supposed to do."

Gray is justified in her anger: It seems almost miraculous when a rape victim is believed, and like we should celebrate Judge Zuker's verdict because it is a rarity. There is no winner here. We should not have to say "finally" when, as Gray says, the legal system works as it should. Not when there are still so many women who never even have their day in court, when there are still Brock Turners. But we do, if not for anything else than to hope that this time, maybe we turned a corner.

Gray's full response is posted below and the full text of Judge Zuker's verdict can be read here.