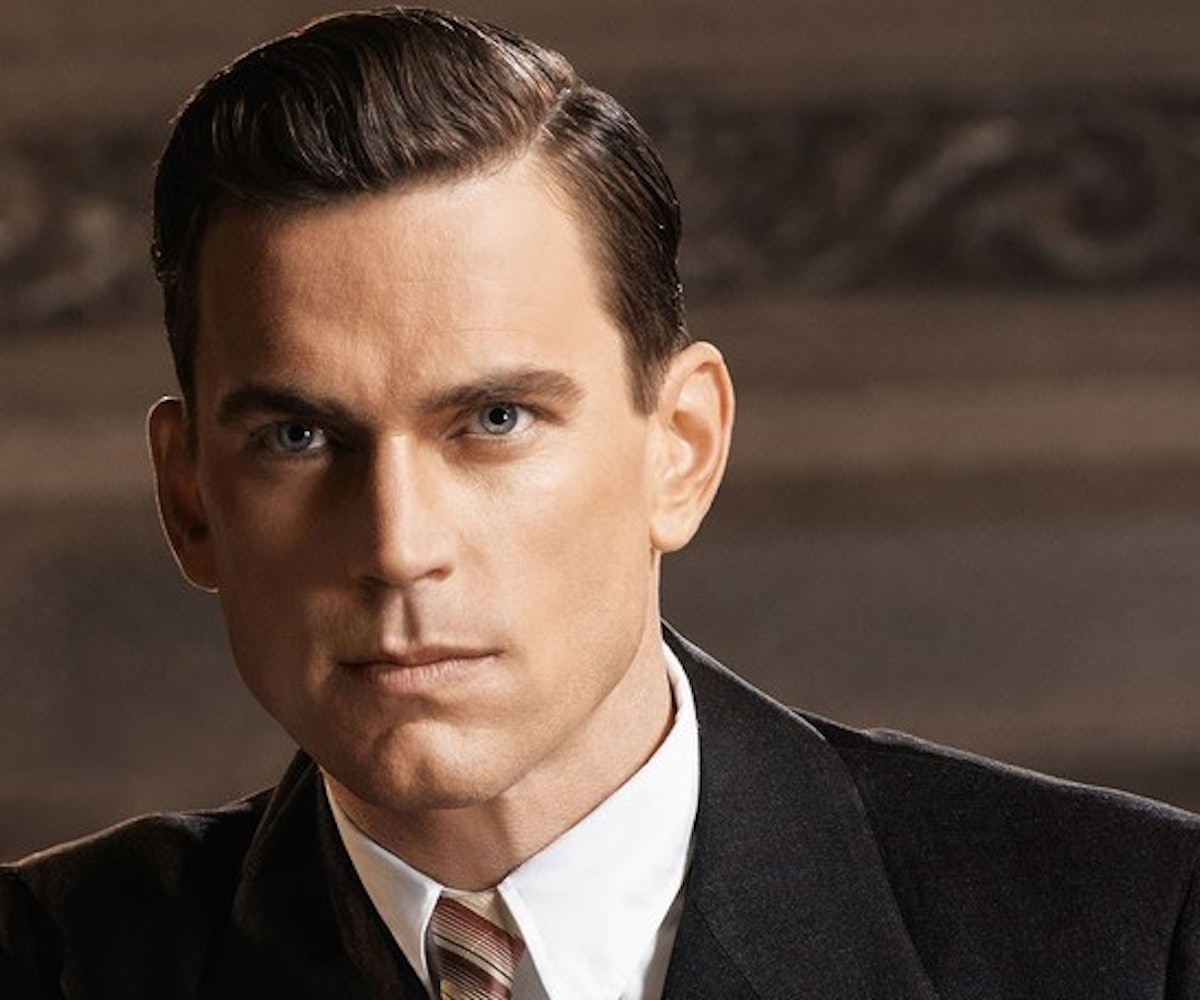 Matt Bomer, who was coming off six seasons as the lead on the USA drama White Collar, wasn’t necessarily looking to dive back into episodic television. But when the acclaimed writer and director Billy Ray, who had written Bomer’s debut feature Flightplan, came to him with the chance to lead Hollywood’s latest attempt at bringing the work of F. Scott Fitzgerald to the screen, it was an opportunity he couldn’t pass up. So here we are: Amazon has just released all nine episodes of The Last Tycoon, its latest foray into prestige drama. In the period piece, Bomer plays Monroe Stahr, a studio executive in Hollywood circa 1936 who is trying to navigate the shark-infested waters of the movie industry while struggling to cope with the recent death of his movie star wife. The series, which co-stars Kelsey Grammer and Lily Collins, is based on the final, unfinished work of Fitzgerald, who died before he could complete it. We spoke to Bomer last week about why he accepted the part, what the show can tell us about the America we live in today, and why he hopes that it can get even darker.

Doing a TV show is such a big commitment. Was there any hesitation in accepting this part?

Well, it came to me in a very serendipitous way. I had just recently read The Day of the Locust, the Nathanael West book, which was sort of a darker take on a similar time period and the underbelly of Hollywood. I was having the same debate we all have as actors from time to time of art versus commerce, and [thinking], Am I even going to get the opportunity to do commercial work? What will I do? How will I balance it out? I probably have that existential discussion with myself a few times a year, but Billy Ray has always been a very gracious person to me. And so we met, and he's a very intelligent man and a great pitch man, and I heard about his vision for this show, and it seemed like it had some gas to it. It seemed like it had some legs. I certainly wasn't necessarily looking to be a number one on a show and go right back into episodic work after having just done it for six years—seven years if you count American Horror Story. But I thought, Well, there's too much synchronicity in this for me not to want to be a part of it. I'm a huge F. Scott Fitzgerald fan, and when I heard about the creative team they had assembled, I was like, Well, if there's a team to put this together, it's those guys.

What do you think it says about our country that you can make a story set 80 years in the past and still explore themes that are very relevant today?

It's wild to me. And it was more and more revelatory as the shoot went on, that they were able to sneak in this social commentary that was as pertinent to 2017 as it was in 1936. I think it's crazy that the discussions about immigration, sexism, racism, and ageism are just as prevalent today. Even in terms of foreign markets having some control. I think that's something that the studios still deal with.

You mentioned art and commerce. Do you think that studios today have sort of forgotten about the art part?

No, not at all. I mean, it's always going to be commerce-driven because it's a business. It's about that bottom line. You can't fault anybody for that. It's a business. The people who used to write Kramer vs. Kramer are now writing Avengers: Age of Ultron, or whatever. That's why these Marvel movies are so amazing. I think the studios do a great job of also trying to get some art out there. It's art that they think will make money, but, you know, someone bought Moonlight and distributed it and tries to put things like that out there. Every studio has a shingle that really goes for those prestige films, meaning films that have some kind of artistic merit.

Do you see Monroe as an anti-hero? Because in the first episode, he comes off as fairly heroic.

Honestly, in perpetuity, I hope they'll go darker. That was really what I kind of imagined in my head, that those were the paths they were going to go down. Even with his faults, I don't think you ever really fault him. I mean, as someone who has been in episodic television for a while, I would love for that shadow to continue to expand, should the show continue. I want people to not like me. Not that I'm saying they do like me, but Monroe, I want him to be unlikeable, at times at least.

There's a character in this who says Hollywood isn't what she expected it was going to be. What were your first impressions of it when you first went there?

I remember the first time going out and screen-testing and realizing that on these lots and these little back rooms was where all these decisions were being made that involved so many people's futures for years and years to come. I liked being in New York because I was at a safe remove from it. I guess as time goes on, if you're fortunate enough to be able to make choices or meet with people, you realize that it's a business and you're a small part of that business. You may or may not bring something to the table for somebody, and you really have to balance the creative and the business.

Is it easy to sort of separate the business from your everyday home life?|

No. When I'm home with my family, yes, because we really separate church and state. We don't talk about business with the kids. We're just living life, and that's great. That's a safe haven. But L.A. is a factory town, so when I go to drop the kids off at school, I run into very influential people in the business. There's a surreality to it. But I think everyone's sort of smart and human enough to know not to bring weird social stakes to a PTA meeting. We just drop our guard and be co-parents.

I'm not going to lie to you: It's really fucking exhausting sometimes.

Mark Ruffalo said he cast you in the film Anything because he said you guys had a profound experience on set together [in The Normal Heart]. I'm wondering what he meant by that? What makes an experience profound in that way?

I think everybody involved in The Normal Heart knew that they had a tremendous responsibility in the story they were telling. Everybody gave it 150 percent and came to set prepared and ready to just do their best to serve the material. It was one of the more seamless creative experiences I've had. Everyone was just there and in it and then suddenly the cameras were rolling and it was being filmed. It wasn't like we were having a few laughs and all of a sudden they called, "Action," and I snapped into something.

Does it feel different doing something like that as opposed to The Last Tycoon, which feels more escapist?

I don't know. I feel like Monroe's experience in this is pretty heavy. At the same time, in Billy's vision, it was very much an internalized experience. He was supposed to represent someone who could have it all but still be kind of empty inside. So that's tough. You're also dealing with stylized language, double breasted suits that are tailored to your ribcage and you can't always breathe, and people who held themselves differently, carried themselves differently, spoke differently. So maybe should it go forward, I may feel more comfortable having more laughs in between, but it's tricky. You kind of need to stay somewhat close to at least the stylized nature of things. You don't have to be depressed all the time. I'm not quite at a place where I could just jump in and suddenly speak in the kind of language that was being provided.

All nine episodes of The Last Tycoon are being made available at once. Do you think bingeing a show like this is the right way to watch it?

It depends. There are some shows I can just binge-watch like candy, one after the other after the other. What was a show like that? I think I binge-watched all of Big Little Lies. I tried to watch as much of Feud as I could live, and what I couldn't see live, I tried to binge watch. And then there are some things like The Keepers, where I'm like, "I need a couple weeks between." I'm curious, but I need to kind of recover a bit from that before I enter into the next episode.